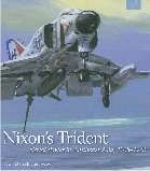 This booklet focuses on the three prongs of the naval trident that President Nixon wielded during the final years of the Vietnam War: naval air power, naval bombardment, and mine warfare. For much of this period, Navy aircraft sought to hamper the flow of supplies down the Ho Chi Minh Trail in Laos—a huge investment in air power resources that ultimately proved fruitless. After North Vietnam’s invasion of the South in 1972, however, Navy tactical aviation, as well as naval bombardment, proved critical not only in blunting the offensive but also in persuading North Vietnam to arrive at a peace agreement in Paris in 1973. For the first time in the war, the Navy was also authorized to close Haiphong Harbor and North Vietnam's other ports with naval mines—an operation that still stands out as a textbook example of how mine warfare can inflict a major economic and psychological blow on the enemy with minimal casualties for either side. Thus, naval power was indispensible to ending America's longest war.