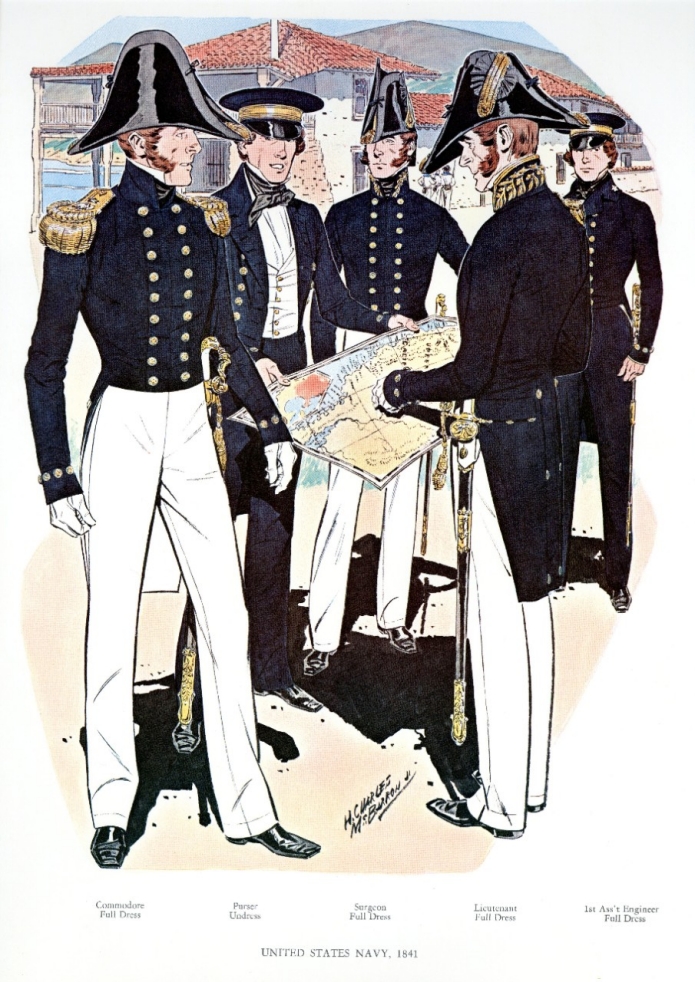 The uniform regulations of 19 February 1841 were the first to include a section on the dress of enlisted personnel. The section on the men was short and most general without a description of the clothing, so the previous uniforms, made up from physical samples to be seen at the navy yards, remained in use with only slight style modifications. The style of the officers’ full dress coat was changed and now buttoned across the chest, the buttons being in parallel rows. The undress coat was still the “frock” coat of a civilian pattern. Officers were permitted to wear either blue or white trousers, depending on the weather, and at the discretion of the commanding officer. The 1841 uniform was that of the campaign in California and the Mexican War, so there are many contemporary paintings of both officers and men.

The two senior officers, captains and commanders (the rank of master commandant had been changed to commander in March 1837) lost the elaborate collar embroidery of the 1830 instruction, while lieutenants retained it. Medical officers, who had had a corps device since 1830, showed no specialty mark on the collars of the full dress coat. Pursers did have a new device, a four inch long strip of embroidered oak leaves and acorns. To indicate the various classes of surgeons, the senior surgeon had three wide strips of gold lace on his cuffs in full dress, and quarter inch lace in undress. Passed assistant surgeons showed two strips of lace, and assistant surgeons, a single lace on the dress and undress cuffs. Since no other officers of the United States Navy had gold lace on their cuffs, in foreign ports, surgeons were often mistaken for the senior officers. In 1847 the lace was removed from surgeons’ cuffs and three sprigs of live oak were shown on both the collar and cuffs in full dress, the undress coat being without decorations.

The official instruction of 1841 stated, “A captain commanding a squadron entitled to wear a broad pendant, shall have on the strap of each epaulet a plain silver anchor and eagle, with a silver star above the eagle.” The epaulets of captains showed only the anchor and the eagle, while those for commanders and lieutenants had no devices. Until 1845 a lieutenant wore an epaulet on the right shoulder only. No other officers were permitted to wear shoulder ornaments. A system of rank indication in undress was initiated, the forerunner of the shoulder mark pattern of today. The shoulder straps of a commodore were blue, edged with gold and with a silver star in the center; for captains, the same strap without the star. Those for commanders and lieutenants were of gold lace. All straps were a half inch wide and two and a half inches long.

The decoration of the cocked hat for lieutenants can be noted in the painting and is similar to commodores and captains except with four bullions, the center two not twisted. The hats for other officers entitled to wear them had a loop of gold lace over the cockade, as shown on the surgeon’s hat. In undress a dark blue cap could be worn instead of the cocked hat. The band was gold lace for commissioned officers and midshipmen and blue for others. Midshipmen wore as a cap device, the anchor and star or the plain anchor as ordered for their coat collars. This was the first time a cap device was specified in the United States Navy.

Under the 1841 order white webbing sword belts were worn in full dress and black leather belts in undress. It is to be noted that the swords were supported by a frog and not by slings as they had been prior to 1841 and after the next order of 1852.

Although the 1841 uniform instructions are silent on the uniforms to be worn by engineers, a uniform had been approved in 1837 when the Navy manned its first sea-going steam vessel, the Fulton. The commanding officer, Captain Matthew C. Perry, with the approval of the Secretary of the Navy, issued instructions covering the dress of the specialists who would operate the ship’s engines. Engineers were to wear the undress uniform with an indication of their rating on the rolling collar. Chief engineers showed a gold embroidered five pointed star on either side of the collar, first assistants, silver stars, second assistants, a silver star on the right side only, and third assistants, a star on the left. Only chief engineers were permitted to wear cocked hats; all others wore caps. Although Congress made provision for engineers in the Naval Establishment in 1842, putting chief engineers in a commissioned status and directing that a suitable uniform be prescribed, no official action was taken by the Navy Department until the 1852 Regulations were issued.

The enlisted men in the background, near the Customs House in Monterey, are shown in the white uniform covered by the 1841 order. The white frock had a blue collar and breast, while the blue frock had a white collar, white cuffs and blue breast piece. In cold weather, a blue jacket was worn. The order also made provision for a sleeve device to indicate petty officers—an eagle and anchor, white on blue garments and blue on white frocks. Boatswains’ mates, gunners’ mates, carpenters’ mates, masters at arms, ships stewards and cooks wore the device on the right sleeve; other petty officers had the device on the left arm. Not until 1866 would a series of specialty marks for petty officers be introduced.