A Navy Tug Sunk off the Coast of San Francisco 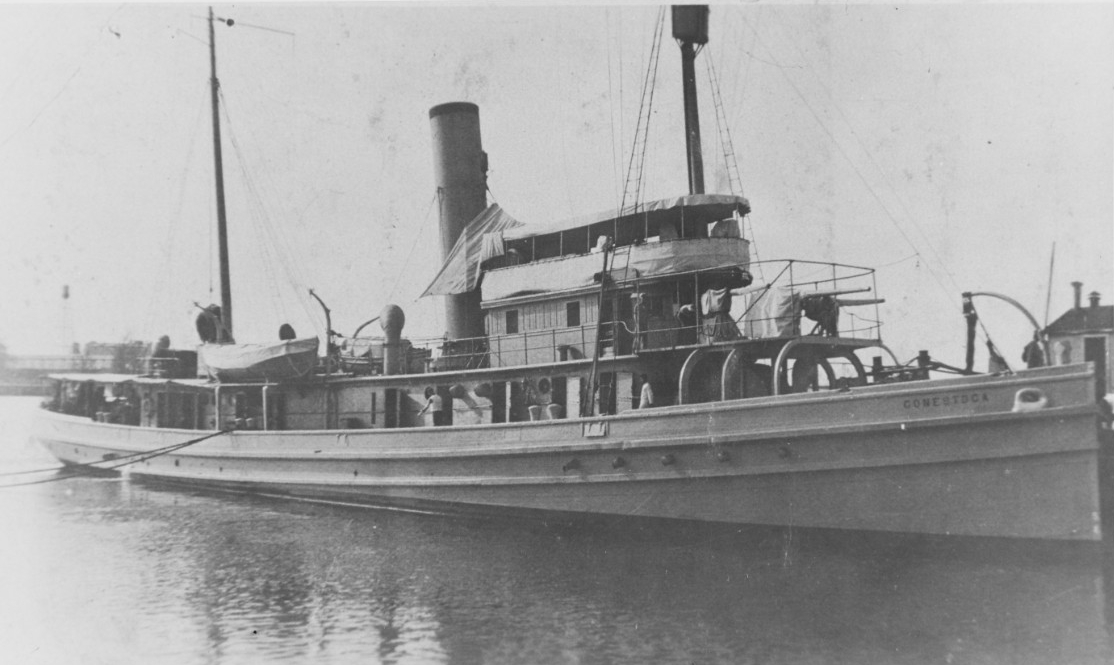 Conestoga was laid down in 1903 by the Maryland Steel Company at Sparrows Point, Maryland. She was officially launched on 12 November 1904 in Baltimore, Maryland. Prior to her naval service, Conestoga towed coal barges for the Philadelphia and Reading Railroad. She was acquired by the Navy on 14 September 1917 for use as a fleet tender and mine sweeper and assigned the identification number S.P. 1128. Conestoga was commissioned on 10 November 1917 with Lt. (j.g.) Carl Olsen, USNRF, in command.

Assigned to the Submarine Force and fitted out for distant service at Philadelphia, Conestoga carried out towing duties along the Atlantic coast, transported supplies and guns, escorted convoys to Bermuda and the Azores, and operated with the American Patrol Detachment in the vicinity of the Azores. At the end of the war, she was attached to Naval Base No. 13 (Azores), from which she towed disabled ships and escorted convoys until her arrival at New York on 26 September 1919. Assigned to harbor tug duty in the Fifth Naval District at Norfolk, Virginia, she was formally classified as a fleet tug, AT-54, on 17 July 1920 during the fleet-wide assignment of alphanumeric identification numbers.

Ordered to duty as a station ship at Tutuila, American Samoa, Conestoga underwent alterations and fitting out at Norfolk, and cleared Hampton Roads on 18 November 1920. She departed Norfolk with U.S. Navy Coal Barge YC 468 under tow. Reaching San Diego, California on 7 January 1921, she continued on to Mare Island, California on 17 February for voyage repairs, including work on her faulty bilge system. Conestoga, with Lt. Ernest L. Jones in command, three officers, and a crew of 52 men, then departed Mare Island on 25 March 1921 at 0900, bound for American Samoa by way of Pearl Harbor, Hawaii. She never arrived to her destination.

On 26 April 1921, it became evident that Conestoga was overdue in her arrival to Pearl Harbor despite miscommunication on April 6 that she had arrived safely. She was expected to arrive sometime near April 5, therefore officials presumed she had wrecked. A thorough search by ships and aircraft, utilizing the fleet at Pearl Harbor, off the Hawaiian Islands failed to locate either men or wreckage from Conestoga, leading the Commandant of the Fourteenth Naval District to conclude in a dispatch: "No trace of tug. Loss probable."

The steamship Senator came across a derelict lifeboat with a brass letter “C” on its bow on 17 May 1921 at 18º15' N, 115º42' W, some 650 miles west of Manzanillo, Mexico, and about 30 miles off Clarion Island. Although the lifeboat was found hundreds of miles away from the actual wreck location, currents could have pushed wreckage debris south. The identification number obtained from derelict vessel, M5535 B, did not match Navy Department records. The wreckage of the small boat was not recovered.

Despite extensive search efforts, Conestoga was never found. Due to the delay in the report of her loss, officials looked over two thousand miles away from her actual sinking location. Navy officials retroactively declared Conestoga ’s loss on 30 June 1921, with all 56 souls aboard lost.

Over 90 years after the loss of Conestoga, an August 2009 expedition through National Oceanic and Atmospheric Administration NOAA) Office of Coast Survey aboard F/V Pacific Star revealed a previously undocumented multibeam sonar target. The target appeared to be a wrecked tug near Southeast Farallon Island within the Greater Farallones National Marine Sanctuary. The Greater Farallones National Marine Sanctuary extends 3,295 square miles off the northern and central coast of California. Upon further investigation using remotely operated vehicles (ROV) during a September 2014 Maritime Heritage expedition aboard R/V Fulmar, researchers confirmed the target was a steel steam-powered tugboat that measured approximately 170 feet in length and 26 feet in beam. Archival research provided no clues to the identity of the tug beyond that of USS Conestoga.

As a potential U.S. Navy shipwreck, an Naval History & Heritage Command (NHHC) representative joined NOAA on a follow-up survey at the site in October 2015. Utilizing ROV, the survey provided further evidence towards the identification of the site as the wreck of USS Conestoga, one the Navy’s most mysterious losses. Given the features and dimensions of the wreck, including the presence of a 3-inch 50 caliber World War I-era gun, a steam-steered engine, and two Scotch marine boilers, archaeologists and researchers confirmed the wreck is that of Conestoga. Below is a photograph of the gun that helped identify the site. 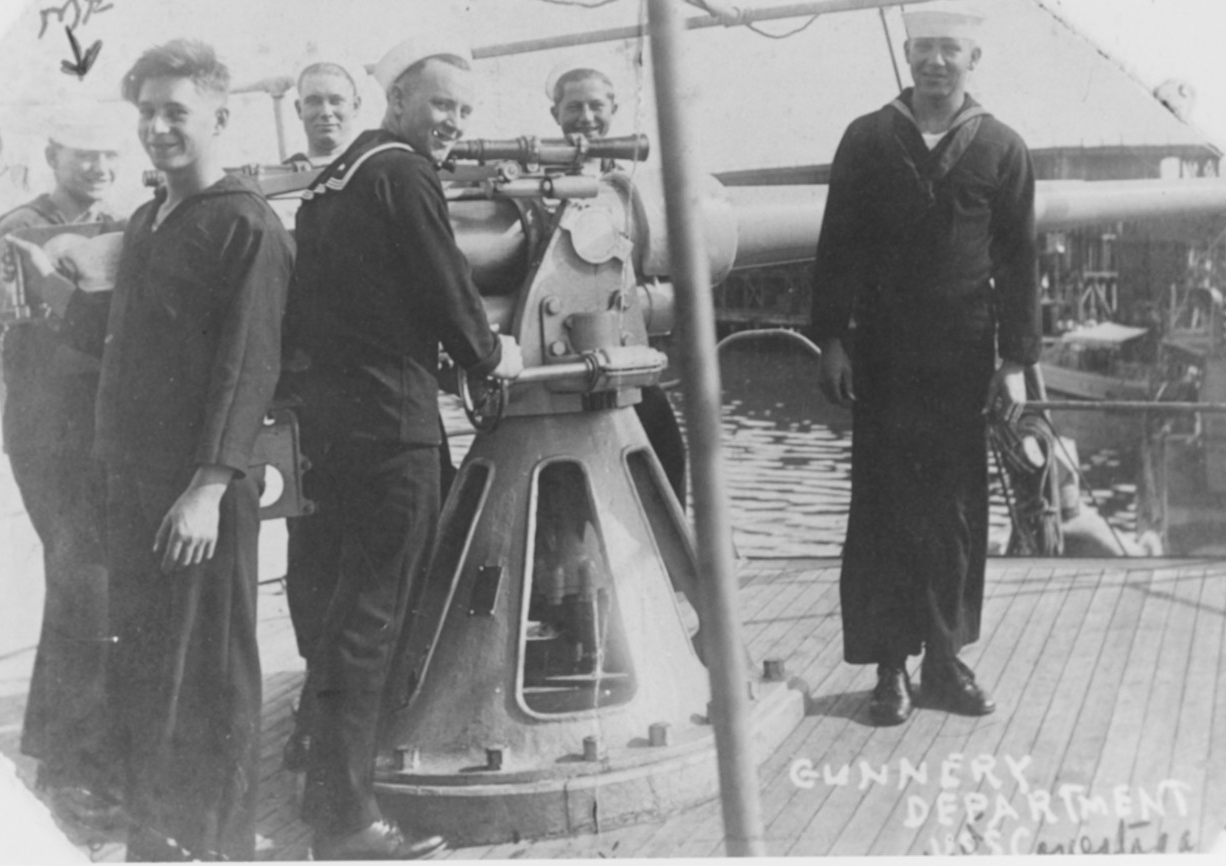 The wreck rests on an almost even keel with a slight list to port with a portion of her hull embedded in surrounding sediments. Most of the superstructure has collapsed into the hull, which is likely due to the effect of the surrounding environmental conditions upon the vessel’s wooden features.

Given the initial characterization of the site, Conestoga appears to have been lost suddenly. The position of the wreck suggests that Conestoga was headed in towards more protected waters, away from the damaging effects of open water seas and winds. Weather logs around the time of her departure from Mare Island reveal heavy seas and gale force winds. Under such conditions, Conestoga likely couldn’t efficiently pump water with a failing bilge system. The steering gear at the wreck site, including the rudder, also suggests that she may have lost the capability to steer during the storm.

Conestoga potentially towed a barge when she was lost, though this has not been confirmed. The wreck’s tow winch suggests Conestoga may have encountered a problem while under tow given the wire around the winch is twisted and not properly spun. The Navy’s publication of ship’s data from 1921 notes the loss of U.S. Navy Coal Barge YC-478 while being towed to Pearl Harbor, however, the date of this loss is not provided. While the wreck of USS Conestoga has been found, the circumstances surrounding her loss may never fully be known. USS Conestoga remains a grave for the 56 sailors lost when the tug sank and is protected from unauthorized disturbance under the Sunken Military Craft Act, as well as afforeded certain portections as a cultural resource within a NOAA National Marine Sanctuary. For more information about the discovery of USS Conestoga, visit For more information about the discovery of Conestoga, visit NOAA’s dedicated website using the links below.