Caption: Conestoga (AT-54) at San Diego, circa January 1921. Note name at bow, windscoops in the ports below the level of the main deck, and unusual clustered arrangement of her battery, forward of the foremast. (Naval Historical Center Photograph NH 71299, original courtesy of W. P. Burbage, 1970) 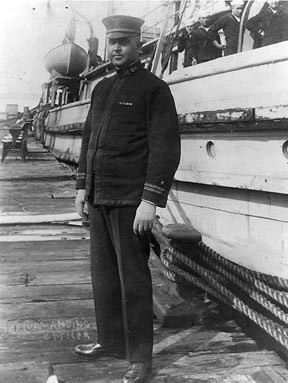 Caption: Lt. Ernest Larkin Jones, 41, Conestoga's last commanding officer, in a view taken circa January 1921, perhaps just after her voyage from the eastern seaboard, with sailors of his crew looking on at upper right. Note boat at upper left, with identifying "C" on her bows, and worn condition of the strake along the hull. (Naval Historical Center Photograph NH 71504, original courtesy of W. P. Burbage, 1970)

The Navy retained the original name of this ship after her acquisition.

The second Conestoga, built in 1904 by the Maryland Steel Co., Sparrows Point, Md., was acquired by the Navy on 14 September 1917 from her owners, the Philadelphia and Reading Transportation Line, for use as a fleet tender and mine sweeper and assigned the identification number S. P. 1128; and commissioned on 10 November 1917, Lt. (j.g.) Carl Olsen, USNRF, in command.

Assigned to the Submarine Force and fitted out for distant service at Philadelphia, Conestoga carried out towing duties along the Atlantic coast, transported supplies and guns, escorted convoys to Bermuda and the Azores, and operated with the American Patrol Detachment in the vicinity of the Azores. At the end of the war she was attached to Naval Base No. 13 (Azores), from which she towed disabled ships and escorted convoys until her arrival at New York on 26 September 1919. Assigned to harbor tug duty in the Fifth Naval District at Norfolk, Virginia, she was formally classified as a fleet tug, AT-54, on 17 July 1920 during the fleet-wide assignment of alphanumeric identification numbers.

Ordered to duty as station ship at Tutuila, American Samoa, Conestoga underwent alterations and fitting out at Norfolk, and cleared Hampton Roads on 18 November 1920 with U.S. Navy coal barge YC-468 in tow. Reaching San Diego, Calif., on 7 January 1921, she continued on to Mare Island, Calif., on 17 February for voyage repairs. Conestoga, Lt. Ernest L. Jones in command, with a crew of three warrant officers and 52 enlisted men, then sailed, with a different coal barge, YC-478, in tow, from Mare Island on 25 March 1921. She never reached her destination. The steamship Senator came across a boat with a brass letter “C” on its bows on 17 May 1921 at 18º15' N, 115º42' W, some 650 miles west of Manzanillo, Mexico, and about 30 miles off Clarion Island, but the identification number obtained from the waterlogged craft, M5535 B, did not match Navy Department records for a boat of that kind. A thorough search by ships and aircraft of the islands in the vicinity failed to locate either men or wreckage verifiable as having come from Conestoga, leading the Commandant of the Fourteenth Naval District to conclude in a dispatch: "No trace of tug. Loss probable." On 30 June 1921, the Navy declared Conestoga lost with all 56 souls.

In 2014, however, the National Oceanic and Atmospheric Administration (NOAA) conducted a survey on a multibeam sonar contact thought to be a shipwreck in the waters of the Greater Farallones National Marine Sanctuary off San Francisco, Calif.  Three survey dives with an ROV revealed the wreck to be that of an oceangoing tug, and certain diagnostic features -- notably a deck gun -- led the investigators to believe that that was a naval vessel, possibly Conestoga.  Consultation with the Naval History and Heritage Command (NHHC), further research, and another investigation in the autumn of 2015 with NHHC participation confirmed that assessment.