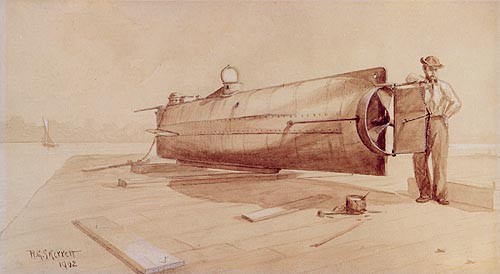 The Confederate submersible H. L. Hunley has the distinction of being the first submarine to sink an enemy warship in wartime. Although the boat and its crew were lost as a result of this endeavor, the success of their mission proved that this new style of naval warfare would be an inevitable course of future development.

The Boat
Privately built in 1863 by Park and Lyons of Mobile, Alabama, with the financial backing of Horace Lawson Hunley, the submarine was constructed from rolled iron boiler plate with custom cast iron fittings. It was powered by a hand crank operated by a crew of seven, with an eighth member to pilot the boat. Each end was equipped with water ballast tanks that could be flooded by valves or pumped dry by hand pumps. With many of the features that would become standard in later submarines, including diving planes and raised conning towers, the boat is a prime example of the American technological ingenuity that characterized the Civil War period.

The Sinking
On 17 February 1864, after months of practice runs and weather delays, the Confederate submarine, under cover of darkness,  silently approached USS Housatonic, a 16-gun, 1,240-ton sloop-of-war, on blockade duty four miles off the entrance to Charleston Harbor, South Carolina. Carrying a torpedo packed with explosive black powder bolted to a 16-foot spar, H. L. Hunley rammed Housatonic below the water line, detonating the torpedo, tearing a hole in the Union ship’s hull and sending her to the bottom along with five of her crew. Hunley was not seen again for over a century.

The Wreck
The search for Hunley ended 131 years later when best-selling author Clive Cussler and his team from the National Underwater and Marine Agency (NUMA) discovered the submarine after a 14-year search. At the time of discovery, Cussler and NUMA were conducting this research in partnership with the South Carolina Institute of Anthropology and Archaeology (SCIAA). The team realized that they had found Hunley after exposing the forward hatch and the distinctive ventilator or snorkel box, used for refreshing the air inside. The submarine rested on its starboard side at about a 45-degree angle and was covered in an encrustation of ferrous oxide bonded with sand and shell particles. Probing revealed an approximate length of 34 feet with most, if not all, of the vessel preserved under the sediment.

The Recovery
Due to concerns that the historic vessel would be disturbed or damaged now that its location was known, the decision was made to raise Hunley from its resting place. In the summer of 2000, a large team of professionals from the Naval History and Heritage Command's Underwater Archaeology Branch, the National Park Service, and SCIAA excavated the site, measuring and documenting the hull prior to preparing it for removal. Once the on-site investigation was complete, customized slings were slipped underneath the sub one by one and attached to a truss designed by Oceaneering, International, Inc. The truss was then hoisted from the murky waters by crane from the jack-up barge Karlissa-B. On August 8 at 8:37 a.m., the sub broke the surface for the first time in over 136 years where it was greeted by a cheering crowd in hundreds of nearby watercraft. Once safely on its transporting barge, Hunley finally completed its last voyage back to Charleston, passing by hundreds of spectators on the city's shores and bridges. The recovery operation came to an end when the submarine was secured inside the Warren Lasch Conservation Center, now part of the Clemson University Restoration Institute, in a specially designed tank of fresh water to await conservation. All who viewed the vessel said Hunley incorporated an unexpectedly graceful and beautiful design. It is certainly a marvel both for its time period and for modern day researchers.

Further Reading
For more information, see the U.S. Navy Library's collection of original documents on the sinking of Housatonic. Below are links to research published by UAB, including the archaeological report for the 2000 project H. L. Hunley: Recovery Operations, the 1996 paper "H. L. Hunley in Historical Context" by archaeologist Richard Wills, and "Science Meets History: Incident Analysis of H. L. Hunley," a summary of a joint study with Naval Surface Warfare Center Carderock on the explosive effects of Hunley's torpedo. A collection of photos of the recovery can also be found below, along with the online exhibit "A View from the Periscope" on the history of submarines by the Navy Art Gallery