Jacob Jones (DD-61) was a Tucker-class destroyer laid down by the New York Shipbuilding Corporation in Camden, New Jersey, on 3 August 1914, just over a month after the start of World War I. On 29 May 1915 the ship was launched, sponsored by Mrs. Jerome Parker Crittendom, the great-granddaughter of Commodore Jacob Jones. The next year, on 10 February 1916, USS Jacob Jones was commissioned with Lieutenant Commander W. S. Pye in command. 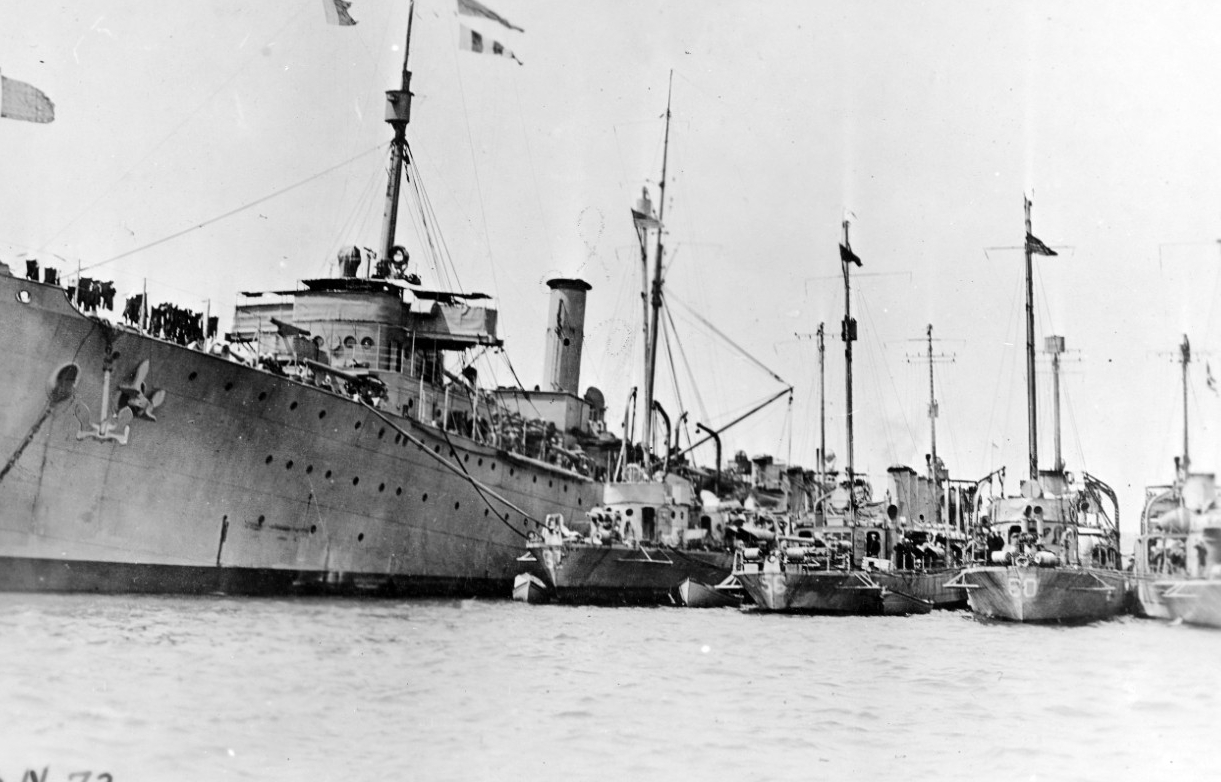 Service during World War I

When war broke out between the United States and Germany on 6 April 1917, Jacob Jones was patrolling off the Virginia coast. But on 7 May, she departed Boston for Europe, boasting 4 x 4” (102 mm)/50-caliber guns and 8 x 21” (533 mm) torpedo tubes. She had two Curtis steam turbines which delivered 17,000 shaft horsepower to two screw turbines in addition to a third turbine used solely for cruising purposes. Her top speed was 30.32 knots (56.15 km/h), and she carried a crew of five Wardroom Officers, nine Chief Petty Officers, and 87 men. Ten days after departing from Boston, Jacob Jones arrived at Queenstown, Ireland, and began patrolling and escorting convoys in waters off the United Kingdom.

She performed several notable rescue operations throughout 1917 while escorting supply convoys through submarine-infested waters. On 8 July she picked up 44 survivors from British steamship Valetta, which had been the victim of a U-boat. Later that same month, Jacob Jones sighted a periscope while escorting British steamship Dafila, but a torpedo hit the steamship before Jacob Jones could attack. She was able to rescue 25 survivors from the sinking Dafila. Later, she picked up 305 survivors from torpedoed British cruiser Orama while conducting special escort duty between Ireland and France. 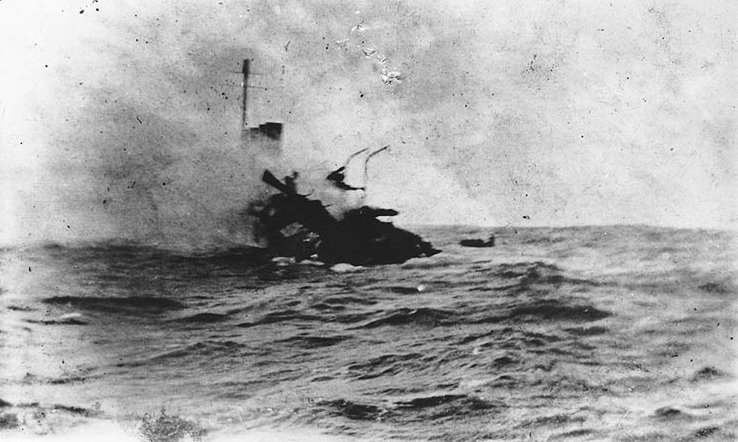 Caption: USS Jacob Jones sinking off the Scilly Islands, England, on 6 December 1917, after she was torpedoed by the German submarine U-53. Photographed by Seaman William G. Ellis. Smithsonian Institution Photograph.

On 6 December 1917, Jacob Jones departed Brest, France, to return to Queenstown, Ireland. At 16:21 she sighted a torpedo wake at a thousand yards while steaming independently 25 miles southeast of Bishop Rock, Scilly Islands, and 20 miles east of Start Point, England. She maneuvered to escape, but the torpedo struck her starboard side three feet below the water line, rupturing her fuel oil tank located below the auxiliary and engine rooms. As the stern sank, the depth charges exploded and Commander David W. Bagley ordered all life rafts and boats launched and the ship abandoned. Two shots were fired from the No. 4 four-inch gun in the hopes that a nearby vessel might hear it and come to the ship's rescue. Eight minutes after being struck by the torpedo, Jacob Jones sank with 2 officers and 62 men still onboard.

The ship’s survivors floated on rafts, boats, and debris in frigid north Atlantic waters off the southwest coast of England. Three rafts were launched before the ship sank and another floated off when she sank. The motor dory, with engine out of commission, floated off, but two small boats remained afloat in the survivors' vicinity, one damaged beyond usefulness and the other leaking badly. Survivors used the second small boat to transport men to the rafts. An attempt was made to launch the whale boat, but it had been damaged by the explosion and capsized soon after being set afloat. The commander of attacking U-53, Kapitan Hans Rose, surfaced and took prisoner two badly-wounded survivors, Albert De Mello, Seaman second class and John Francis Murphy, Ship's cook second class petty officer. Kapitan Rose also radioed the approximate location and drift of the survivors to the American base in Queenstown, only requesting that the rescuing ships give him an hour to leave the vicinity.

Meanwhile, Lieutenant, junior grade, Stanton F. Kalk, the officer-of-the-deck when the torpedo struck, began helping men out of the water and evenly distributing them into the life rafts and boats. He died of exhaustion and exposure, and was posthumously awarded the Navy Distinguished Service Medal. The other officer killed was Gunner Harry R. Hood. Chief Boatswain’s Mate Harry Gibson (posthumously) and Chief Electrician’s Mate L. J. Kelly both received the Navy Cross as well as letters of commendation along with Chief Boatswain’s Mate Charles Charlesworth. Through the night of 6–7 December, British sloop-of-war Camellia and British liner Catalina conducted rescue operations. At 08:30 on 7 December, HMS Insolent picked up the last survivors of Jacob Jones. Out of the 7 officers and 103 men on board at the time of the attack, 64 men lost their lives. Almost all of the survivors suffered from shock and exposure at the time they were rescued, and one officer and thirteen men were injured badly enough to be put on the sick-list later. 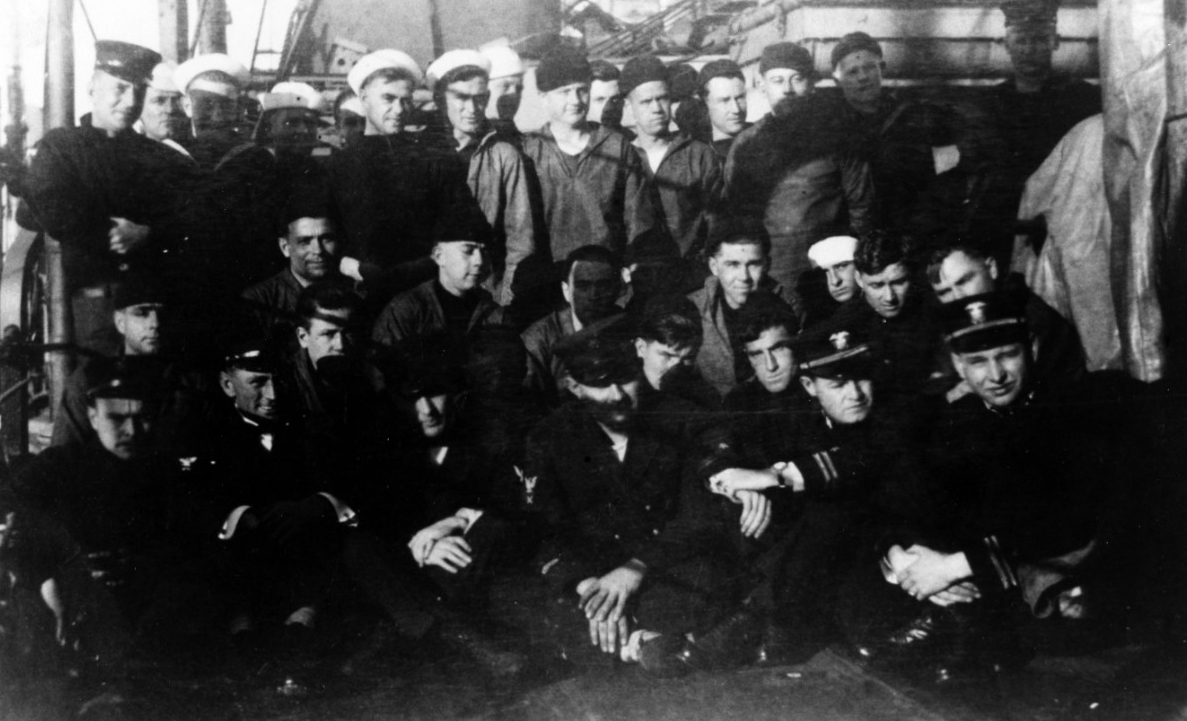 Jacob Jones retains significance as the first U.S. destroyer ever to be lost to enemy action. After over a century since its loss, its final resting place has yet to be found. A second Jacob Jones destroyer, DD-130, was laid down at the New York Shipbuilding Corporation at Camden, New Jersey, on 21 February 1918 and launched on 20 November 1918 with sponsorship from Jacob Jones’s great-granddaughter Mrs. Cazenove Doughton. That ship was sunk on 28 February 1942 by a U-boat in World War II. Two destroyers were named after Lieutenant Kalk, DD-170 and DD-611. A frigate, DE-1069, was named after Commander Bagley—who retired from military service as an admiral—along with his brother, Ensign Worth Bagley, who holds distinction as the only U.S. naval officer killed in action during the Spanish-American War.

Lieutenant Commander David Bagley's Report on the Sinking of the Jacob Jones, 12/10/1917

The Sinking of Jacob Jones: Toughness and Sacrifice in the North Atlantic by Matthew Cheser, NHHC