On 6 June 1944, American, British, Canadian, Free French, Polish, Norwegian, and other nationalities in the Allied Expeditionary Force, set to invade Normandy. Within 24 hours, the Allies transported 175,000 troops and their equipment, including 50,000 vehicles of all types, across 60 to 100 miles of open water to assault a well-fortified German beachhead. Dubbed Operation Overlord, Winston S. Churchill called this "the most difficult and complicated operation to ever take place." Yet, for all the difficulties and all the German advantages, the Allies successfully exercised a decisive edge, the control of the sea and air, which gave them unprecedented mobility.

At the end of the day, the allied invasion front stretched across more than 90 kilometers of beachhead. The Atlantic Wall, which took the Germans four years to construct and absorbed a large percentage of German material and manpower, fell in only one day. However, Allied penetration of the Atlantic Wall was a costly task that resulted in nearly 5,000 casualties. Accurate material losses have yet to be calculated; however, by D-Day plus one, the widespread wreckage of landing craft and motor vehicles along the Omaha beachhead suspended landing operations. The American journalist Ernest Taylor Pyle, one of the most famous war correspondents of World War II, referred to the Omaha beachhead as a shoreline museum of carnage.

The Naval Historical Center (NHC) is the official history program of the U.S. Department of the Navy. The NHC's mission is to enhance the Navy's effectiveness by preserving, analyzing, and interpreting its hard-earned experience and history for the Navy and the American people. In accordance with the National Historic Preservation Act (Section 110[a][1] and Section 110[a][2]), the Secretary of the Interior's "Standards in Archaeology and Historic Preservation" and SECNAVINST 4000.35, the NHC is working to fulfill its preservation responsibilities for historic and archaeological resources.

The NHC's project objectives are multi-fold. Foremost, obtain additional information on U.S. Navy losses during operation Neptune, the naval portion of Overlord, through remote sensing data collection. Second, create an NHC planning document to assist the management and preservation of the associated cultural resources. The information assimilated into NHC's planning document, is to provide future research baseline data for the evaluation of site significance.

The research goals are designed to achieve the overall project objectives. First, locate and confirm the existence of wrecks associated with operation Neptune. Second, provide identification and an indication of the state-of-preservation for each wreck site. Third, determine if the remote-sensing data can be characterized to differentiate between wrecks, coastal defenses and ordnance. Lastly, identify the authorities and agencies that have an interest in the preservation of these possibly significant resources and make the appropriate recommendations. 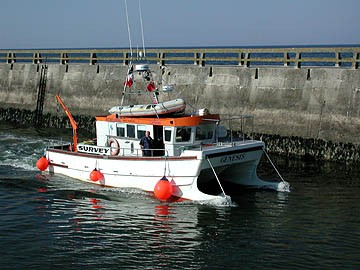 HYPACK® MAX contained the software tools necessary to process the raw magnetic data files. Sea Scan® PC Review software provided the tools necessary to process the acoustic data. Between FS 2000-2001 the NHC processed more than 1,900 magnetic anomalies and 752 sonar targets. As part of the data analysis, the NHC established guidelines to the selection process used to recommend and prioritize the magnetic and acoustic data. This selection process did not focus on complex magnetic anomalies with a high-amplitude or an associated side-scan sonar target. Instead, the process established an accurate method of setting priorities for each target according to the historic potential. In addition, as part of the processing and selection task, significant magnetic data and compelling sonar images were added into ArcView© GIS (Version 3.1). Development of the Arc View© GIS database allows, as part of the data analysis, a selection process to recommend and prioritize magnetic anomalies, anomaly clusters, and associated side-scan sonar targets. 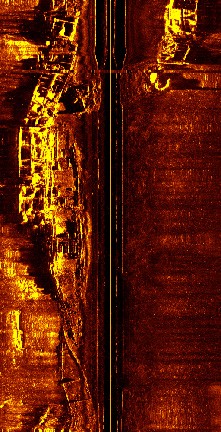 Caption: Figure 2: A side-scan sonar record of the American Mulberry Group at St-Laurent-sur-Mer.

In addition to providing valuable site data, FS 2000 allowed the UA to sort out logistical difficulty shipping/receiving and operational constraints such as tidal lock schedules and high velocity currents. In addition, it became apparent that UXO could affect the ROV operations planned for FS 2001.In FS 2000 (June-July), the UA and INA completed offshore segments of Utah Beach (401 hectares), Point du Hoc (158.7 hectares), and Omaha Beach (1,390 hectares). During this first season, the UA and INA documented more than 440 magnetic anomalies and 312 sonar targets. One target proved to be an intact Landing Barge Vehicle (LBV) designed to carry vehicles. The LBV would have been associated with Landing barge squadrons X and Y, Force U, US 7 Corps (33rd and 34th Supply and Repair flotilla and the 8th, 19th, and 20th LBV). 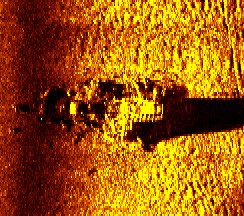 Caption: Figure 3: This side-scan sonar record shows what little remains of the Tide.

In FS 2001 (May-June), the UA returned to Normandy and completed the near-shore (shallow water) segments of Utah Beach (605.6 hectares), Point du Hoc (226.5 hectares), and Omaha Beach (570 hectares), shoreward of the caisson breakwater (Figure 2). In addition, the NSWC group assisted UA to examine sites at Utah (six sites, including one intact LBV), Point du Hoc (one LBV), and Omaha (15 sites including three Double Duty [DD] tanks). The UA and NSWC also documented the remains of five known sites (USS Corry (DD 463), USS Meredith (DD 726), USS Rich (DE 695), USS Tide (AM 125), and, LST 523).The LBV off Point du Hoc could be the remains of a supply boat that swamped while carrying reserve ammunition for US Army companies D, E, and F of the 2nd Rangers. The landing ship tank (LST) 523 investigated off Utah Beach revealed substantial impact at mid ship section. While investigations of the Tide, attached to Minesweeper Squadron A, Utah area, revealed that previous French salvage operations removed its remains due to hazardous unexploded ordnance (Figure 3).

Unexploded Ordnance encountered during the FS 2001 season included numerous shell casings typically found lying against the outside of the sunken Sherman M4s, reams of small arms ammunition lying exposed on the seabed and one glass ampoule containing either acid (fuse) or iodine (medicinal) (Figure 4). 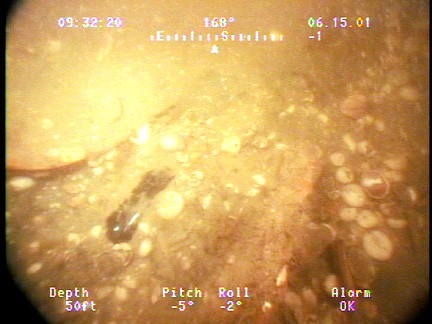 The data collected during FS 2000 and 2001 revealed important information about site preservation and integrity. Sonar imagery and video documentation revealed that a majority of the sites was subjected to substantial impacts during post war salvage operations. A local informant and salvage operator, Jacques Lemonchois, verified that the French government let contracts to remove vessels deemed an obstruction or hazardous due to unexploded ordnance (Figure 5). Leomonchois began clearing some of the wrecks deemed dangerous in 1970. In addition, Lemonchois established the Musee de Epaves, Sous-Marines Du Dubarquement dedicated to Operation Neptune. 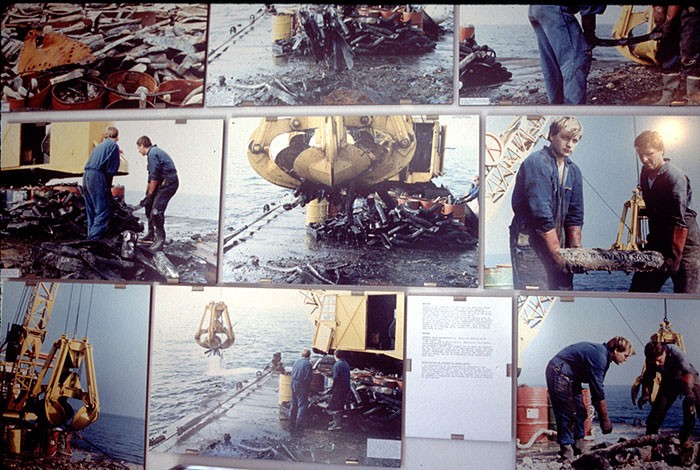