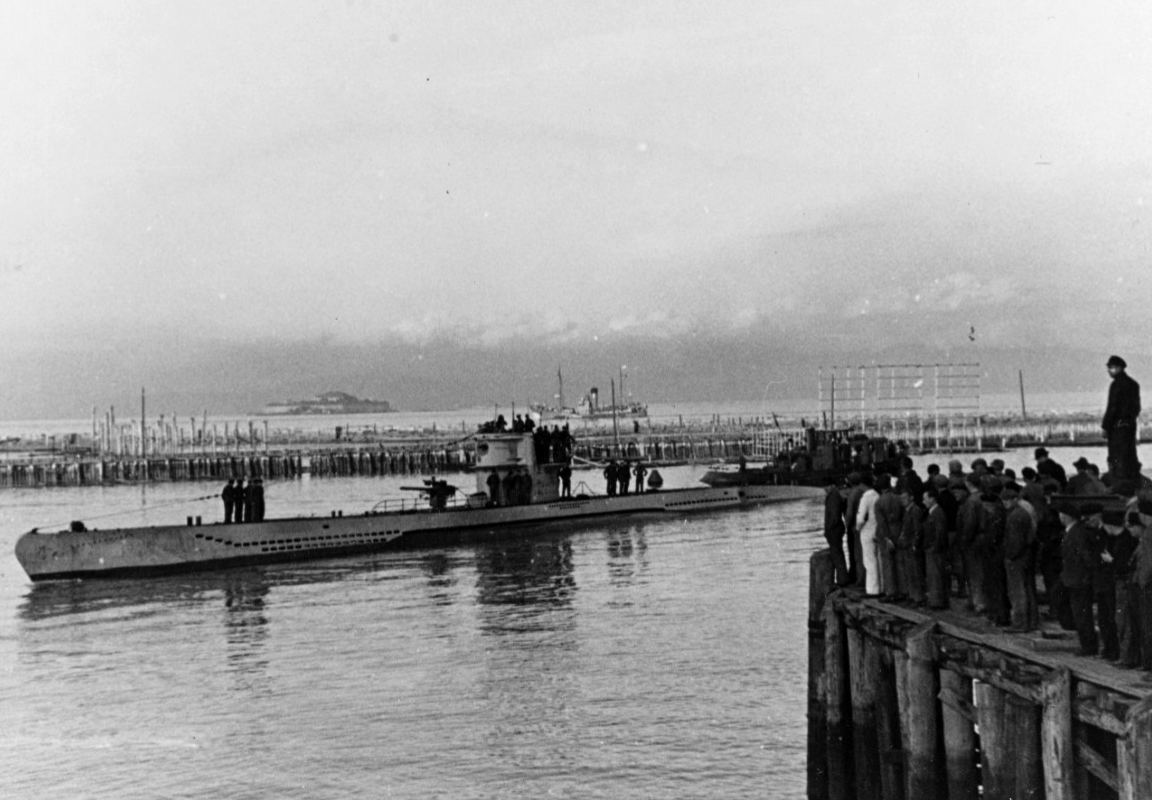 U-1105, a modified Type VII-C German submarine, was built at the Nordseewerke Shipyard, Emden, Germany, and commissioned into the Kriegsmarine on 3 June 1944. It was one of less than ten submarines that the Germans outfitted with an experimental synthetic rubber skin designed to counter Allied sonar devices. Codenamed "Alberich," this top-secret rubber coating process ultimately contributed to the ship's survival under extreme combat conditions and earned it the name "Black Panther." For this reason, a black panther sprawled across the top of the globe was painted on U-1105's conning tower.

In the spring of 1945, the submarine patrolled Allied convoy routes near Black Rock, Ireland. In April, U-1105 escaped detection by an Allied destroyer patrol. Days later, the U-boat detected three British destroyers that were part of the Second Division of the 21st Escort Group. The submarine fired two acoustic torpedoes and then dove to 100 meters to escape a counterattack. Fifty seconds passed before the first torpedo struck, with the second hitting just moments later. Thirty-two crewmen from U-1105's victim, HMSRedmill, were lost. The Allied search for U-1105 and the search for Redmill's survivors began immediately. The submarine, unable to maintain its 330-foot depth, sank to the bottom at 570 feet, remaining motionless. For the next 31 hours, the Allied squadron searched for the U-boat without success. U-1105 evaded detection for the remainder of the war.

On May 4, U-1105 received the last order from Grossadmiral Karl Donitz: the war is over. Ironically, the submarine surrendered to the 21st Escort Group, the same escort group it attacked just a few weeks earlier. Ordered to the surface, the submarine proceeded to the Allied base at Loch Eriboll, Scotland on 10 May 1945 to surrender. U-1105 sailed under armed frigate and air escort along with other surrendered U-boats, through the North Minch, northwest of Scotland, to the British naval base at Loch Alsh, in western Scotland, then across Inner Seas to Lishally, Northern Ireland. At Lishally, U-1105 was turned over to the United States as a war prize for study of its unique synthetic rubber skin.

In 1946, the U-boat arrived in Portsmouth, New Hampshire. The Naval Research Laboratory in Washington, D.C., and Massachusetts Institute of Technology's Acoustic Laboratory in Cambridge, Massachusetts, conducted research on its unique rubber-tiled skin. After the research was completed, the boat was used for explosives testing. On 19 September 1949, U-1105 went down one last time in more than 91-feet of water landing upright, its pressure hull cracked open by the explosion all the way around to the keel. Little evidence was left to mark the wreck, so for the next 36 years the submarine was lost to history.

On June 29 1985, the wreck of U-1105 was discovered by a team of sport divers led by Uwe Lovas, approximately one mile west of Piney Point, Maryland. In November of 1994, it was designated as Maryland's first historic shipwreck preserve. The program, the first of its kind in the state, was designed to promote the preservation of historic shipwreck sites while making them accessible to the general public.

Between April and December, a blue and white buoy marks the lower gun deck of the wreck. The conning tower rises to within 68 feet of the surface. The wood covered main deck fore and aft of the conning tower is occasionally exposed by the drifting silt beds. The wreck is well preserved, and largely intact. Seasonally, thick layers of marine growth appear and then disappear on the site, often covering structural features.