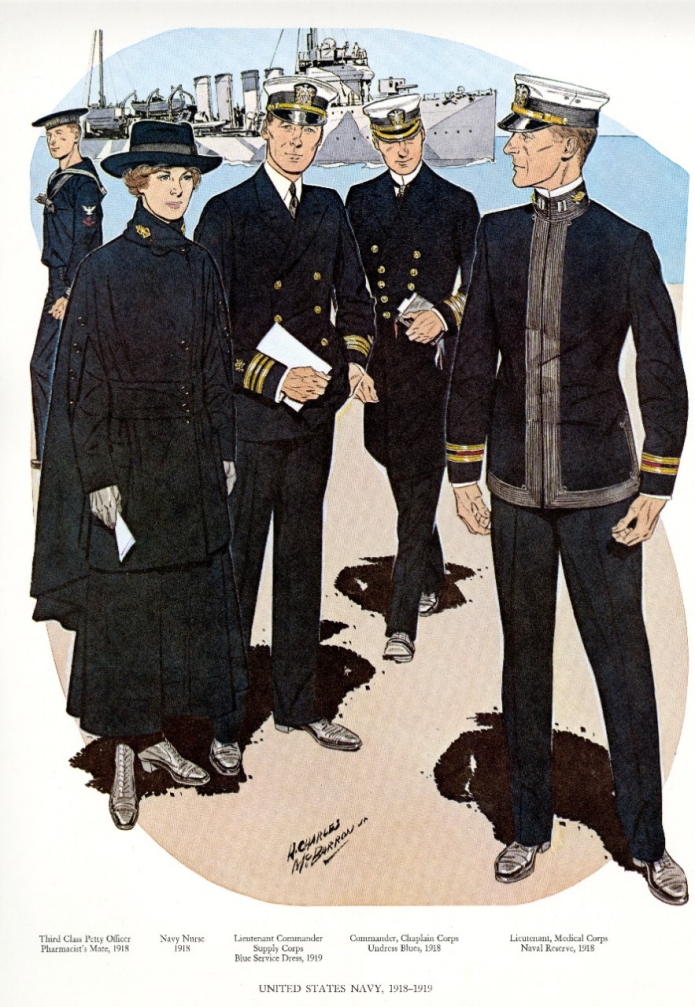 In time of war, there are always changes in military dress, and during the period of the first World War, the dress of the Navy of the United States was no exception. The incorporation of reserve personnel into active service, the changing weapons of war, the influence of the dress of our allies and the changing styles of civilian clothing are all reflected in the many official modifications of the Navy Uniform Regulations of 1913. The changes were so volumious in the first years of the order’s existence that a revised edition was issued on 20 January 1917. Changes continued to be made until 1921, just prior to the release of the new uniform instructions of 1922.

When the Hospital Corps was established in 1898, pharmacists were to be appointed as warrant officers and no provision was made for lower ratings in this medical specialty. Congress in 1916 provided for the ratings of chief pharmacists and for pharmacists, first, second and third class. Change 8 of 13 October 1916 directed that the distinguishing mark for this new type of petty officer be the red Geneva Cross of the Hospital Corps. The Third Class Petty Officer Pharmacist’s Mate shown in the background displays the single scarlet chevron on his rate with the white spread eagle and the red Geneva Cross on the left arm. Only members of the seaman’s branch wore rating badges on the right arm. The collars of the full dress blue overshirt for all enlisted men, other than chief petty officers, displayed three rows of white tape. The cuffs of petty officers were also decorated with three rows of tape. The cuffs of other enlisted men showed two or a single stripe, depending on their rate. It is to be noticed that the overshirt, now called a jumper, does not hang straight down as it does today. Under the 1913 instructions, the shirt had a draw string in the bottom seam, which was pulled tight at the waist, so the shirt hung in blouse-fashion.

In spite of the fact that official instructions for the uniforms of members of the Navy Nurse Corps prior to 1924 have not been located, there are many good, contemporary photographs and some notes. The outdoor uniform consisted of a dark-blue Norfolk coat, a full blue skirt, a blue cape to be worn buttoned and belted and a blue hat. Photographs of Navy nurses of World War I taken by the Army Signal Corps in 1918 show this costume and have been used as the basis for the illustration. On either side of the cape collar is the insignia of the Corps, a gold oak leaf and acorn superimposed on a gold foul anchor. A photograph of Lenah Sutcliffe Higbee, Superintendent of the Navy Nurse Corps during the war, shows her in a blue coat with a standing collar. The coat is very similar to military coats of the period, buttoned up the front with black buttons and with the Corps device on either side of the collar. Her hat is not the dark blue felt hat shown in the Signal Corps photographs but a stiff felt “sailor” type hat. The ribbons on both hats are black.

The lieutenant commander of the Supply Corps is depicted in the new blue service coat. By a Uniform Change 27 of 17 March 1919, the present day double-breasted blue service coat was authorized to replace the single-breasted fly front coat first authorized in 1877. The sack coat was similar to that worn by officers of the British Navy during the war and in keeping with the civilian clothing of the period. The coat was to be worn with a plain white shirt, a stiff turndown collar and a black four-in-hand tie. It is to be noted that the white cloth, used since 1869 to identify members of the Supply Corps (then the Pay Corps) does not appear between the stripes of sleeve lace. Under a change of 16 November 1918, the colored cloth was removed from the sleeves of all staff officers and their corps device was to be worn above the upper stripe of lace in the same manner as officers of the Line had worn the gold star since 1863. The same change was made with reference to the shoulder marks—the device replaced the colored Corps cloth. The fly front blue service coat could be worn until 1 January 1921 but all uniforms purchased after receipt of the March 1919 order were to be of the new double-breasted pattern.

After so many years of being deprived of most of the insignia and gold lace of the other commissioned officers of the Navy, chaplains were finally permitted to wear a uniform more like that of other officers. A change of 26 June 1918 directed chaplains to use gold lace on the sleeves of their blue coats to indicate their grade and to employ the lustrous black braid, which had formerly shown their grade, as a Corps cloth for chaplains. The cap of a chaplain was to be identical to that of other staff officers. The chin strap, formerly black braid, was to be gold lace. Chaplains of the rank of captain and commander, who had earlier shown a band of half inch wide black braid on the visor of their caps, now showed the gold lace of the other senior staff corps officers. The chaplain with the grade of commander is shown in the blue undress uniform—blue frock coat, blue trousers, and a cap with a white cover. Between the three stripes of half inch gold lace on his sleeves is the lustrous black braid, the distinguishing color of the Chaplain Corps. The frock coat had five buttons on each breast; only the lower four buttoned and the uppermost remained visible. Although Secretary of the Navy Josephus Daniels on 7 October 1917 had advised that officers would not be required to possess any uniforms except blue and white service dress, the wearing of the more formal uniforms was permitted on certain occasions.

An area of frequent change in the 1913 Navy Uniform Regulations was that covering the dress of members of the Naval Militia, the National Volunteer Force and the Naval Reserve Force. Various methods were used to indicate non-regular status. Under the first instructions of the Naval Militia, a staff officer was to have a break in the center of the distinctive corps cloth on the sleeves of blue uniforms. To provide a uniform for members of the newly created Naval Reserve, Change 10 was issued in January 1917 directing that these officers wear the Naval Reserve Force device, a miniature cap insignia in lieu of the corps device of the U.S. Navy or the star of an officer of the Line. In the case of a Reserve staff officer, the distinctive Corps cloth between the sleeve lace would not be broken as had been done for the Militia earlier. Change 20, undated but issued between 26 June and 2 July 1918, issued new instructions to cover the identification of Naval Reserve staff officers. The cloth to indicate the Corps affiliation was to be broken in the center for the distance of an inch and one half. Reserve staff officers could now show their appropriate corps devices on the standing collar of the blue service coat instead of the special insignia introduced in 1917. The officer pictured is a Medical Corps lieutenant, U.S. Naval Reserve Force. The dark maroon cloth of the Medical Corps is broken in the center between the two half inch wide gold lace stripes of his grade. The device of the Medical Corps, the gold oak leaf with a silver acorn superimposed, is shown on his collar behind the two silver bars of his grade. It would not be until the 1920’s that both regular and reserve officers would wear the same uniforms and insignia.