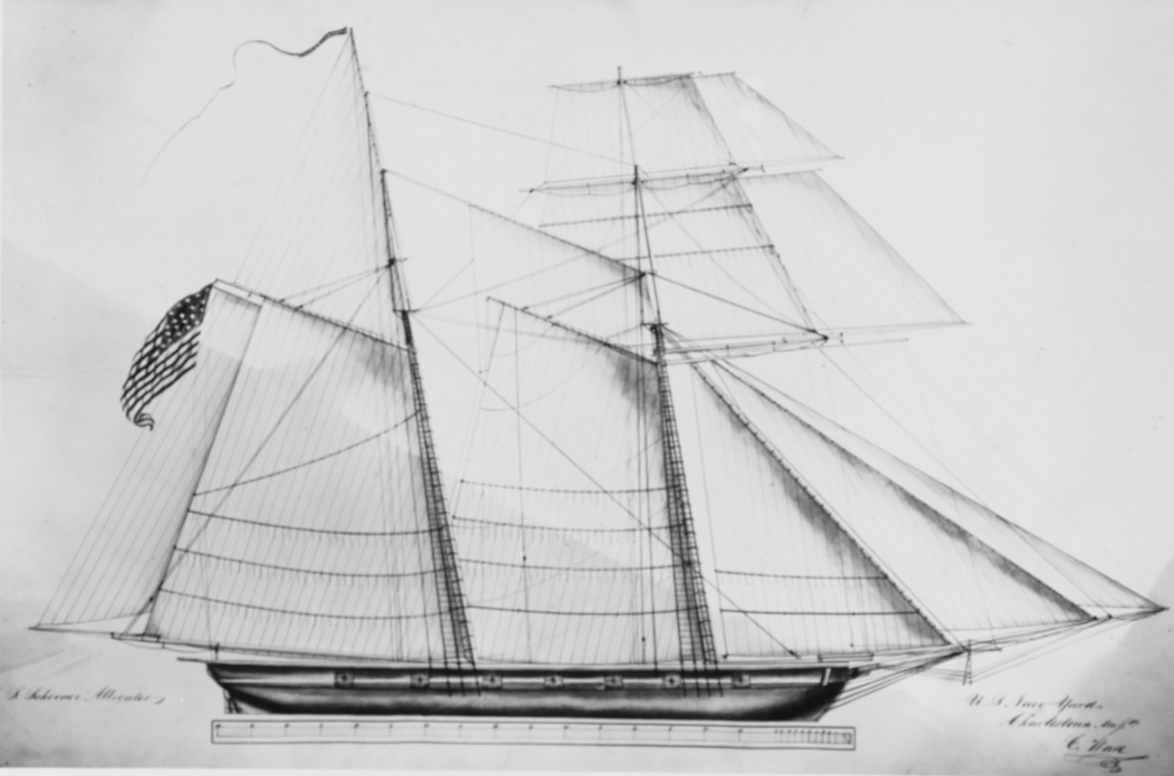 Caption: Plan of spars and sails by C. Ware Boston Navy Yard circa 1840. Original plan in the National Archives. NH 57010.

On November 2, 1820, the newly completed hull of the United States SchoonerAlligator slipped down the ways at Charlestown Navy Yard near Boston, Massachusetts. Alligator was one of five schooners built for the suppression of slavery and piracy during the presidency of James Monroe, and was based on a hull design developed by American naval architect William Doughty. Its hull had a steep deadrise, which, combined with the forward rake, made the vessel sharper and sleeker in the water and effectively eliminated the need for a centerboard. Despite its fine lines and relatively small size, Alligator was heavily built: frames were constructed of live oak; white oak comprised the hull planking and structural knees; and the treenails were carved from locust wood. The vessel's hull below the waterline was sheathed with copper. Shortly after its launch, Alligator was ballasted with approximately 19 tons of kentledge (iron ballast blocks or pigs). The newly constructed warship mounted a single 18-pounder high pivot gun and between ten and twelve 6-pounder carronades.

Alligator served a brief but remarkable naval career. Shortly after being commissioned in March 1821, the schooner sailed on its first assignment to the west coast of Africa. Alligator's commander, Lieutenant Robert F. Stockton, was tasked to suppress the African slave trade and select and acquire territory to resettle former slaves in their native continent. The land eventually purchased by Stockton and Dr. Eli Ayers of the American Colonization Society became the Republic of Liberia. During the remainder of its first cruise, Alligator captured several slavers, including the schooners Mathilde, L'Eliza, and Daphne. Four months later, the schooner put to sea and set a course for West Africa a second time. While on its second cruise, Alligator captured several more slavers, and engaged and defeated the Marianna Flora, a Portuguese pirate vessel.


In 1822, the United States government dispatched Alligator to the waters surrounding the newly acquired Territory of Florida to combat rampant piracy in the Florida Keys and along the coast of Cuba. For much of that year, Alligator--first under the command of Stockton and then Lieutenant William H. Allen--engaged and fought pirates in the Caribbean. In April, Alligator's crew captured the pirate schooner Ciegna off Nuevitas, Cuba. In November, Allen received word that pirates had captured an American merchant schooner and brig. The small pirate fleet was moored in a small bay approximately 45 miles east of Matanzas, Cuba. Alligator arrived in the mouth of the harbor at dawn on 9 November; shortly thereafter, Allen ordered crews to man and launch armed boats, assault the pirate vessels and reclaim the American ships. Two musket balls mortally wounded Allen as he led his crew in the assault on the pirates. Despite his wounds, Allen continued to direct his men, who eventually overwhelmed the pirate schooners. Allen died four hours after the melee, and was later buried at Matanzas with full military honors.


Alligator and its crew, now under the command of Lieutenant John Dale, departed the coast of Cuba on 18 November 1822. The warship escorted a convoy of seven merchant vessels, the majority of which had recently been rescued during the engagement of 9 November. On the evening of 20 November, one of the merchant vessels, the Ann Maria, strayed from the convoy. Dale ordered a change in Alligator's course to monitor and ensure Ann Maria's safety. At approximately 9:30 p.m., Alligator ran aground upon an uncharted reef in the Florida Keys. Over the course of two days, the crew labored to free the vessel but the wind changed direction and drove the wreck further onto the reef. On the morning of November 22 a Bahamian wrecker arrived and took most of the schooner's rigging, sails and other equipment into its services. A few hours later, Ann Maria arrived at the wreck site and tookAlligator's crew, artillery and valuables aboard for the voyage home. The next day, 23 November 1822, Dale ordered Alligator set ablaze to prevent pirates from salvaging it. At 3:30 p.m., fire reached the schooner's powder magazine and it exploded.

In July 1996, the Naval Historical Center participated in a 10-day effort to survey the remains of a wooden shipwreck in the Florida Keys identified by local lore and popular published accounts as that of Alligator. The wreck (designated Florida Master Site File number 8MO173) is located on Alligator Reef, so named because it has traditionally been identified as the location of the schooner's loss. In addition to the Naval Historical Center's Underwater Archaeology Branch, project participants included underwater archaeologists affiliated with the National Oceanographic and Atmospheric Administration (NOAA), as well as members of the State of Florida's Bureau of Archaeological Research and the non-profit group National Center for Shipwreck Research, Ltd.


The survey had two primary objectives: 1) to investigate, record, and analyze exposed components of the vessel's hull; and 2) compare the extant hull remains of the shipwreck with historical accounts of Alligator's construction. The areas chosen for excavation were easily accessible and appeared to have been the subject of previous exploration by both commercial salvors and sport divers. The shipwreck site is located in 10 feet of water and prominently features two partially exposed stone ballast piles. Preserved elements of ship's architecture were found protruding from beneath the eastern end of the small ballast pile and include a fragment of the vessel's keel, 15 frames, 15 strakes of hull planking, 3 strakes of ceiling, and an unidentified, disarticulated timber hypothesized to represent either a loose frame or lower element of a composite keel. At the close of the 1996 investigations, project archaeologists produced a detailed site plan of the wreck's surviving hull structure, and archaeologists developed a comprehensive analysis of these remains.


Ultimately the 1996 investigations did not conclusively confirm or refute the identity of 8MO173 as that of Alligator. However, the majority of data gleaned during this project seems to argue against a definitive link between the shipwreck and the American naval schooner. Although examination of the hull remains confirmed the presence of copper sheathing and copper-alloy fasteners--construction attributes that would be expected of an early nineteenth-century U.S. Navy vessel--no military or naval artifacts were observed. In addition, specific elements of the vessel's construction, including diminutive timber scantlings and the relatively small number of fasteners used to assemble architectural components to each other, indicate that the hull was lightly built. These characteristics seem to contradict the more robust construction expected of Alligator, a vessel that was specifically built to withstand lengthy ocean voyages and, particularly, naval battles.


By far the most compelling argument against the identification of the shipwreck as Alligator is the preponderance of stone ballast at the site. Two archival sources--Alligator's logbook and a stowage plan of the schooner prepared in 1821--indicate that the vessel was ballasted with approximately 19 tons of iron kentledge. It seems highly unlikely that Alligator's entire complement of iron ballast and shot (totaling approximately 24 tons) would have been unloaded and replaced with stone ballast between July 1822, when the kentledge was last weighed and stowed, and November 1822, when the vessel wrecked. Some have theorized that stone may have been taken aboard as ballast to counter the weight loss generated by gradual depletion of the schooner's water and food stores. However, Alligator's logbook indicates that the fresh water contained within the vessel's water casks was gradually replaced with seawater in order to maintain its appropriate tonnage. Some scholars have suggested that stone ballast might have been added to supplement the kentledge already present in Alligator's hold. This scenario also seems unlikely, given the sheer size of the stone piles that characterize the site and the apparent lack of iron ballast noted during the 1996 investigations. In addition, a magnetometer survey of 8MO173 conducted by the Underwater Archaeology Branch in 2004 (see below) confirmed that it lacks kentledge or any other significant iron objects.


Based on the 1996 findings and subsequent archival research, the Underwater Archaeology Branch postulated that the shipwreck represents a different nineteenth-century vessel that met its demise on Alligator Reef. This is not surprising, given the large number of merchant vessels that grounded on the reef between 1821 and 1873, when a lighthouse was finally erected. Historical research revealed that at least four of these vessels, the barks Matthew Van Bree and Brandon, and the ships Sheppard and Spermo, grounded on the reef. The possibility exists that the remains of any of the aforementioned could comprise the wreck site erroneously identified as Alligator. Consequently, the Underwater Archaeology Branch conducted a shipwreck survey of Alligator Reef and portions of Alligator Shoal in June and July of 2004 to locate, identify, assess, and document the actual remains of the Navy schooner. The project was funded by research grants from NOAA's Maritime Heritage Program and Office of Ocean Exploration, and supported by staff from the Florida Keys National Marine Sanctuary (FKNMS) Upper Region Office as well as volunteers affiliated with the Sanctuary's Submerged Resources Inventory team.


Utilizing historic charts and maps of the Florida Keys, and wind, current, water depth and coordinate data contained in Alligator's logbook, the Underwater Archaeology Branch established a high-probability survey zone that encompassed all of Alligator Reef and a shallow water corridor extending approximately one-and-a-half miles to the northeast of the reef's main portion. The entire search area comprised a rectangle measuring 2 miles by 0.5 miles, with a total area of 1 square mile. All survey operations were conducted in waters managed by FKNMS, including a significant portion of the Alligator Reef Sanctuary Preservation Area. The Underwater Archaeology Branch did not locate Alligator's remains during the survey, but was able to rule out the majority of high-priority magnetic anomalies detected at Alligator Reef as the wreck of the Navy schooner. Three promising targets that are completely buried beneath the seabed remain unidentified, but exhibit magnetic signatures worthy of additional investigation.


Representatives of NOAA and FKNMS have ruled that, for the time being, buried targets noted during the survey's ground-truthing operations should remain undisturbed, due to their proximity to concentrations of live coral and turtle grass beds. However, the Sanctuary has also stated that the Underwater Archaeology Branch might be allowed to conduct limited sediment removal at specific targets in the future as long as such activity does not run counter to FKNMS's natural resource protection responsibilities.