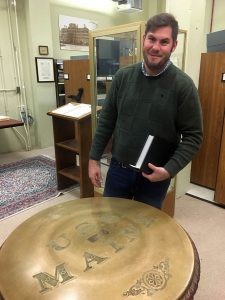 In support of National Library Workers Day, we reached out to our own Naval History and Heritage Command Special Collections Reference Librarian Tim Bostic.  He walked us past the numerous rows of book-lined shelves while answering our questions on the journey.  He even took us past the rare book room where we got to view some of the Navy’s oldest and most prized pieces of literature.

Q: Why does the Navy need a library?

A: The Navy needs the Navy Department Library to preserve its history and traditions, and to serve as a repository of its institutional knowledge. With our vast collection of books, monographs and primary source items, the library provides reference services to the Navy and the public at large, and can have real world applications.

Q: Does the Navy library still use the Dewey Decimal System, in the digital age?

A: The library no longer uses the Dewey Decimal System; instead we use the Library of Congress Classification System.  The Dewey Decimal System is divided into 10 classes which make it more suited to smaller collection; however, the Library of Congress has 21 classes making it more suited to research libraries, giving their catalogs more specificity. 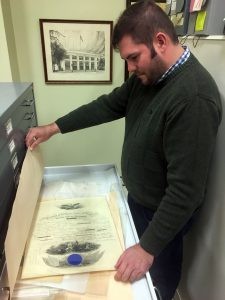 Q: What are the most requested items of the Navy library?

A: The most requested items at the library are our ZC ship files. It is comprised of 30 linear feet of material concerning 19th century ships of the U.S. Navy.  Some of the most referenced items are movement reports, newspaper and magazine articles, change of command pamphlets and even ships’ holiday menus.  The ZC files are just one of six Z-Files the Navy library has as reference material in our Rare Book Room, covering Personnel, Places, Operations, Sources of Historical Material and other miscellaneous documents not categorized under the other file series.

Q: Can anyone check out a book from the Navy library?

A: Military and civilian personnel stationed at the Washington Navy Yard can borrow library materials for one month. If you’re not stationed at the Navy Yard you can request books from us with your local library through inter-library loan. Any item over 100 years old cannot be requested through inter-library loan.   Being that the Navy library is the largest repository for cruise books, researchers are encouraged to bring a digital camera to the library or contact the Naval Historical Foundation concerning purchasing a reproduction.

Q: What is your favorite book in the Navy library?

A: My favorite book in the library is a log book from the HMS Lizard. The HMS Lizard was a British ship captured off the coast of New England during the Revolution.  I think it’s cool that we have a book from that moment in history.

Q: How many books are in the Navy library?

A: The library has over 110,000 books, almost 400,000 manuscripts and 192,000 periodicals. We also have tens of thousands of other materials from maps, war bond certificates, the Navy’s first signal book, calling cards collected by John Paul Jones in Russia and hundreds of unpublished World War II administrative and cryptological histories.

Q: And finally…It’s been rumored that the Navy library is older than the Library of Congress.  Is this true? 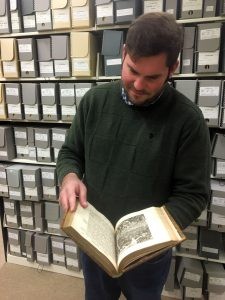 For more information about the Navy Department Library, visit: https://www.history.navy.mil/research/library/about/library-history.html

The Navy Department Library traces its roots to a letter dated 31 March 1800 from President John Adams to Secretary of the Navy Benjamin Stoddert directing him to establish a naval library. Today, the Navy Department Library acquires, organizes, preserves, and provides access to naval and maritime history, customs, and traditions through reference services and Internet outreach. One of the few major military historical libraries open to the public, the library serves an international audience. The Library’s collection consists of 109,000 book titles, 374,000 manuscripts, and 192,000 periodicals, with an emphasis on naval, nautical, and military history including foreign navies. Individual highlights of the collection include the US Navy’s first signal book; calling cards collected by John Paul Jones in Russia; hundreds of unpublished World War II administrative and cryptological histories; and documents captured on German submarine U-505 in 1944.