Share
Connect
About the Library
»
History of the Navy Department Library: A Bibliography
»
Navy Library a Treasure Trove for All to Use

Navy Library a Treasure Trove for All to Use 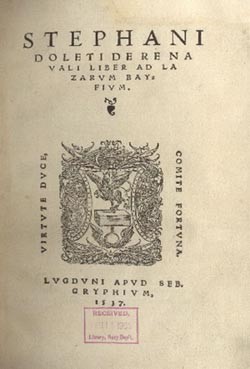 Etienne Dolet, called the “first martyr of the Renaissance,” was executed in Paris in 1546 after being found guilty by the theological faculty of the Sorbonne in Paris of blasphemy, sedition, and exposing for sale prohibited and condemned books. He was asked to cooperate and admit his heresy. If he did not cooperate, he would be tortured, his tongue would be cut out and he would be burned alive at the stake along with all of his books. If he agreed that what he did was wrong, he would still be burned at the stake for heresy, but instead of being burned alive, he would be strangled to death first, a more merciful way to go.

The French authorities ordered everyone who owned his books to turn them in so the copies could be burned along with Dolet’s body. One of his books, De Re Navali, (On Naval Matters) was published in 1537. One of the copies not burned by the French rests inside a glass case in the rare book room of the Navy Department Library at the Washington Navy Yard in Washington, D.C. 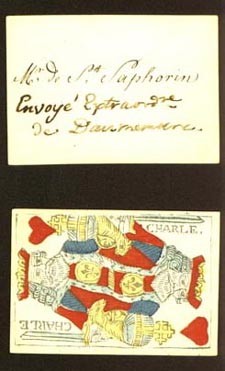 Sit down with Glenn Helm, director of the library (which is part of the Naval History and Heritage Command), and you’ll hear many stories like this one and see navy relics you would only expect to see in a pirate movie. This treasure trove of information is open to the public and Helm is eager to see more visitors among the stacks.

Among the collection of more than 150,000 books and tens of thousands of manuscripts on the U.S. Navy, you can see John Paul Jones’ business cards from when he was in the Russian Navy, signal books with lead covers that would sink to the bottom of the ocean when thrown overboard (this kept the coding within them safe from enemy hands) and diagrams of how to load Africans onto slave ships, a disturbing reminder of our country’s past.

These items are available for view at the library, which is open to the public. The stacks serve an international audience and provide resources vital to the writing and publishing of naval history, as well as information relating to the needs of today’s Navy. The library also has a portion of the Naval History and Heritage Command's web site, a venue Helm says helps spread the word on Navy History.

"(Our web site) is the best outreach we’ve got,” Helm said.

The website began on 1 May 1996, starting with a simple frequently asked questions page and expanded from there. The library's portion of the web site received over 2 million hits last year. Along with FAQ’s, Helm says the library staff likes to include information the public hasn’t requested but may be interested in, such as Chaplain Henry Hibben’s rare publication Navy-Yard Washington : History From Organization, 1799 to Present Date published in 1890; and “The Defense and Burning of Washington in 1814: Naval Documents of the War 1812.”

Beyond the Web and the Washington Navy Yard, the library’s place in history stretches back to 1794 when the Naval Bureau was part of the War Department in Philadelphia. The collection moved to Trenton, N.J., and from there to the Georgetown section of Washington, D.C.

Because of all of the important and secretive documents within it, the library’s collection was evacuated during the War of 1812, when the British burned down many of Washington’s federal buildings. 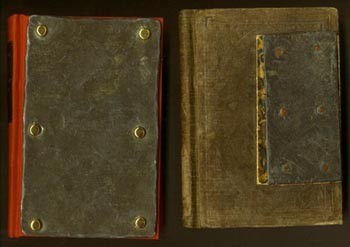 It is also said that President Theodore Roosevelt wrote his two-volume book, The Naval War of 1812 at the library. His fondness for the institution continued when he moved permanently to Washington, D.C. to serve as Assistant Secretary of the Navy and then president. According to the library’s web site, Roosevelt once called the library to tell them that “the shades were drawn unevenly” and to warn them that “growing plants should not be placed in the library windows.”

The public is welcome at the library, although the institution is frequented most by naval, military and nautical researchers as well as Navy veterans and geneologists, Helms says. Personnel stationed or employed on the Washington Navy Yard may borrow materials for one month. The catalog is only searchable in the library.

The library itself is run by a small number of employees, assisted by civilian volunteers, naval reservists and interns. One Naval Reserve officer, Commander Paul Villagomez, volunteers his time at the library and earns credit for Navy duty that goes toward his retirement.

Villagomez’s self-described purpose there is to “digitize before it all turns to dust.” He scans old Navy documents for publication on the web site.

"I get to touch history,” he said. This is an important act for Villagomez, who believes in history’s modern relevance that goes beyond just an affinity for the past.

"Those who don’t know history are condemned to repeat it,” he said.