Photos by AN Shawn McMahon

Just how current are you on your Russian naval history?

Ever wonder how a country that managed to lose every single naval engagement with the Japanese back in 1904 could become one of the most powerful navies in the world today?

Whether you’re an armchair historian who wants to brush up on the history of naval warfare or a full fledged PhD candidate deep in your dissertation, the Navy Department Library in the Dudley Knox Center for Naval History is a rich mine of information. 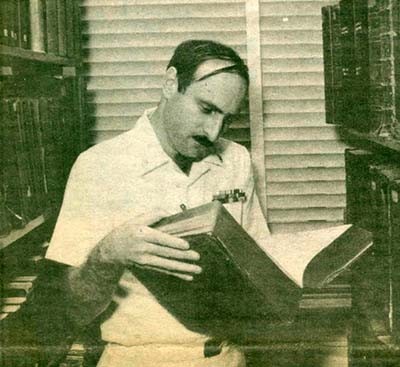 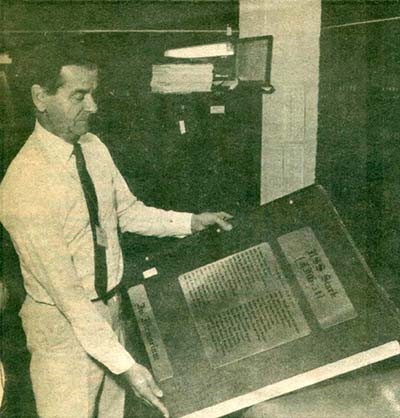 Inside the Rare Documents Room, John Vajda, Assistant Librarian of the Navy Department Library and a former Marine, shows an original book from the USS Stark that commemorates the ship's tragic loss of life in the Persian Gulf on May 18th, 1987.

John Vajda, assistant librarian of the library for the past 12 years, took some time out of his busy schedule to tour the library and relate some of its history.

Located in the Washington Navy Yard just off Leutze Park, “the library is in something of a backwater here,” Vajda says. “There are people who’ve worked here ten years who are simply amazed when they discover this place exists. I don’t know where the fault lies. We should be trumpeting our existence far and wide.”

Vajda notes the library is really a “scholars” library, and that about 40 percent of its users are professional historians. The rest include authors, congressional staffers and other government workers, ordinary citizens, the news media, and both active duty and former enlisteds and officers who are history buffs or interested in reliving their service days.

“We have one chief who comes in regularly every scrap of free time he can manage; though he’s not a professional historian, he’s made himself quite an expert on navy ships from the age of steam to WWI,” Vajda adds. “We often go to him when we have questions.”

Vajda and a staff of nine other librarians order all the books, periodicals and papers, catalog them, and handle the more than 7000 annual public queries for information.

Anyone can use the library, whether military or civilian, Vajda notes. It’s open to the public from 9 a.m. to 4 p.m. Monday through Friday. And you don’t have to be in the Navy Yard to take out a book. You can be in California and borrow a copy of your ship’s cruise book or most any book through your local public library by means of interlibrary loan.

The library now houses over 170,000 books and receives over 450 journals yearly. Its rare document room holds 5000 volumes; and though their value has never been formally appraised, Vajda conservatively estimates they would fetch well over 3 million dollars if sold as a set.

But it’s not just a collection of old facts.

Historians working for the Dudley Knox Center actively study original source material and reduce it into history, from the American Revolution to the U.S. role in the Persian Gulf.

Original source material is essential to the historian’s job, Vajda says. It’s the actual treaty or message traffic sent in the heat of battle that the historian uses to write, not copies or second hand information. This helps insure the accuracy of the history.

Most of the original, unpublished documents both classified and unclassified are housed in the Dudley Knox Center’s Operational Archives Branch, but the library itself is rich in original WWII primary sources.

Under Navy Captain Dudley Knox, head of the Office of Naval Records and Library, and President Franklin Roosevelt (both great lovers of naval history), researchers began a systematic survey of the U.S. Navy in WWII, while the war was going on. Knox recruited a select group of professional historians, commissioned them as Navy officers, and set them free to document the war. 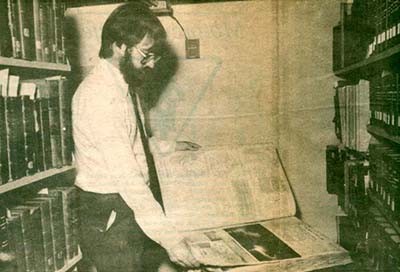 Their multi-volume work is now in the library and called The Administrative History of the Navy in WWII. Minority recruitment was also a concern during the war, long before the civil rights movement of the ‘60s. There’s even a study called The History of the Negro in the Navy between 1941– 1945.

No matter what the subject, if it concerned the navy in WWII, it’s in those volumes.

This aggressive pursuit of history while it was occurring was unprecedented on this scale. Knox also pioneered an oral history of the wartime Navy whereby participants in the Pacific and the Atlantic were interviewed as soon as possible after significant operations and events.

Today, you can go to a shelf and pull down the original typescript of former U.S. Navy writers such as James Michener, who chronicled the war in the Pacific long before he became famous with his book Hawaii.

And the tradition continues, with the Historical Center’s Contemporary History Branch experts on the Vietnam War and the Persian Gulf conflict researching and writing their pieces of the historical puzzle while still fresh.

“A historian’s job is never finished,” Vajda notes. “The Early American History Branch is still working on its series Naval Documents of the American Revolution, which is already in eight volumes. A ninth is due shortly.”

You never know what topic will be hot in the library on any given day.

“When ‘Iranscam’ broke,” Vajda says, “all the major wire and news services were asking for what these officers were doing in their academy days.” The Navy Library has a complete series of the Navy Academy yearbook, “Lucky Bag,” from which many of the photos and background information were taken by the media. “Probably the Academy itself is the only other place with a complete set of the books,” Vajda says.

Over 2000 “cruise books,” some going back to WWII, are housed in the open stacks of the library, and every week at least three requests are received by former service members interested in seeing them or obtaining a copy.

Because the cruise books are published in small quantities for the ship’s company only, the library can’t actually order a back issue for you. But if a cruise book is published, the ship is supposed to send a copy to the library, Vajda adds although unfortunately, not everyone complies.

The library’s work never ceases. Each day requests are received from around the world by phone and letter, from former Navy people writing a book on optics in the Navy in WWI to current CPO candidates anxious to get that right answer to their endless lists of initiation questions.

Each request gets answered, no matter how farfetched. 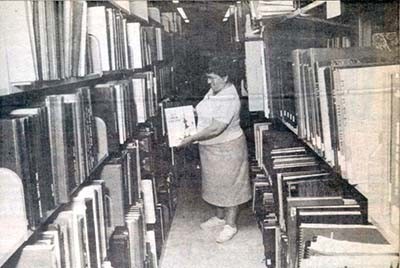 Agnes Hoover of the Dudley Knox Center for Naval History's Curator Branch examines one of the library's collection of more than 2000 ship's "cruise books." 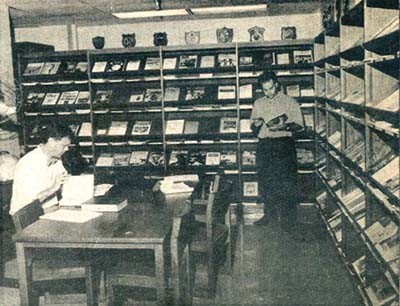 One of many scholars researches an article for the Naval Institute in the Navy Department Library's periodicals section.

“What was the order in which the Navy’s 73 different ratings were created?” Vajda says the woman who asked was “absolutely stunned and surprised that we could give her an answer.” He notes the library has asked if the MCPON’s office could possibly standardize the list of chief’s questions, but most of the requests are as individual and hard to answer as the current chiefs can make them for the expectant first classes.

The library began humbly, with a few handwritten catalogs of professional books for use in the Secretary of the Navy’s office. That was in 1800.

Today, the Dudley Knox Center for Naval History is the national focal point for the Navy’s historical programs. But the library’s charter remains much the same as President John Adams mandated it.

“It ought to consist of the best writings in Dutch, Spanish and French, and especially English upon the theory and practice of naval architecture, navigation, gunnery, hydraulics, hydrostatics, and all branches of the mathematics subservient to the profession of the sea.”

Today, the largest holdings are of course on the U.S. Navy. But journals and books in Dutch, Spanish, and French as well as other countries possessing navies are regularly received.

“After the United States, the next greatest holdings are on the British Royal Navy, from which our navy drew so many of its tradition[s],” Vajda says. Next in importance is the Soviet Navy, and its professional journal Morskoy Sbornik, which is translated as The Soviet Naval Digest, is there in both the original Russian and English translation.

But what makes this collection special is that it is complete and goes all the way back to when the Czars ruled Russia. There was even a time when the Russian officers exiled in Paris published an expatriate version at the same time the Soviets were publishing theirs: the library has both.

Service members often want to donate their books and papers to the Navy Department Library, Vajda says. “We never throw anything away, but we keep only the materials that relate to naval history.” The rest go to the Exchange and Gift Division of the Library of Congress.

Admiral Arleigh Burke’s wife had a “marvelous period collection of old romance novels by a sort of turn of the century Barbara Cartland; but we really couldn’t count that as naval history,” he adds.

You never know who will pop up in the library.

Every year like clockwork, retired Admiral Jerauld Wright hauls his mammoth leather bound handmade scrapbook from the rare documents room and takes it to the reunion of the ship he skippered in 1943, the light cruiser USS Santa Fe. When the festivities are finished, Wright returns the tome for safekeeping.

“Admiral Wright’s scrapbook is the precursor to the modern cruise book,” Vajda says.

You must have special permission to get into the Rare Documents Room of the library, but not everything there is old, Vajda says. “For our purposes, only if it’s before 1825 is it considered rare. There are ‘younger’ books on the regular shelves from early 19th century that anyone may browse through.”

One of the most recent books in the library has is a special handmade book from the USS Stark which commemorates the lives lost in last year’s Persian Gulf tragedy [U.S.S. Stark (FFG-31): In Memoriam]. Inside are hundreds of letters and telegrams from all over America and the ship. They not only document the great loss but also the hope that was generated by Americans who helped with the Stark's memorial scholarship funds.

"There's not a great deal of turnover in the Historical Center's staff," Vajda muses. "There's a fondness for this sort of material that just gets to you."

Readers take note: stepping into the Navy Department Library could prove habit forming. You, too, just might be bitten by the history bug.