Share
Connect
About the Library
»
History of the Navy Department Library: A Bibliography

By the Books: At the Navy Yard, Rare Jewels Between the Covers 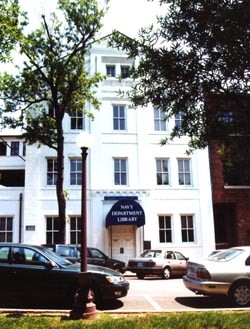 The building marked innocuously “Number 44” on the grounds of the Washington Navy Yard is nondescript as buildings go.

There is little flash or finery and the door this week has been swollen by humidity and is difficult to close. The most notable thing about the outside is that cars are always parked around it by employees at the yard scurrying for a precious parking space.

But inside is a treasure trove, valued at $5 million, including rare artifacts that would cause book collectors and historians to salivate. 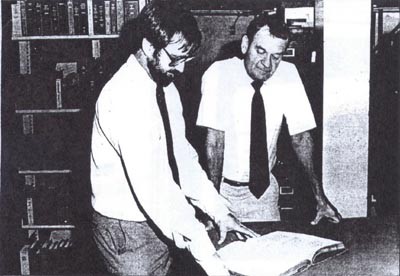 “It is so rich, it is hard to believe,” John Vajda, assistant librarian [later Library Director], says. “Many volumes are very, very rare. One entire shelf is covered with books printed before 1600. This is the Navy’s treasure. The Navy’s posterity is here.”

That posterity is in 7,000 choice volumes, manuscripts and other goodies such as 18th century calling cards collected by the one and only John Paul Jones, the nation’s first Naval hero, in his journeys over the world’s oceans. This is the only place where you can read the original letter from Commander David Porter announcing the capture of the first prizes in the war of 1812.

So unique is this bibliophile’s jewel box that it is frequently delved into by writers. Herman Wouk, author of Winds of War sent his researcher over numerous times; Capt. Ned Beach, writer of the classic Run Silent, Run Deep is a regular visitor; Admiral Ignatius Galantin, who wrote Take Her Deep has dropped by.

“It is a serious library," Vajda says. “Although it is open to the general public, we do not have frivolous users. Nearly all are scholars engaged in the production of a book.

“One Admiral selectee [subsequently Vice Admiral George W. Emery] visits whenever he’s in town and has catalogued our manuscripts and charts for us just because he loves the collection.”

Historians all over the world are attracted like magnets by the one-of-a-kind collections, such as the only complete set of the [naval] administrative documents [histories] of WW II. Put together by many young, then-unknown historians such as James Michener, the 350 volumes chronicle how the war was carried out by every Naval administrative department, from the Secretary of the Navy to local commands such as Naval District Washington. Few in the general public are even aware that such records exist. 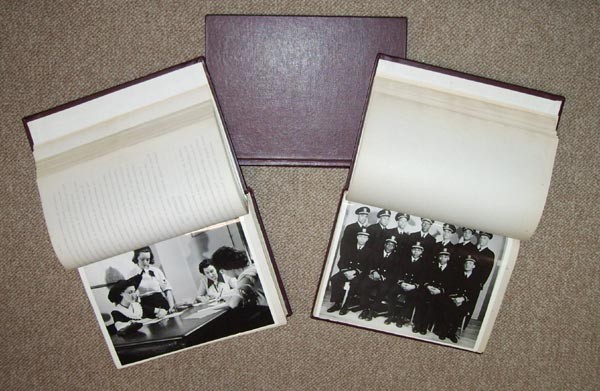 “These are absolutely the sin qua non to Naval historians,” the assistant librarian asserts. “President Franklin Roosevelt directed the service secretaries to chronicle the prosecution of the war. The Navy brought aboard historical writers, many of whom have become prominent, such as Michener and Walter Lord, the author of books on the Titanic. Up until 10 years ago, the set was available only here but the demand was so great we had them microfiched and sent to libraries all over the world.”

Working in such a place is a heady experience to men like Vajda, a professional librarian who spent half his career in public libraries in Washington. Given a chance in 1975 to work at the Naval Library, he took it with nary a hesitation.

“I could not have found a better home,” he brags. “This is real history, a collection that is used. You can see the fruits of your work frequently in publications. It is a study in the greatness and the foibles of mankind."

As an example he pulls out a small, bound volume of Niles Weekly Register promising in its tag “The Past, the Present, For the Future.” This edition, March 25, 1880, relates the past: an account of the duel a few days before between Commodore Stephen Decatur and one Commodore Barron.

“A duel was fought on Wednesday morning last, near Bladensburg, between the victor of the Macedonian, Com. Decatur and Com. Barron who commanded the Chesapeake frigate when she was overhauled by the British ship Leopard – They fought at 8 paces, with pistols – at the first fire, both were wounded – Com. Decatur through the abdomen, of which he died at half past 10 o’clock in the evening – Barron dangerously injured. Com. Decatur was carried to his own house, in Washington city, to the arms of his distracted wife, in the arms of Com. Rodgers, where he expired – The difference is supposed to have had its origin in an old quarrell – probably as old as the affair of the Chesapeake.”

“Com. Barron, it will be recollected, was suspended for five years for alleged misconduct in the Chesapeake frigate in 1807. The excitement at Washington city, when Decatur’s case was known, was without parallel.”

Such was the end for the hero of the Barbary Wars and the War of 1812.

There are a great many other finds in the rare book collection, which is part of one of the oldest federal libraries in the country. Not all are naval related. For instance, the oldest book in the collection, printed in 1482 at a time when most people thought the world was flat, is a copy of Quintiliani Declamationes (Rhetoric of Quintilianus) by the Roman orator Quintilianus and is completely in Latin.

“I don’t know how we got the book,” Vajda says. “It probably came through a donation. On the antiquarian market it may be worth $150,000.”

Few of the books have such value and not all are rare. Many items are simply unique, such as a Civil War signal book carrying war codes. A small volume, it has two heavy metal slabs on the covers. The idea was that if the ship were captured, the Captain could throw the book overboard and it would sink, out of reach of the enemy. Every uniform regulation promulgated by the Navy is also here as are registries of two centuries of Navy officers.

Among the stacks, kept at a temperature of 70 degrees and 50 percent humidity, you can also find:

• A hand-colored signal book written and illustrated by Capt. Thomas Truxtun, one of the Navy’s very first officers. Penned in 1797 aboard the U.S.S. Constellation, it is the only extant copy of the six printed. It includes marginal notes in Truxtun’s hand writing and is autographed.
• Log book of the U.S.S Brandywine from 1825.
• Capt. John Smith’s treatise on the duties of sailing men, called An Accidence or Path-way to Experience. Smith, folk hero who married the Indian princess Pocahontas, and royal governor of Virginia, wrote this precursor to the Bluejackets’ Manual in 1626.
• Charles Wilkes own account of his scientific exploration around the world in the mid 19th century with accompanying scientific documents.
• Architectural design books of early Navy ships.
• An autographed postcard on which is written “We have met the enemy and he is ours,” by the author of that famous saying – Oliver Hazard Perry. 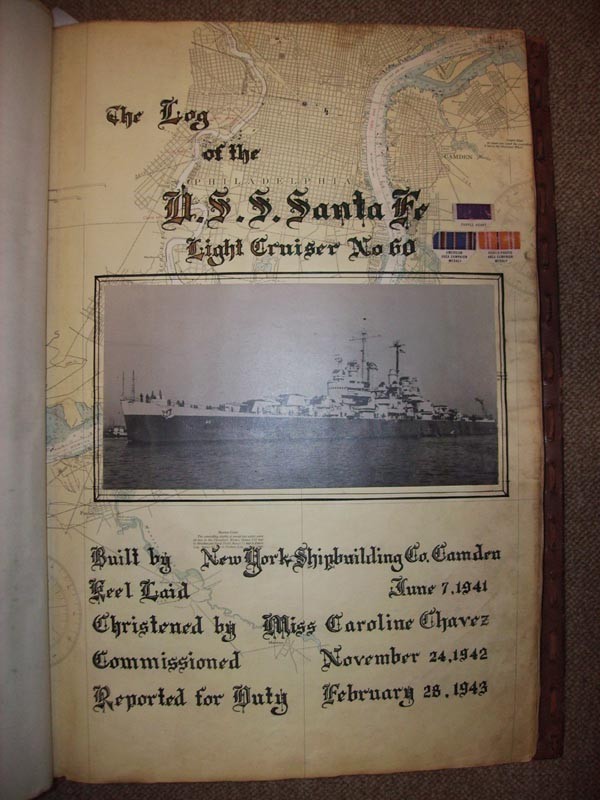 Some of the volumes are fragile and awaiting restoration, a costly process through which many of the books and manuscripts have already gone for preservation. Sent to a restoration specialist in Massachusetts, the books cost $500 to $2,500 to preserve. Each page is treated to prevent acidity.

And because the collection is valuable, browsing is not allowed.

“You have to know pretty well what you want,” the assistant librarian says. “We don’t leave anyone alone. It is not open for people to just wander in. A member of the library staff has to be with him. We don’t demand blood or anything but we keep strict accounting of who uses it. That’s why it is in a vault. But for people who are interested, for instance in the evolution of uniforms or how the naval war was carried out in World War II or for many primary sources, they depend on the rare book room.”

The heart of the historic treasures are the works on the American Navy written before 1825, considered to be the cutoff between what is rare and what is not.

“Anything before that date is rare in the naval sense,” Vajda explains. “Although it may not be rare in the general sense. That is the era when our naval history really begins because we had the Revolutionary War, the Quasi War with France, the Barbary Wars and the War of 1812, so we had a lot of Navy history by that time.”

“What I most like about it personally is that while many service libraries are filled with technical journals, this is history. I like the feel of buckram.”

That feel, of the old style bindings, is all around Vajda and the others who use the rare book room, though there are not many and the reason is that this treasure has not been heavily publicized.

“It is one of those little known treasures,” the librarian admits. “Hardly a day goes by that an officer or enlisted person from the Navy doesn’t come by and say, “Gee, I’ve been here 18 months and I never knew you were here.” We don’t try to keep it a secret but we don’t have a large advertising budget. Also, we’re a research library, not a general circulation library and that makes a difference, too.”

But while it is a kind of Washington secret, there are those who count on it and are glad it’s there. The office of the President makes regular inquiries that require research here for such things as speeches. Sen. Gordon Humphreys called last week to get technical data and some history prior to a visit to the aircraft carrier John F. Kennedy.

And with all its attention to the Navy’s history, the library and its rare book collection is gradually running out of space. Officials estimate that within five years there won’t be any more space for any more books, historical or not.