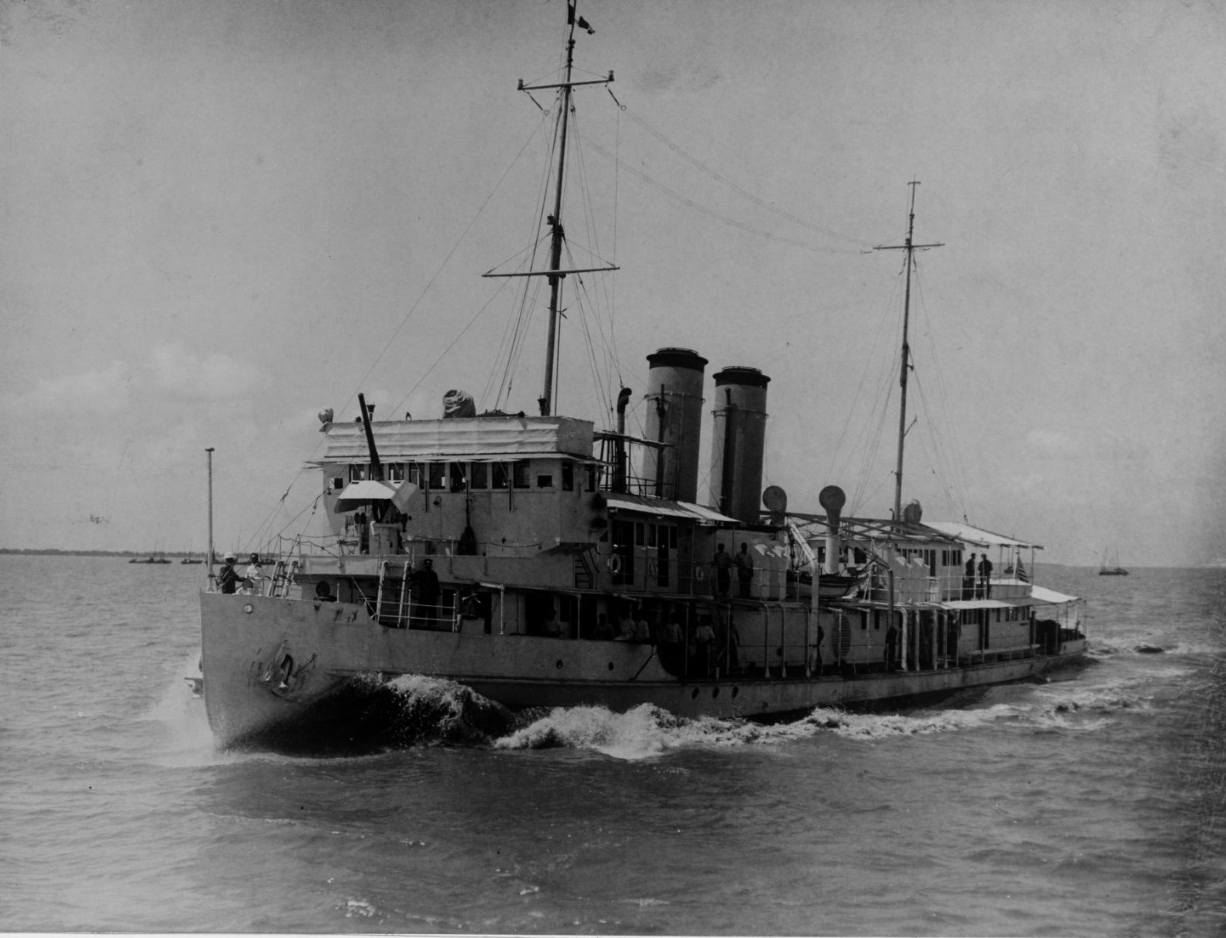 On Dec. 11, 1937, Panay, a gunboat specifically constructed for duty with the Yangtze River  Patrol, was operating as a station ship off Nanking, China. As Japanese forces assaulted Nanking, Panay took onboard numerous American citizens from the U.S. embassy, and a small group of foreign nationals. Panay then steamed upriver. The next day, Panay was traveling in a convoy with three American oil vessels—Meiping, Meian, and Meihsia—when the Japanese ordered naval aircraft to attack “any and all ships” in the Yangtze River above Nanking. Shortly after 1:30 p.m., three Japanese aircraft released bombs onto Panay and Meiping. Panay’s forward 3-inch gun was destroyed. The pilot house was wrecked, her radio equipment and fireroom were disabled, and leaks developed in the ship’s hull. The commanding officer and a number of crewmembers and others onboard Panay were injured as well. Within minutes of the first wave of bombers, another Japanese squadron of single-engine biplanes launched a second attack, dropping about 20 bombs. To learn what happened next, read the essay by NHHC’s Wendy Arevalo at NHHC’s website. 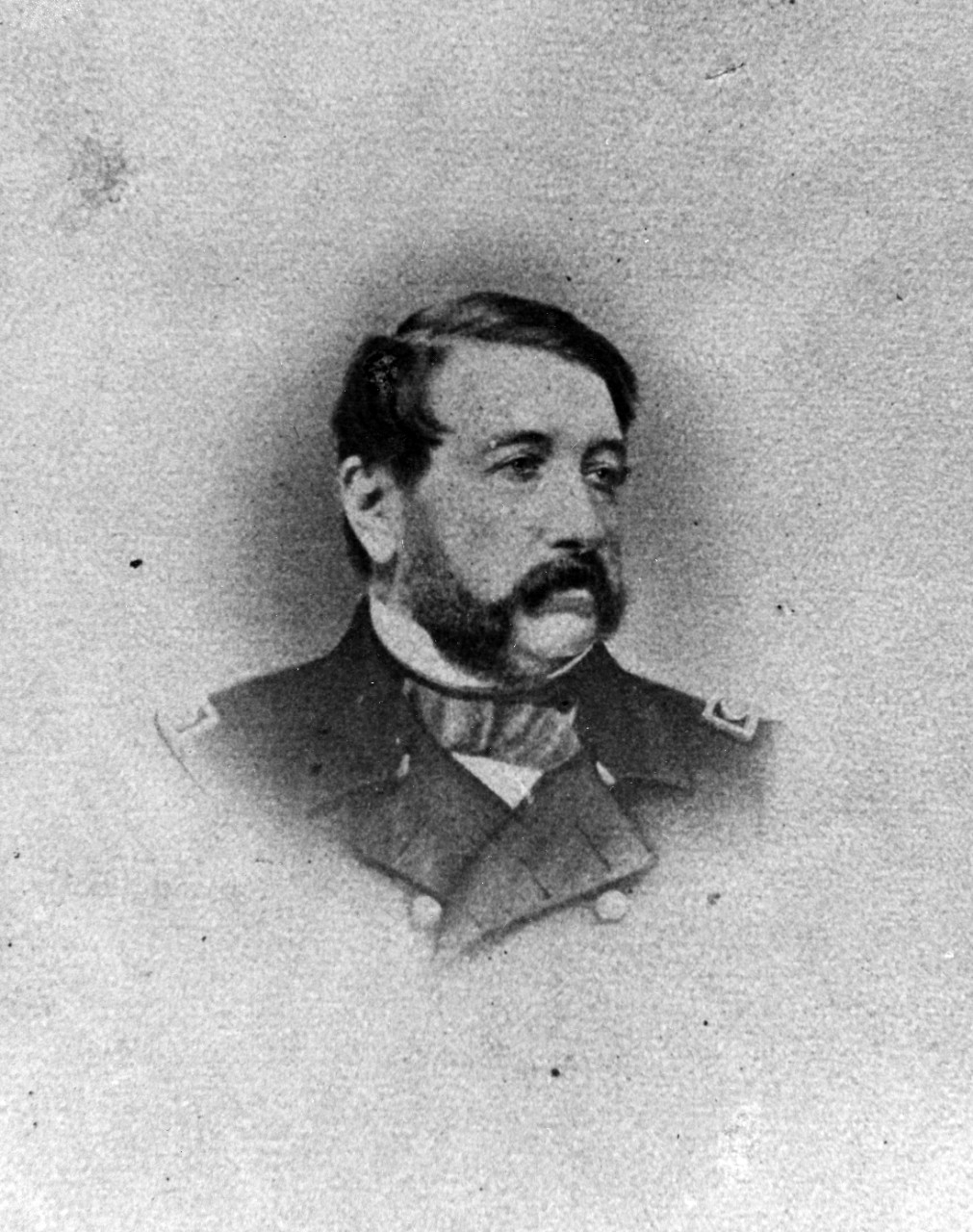 On June 27, 1861, while commanding gunboat flotilla Thomas Freeborn, Cmdr. James H. Ward was mortally wounded by a musket ball off Mathias Point, VA. He was the first U.S. naval officer casualty of the Civil War. Ward, who was born in Hartford, CT, became a midshipman in the U.S. Navy in March 1823 and served the following years on ships in the Mediterranean, off Africa, and in the West Indies. In 1845, he became the executive officer of the newly founded U.S. Naval Academy in Annapolis, MD. He also taught gunnery and steam engineering. During the Mexican-American War, Ward commanded the frigate Cumberland and later the gunboat Vixen. After the war, he served on shore duty at the Philadelphia and the Washington Navy Yard and was promoted to the rank of commander. At the onset of the American Civil War, Ward planned an expedition to relieve Fort Sumter and then was placed in charge of a small squadron operating on the Potomac River. With Thomas Freeborn as his flagship, Ward's force engaged the Confederates at Aquia Creek, VA, in late May and early June 1861 before he was killed. Destroyer USS Ward (DD 139) was named to honor of him. 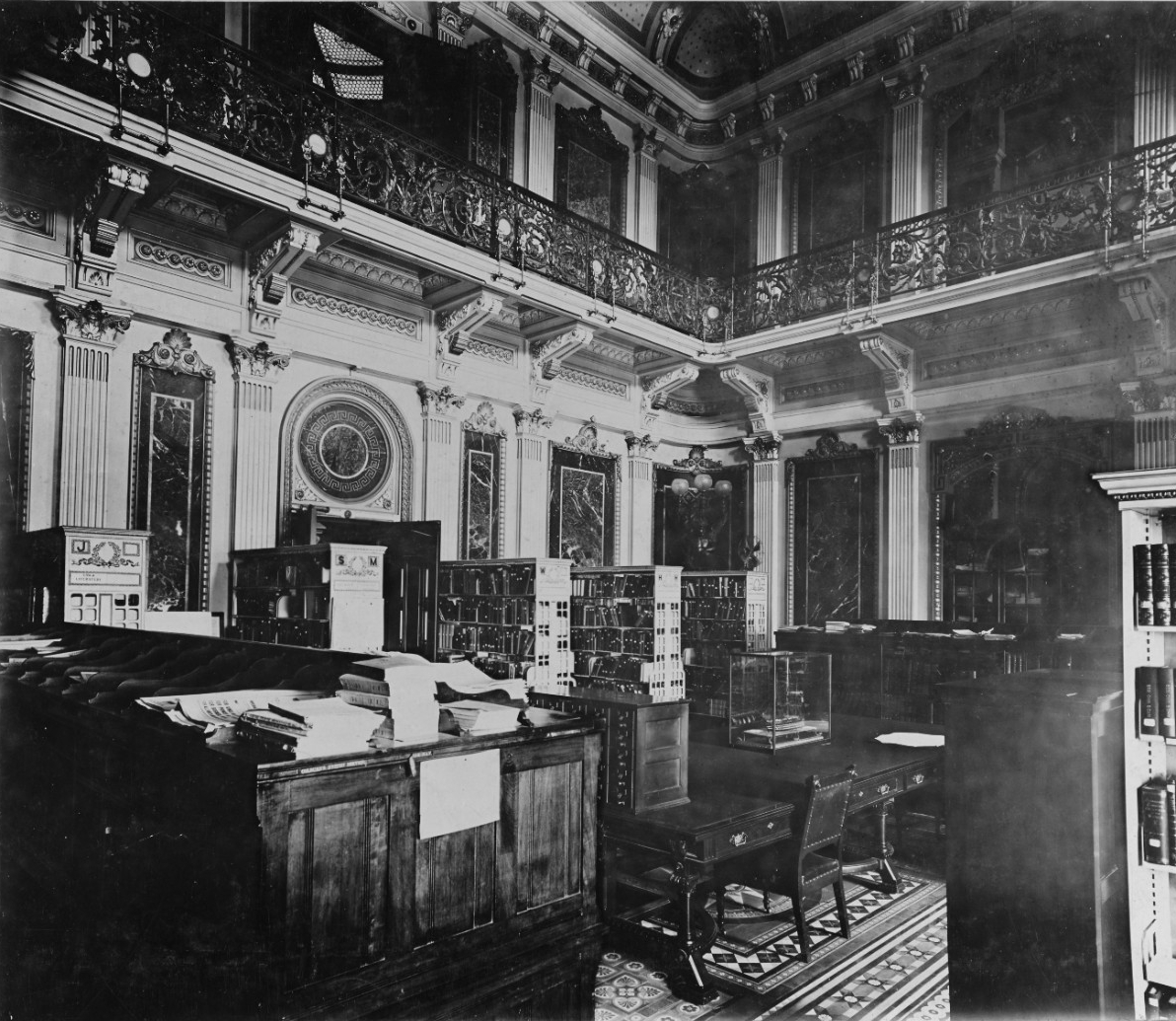 On July 1, 1919, the historical section and the library were incorporated into the Office of Naval Intelligence. The secretary's order coincided with passage of the first legislative appropriation “for collecting world war records.” The order was timely as several previous directives had expanded the activities of the historical section where overlapping with Office of Naval Records and library functions seemed inevitable. Since both activities, at the time, were under a single head, the separation between “old” and “current” records was recognized and accepted as marking the respective spheres of the original Office of Naval Records and the newer historical section. 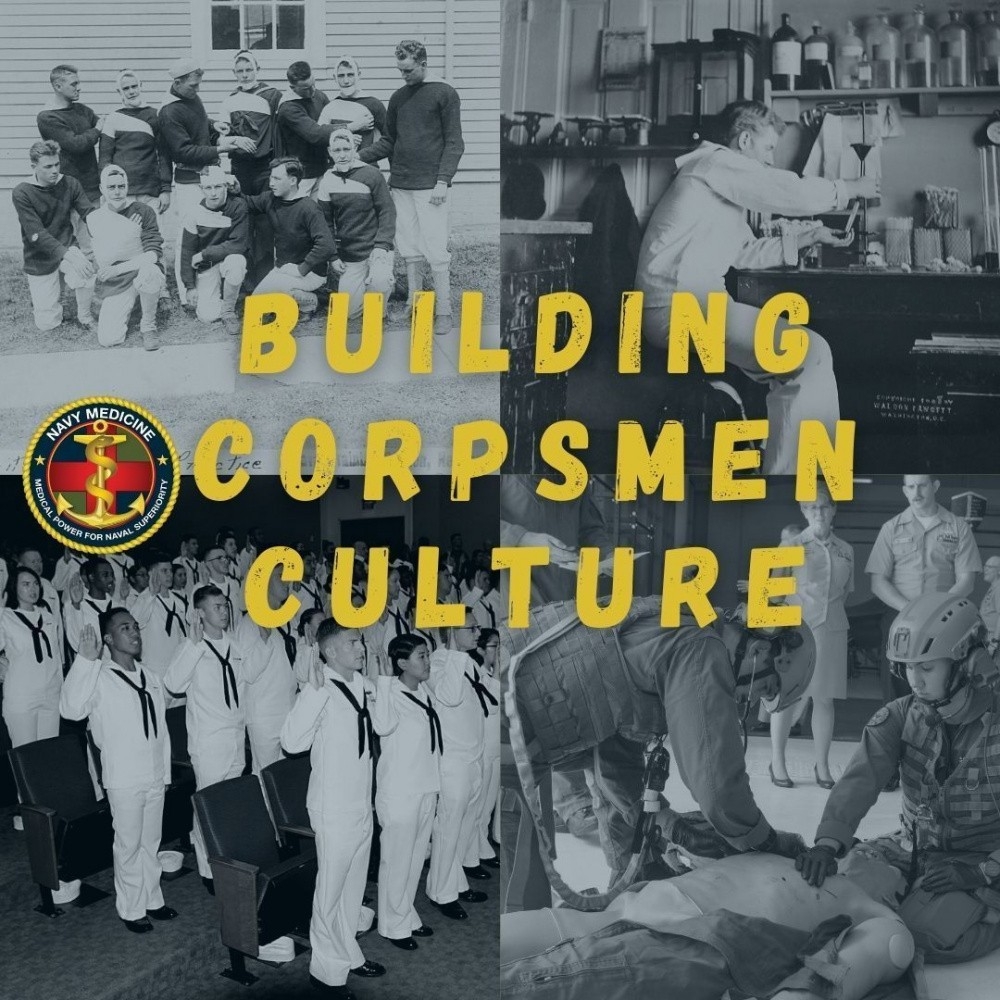 Building Corpsmen Culture: A Short History of the Hospital Corps “A” School

A hospital corpsman doesn’t become qualified at his or her rate without extensive training, and training has always been the cornerstone of every corpsman’s career. This fact was certainly well-known when the Hospital Corps was in the early days of planning. Over the course of the history of the corps, the Navy has continued to develop and ensure that corpsman have the skills necessary to operate aboard ships and on shore. These fundamentals lead to the establishment of the first basic school in 1902, first “C” schools, first advanced school during World War I, the advent of field medical training during World War II and Korea to the trauma training initiative and the dynamic training collaborations that the Hospital Corps continue to build on today. For nearly as long as the Hospital Corps has existed, the basic or “A” School has served as the foundation for training. On June 18, 1914, the Navy established the Hospital Corps School at Naval Training Station in Newport, RI. Although it was not the first foray into training corpsman, the school was the beginning of the Navy’s commitment to training corpsmen, which continues to this day at Joint Base San Antonio, TX. For more, read the article. For more on Navy medicine, go to NHHC’s website. 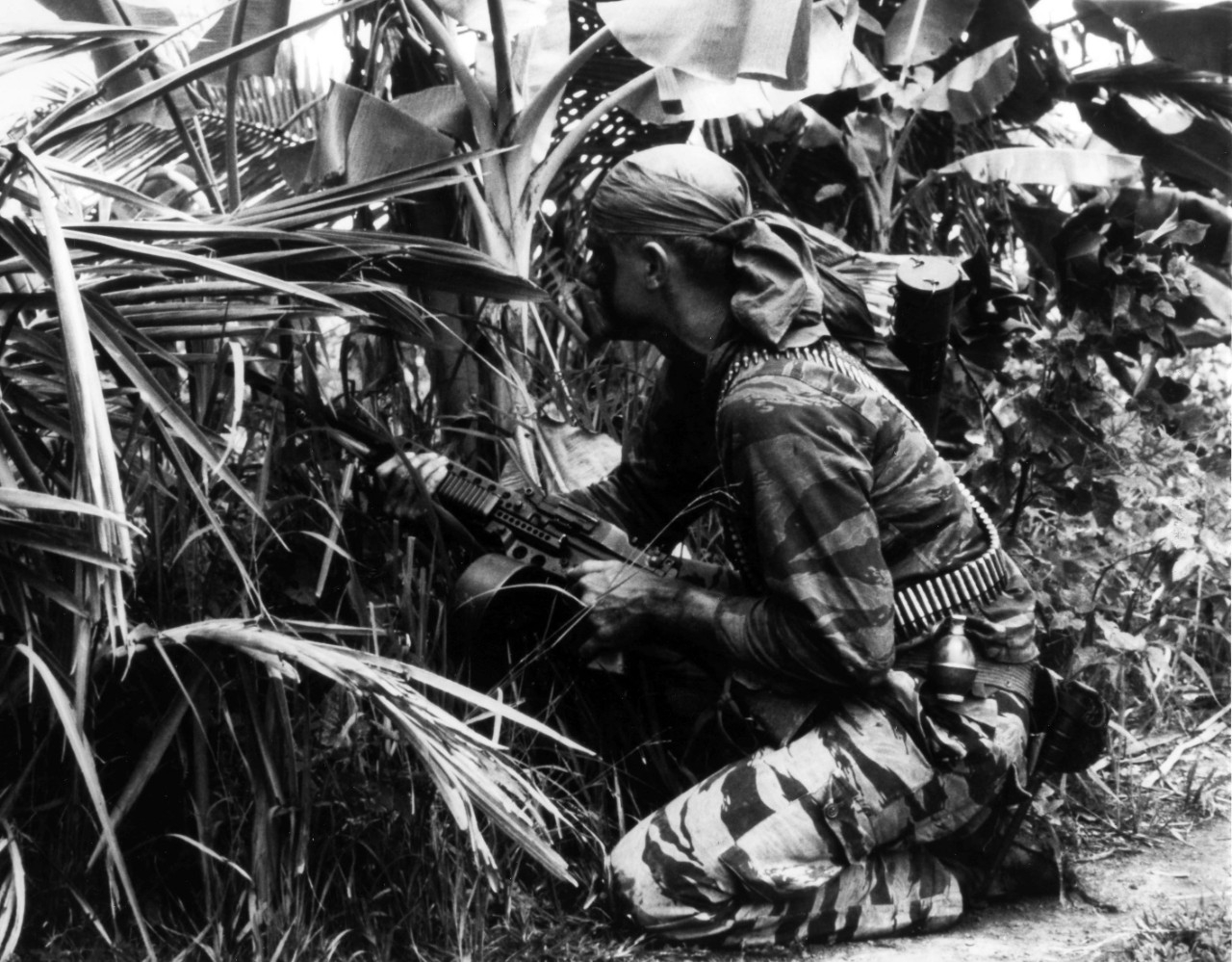 When the Vietnam War began, Capt. Phil H. Bucklew knew he had a few good years left in him. Bucklew, who is affectionately known in the Special Forces community as the “father of naval special warfare,” saw action as a frogman in the invasion of North Africa, Salerno, Sicily, Anzio, Normandy, and southern France during World War II. He saw exactly how the North Vietnamese were infiltrating South Vietnam, because that is how he would have done it. The Viet Cong were moving men and supplies south around the Vietnamese demilitarized zone through Cambodia in local fishing boats using the Mekong River.  The Navy launched Operation Game Warden, to patrol the Mekong River and its delta. The Navy also conducted operations like Market Time, which was an interdiction operation that searched coastal vessels and captured tons of materials headed to communist units in South Vietnam. However, Bucklew argued that these patrol operations were not sufficient, and more concrete, thorough steps were necessary to control communist supply routes. He argued for things such as checkpoints, barricades, and curfews to control traffic. For more on Bucklew’s foresight, read the article. For more on naval special warfare, go to NHHC’s website. 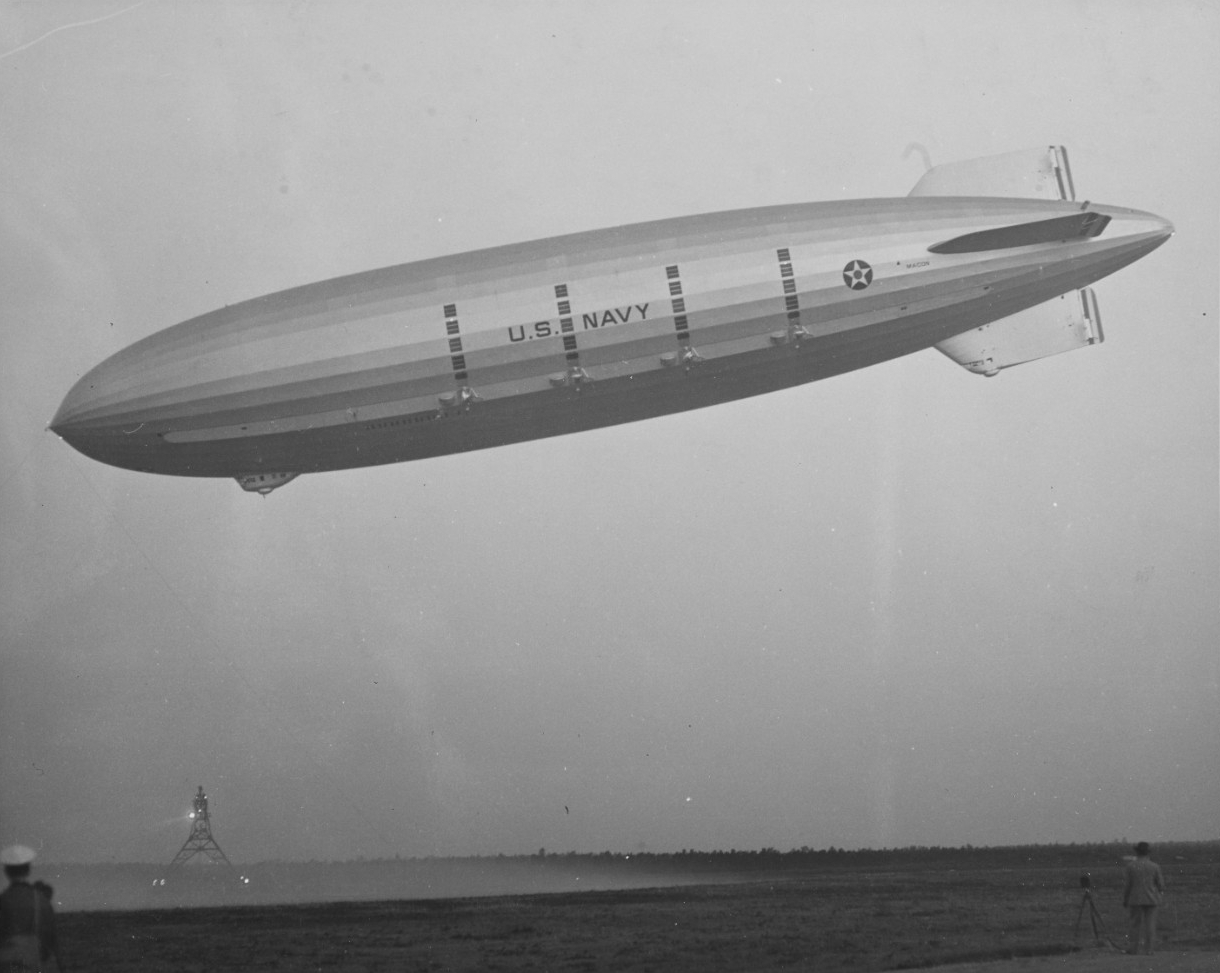 On June 23, 1933, USS Macon, built by the Goodyear‑Zeppelin Corp. of Akron, OH, was commissioned with Cmdr. Alger H. Dresel in command. The rigid airship was constructed around the same time as another rigid airship was built, USS Akron. They were viewed as an improvement from the Shenandoah design, having the ability to house and carry other aircraft, although they ended up being the first and last flying carriers. Akron was lost in 1933 off the coast of New Jersey during a storm that killed 73, and Macon was lost off the Santa Barbara Islands, killing just 2. The Macon crash ended the Navy’s program of rigid airship operations. For more on the Navy’s venture into airships and dirigibles, go to NHHC’s website. 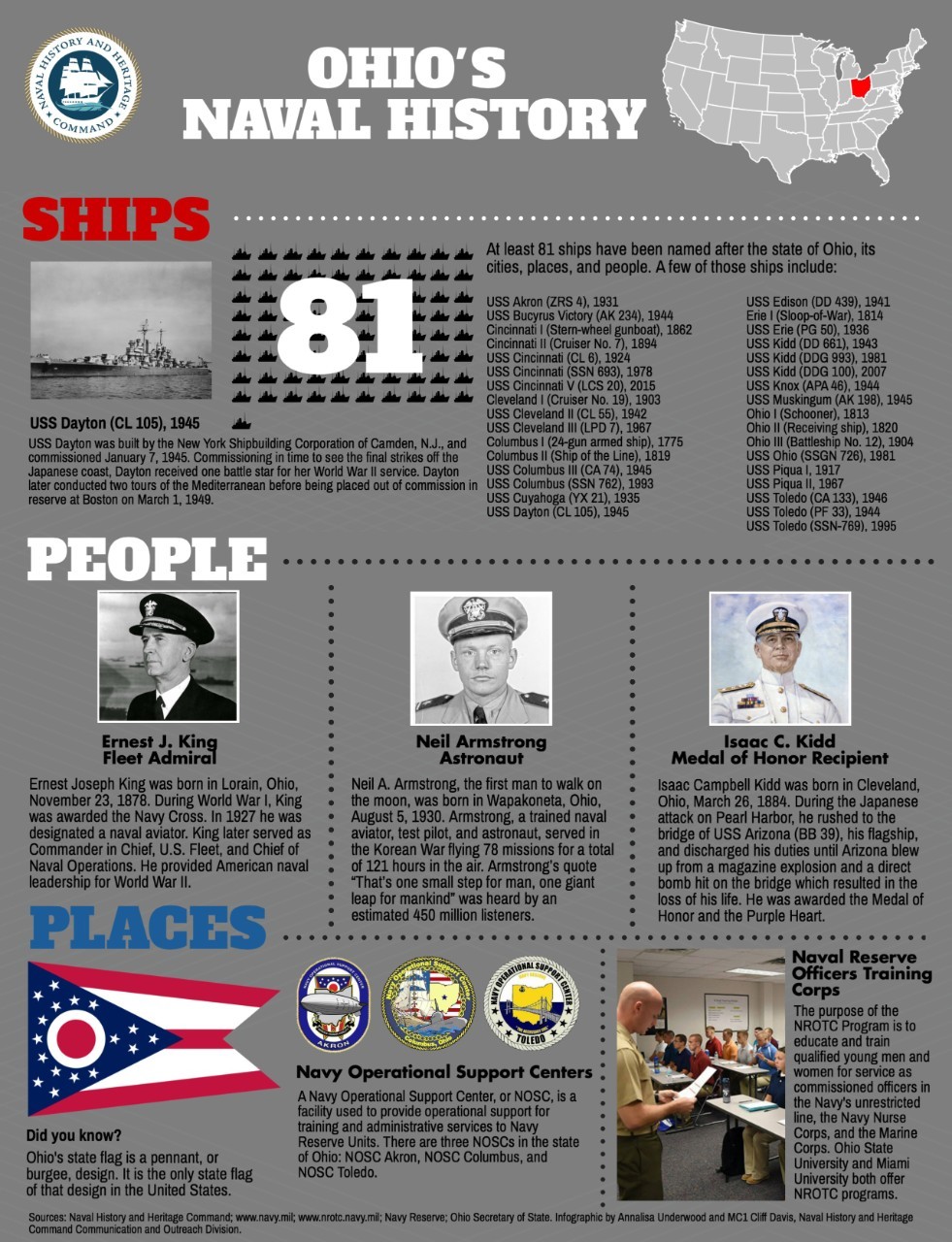 On June 16, during a ceremony in Marinette, WI, the keel was laid for future littoral combat ship USS Cleveland. Cleveland will be the fourth ship named for the Ohio city. The first Cleveland performed escort duties during World War I, the second Cleveland was a cruiser that participated in multiple battles during World War II, and the third Cleveland provided support during the Vietnam War and Operation Iraqi Freedom. Plans call for the newest Cleveland to be christened next year. She is scheduled for delivery and commissioning in 2023. “We are proud to build another proven warship that allows our Navy to carry out missions around the world. All of us at Lockheed Martin, including our hardworking team in Marinette look forward to working with the U.S. Navy to continue delivering highly capable and adaptable Freedom-variant littoral combat ships to the fleet," said Steve Allen, Lockheed Martin Vice President of Small Combatants and Ship Systems. Once the ship is commissioned, she will be homeported in Mayport, FL. For more, read the article. For more on Ohio’s naval history and the tradition of launching and commissioning, visit NHHC’s website. 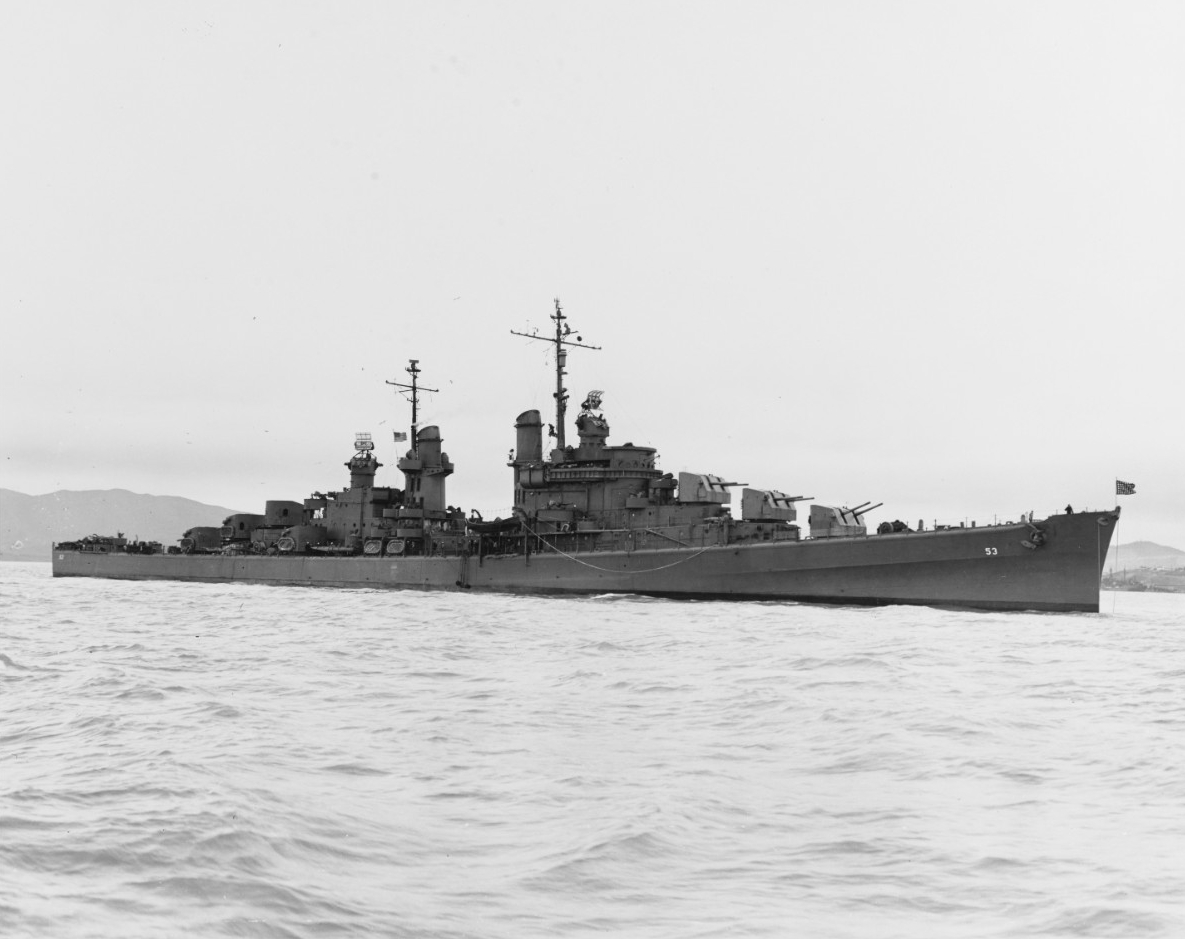 This week’s Webpage of the Week is new to NHHC’s notable ships. Antiaircraft light cruiser USS San Diego was commissioned on Jan. 10, 1942, with Capt. Benjamin F. Perry in command. After shakedown in the Chesapeake Bay, San Diego set sail for the U.S. west coast—via the Panama Canal—and arrived at her southern California namesake city on May 16, 1942. On 15 June, she began escort duty for USS Hornet in the South Pacific, and in early August, San Diego participated in the first American offensive effort of the war—the invasion of the Solomons at Guadalcanal. The powerful Imperial Japanese Navy fiercely contested the Allied thrust into the Solomons causing heavy damage to American ships. San Diego was witness to the sinking of USS Wasp on 15 September and of Hornet on 26 October. In addition, the ship provided antiaircraft support to USS Enterprise during the Naval Battle of Guadalcanal from November 12–15. After several months battling the Japanese in the dangerous waters of the Solomons, San Diego steamed to Auckland, New Zealand, for replenishment. For more on the ship that would go on to earn 15 battle stars for exceptional World War II service, check out this page today. It contains a short history, suggested reading, interviews with crewmembers, selected imagery, and much more. 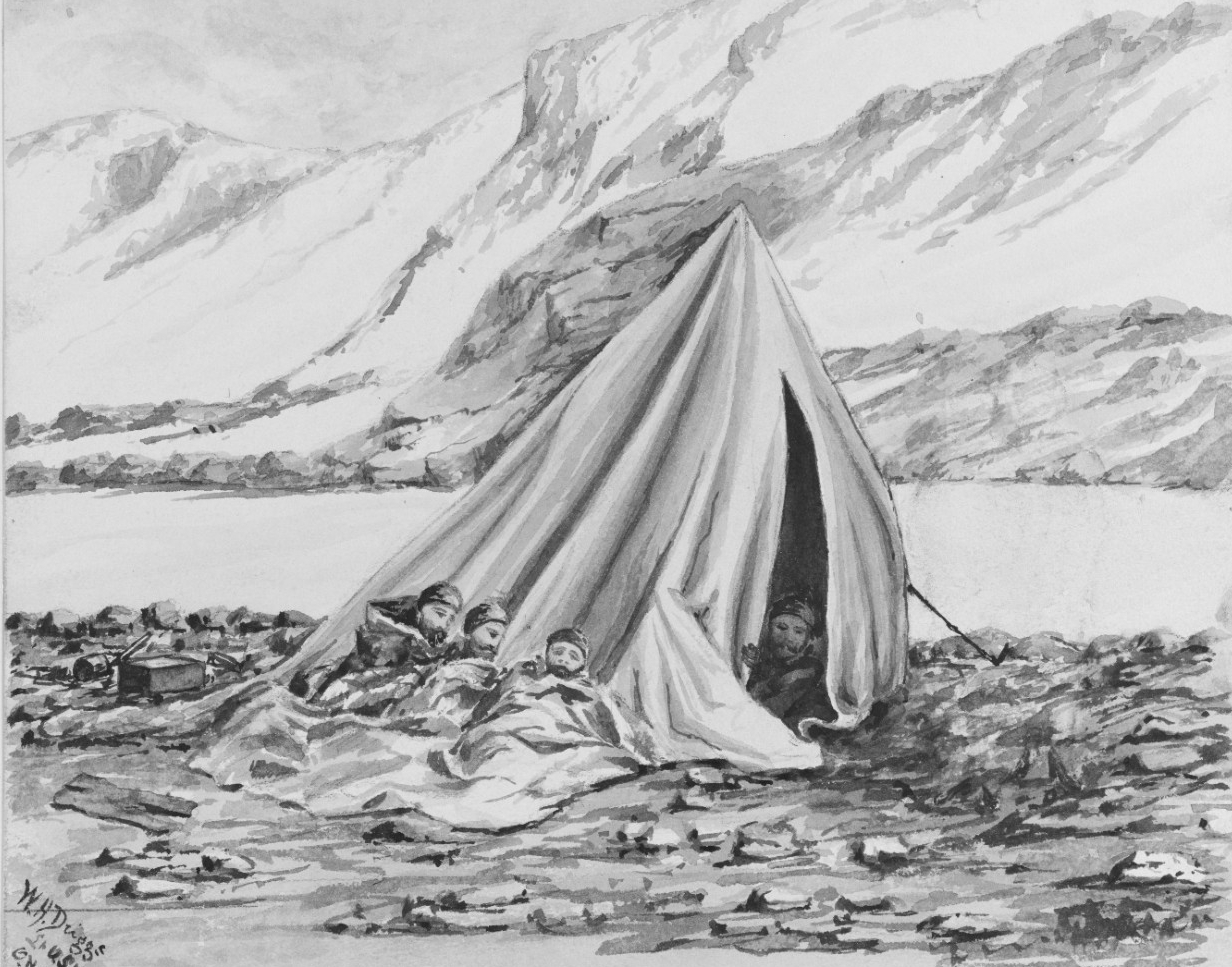 On June 22, 1884, U.S. naval ships Thetis, Alert, and Bear, under Cmdr. Winfield S. Schley, rescued Lt. Adolphus W. Greely and six of his exploring party from Cape Sabine, where they were marooned for three years. The Greely Expedition’s purpose, which began in 1881, was to establish a meteorological-observation station, and to collect astronomical and magnetic data. Greely volunteered to lead the expedition in the Arctic with about 25 men. However, problems receiving supplies began as ships could not make it to their location. Greely, who was known as a strict leader, kept the expedition and morale alive. It was not until the final six months of their ordeal, when rations had shrunk to nearly nothing that order within the camp began to break down. By the time the men were rescued, only 7 of the original party of 25 survived.  The rest of the party succumbed to starvation, hypothermia, or drowning. One man was shot for continually stealing food. Secretary of the Navy William E. Chandler was credited for planning the rescue effort and coordinating his plans with Schley.