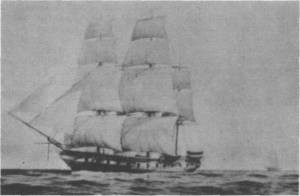 Cumberland, a frigate, was launched 24 May 1842 by Boston Navy Yard, Her first commanding officer was Captain S. L. Breese, and her first service was as flagship of the Mediterranean Squadron from 1843 to 1845 where she had among her officers men like Foote and Dahlgren. She was flagship of the Home Squadron between February and December 1846, serving in the Gulf of Mexico during the Mexican War. Continuing to serve in the Home Squadron she returned to the United States in July 1848.

The first Cumberland made her second cruise to the Mediterranean from 1849 to 1851, returning as flagship of the squadron there from 1852 to 1855. From 1857 to 1859 she cruised on the coast of Africa as flagship of the African Squadron patrolling for the suppression of the slave trade, then became flagship of the Home Squadron in 1860. At the outbreak of the Civil War Cumberland was at Norfolk Navy Yard, just returned from Vera Cruz, Mexico. Towed out of the yard she escaped destruction when other ships there were scuttled and burned by Union forces 20 April 1861 to prevent their capture by the Confederates. She served as one of the North Atlantic Blockading Squadron until 8 March 1862 when she was rammed and sunk in an engagement with the Confederate ironclad Virginia (formerly USS Merrimack) at Newport News, Va.