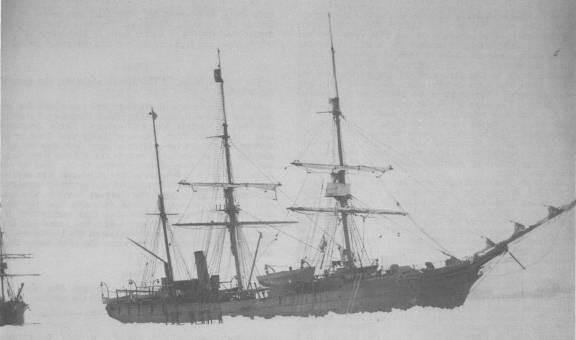 Caption: Thetis (center) and Bear (left), hampered by ice during their search for the Greely expedition, 1884.

A sea nymph of Greek Mythology. She was the daughter of the sea god Nereus and the mother of the Trojan War hero Achilles.

The first Thetis, a three-masted, wooden-hulled steam whaler built in 1881 at Dundee, Scotland, by Alexander Stephen & Sons, was acquired by the Navy on 2 February 1884 to be employed by the expedition to relieve the polar exploration party under the command of Lt. Adolphus W. Greely, U.S.A. She sailed from Dundee under the command of Lt. L. L. Reamey and arrived in New York on 23 March 1884.

After more than a month of preparations, Thetis- now under the command of Comdr. Winfield Scott Schley, who also headed the relief squadron, departed New York on 1 May. Ice flows and heavy weather hampered the search all along the way. Thetis did not even reach Upernavik, Greenland, her jumping-off point, until the latter part of the month. She departed that port on the 29th in company with Bear and headed north. Along the way, she made stops at the Duck Islands, Cape York, and Littleton Island, arriving at the latter on 21 June. At Littleton Island, her search parties found evidence that Lt. Greely's expedition had stopped there but moved on. They were on the right track. The next day, she moved on to Payer's Harbor and landed search parties on Brevoort Island. More evidence that Greely's party had passed that way also indicated the dire straits in which the expedition found itself. Later that day, the two ships rounded Cape Sabine and, while fighting a howling gale, found Lt. Greely and six companions, alive, but weak from exposure and malnutrition. The other 20 members of the expedition had perished. The following day, the two ships headed south with their precious cargo. After stops at Upernavik, Godhaven, and St. John's, the relief expedition arrived in Portsmouth, N.H., on 1 August. During the five-day stay, rescuers and rescued alike received a tumultuous welcome by the assembled North Atlantic Squadron and enjoyed a warm reception given by the people of Portsmouth. On 5 August, the rescue ships continued south toward New York where they arrived on the 8th. On 26 November 1884, Thetis was placed out of commission and was laid up at New York.

After more than two years of inactivity, Thetis was recommissioned at New York on 15 January 1887, Lt. William H. Emory, Jr., in command. Between mid-January and mid-March, the ship was fitted out as a gunboat and prepared for a cruise around Cape Horn to the west coast. She departed New York on 24 March and began an eight-month voyage during which she stopped at Rio de Janeiro, Brazil; Montevideo, Uruguay; Valparaiso, Chile; and Callao, Peru.

On 13 October, Thetis sailed into San Francisco for voyage repairs prior to a brief cruise to Alaskan waters. She departed the Mare Island Navy Yard on 16 November and arrived at Sitka, Alaska, on 4 December. She returned to Mare Island on 9 January 1888 and remained there until 8 April when she embarked upon an extended cruise in Alaskan waters. She returned to Sitka on 18 May and, for the next five months, conducted survey work as far north as Point Barrow, visiting Unalaska, St. Michaels, East Cape, and Cape Sabine. On 1 November, she headed south from Sitka and entered San Francisco Bay on the 25th. She spent the following five months at the Mare Island Navy Yard, undergoing repairs and preparing for another Alaska survey assignment. Thetis steamed out from the Golden Gate on 20 April and shaped a course north to Sitka, where she arrived on 2 June. Another five months of survey work along the Alaskan coast followed-punctuated again with visits to Unalaska and Point Barrow. She returned to San Francisco on 7 December.

Thetis remained at the Mare Island Navy Yard until July 1890 when she sailed for Central America. A revolution had recently broken out in San Salvador, and the insurgents quickly seized power. However, forces of the old government retired to Guatemala which they used as a base for counter-revolutionary operations. This precipitated war between the two countries. By 27 July, Thetis was at San Jose, Guatemala, beginning a four-month cruise along the coasts of Guatemala and San Salvador to protect American lives and property during the war. During that period, she called several times at La Libertad and Acajulta in San Salvador and at La Union and Ampala, Honduras, in addition to San Jose, Guatemala. By October, conditions in Central America had quieted sufficiently to allow Thetis to return to San Francisco, where she arrived on the 27th. Two days later, she reentered the Mare Island Navy Yard and remained there until the following June.

At mid-month, she departed San Francisco on a four-month assignment in Alaskan waters conducting survey work and patrolling to protect fur seals from poachers. She returned south to San Francisco late in 1891 and remained until the beginning of 1892. In the late spring, she made a brief voyage to the Hawaiian Islands, returning to San Francisco on 18 June. In January 1893, Thetis began survey work along the coast of the Baja California peninsula. For the next four years, she conducted those operations in waters between Magdalena Bay and the southern tip of the California peninsula. She returned periodically to San Diego and San Francisco for repairs and supplies. She concluded that duty in the spring of 1897 and arrived back in San Francisco on 24 April. In July 1897, the ship was placed "in ordinary" at Mare Island.

As a commissioned cutter in the Revenue Cutter Service, she spent the next 16 years cruising Alaskan waters bringing justice and carrying supplies to the frontier fringes. During that time, she was based both at Port Townsend, Wash., and San Francisco, Calif. In the spring of 1904, she made a voyage to the Hawaiian Islands to transport illegal Japanese aliens from Lisianski Island to Honolulu. Late in 1909, she returned to Honolulu. From then until the end of her career, she alternated duty in the islands with annual cruises to Alaskan waters.

On 27 April 1916, Thetis ended her last voyage for the government at San Francisco. Three days later, she was placed out of commission. On 3 June, she was sold to W. & S. Job & Co. of New York City. Ironically, after years of service on the patrol against seal poachers in the Pacific, she was converted into a sealer herself and operated out of Newfoundland for the next 34 years. In 1950, her hulk was purposely grounded off St. Johns, and she remained there until she broke up.