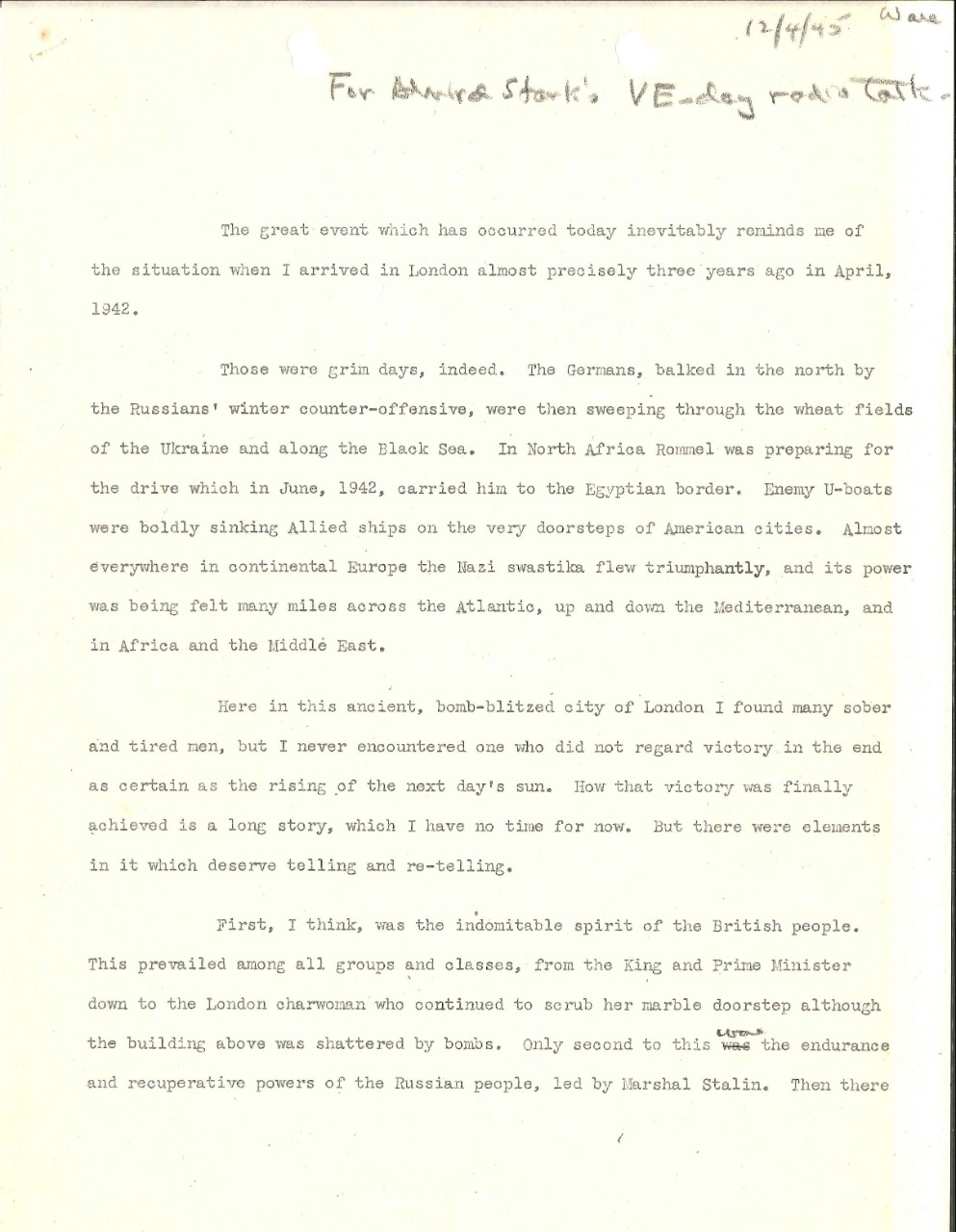 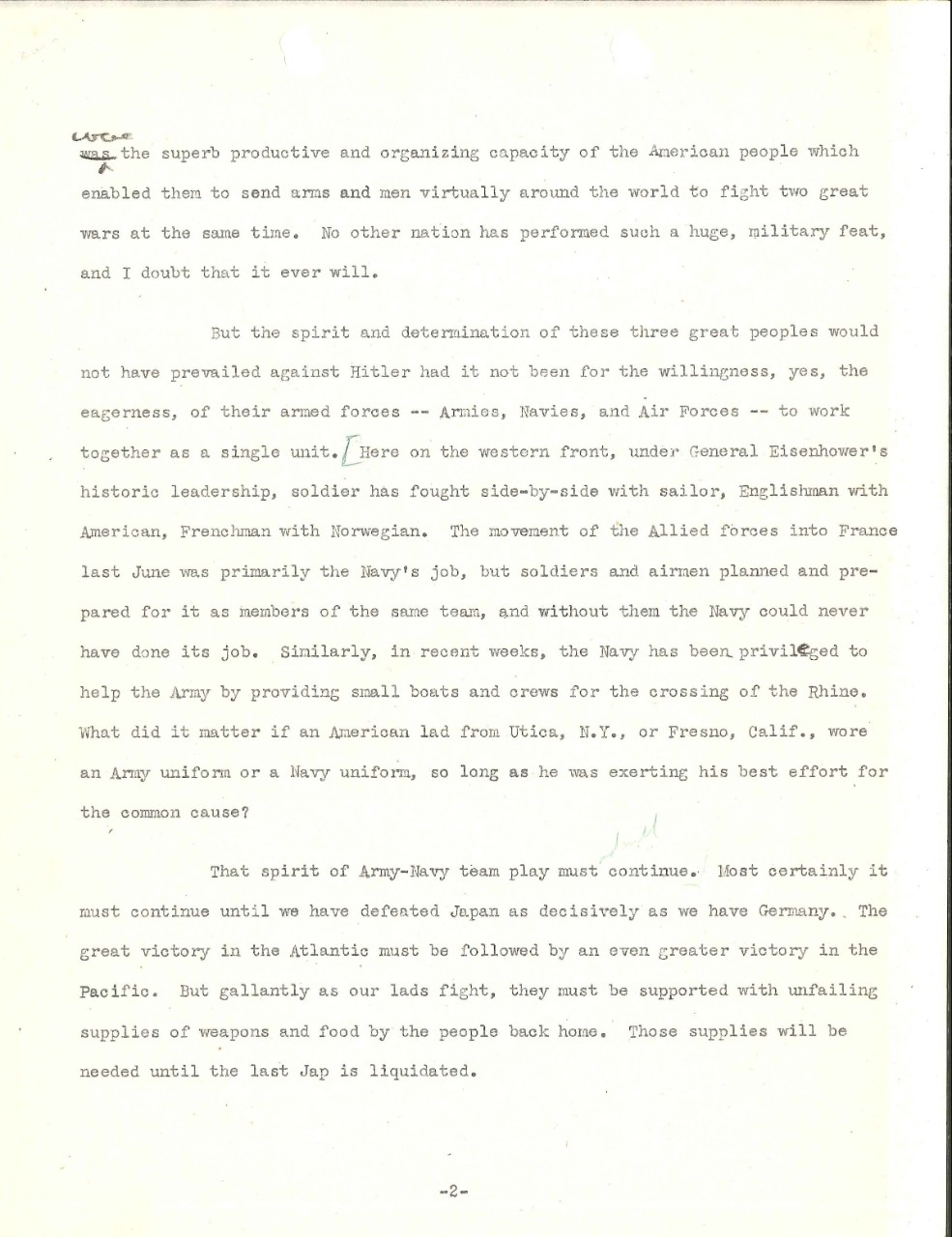 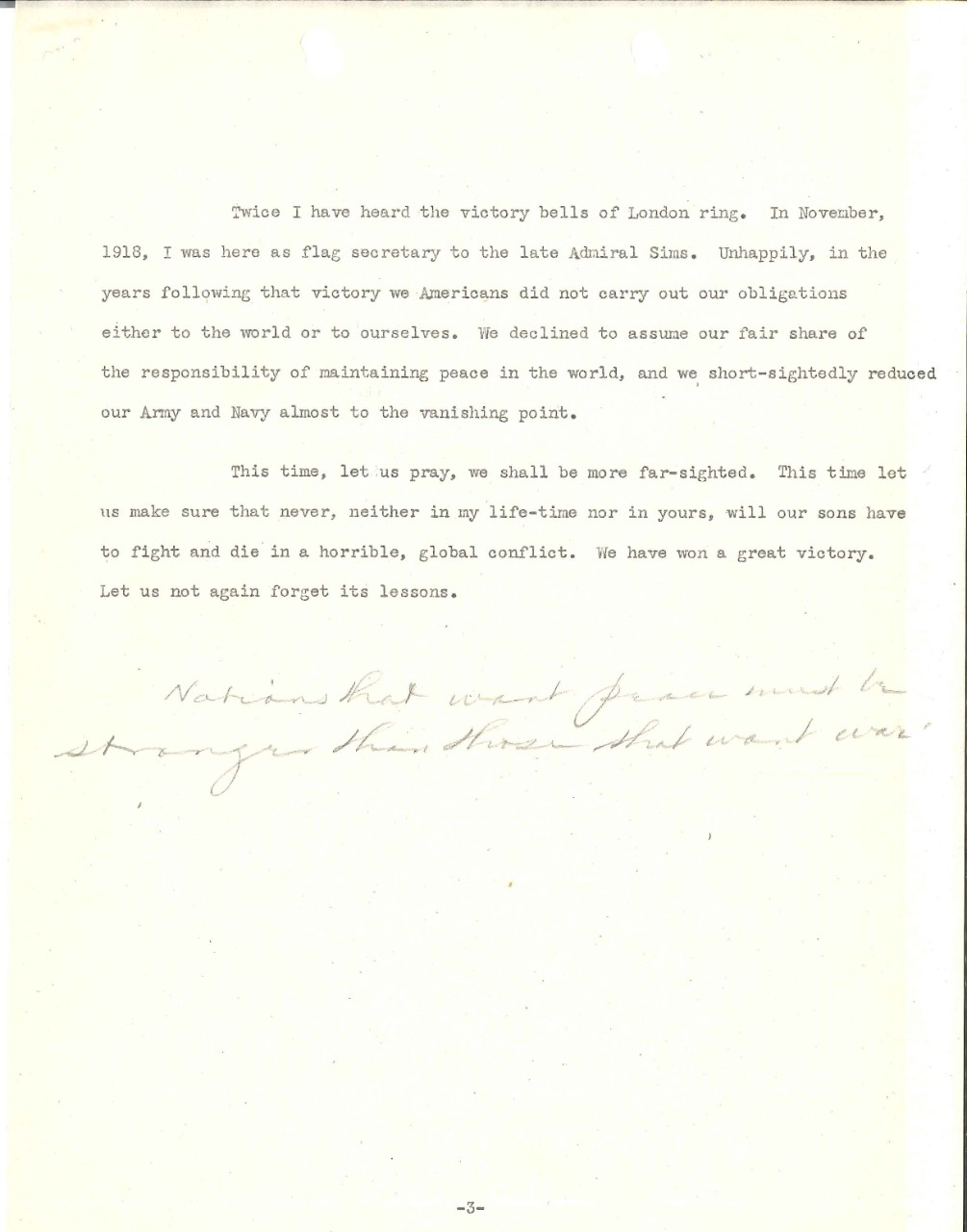 The great even which has occurred today inevitably reminds me of the situation when I arrived in London almost precisely three years ago in April 1942.

Those were grim days, indeed. The Germans, balked in the north by the Russians' winter counter-offensive, were then sweeping through the wheat fields of the Ukraine and along the Black Sea. In North Africa Rommel was preparing for the drive which in June, 1942, carried him to the Egyptian border. Enemy U-boats were boldly sinking Allied ships on the very doorsteps of American cities. Almost everywhere in continental Europe the Nazi swastika flew triumphantly, and its power was being felt many miles across the Atlantic, up and down the Mediterranean, and in Africa and the Middle East.

Here in this ancient, bomb-blitzed city of London I found many sober and tired men, but I never encountered one who did not regard victory in the end as certain as the rising of the next day's sun. How that victory was finally achieved is a long story, which I have no time for now. But there were elements in it which deserve telling and re-telling.

First, I think, was the indomitable spirit of the British people. This prevailed among all groups and classes, from the King and Prime Minister down to the London charwoman who continued to scrub her marble doorstep although the building above was shattered by bombs. Only second to this was the endurance and recuperative powers of the Russian people, led by Marshal Stalin. Then there were the superb productive and organizing capacity of the American people which enabled them to send arms and men virtually around the world to fight two great wars at the same time. No other nation has performed such a huge, military feat, and I doubt that it ever will.

But the spirit and determination of these three great peoples would not have prevailed against Hitler had it not been for the willingness, yes, the eagerness, of their armed forces - Armies, Navies, and Air Forces - to work together as a single unit. Here on the western front, under General Eisenhower's historic leadership, soldier has fought side-by-side with sailor, Englishman with American, Frenchman with Norwegian. The movement of the Allied forces into France last June was primarily the Navy's job, but soldiers and airmen planned and prepared for it as members of the same team, and without them the Navy could never have done its job. Similarly, in recent weeks, the Navy has been privileged to help the Army by providing small boats and crews for the crossing of the Rhine. What did it matter if an American lad from Utica, N.Y., or Fresno, Calif., wore an Army uniform or a Navy uniform, so long as he was exerting his best effort for the common cause?

That spirit of Army-Navy team play must [and will] continue. Most certainly it must continue until we have defeated Japan as decisively as we have Germany. The great victory in the Atlantic must be followed by an even greater victory in the Pacific. But gallantly as our lads fight, they must be supported with unfailing supplies of weapons and food by the people back home. Those supplies will be needed until the last Jap is liquidated.

Twice I have heard the victory bells of London ring. In November, 1918, I was here as flag secretary to the late Admiral Sims. Unhappily, in the years following that victory we Americans did not carry out our obligations either to the world or to ourselves. We declined to assume our fair share of the responsibility of maintaining peace in the world, and we short-sightedly reduced our Army and Navy almost to the vanishing point.

This time, let us pray, we shall be more far-sighted. This time let us make sure that never, neither in my life-time nor in yours, will our sons have to fight and die in a horrible, global conflict. We have won a great victory. Let us know again forget its lessons.

Nations that want peace must be stronger than those that want war.