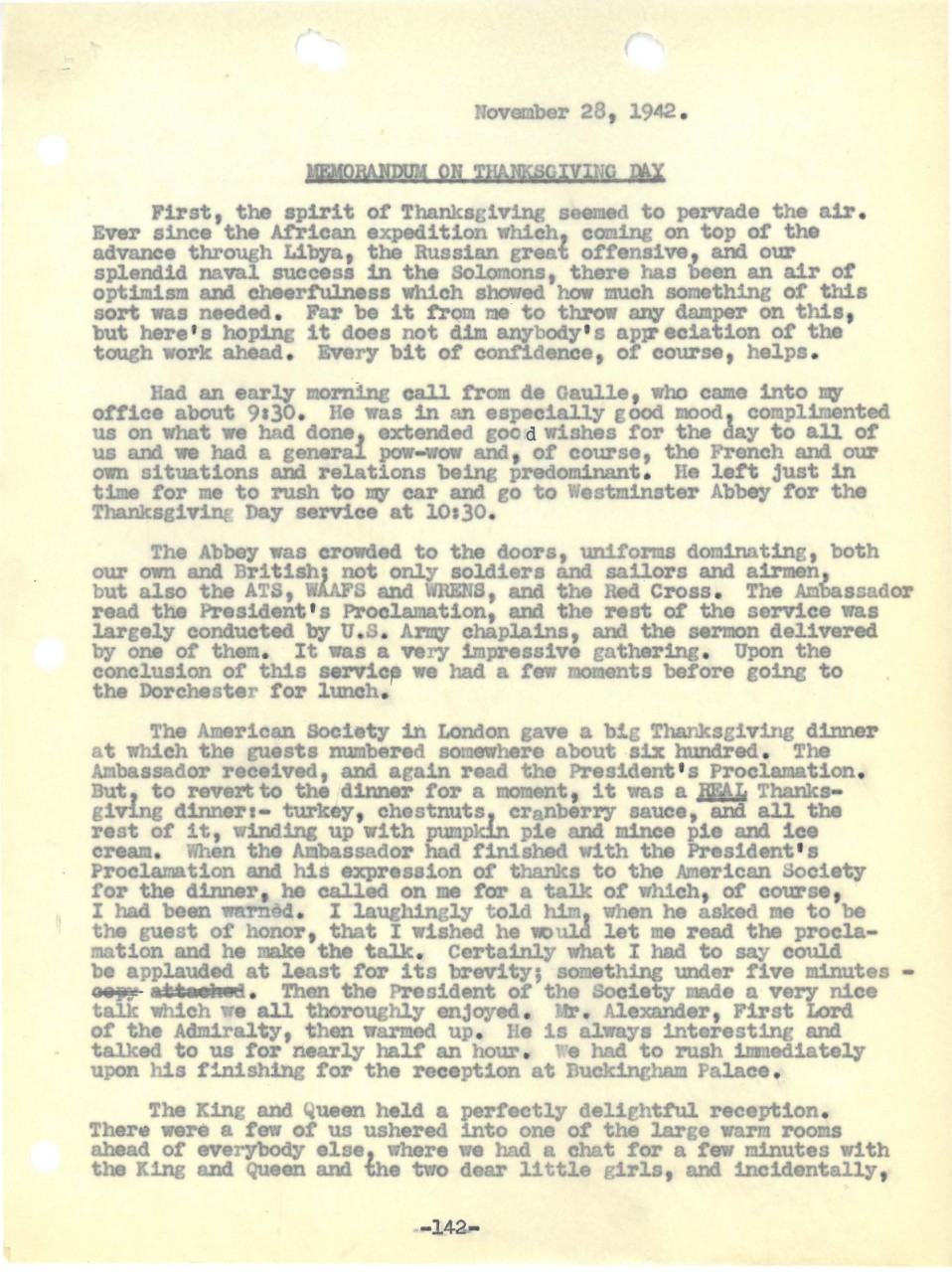 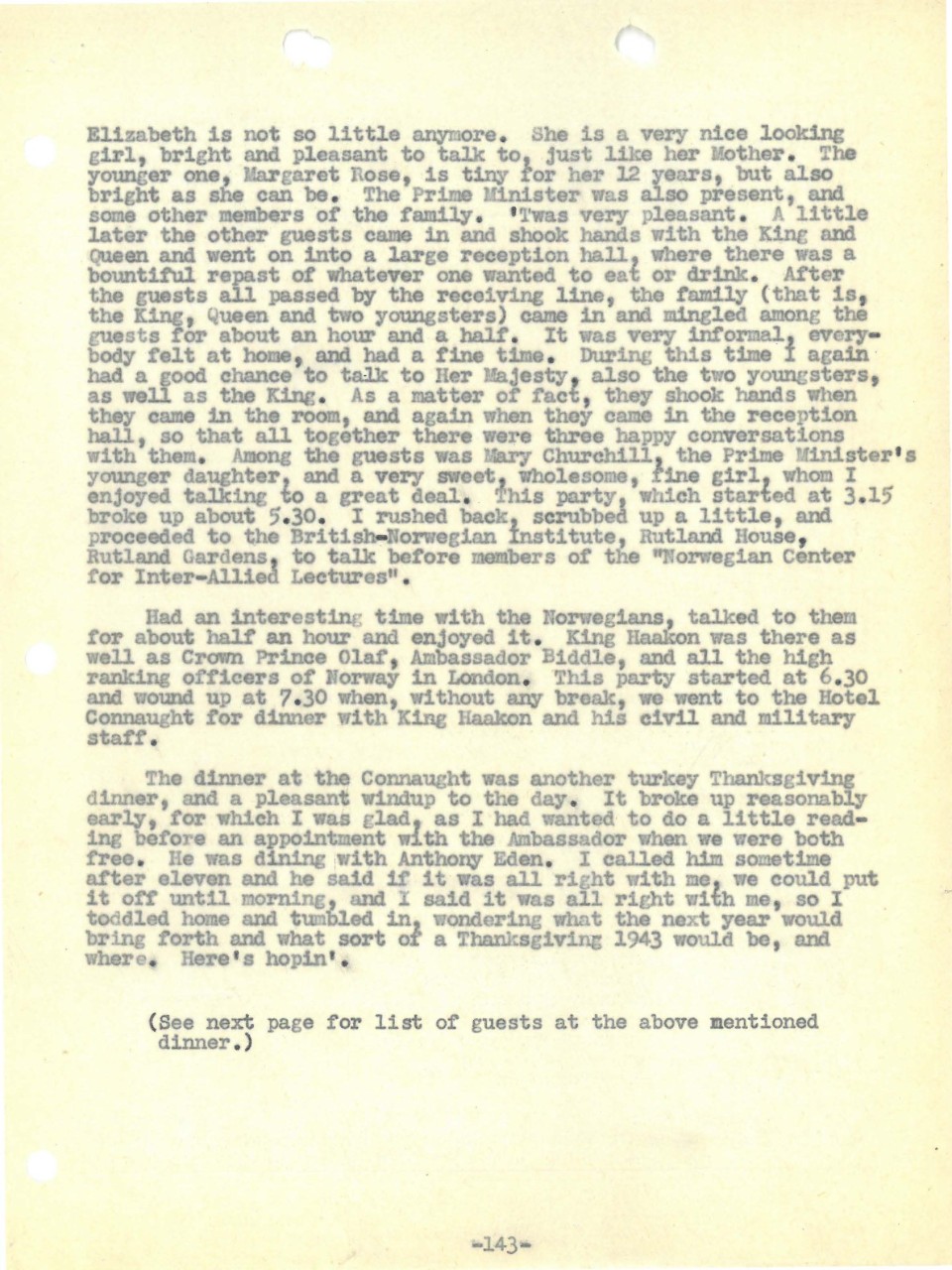 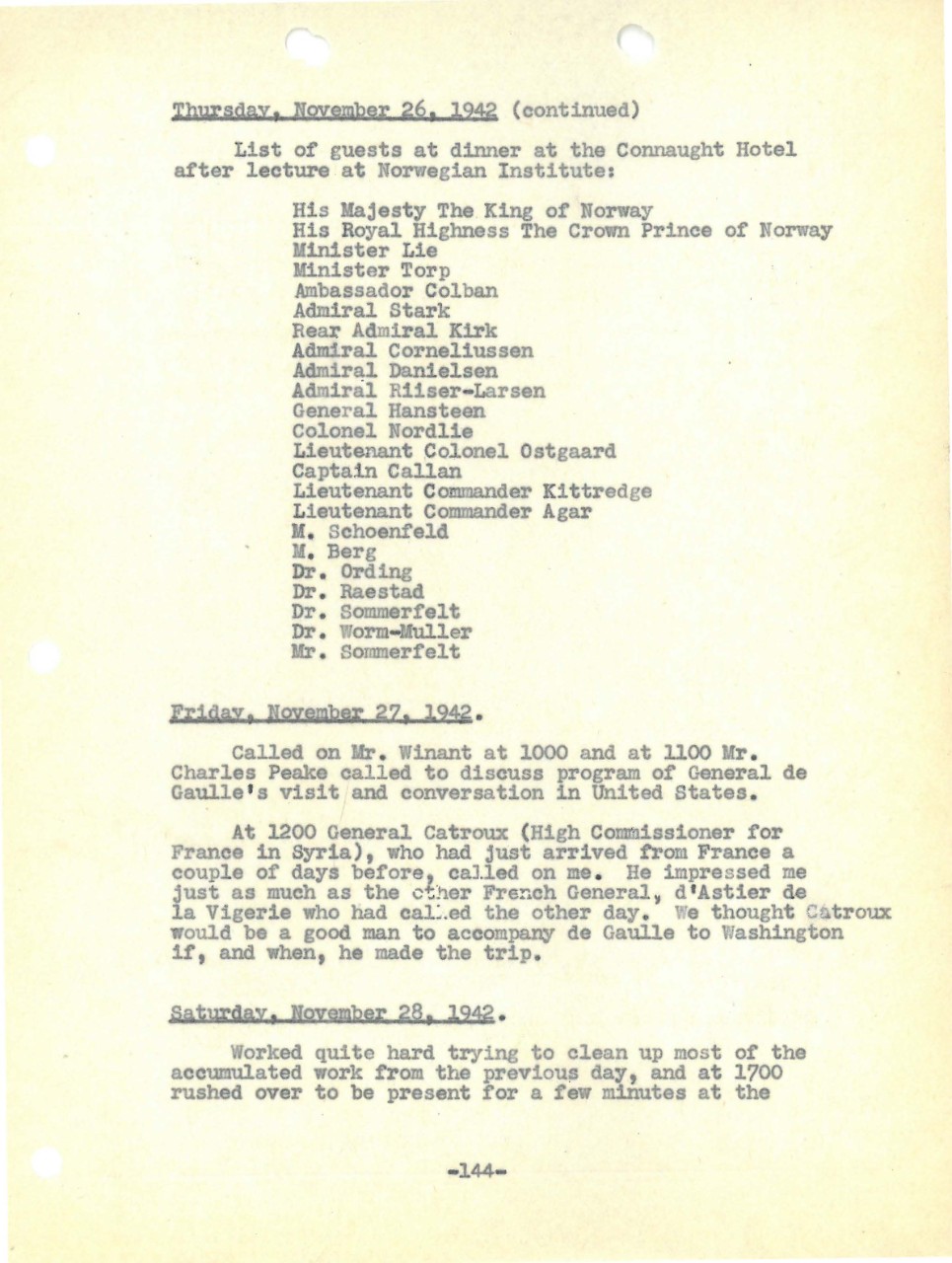 First, the spirit of Thanksgiving seemed to pervade the air.

Ever since the African expedition which, coming on top of the

advance through Libya, the Russian great offensive, and our

splendid naval success in the Solomons, there has been an air of

optimism and cheerfulness which showed how much something of this

sort was needed. Far be it from me to throw any damper on this,

tough work ahead. Every bit of confidence, of course, helps.

Had an early morning call from de Gaulle, who came into my

office about 9:30. He was in an especially good mood, complimented

us on what we had done, extended good wishes for the day to all of

us and we had a general pow-wow and, of course, the French and our

own situations and relations being predominant. He left just in

The Abbey was crowded to the doors, uniforms dominating, both

our own and British; not only soldiers and sailors and airmen,

but also the ATS, WAAFS and WRENS, and the Red Cross. The Ambassador

read the President’s Proclamation, and the rest of the service was

largely conducted by U.S. Army chaplains, and the sermon delivered

by one of them. It was a very impressive gathering. Upon the

the Dorchester for lunch.

The American Society in London gave a big Thanksgiving dinner

at which the guests numbered somewhere about six hundred. The

But, to revert to the dinner for a moment, it was a REAL Thanks-

giving dinner: - turkey, chestnuts, cranberry sauce, and all the

rest of it, winding up with pumpkin pie and mince pie and ice

cream. When the Ambassador had finished with the President’s

Proclamation and his expression of thanks to the American Society

for the dinner, he called on me for a talk of which, of course,

I had been warned. I laughingly told him, when he asked me to be

the guest of honor, that I wished he would let me read the procla-

mation and he make the talk. Certainly what I had to say could

be applauded at least for its brevity; something under five minutes –

[copy attached]. Then the President of the Society made a very nice

talk which we all thoroughly enjoyed. Mr. Alexander, First Lord

of the Admiralty, then warmed up. He is always interesting and

talked to us for nearly half an hour. We had to rush immediately

upon his finishing for the reception at Buckingham Palace.

The King and Queen held a perfectly delightful reception.

ahead of everybody else, where we had a chat for a few minutes with

the King and Queen and the two dear little girls, and incidentally,

Elizabeth is not so little anymore. She is a very nice looking

girl, bright and pleasant to talk to, just like her Mother. The

younger one, Margaret Rose, is tiny for her 12 years, but also

bright as she can be. The Prime Minister was also present, and

some other members of the family. ‘Twas very pleasant. A little

Queen and went on into a larger reception hall, where there was a

bountiful repast of whatever one wanted to eat or drink. After

the guests all passed by the receiving line, the family (that is,

the King, Queen and two youngsters) came in and mingled among the

guests for about an hour and a half. It was very informal, every-

body felt at home, and had a fine time. During this time I again

had a good chance to talk to Her Majesty, also the two youngsters,

as well as the King. As a matter of fact, they shook hands when

hall, so that all together there were three happy conversations

with them. Among the guests was Mary Churchill, the Prime Minister’s

younger daughter, and a very sweet, wholesome, fine girl, whom I

enjoyed talking to a great deal. This party, which started at 3.15

broke up about 5.30. I rushed back, scrubbed up a little, and

Rutland Gardens, to talk before members of the “Norwegian Center

Had an interesting time with the Norwegians, talked to them

for about half an hour and enjoyed it. King Haakon was there as

well as Crown Prince Olaf, Ambassador Biddle, and all the high

ranking officers of Norway in London. This party started at 6.30

and wound up at 7.30 when, without any break, we went to the Hotel

Connaught for dinner with King Haakon and his civil and military

The dinner at the Connaught was another turkey Thanksgiving

dinner, and a pleasant windup to the day. It broke up reasonably

early, for which I was glad, as I had wanted to do a little read-

ing before an appointment with the Ambassador when we were both

free. He was dining with Anthony Eden. I called him sometime

after eleven and he said if it was all right with me, we could put

it off until morning, and I said it was all right with me, so I

toddled home and tumbled in, wondering what the next year would

bring forth and what sort of a Thanksgiving 1943 would be, and

(See next page for list of guests at the above mentioned

List of guests at dinner at the Connaught Hotel

after lecture at Norwegian Institute:

His Majesty The King of Norway

His Royal Highness The Crown Prince of Norway

At 1200 General Catroux (High Commissioner for

France in Syria), who had just arrived from France a

couple of days before, called on me. He impressed me

just as much as the other French General, d’Astier de

la Vigerie who had called the other day. We thought Catroux

would be a good man to accompany de Gaulle to Washington

if, and when, he made the trip.

Worked quite hard trying to clean up most of the

accumulated work from the previous day, and at 1700

rushed over to be present for a few minutes at the