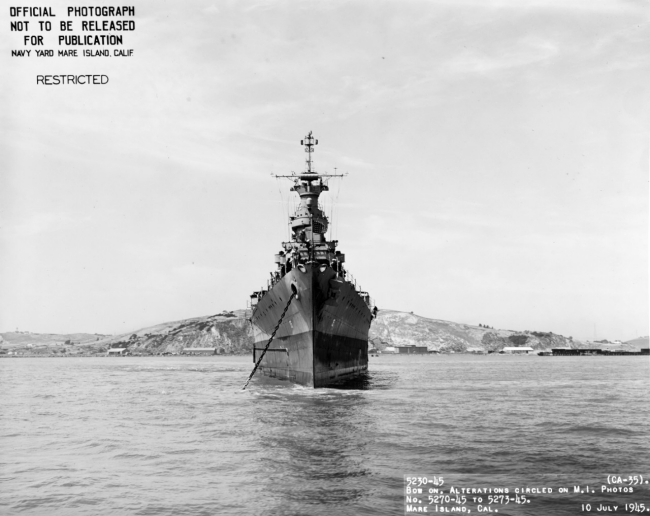 19-N-86913, bow view of Indianapolis after final overhaul, Mare Island, 10 July 1945. This series of photographs was taken days before Indianapolis steamed for Tinian to deliver components for the A-Bomb. NHHC Photographic Section. This photo has been released and is available for public use.

The linked documents below show routing instructions given to USS Indianapolis for Convoy Route Peddie and the intelligence provided regarding enemy locations.  The Convoy Route Peddie chart was used as an exhibit in the court of inquiry convened to determine fault for the loss of Indianapolis.  Points marked on the route indicate the movement of Indianapolis along Peddie and her estimated sinking location.  Also included are excerpts from the deck logs of LST-779 the last U.S. ship to make visual contact before Indianapolis sank, approximately eleven hours prior to the sinking.  Also included among the documents is a hand drawn sketch of I-58’s attack on Indianapolis drawn by its captain, Mochitsura Hashimoto, shortly after the war.