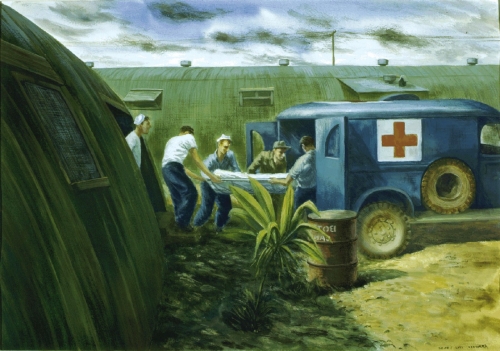 Painting by Navy Combat Artist Alexander Russo of Ambulance being loaded with Indianapolis survivors at Peleliu Base Hospital No. 20 (NHHC Art Section).

The collection of documents that follows provides a picture of how the rescue operations for USS Indianapolis survivors unfolded—from the accidental discovery of survivors in an oil slick on 2 August, through reports on survivors in Base Hospital No. 20 (Peleliu) on 6 August.  The initial rescue ship dispatches impart the urgency of the event.  While the Navy’s rescue was delayed due to failure of reporting Indianapolis’s non-arrival in Leyte, once initiated, participants in the rescue mission showed great initiative, bravery, and efficiency.  The documents summarizing the rescue operations particularly show how well the Navy’s surface and air components coordinated to get survivors out of the water.  Readers of the following documents will also get an understanding of the ordeal Indianapolis’s survivors went through and the devastating loss of life incurred.

4. Summation of Survivors and Casualty Numbers