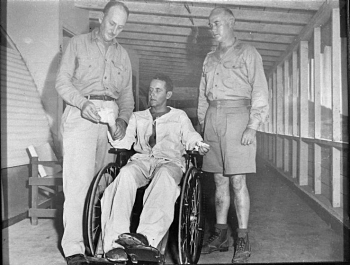 From:  The Commanding Officer.

To:  The Commander-in-Chief, United States Fleet.

Subject:  Action Report U.S.S. INDIANAPOLIS 450 miles east of Leyte Gulf 30 July 1945, Including Circumstances of the Resultant Sinking of the Ship.

At about 1130, 2 August the southern group of survivors were sighted by a Navy Ventura search plane.  At 1230 other Navy planes began arriving in the area to search and aid in rescue operations.  One whaleboat and several rubber life rafts were dropped.  The following rescue ships arrived on the scene at approximately 0030, 3 August:

These four ships commenced rescue operations immediately.  By noon 3 August, all survivors had been picked up.  149 were taken to Fleet Hospital #114, Samar by BASSETT.  169 were taken to Base Hospital #20 Peleiliu Island, Palau Group by CECIL DOYLE, RINGNESS, and REGISTER.

0005 Ship struck by one torpedo starboard side.

0008 Contact report sent to Radio I. (This did not go out due to power failure).

No Comments.  Submitted in separate correspondence.