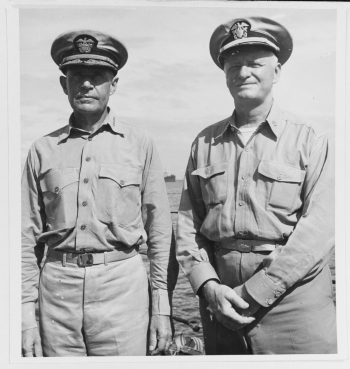 1. Original Document from Court of Inquiry

Headquarters of the Commander in Chief

The Commander in Chief, U.S. Pacific Fleet, does not agree with the court in its recommendation that Captain Charles B. McVay III, U.S. Navy, be brought to trial by general court martial.  He did incur blame for failure to send a distress message immediately after the explosions.  His failure to order a zig-zag course was an error in judgment, but not such nature as to constitute gross negligence.  Therefore, a letter of reprimand will be addressed to Captain McVay in lieu of a general court martial.

The Commander in Chief, U.S. Pacific Fleet, considers that blame was also incurred by Lieutenant Stewart B. Gibson, U.S. Naval Reserve, Port Director Operations Officer, Tacloban, Leyte Area, for his failure to bring to the attention of the Port Director, Tacloban, the fact that the INDIANAPOLIS was overdue and that he had received no supplementary movement report setting a new ETA, or announcing a change of orders.  A letter of reprimand will, therefore, be addressed to Lieutenant Gibson.  Blame was also incurred by Lieutenant Commander Jules E. Sancho, U.S. Naval Reserve, Acting Port Director, Tacloban, for not reporting the fact that INDIANAPOLIS was overdue.  Although he was only acting Port Director at the time of this incident, he cannot escape responsibility.  A letter of admonition will be addressed to Lieutenant Commander Sancho.

It is noted that Captain McVay and Lieutenant Gibson were not designated defendants, as required by Section 734, Naval Courts and Records.  However, the court did accord them all the rights of defendants, including the right to make an argument in their own behalf, which Lieutenant Gibson did.  Since they were each accorded all the rights of defendants they were not prejudiced by the court’s failure to refer to them as such.  It is also noted that the court is of the opinion that the record contains matter of interest in the cases of the following:  Rear Admiral Lynde D. McCormick, U.S. Navy, Commodore Norman C. Gillette, U.S. Navy Commodore Jacob H. Jacobsen, U.S. Navy Captain Alfred M. Gramm, U.S. Navy, and Lieutenant Commander Jules E. Sancho, U.S. Navy Reserve.  The court erred in failing to accord the rights of defendants to the above named officers.  Statements have been obtained from each of the above, except Rear Admiral McCormick, and are attached as part of the record in accordance with 736 (c), Naval Courts and Boards.  It is not considered practicable to hold the record longer for receipt of the statement from Rear Admiral McCormick.  When received by the convening authority, it shall be forwarded to the Judge Advocate General with a copy of this record.

The Commander in Chief, U.S. Pacific Fleet, is of the opinion that the court should have further investigated the matter of the receipt of CINPAC dispatch 260152 of July by Commander Task Group Ninety-Five Point Seven to arrange a ten day training period for the INDIANAPOLIS in the Leyte Area.  However, it is not considered practicable to return the record for such action.  By copy of this endorsement, Commander Task Group 95.7 is directed to take necessary disciplinary action with regard to blame incurred by his communications staff regarding above dispatch.

Recommendation number three is approved in principle.  A revision of PacFleet Letter 10CL-45 providing for peacetime movement reports is soon to be published, and this revision will include specific instructions as to action to be take in the case of non-arrival vessels.

Subject to the foregoing remarks, the proceedings, findings, opinions, and recommendations of this Court of Inquiry in the attached case are approved.