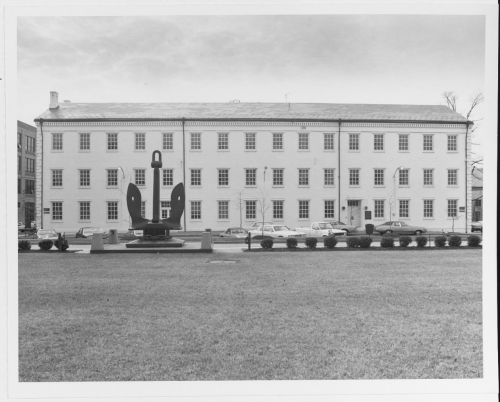 Building 57 of the Dudley Knox Center for Naval History, Washington Navy Yard, as seen from Leutze Park, December 1983. Captain McVay's court martial took place on the third deck of Building 57 in the upper left corner. Out the window Captain McVay could view the quarters his father, Admiral Charles McVay, Jr., resided in as Commandant of the Yard in 1920, NH 95295.

MEMORANDUM FOR: THE SECRETARY OF THE NAVY

RECORD OF PROCEEDINGS OF A GENERAL COURT-MARTIAL CONVENED AT THE NAVY YARD, WASHINGTON, D. C. BY ORDER OF THE SECRETARY OF THE NAVY

At this point the accused object to the last question on the ground that the judge advocate was putting words into the witness’s mouth.

The question was repeated.

The judge advocate replied, stating that he would rephrase the question.

The witness was duly warned.

No witnesses not otherwise connected with the trial were present.

Mochitsura Hashimoto, Japanese enemy alien, the witness under examination when the recess was taken, entered.  He was warned (through interpreter Eastlake) that the oaths previously taken by him were still binding, and continued his testimony.

(Examination by the judge advocate continued.)

The witness drew a rough sketch as requested to.

The rough sketch, last above referred to, was submitted to the accused and to the court, and by the judge advocate offered in evidence in connection with the charges and specifications for which the accused was on trial.

There being no objection, it was so received, appended, marked “Exhibit 10.”

Cross-examined by the accused:

The witness traced, on the chart marked “Exhibit 9 for identification,” the approximate course last above referred to.

This question was objected to by the judge advocate on the ground that it was a double question.

The accused replied, stating that he would reframe the question.

Reexamined by the judge advocate:

The accused did not desire to recross-examine this witness.

Examined by the court.

Neither the judge advocate, the accused, nor the court desired further to examine this witness.

The witness said that he had nothing further to state.

The witness was duly warned and withdrew.