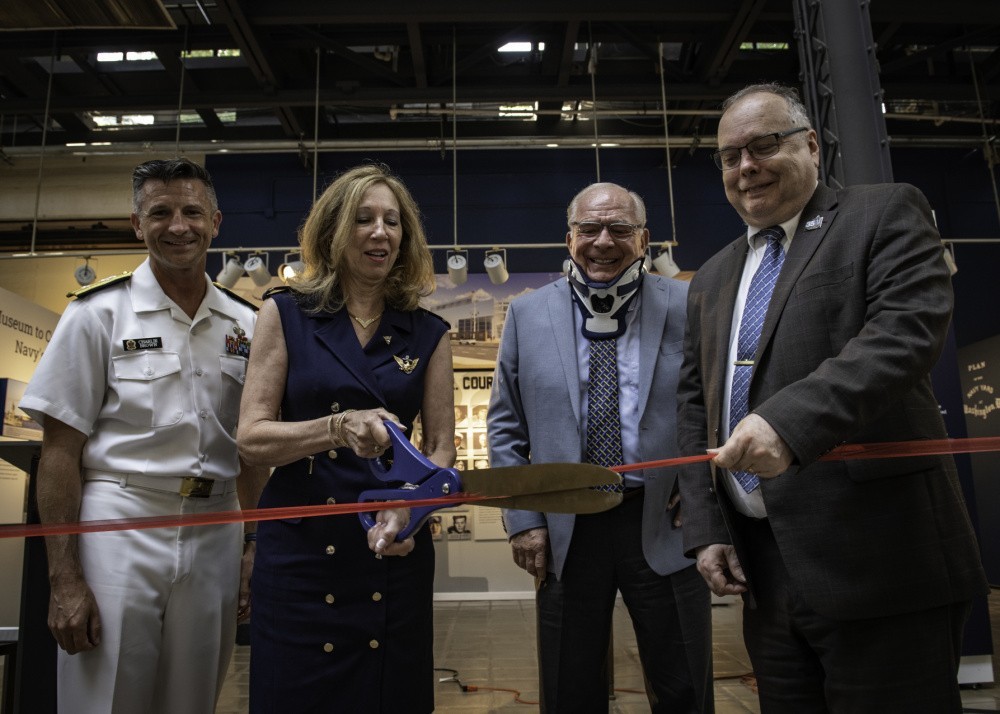 NHHC recently unveiled at the National Museum of the U.S. Navy (NMUSN) in Washington, DC, an exhibit entitled “Future Campus Vision,” which features development plans for the new NMUSN campus. The new campus is tentatively planned to open in 2025 with a proposed location in the vicinity of the Washington Navy Yard that allows access to the general public. The current NMUSN was established by Adm. Arleigh Burke in 1961 to house artifacts, but the building was not designed for long-term preservation. “This new exhibit gives us a glimpse into the future of our Navy’s history,” said Rear Adm. Charlie Brown, U.S. Navy Chief of Information. “These concepts are not just about a museum building, they are about a campus which will serve as a cultural center for future generations of Sailors.” The exhibit features artifacts from the original museum, but expands its focus on the new site development. “Our greatest partner, the U.S. public, wants to see their Navy in action and understand what they’ve been doing throughout history,” said NHHC Director Sam Cox. “This new museum will help us educate the public about our rich naval history and the legacy of valor and sacrifice of our Sailors, past and present.” For more on the exhibit, read the article. 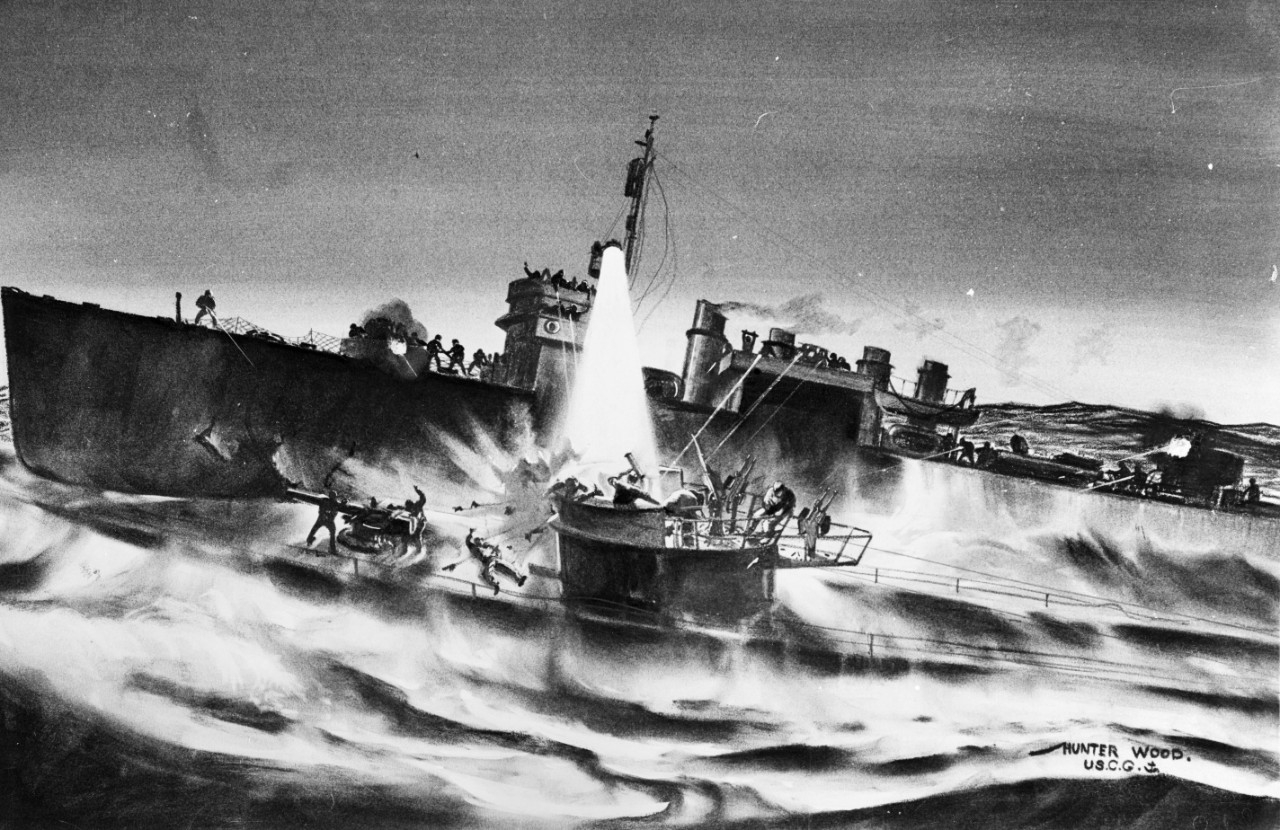 In his latest H-gram, NHHC Director Sam Cox covers several epic battles between U.S. surface ships and U-boats involving ramming and hand-to-hand combat, including the use of Coca Cola bottles, coffee mugs and pots, sheath knives, spent shell casings, flare pistols, hand grenades, shotguns, and Tommy guns as antisubmarine warfare weapons. One episode features USS Borie, one of the Navy’s oldest destroyers, commanded by the service’s youngest destroyer skipper: In the early morning darkness of Nov. 1, 1943, Borie was locked in 70 minutes of mortal close-quarters combat in heavy seas with a stubborn U-boat. While returning to her hunter-killer group, Borie encountered U-405. As Borie was in her first depth charge run, a malfunction caused every depth charge on the stern to roll in the water at once, resulting in a massive explosion that lifted Borie’s stern out of the water and brought the damaged U-405 to the surface. Unable to submerge, U-405 crewmen manned their guns and hit Borie with several 20mm rounds before a fusillade of fire from Borie killed most of the Germans on deck. For more on the epic close-quarters battle that ensued, read H-gram 064 at the Director’s Corner. 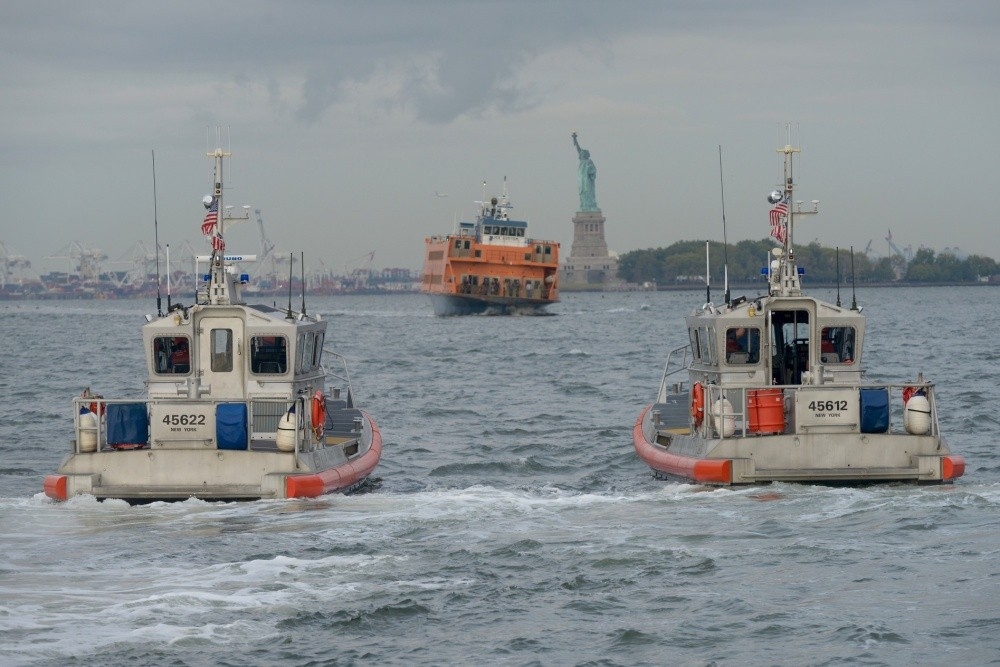 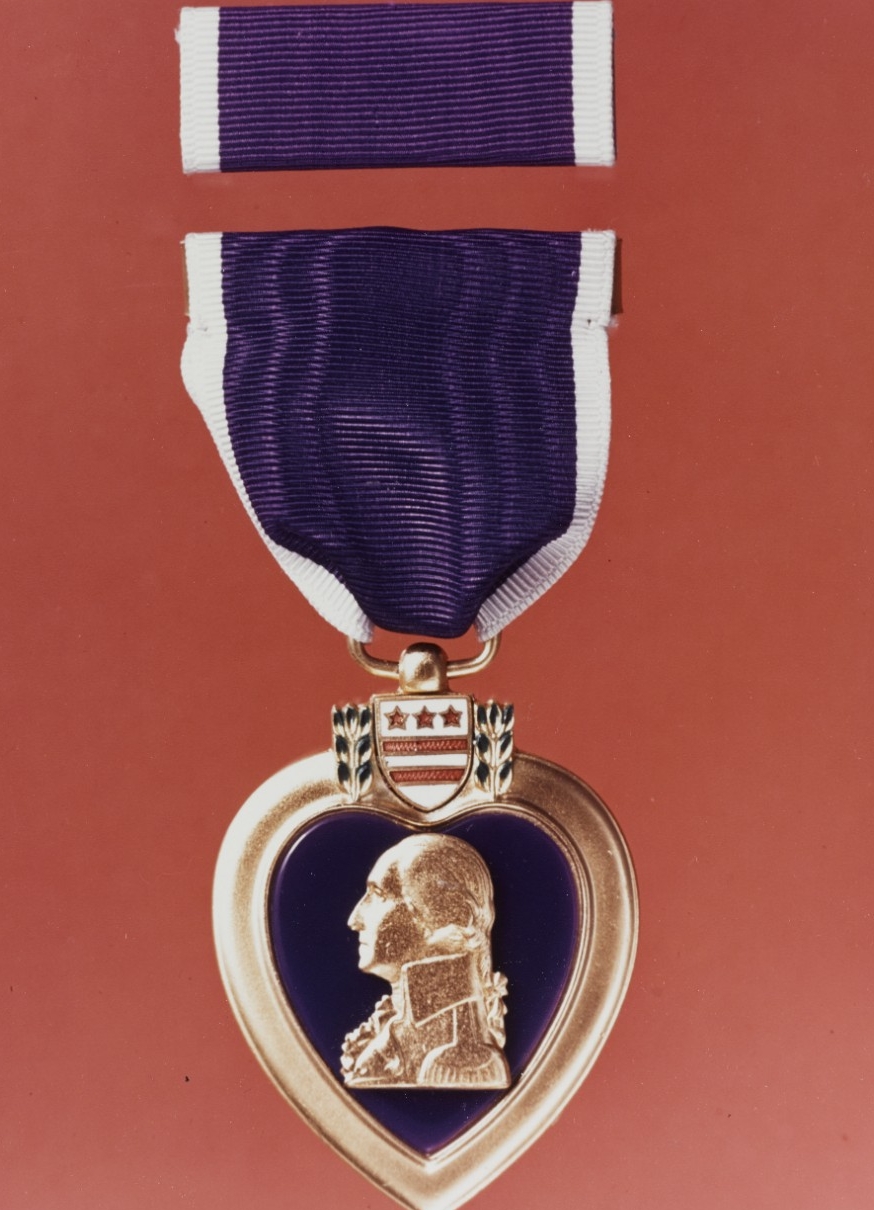 On Aug. 7, 1782, President George Washington ordered the establishment of the Badge of Military Merit, which was to be presented to Soldiers for “any singularly meritorious action.” Washington’s Badge of Military Merit was awarded to only three known Soldiers during the American Revolution and was mostly forgotten until Gen. Douglas MacArthur revived the award when he served as the Army’s chief of staff. On Feb. 22, 1932—Washington’s 200th birthday—the U.S. War Department announced the creation of the Purple Heart, a revival of Washington’s Badge of Military Merit. The Purple Heart is the oldest American military decoration for military merit and is awarded to members of the U.S. armed forces who have been killed or wounded in action against an enemy of the United States. Purple Heart Day was first observed on Aug. 7, 2014. 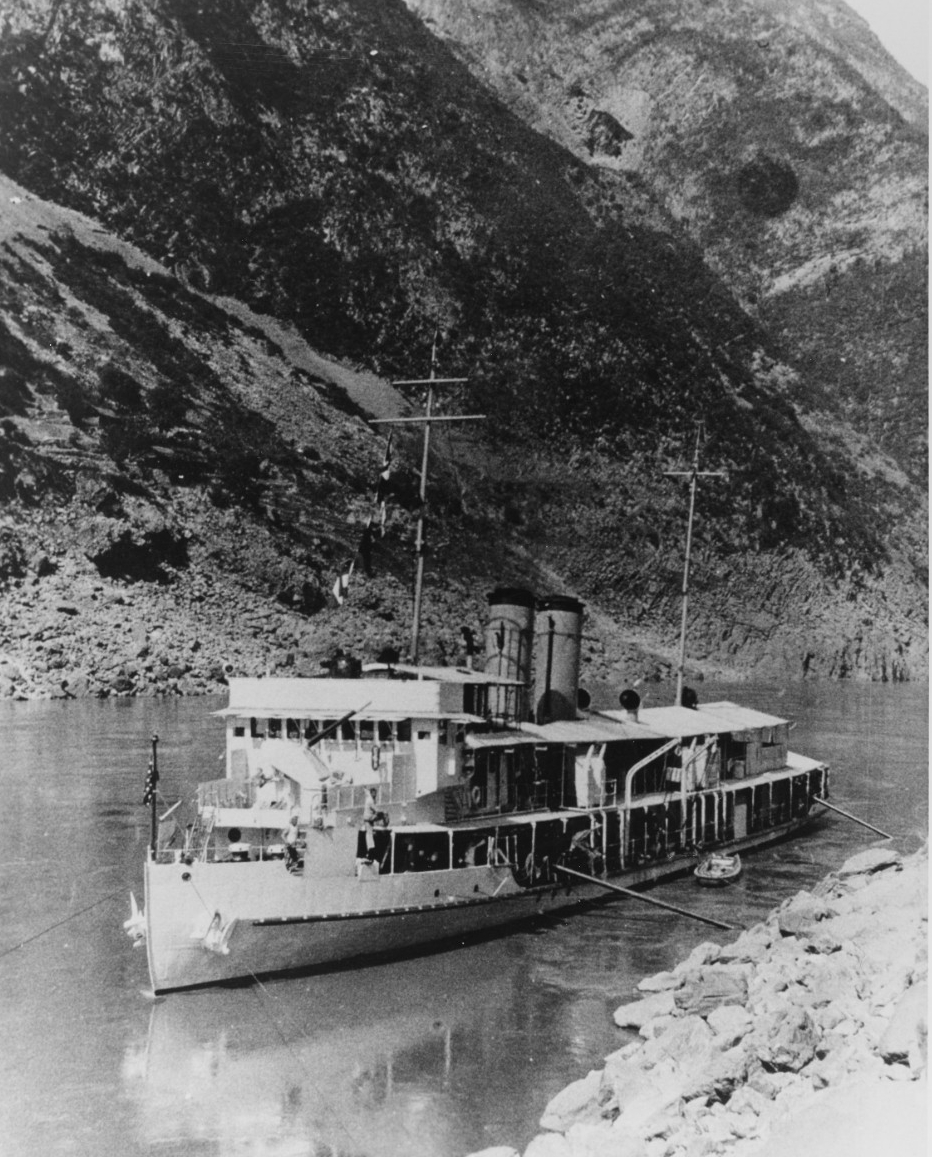 On Aug. 5, 1921, the Yangtze River Patrol Force was officially organized under Rear Adm. William H. G. Bullard as a command under the Asiatic Fleet. Their mission was to protect U.S. interests, lives and property, and to maintain and improve friendly relations with the Chinese people. The Yangtze River, the main artery of China, was navigable for roughly 1,750 miles, floated about 59 percent of China's commerce, and reached more than 50 percent of its population. U.S. naval forces, along with Britain’s Royal Navy, were distributed over the entire length of the river. The force served in China until December 1941, when many of its vessels were captured or scuttled, and the crews taken prisoner by the Japanese. After World War II, the Yangtze patrol resumed operations, but on a more limited basis. After Chinese Communists eventually occupied the Yangtze River valley, the United States permanently ceased operations and disbanded the patrol. 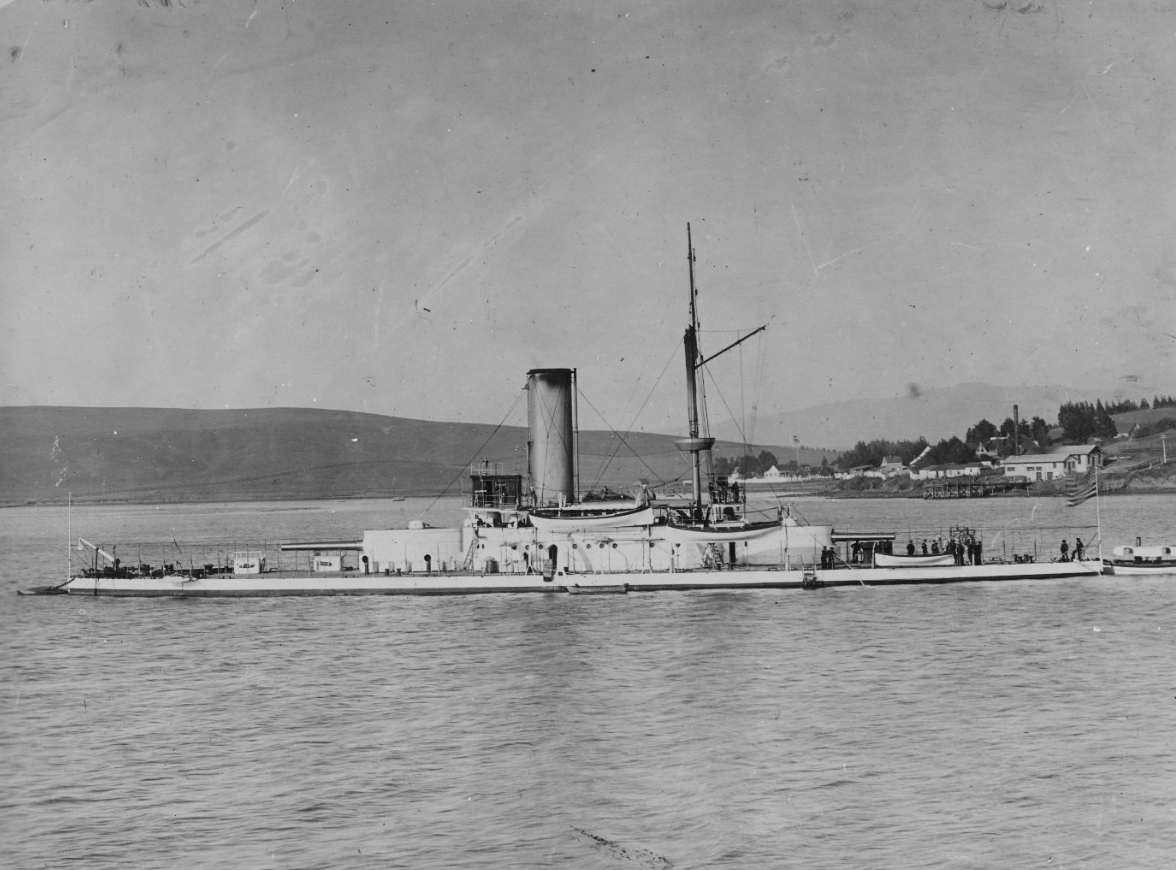 On Aug. 4, 1898, during the Spanish-American War, Monterey became the first U.S. Navy monitor to cross the Pacific, reaching Manila Bay, Philippines, from San Francisco, CA. Monterey was ordered—in company with collier Brutus—to sail for the Philippines to provide the Asiatic Squadron with big-gun support against a possible attack by the Spanish battleship Paleyo. The two ships made the 8,000‑mile voyage without mishap. Monterey remained in the Philippines supporting the occupation of Luzon into the following year. On April 6, 1900, Monterey sailed for China, received new boilers at Hong Kong, and then operated from July 1900 to September 1901 as a station ship at Shanghai. Monterey returned to the China coast about ten years later before she was decommissioned in August 1921. 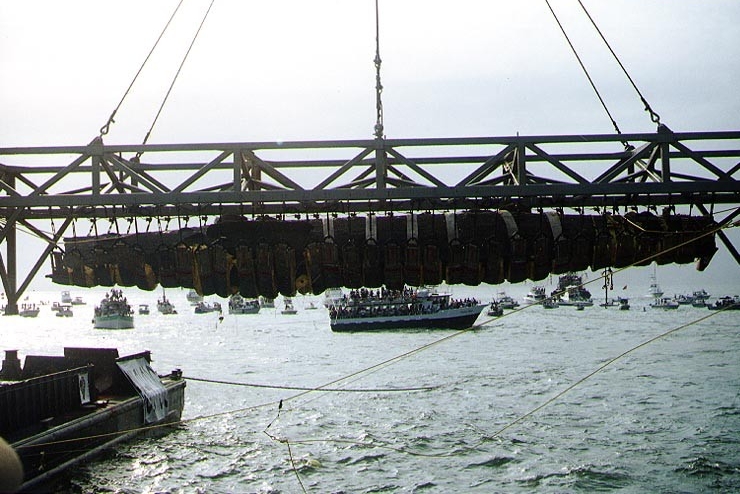 On Aug. 8, 2000, at 8:37 a.m., the Confederate submarine H. L. Hunley broke the surface of the ocean for the first time in more than 136 years near the mouth of the harbor at Charleston, SC. Once safely secured for transporting, H. L. Hunley was shipped to the Warren Lasch Conservation Center, now part of the Clemson University Restoration Institute, for conservation inside a specially designed tank. The Confederate submarine has the distinction of being the first submarine to sink an enemy warship (Housatonic) in wartime. In the summer of 2000, a team of professionals from NHHC, the National Park Service, and the South Carolina Institute of Archaeology and Anthropology made the decision to excavate the site due to concerns that the historic vessel could be disturbed or damaged since its location was known. For more, check out Underwater Archaeology Branch's H. L. Hunley page. 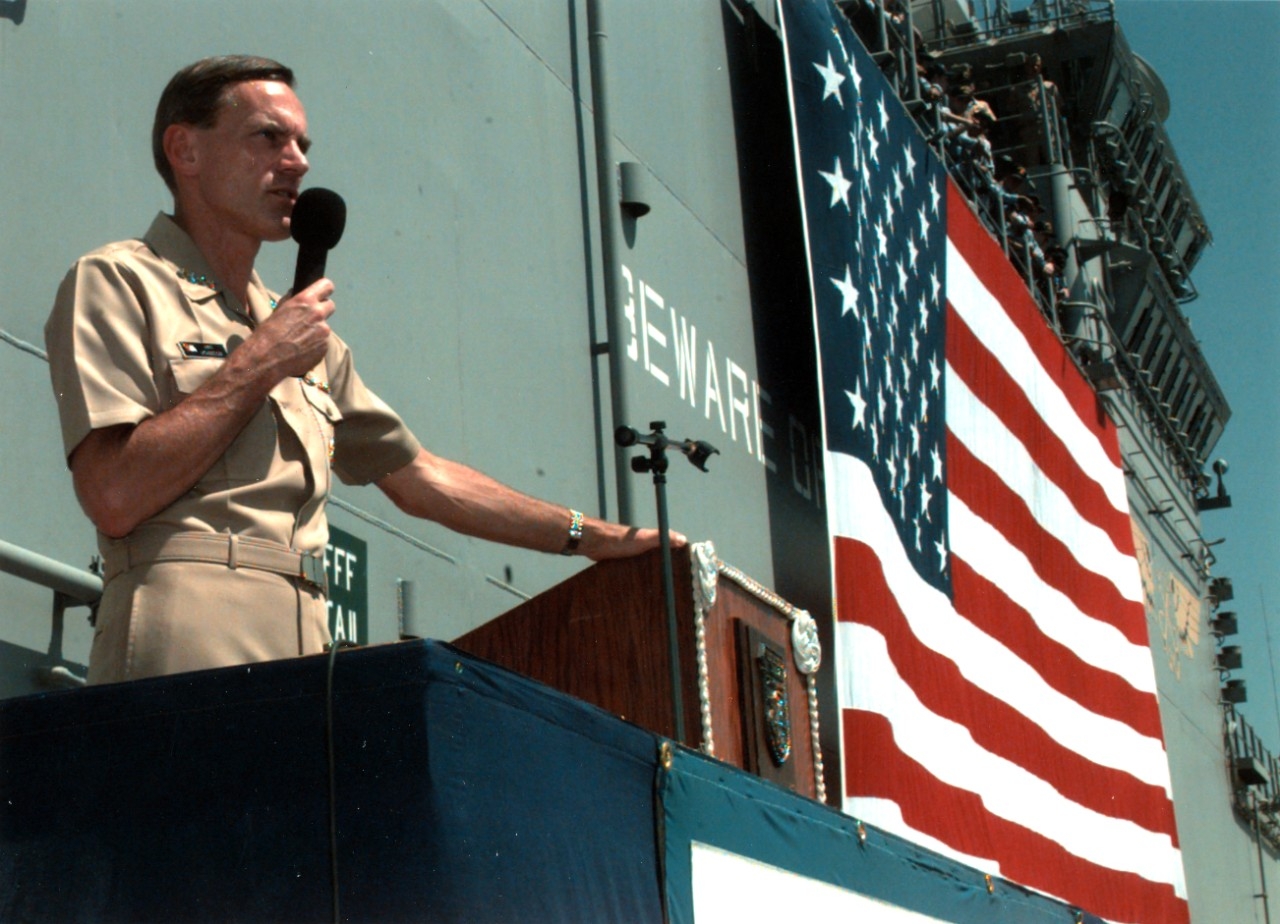 Adm. Jay L. Johnson Sworn in as CNO—25 Years Ago

On Aug. 5, 1996, Secretary of the Navy John H. Dalton swore in Adm. Jay L. Johnson as the 26th Chief of Naval Operations. He served as the Navy’s top officer until he retired on July 21, 2000. During his tenure, he improved the interdeployment training cycle by reducing at-sea time, easing wear and tear on equipment, and ensuring Sailors could spend more time in port with their families. Johnson also led the Joint Chiefs of Staff in calling for improved personnel compensation. He was the first service chief to step forward and support relief efforts for needy Sailors, Soldiers, Airmen, and Marines. He was instrumental in restoring full retirement pay for military retirees and pushed for larger increases in annual military pay raises. In addition, he employed a three-part strategy—shaping, responding, preparing—with a force structured around 12 carrier battle groups and 12 amphibious ready groups. He also helped formulate military policy for Operations Desert Strike, Northern and Southern Watch, and Allied Force. 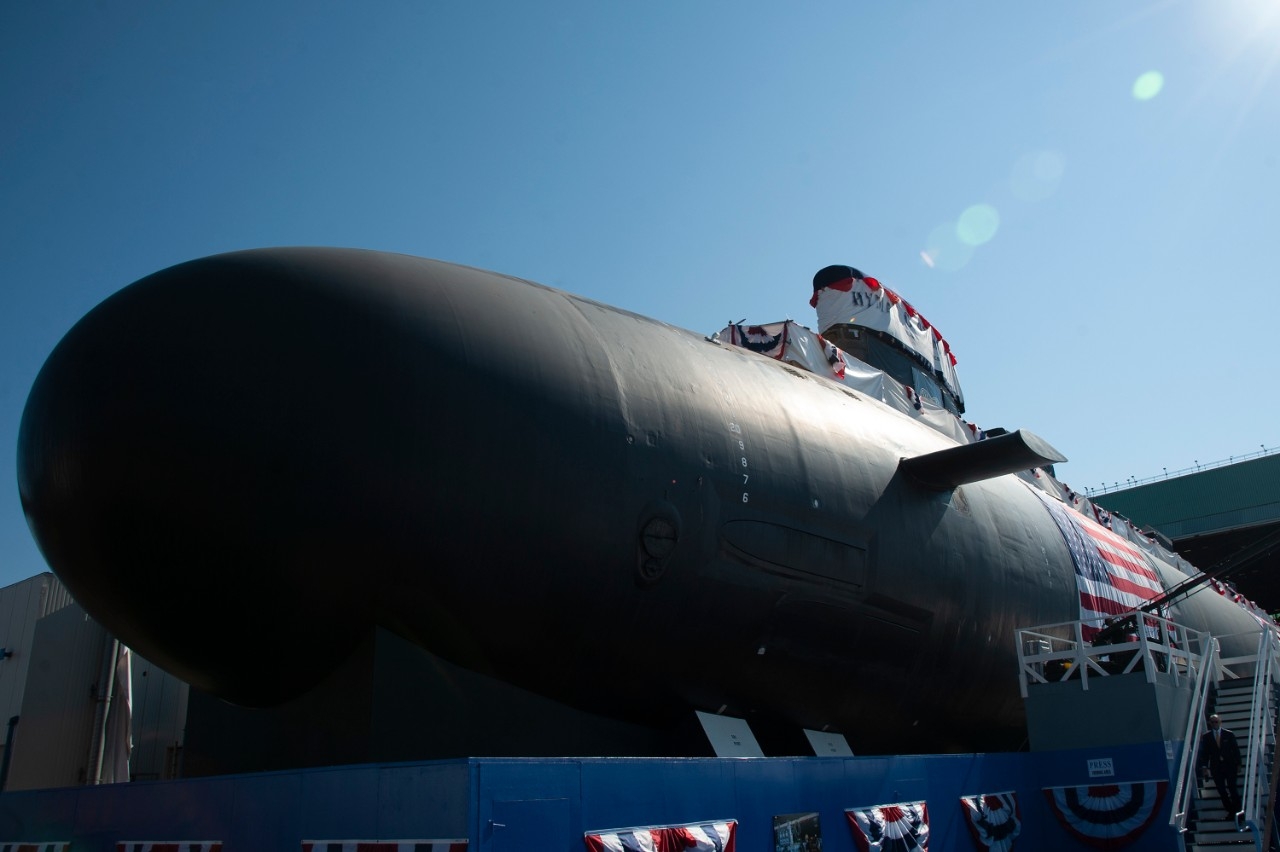 On July 31, the Navy christened its newest Virginia-class attack submarine, USS Hyman G. Rickover, during a ceremony at the General Dynamics’ Electric Boat shipyard facility in Groton, CT. “This submarine is a fitting tribute to Admiral Rickover, who truly transformed our Navy,” said Adm. James Caldwell, director of the Naval Nuclear Propulsion Program. Rickover served for 63 years in the Navy and is credited with spurring the service to adopt nuclear propulsion after World War II. Caldwell lauded Rickover’s legendary work ethic, frankness, attention to detail, and commitment to excellence. This is the second ship to honor him. The first Hyman G. Rickover served from 1984 to 2007, deploying 12 times. The newest Hyman G. Rickover will eventually join the fleet with a displacement of 7,835 tons, crew of 132, and a weapons payload of 12 vertical launch systems and four torpedo tubes. For more, read the U.S. Navy press release. 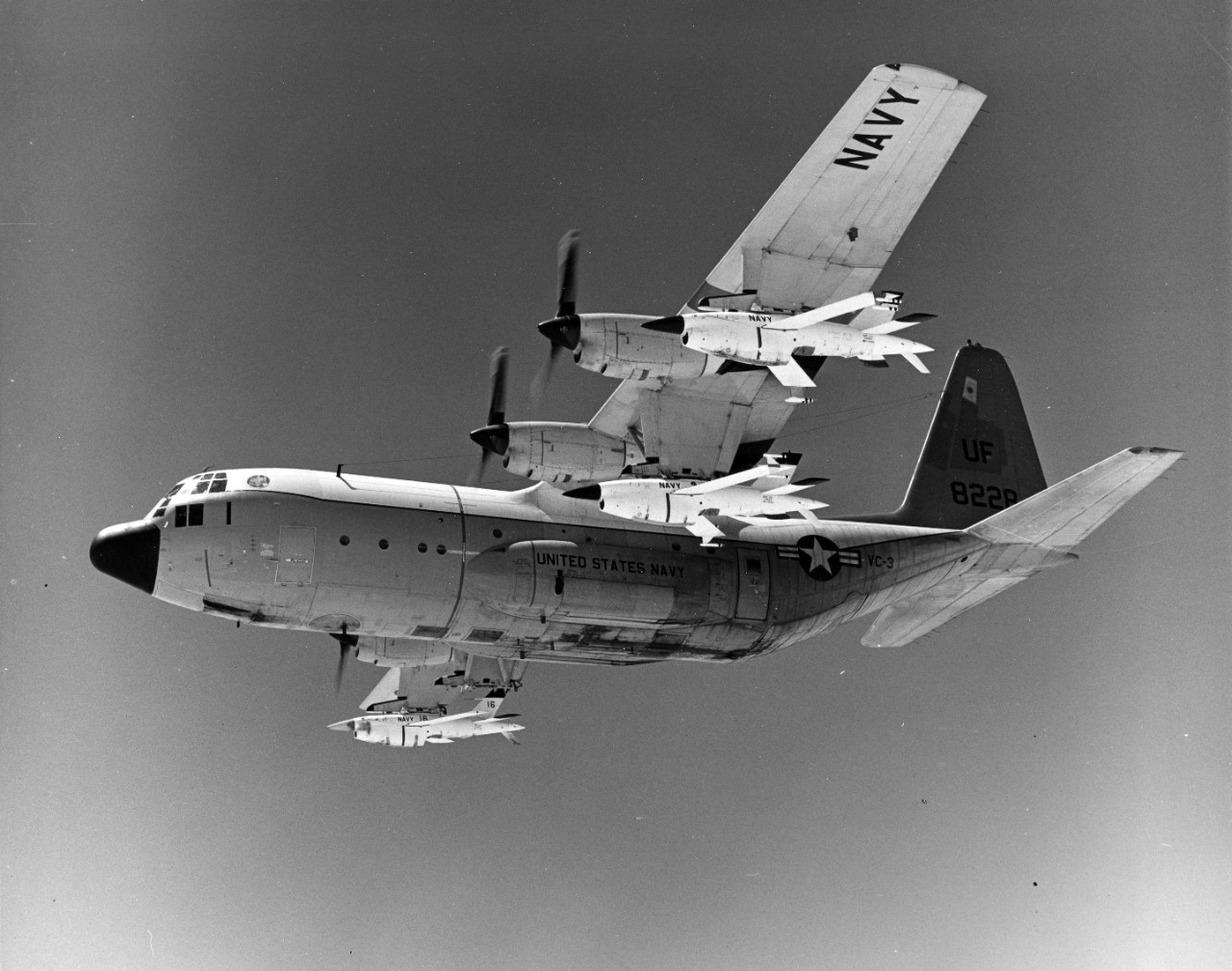 This week’s Webpage of the Week is from NHHC’s Exploration and Innovation pages. The use of flying objects in the United States, or unmanned aerial vehicles (UAVs), dates back to the Civil War, when both Union and Confederate forces would launch balloons laden with explosives on ammunition depots in an attempt to destroy them. In late 1916, the U.S. Navy hired the Sperry Gyroscope Company to develop an aerial torpedo that could fly 1,000 yards upon launch with the capability of detonating its warhead on an enemy warship. Two years later, on March 6, 1918, after a series of failures, the company succeeded in launching an aerial torpedo that hit the desired target 1,000 yards away. With that successful flight, the world’s first unmanned aircraft system, the Curtis N-9, was born. For more, check out the Navy’s Use of Unmanned Aerial Vehicles page. It contains a short history, suggested reading, articles, blogs, and selected imagery. 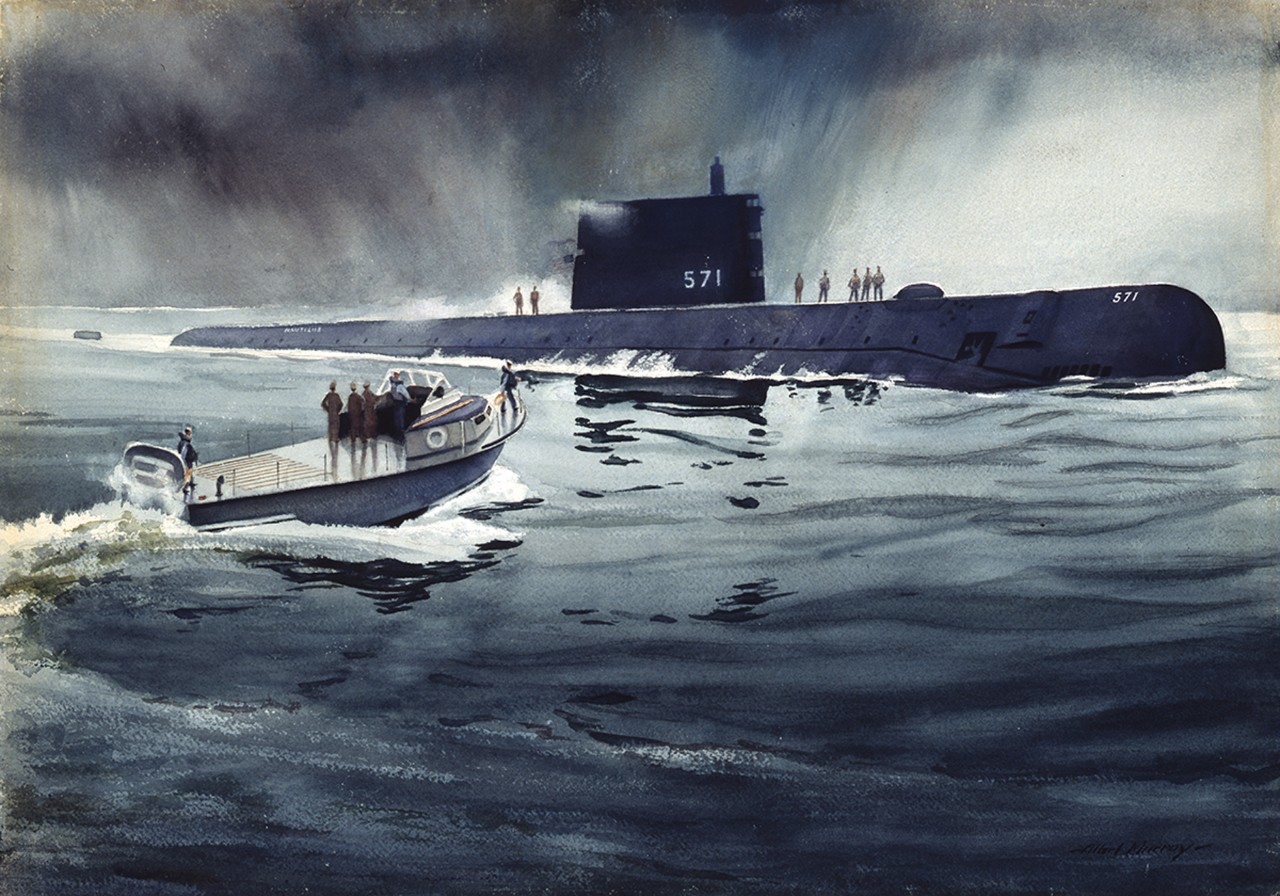 On Aug. 3, 1958, USS Nautilus became the first submarine to cross the “top of the world,” when the boat passed under the Arctic polar ice pack at the North Pole during Operation Sunshine. After the historic feat, she then surfaced off Greenland four days later. The commanding officer, Cmdr. William R. Anderson, and the crew were subsequently personally congratulated by President Dwight D. Eisenhower and awarded the Presidential Unit Citation. Nautilus, the world’s first nuclear-powered submarine and the pride of the U.S. Navy’s submarine force, is now a unique museum ship at the Submarine Force Museum in Groton, CT. She was designated a National Historic Landmark by the Secretary of the Interior on May 20, 1982.