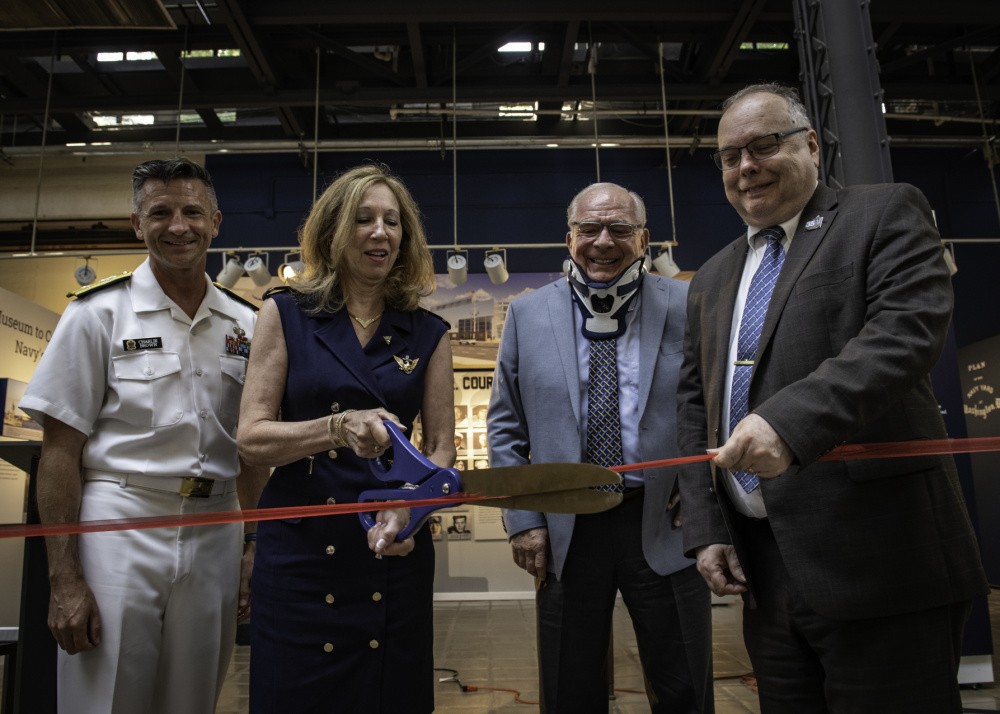 Initially commissioned in 2020, the new NMUSN campus is tentatively planned to open in 2025 with a proposed location in the vicinity of the Washington Navy Yard, allowing access to the general public.

“The new National Museum of the U.S. Navy will be a state-of-the-art facility devoted to telling the storied history of the Navy’s past, present and future,” said Navy Museum Development Foundation Board of Directors President Albert H. Konetzni Jr., a retired U.S. Navy vice admiral. “The centerpiece of a new, more accessible Navy campus, the museum will become a tangible tribute to the traditions of service and sacrifice exemplified by Navy Sailors for more than 200 years.” 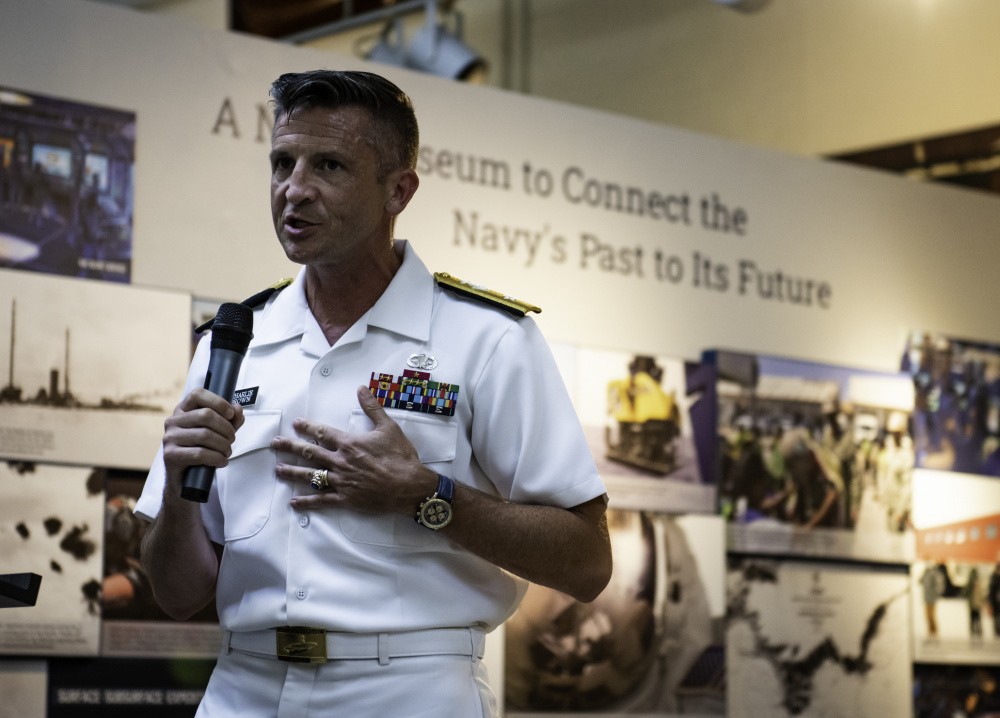 The current NMUSN building was once a naval gun factory. The building was obtained by Adm. Arleigh Burke in 1961 to hold a more complete collection of artifacts at the time. However, the building was not designed for the long-term preservation, maintenance and displaying of sensitive historical artifacts and documents. Over the last several years, many artifacts have been taken off display in the current museum to ensure their preservation.

“This new exhibit gives us a glimpse into the future of our Navy’s history,” said Rear Adm. Charlie Brown, U.S. Navy Chief of Information. “These concepts are not just about a museum building, they are about a campus which will serve as a cultural center for future generations of Sailors.”

“Future Campus Vision”, which features artifacts from the original museum, expands its focus beyond the new site development. The first section of the exhibit displays the many roles of the U.S. Navy in the history of the nation. Visitors will see a preview of the new museum campus, which will show how the Navy has confronted past challenges and fulfilled new obligations to evolve into today’s modern fighting force. These examples will illustrate the Navy’s importance to broader political, social and cultural historical developments in the U.S.

“Our current naval forces are over 300,000 strong,” said NHHC Director Samuel J. Cox, a retired U.S. Navy rear admiral. “Our greatest partner, the U.S. public, wants to see their Navy in action and understand what they’ve been doing throughout history. This new museum will help us educate the public about our rich naval history and the legacy of valor and sacrifice of our Sailors, past and present.”

The second wall of the exhibit is dedicated to naval Sailors' and leaders' individual journeys. This section shows examples of the naval diversity and stories of the Sailors who make up the Navy’s history. 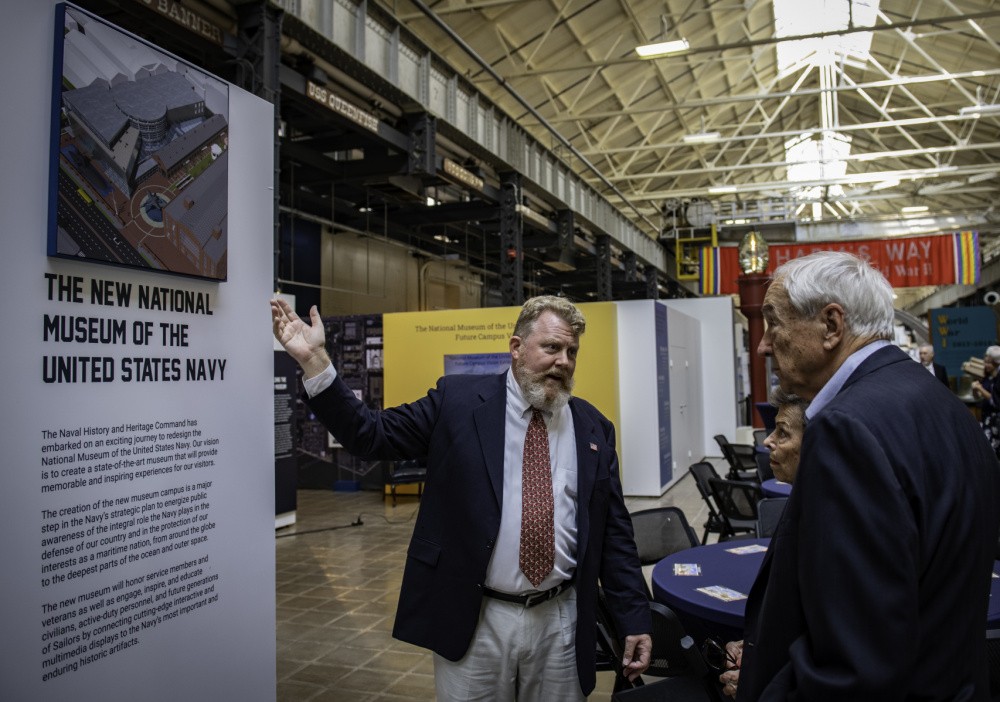 The third section of “Future Campus Vision” highlights the special relationship between the Navy’s flagship museum and the Washington Navy Yard. The fourth and final section consists of a TV monitor designed to carry a video montage of the new NMUSN campus. The video will be routinely updated, so visitors can easily follow along with the development progress.

“This is an opportunity to showcase the experience of Navy service members and create a lasting memorial to the Navy’s central role in our national story,” said Konetzni.

While the current NMUSN welcomes 100,000 visitors per year, NHHC officials estimate that the new NMUSN campus will draw more than 1.5 million visitors annually. Tentative plans to open the museum are scheduled for the Navy’s 250th birthday, October 13, 2025.

NHHC, located at the Washington Navy Yard, is responsible for the preservation, analysis, and dissemination of U.S. naval history and heritage. It provides the knowledge foundation for the Navy by maintaining historically relevant resources and products that reflect the Navy's unique and enduring contributions through our nation's history and supports the fleet by assisting with and delivering professional research, analysis, and interpretive services. NHHC is composed of many activities, including the Navy Department Library, the Navy Operational Archives, the Navy art and artifact collections, underwater archeology, Navy histories, 10 museums, USS Constitution repair facility, and the historic ship Nautilus.