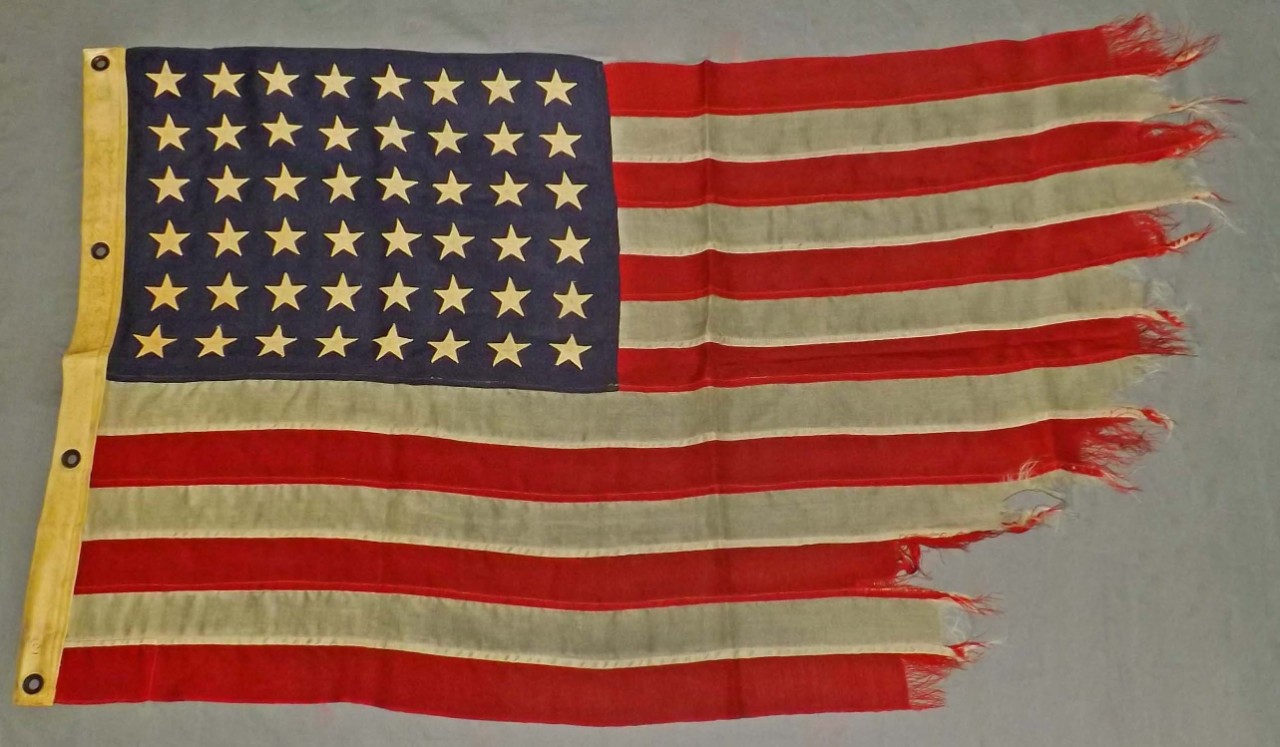 One 48-star National Ensign from the USS John D. Ford (DD-228). The rectangular cloth flag has a dark blue canton with 48 white stars. The fly consists of seven red and six white horizontal alternating stripes. There are four brass grommets on the white canvas hoist. The obverse side of the hoist has the number 10 written on each corner. The reverse side of the hoist has the number 10 written in each corner and black stenciled lettering that reads “U.S. ENSIGN No. 11 / CAVITE, P.I. JAN. 1940." A rectangular piece of white cloth is pinned to the hoist with black handwritten lettering that reads "Flag Flew by U.S.S. John D. Ford / in battles of World War II / against Japan / Makassar Straits / 1-24-42 / Badung Straits / 2-19-42 / Java Sea / 2-27-42 / Bali Straits / 3-1-42." The flag is tattered along the fly and stained by stack gases.

For extraordinary heroism in action against enemy Japanese forces during the Java Campaign in the Southwest Pacific War Area, from January 23 to March 4, 1942. Gallantly operating in defense of the Netherlands East Indies with the limited surface forces of the combined United States, British and Dutch Royal Navies, the JOHN D. FORD led a column of four destroyers in a fierce night counter-invasion action off Balikpapan, confusing and disorganizing the enemy to aid in the sinking or damaging by torpedo and gunfire of a number of Japanese warships. A highly vulnerable target for hostile cruiser and destroyer gunfire while fighting as a unit of a joint United States-Dutch Striking Force in the Badoeng Strait action, she responded nobly to the heroic efforts of her officers and men and scored several damaging torpedo and gun hits before effecting a masterly withdrawal from the field of combat. Boldly attacking a numerically superior force by day in the Java Sea action, she was one of six vessels in the combined United States-Dutch-British Combined Striking Force to wage a brilliant torpedo attack against the main body of the Japanese Armada and, hurling the full fighting power of her gun batteries at the hostile disposition, exerted every means at her command to inflict damage on the Japanese and aid her companion ships in forcing the enemy to break off the engagement. Relentlessly trailed by cruiser-borne planes and repeatedly bombed by enemy aircraft, she battled with unconquerable spirit and undiminished fury against strong dispositions vastly superior in numbers and armament during this early critical period of the war. The JOHN D. FORD’S illustrious achievements add new luster to the annals of American Naval Warfare and uphold the highest traditions of the United States Naval Service.

John D. Ford spent the rest of the war as a convoy escort in both the Atlantic and Pacific oceans.