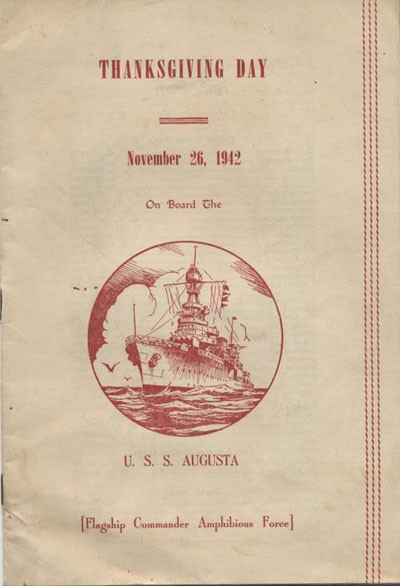 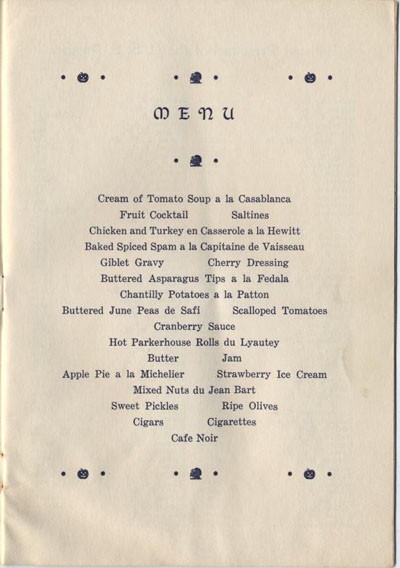 Description: Menu: Cream of Tomato Soup a la Casablanca, Fruit Cocktail, Saltines, Chicken and Turkey en Casserole a la Hewitt, Baked Spiced Spam a la Capitaine de Vaisseau, Giblet Gravy, Cherry Dressing, Buttered Asparagus Tips a la Fedala, Chantilly Potatoes a la Patton, Buttered June Peas de Safi, Scalloped Tomatoes, Cranberry Sauce, Hot Parkerhouse Rolls du Lyautey, Butter, Jam, Apple Pie a la Michelier, Strawberry Ice Cream, Mixed Nuts du Jean Bart, Sweet Pickles, Ripe Olives, Cigars, Cigarettes, Cafe Noir. Message: [opposite menu page] It is fitting that this Thanksgiving Day should come at the conclusion of a series of hard fought naval engagements and a victorious return to port. To every officer and man on the Augusta this holiday means more than "good chow" and a day off. In its five engagements, one against a shore battery and four against enemy naval forces, the ship rendered a good account of itself and contributed in a large degree to the final defeat of the opposing forces and the establishing of a second front in North Africa. In the course of each engagement the ship was subjected to accurate and heavy fire by the opposing forces. And yet, although bracketed many times by the projectiles of the enemy, the ship miraculously ascaped without damage in herself or injury to the crew. It should be apparent to all that consistent escape from harm was due not alone to skill, or to good luck, but unquestionably to the intervention of divine providence. Therefore it is with especial gratitude this Thanksgiving Day that the officers and crew of the Augusta join in this traditional celebration.