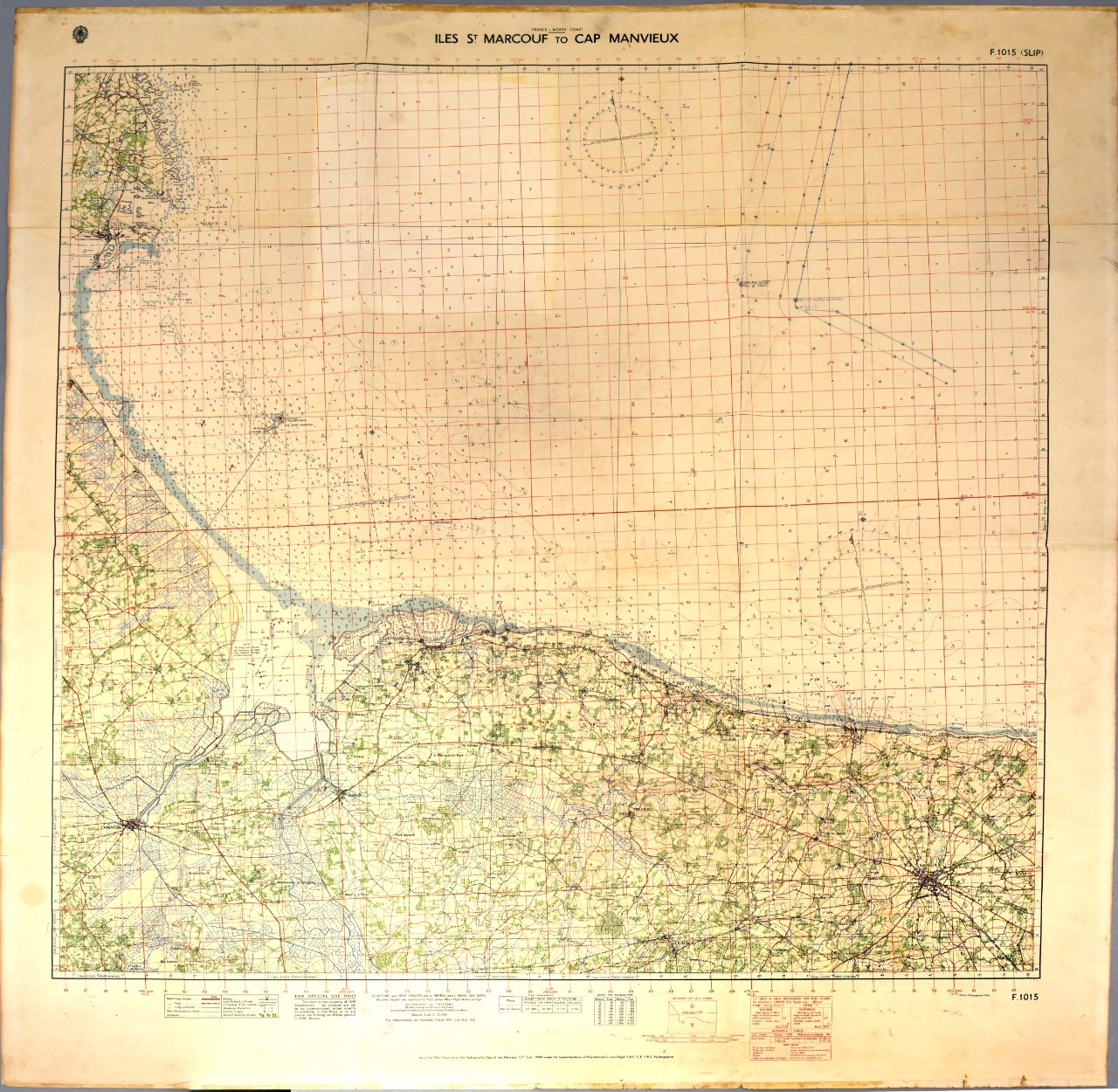 One topographical map of the invasion area of the coast of Normandy, France used by USS Texas (BB-35) during her bombardment operations in support of the landings, 6 June 1944. There are handwritten notes indicating German gun emplacements on the coast and calculations for firing positions offshore. Titled Iles St Marcouf to Cap Manvieux.

This British Admiralty chart is one of many prepared early in 1944 for the invasion of France. It was issued to and used by the gunnery officer of the USS Texas in preparation for Operation Neptune, the amphibious phase of Operation Overlord. The chart was annotated and prepared for use in carrying out the gunfire support missions of the Texas, a unit of the Heavy Bombardment Group assigned to Force 0 for the assault on the north coast of France, June 1944. This chart remained in the fire control tower of the Texas and was in constant use by the gunnery officer for the duration of the ship’s operation in the Omaha Beach area.

The parallel lines marked with dan buoys (small circles) mark the channels that were swept of mines immediately prior to and on D-Day, 6 June. In the westerly swept channel, the positions marked 0130 and 0210 show Texas’ positions during the pre-dawn approach to the landing area. The small penciled circles with anchors indicate where the Texas anchored to provide fire support, observe, or await new assignments. A penciled figure next to the mark tells the date in June.

The shore bombardment annex to the operation plan designated targets that were scheduled to be taken under fire and additional likely targets. These are marked on the chart by a T followed by a number, such as T1 in grid position 586939. T1 was reported to be a well-protected German battery slightly back of the steep cliffs of Pointe du Hoc, commanding the approaches, the fire support and transport areas, and the boat lanes. T1 was the first and primary D-day target for the main battery of the Texas and the one on which she opened fire at 0600.

Successive positions of the allied line of advance are shown by wavy penciled lines whose ends are marked by small circles and pennants. It begins at grid position 4387, approximately southwest of the town of Brevands, France, and terminates off the map at grid 52. These lines were drawn to help determine whether designated targets were ahead or behind the line of advance. 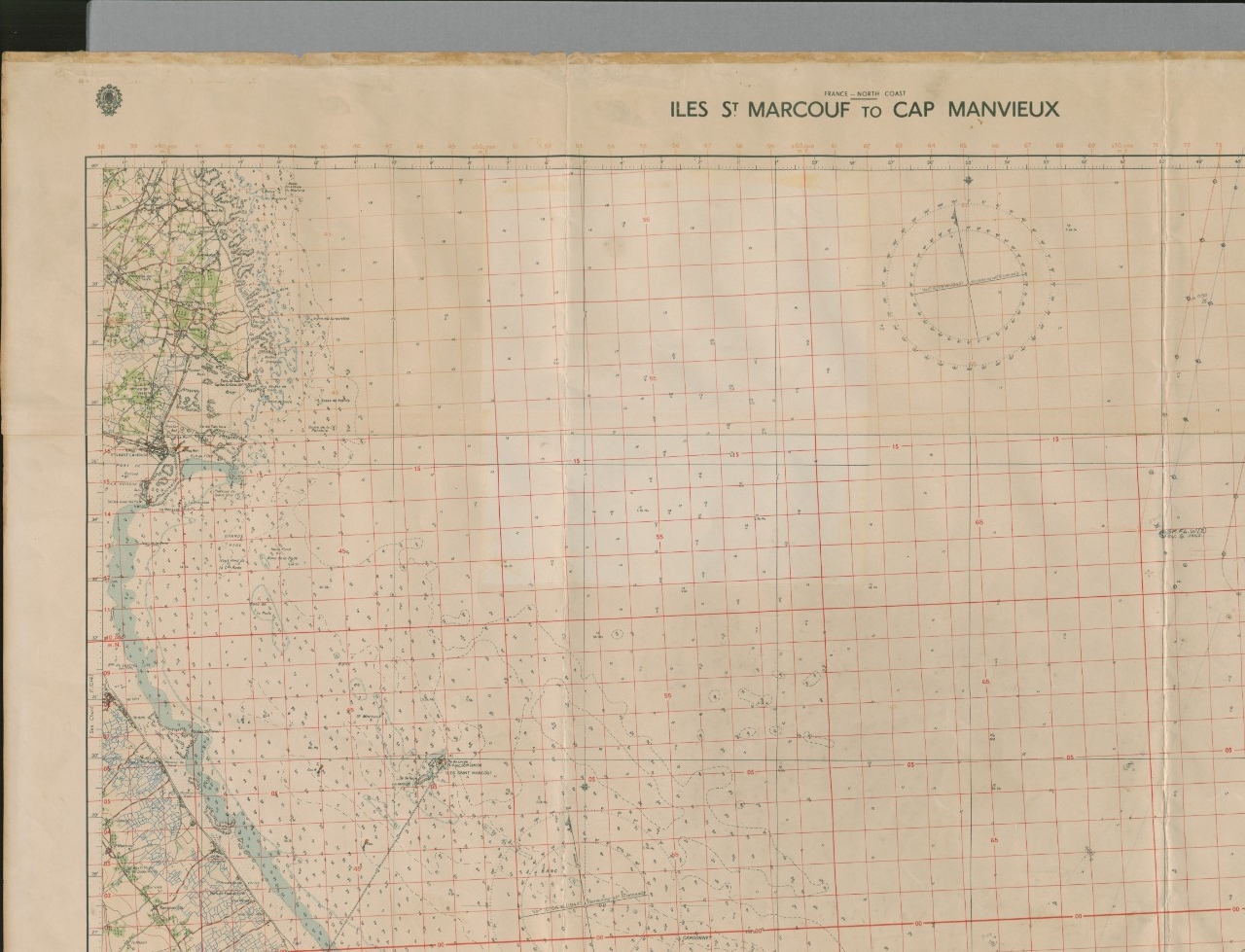 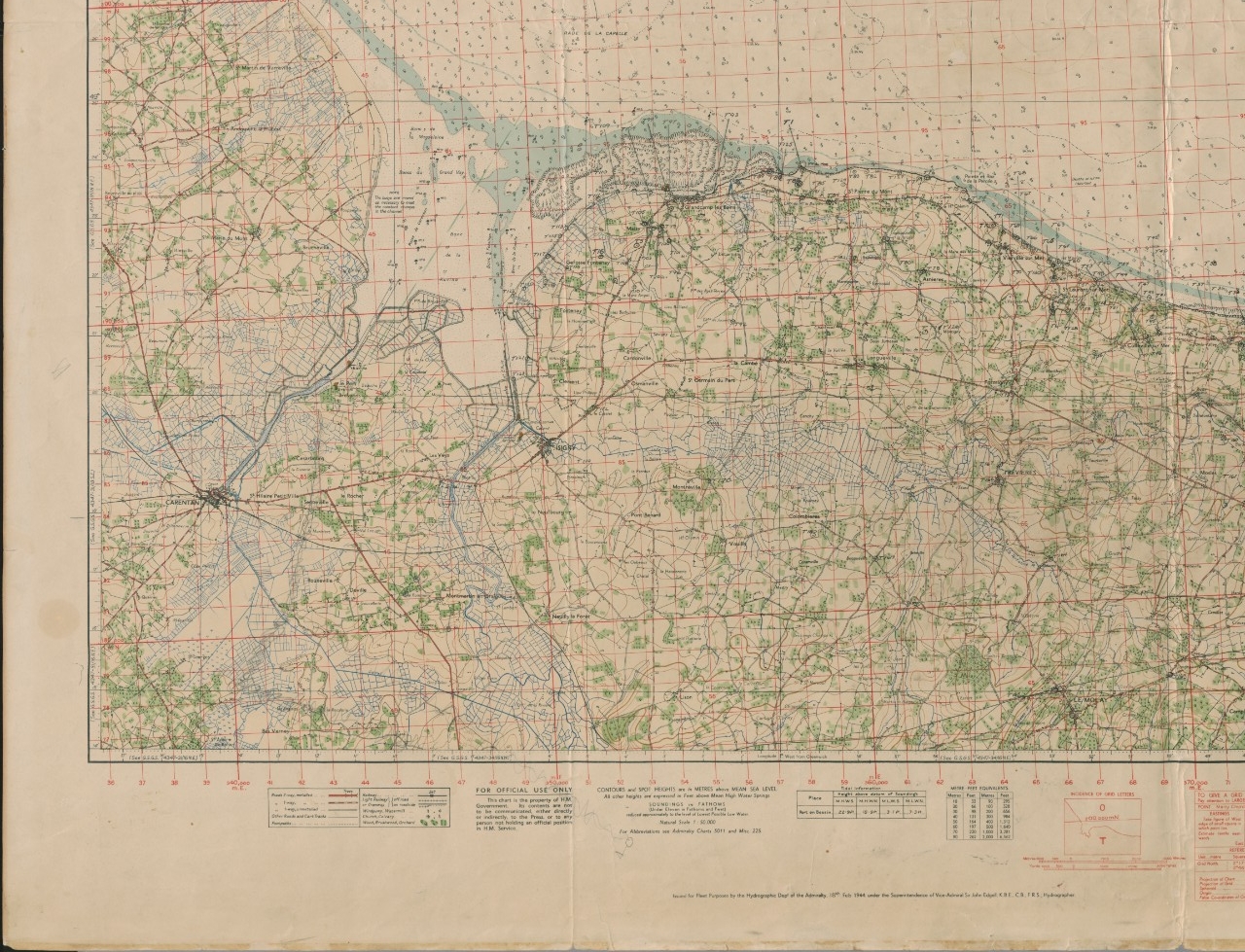 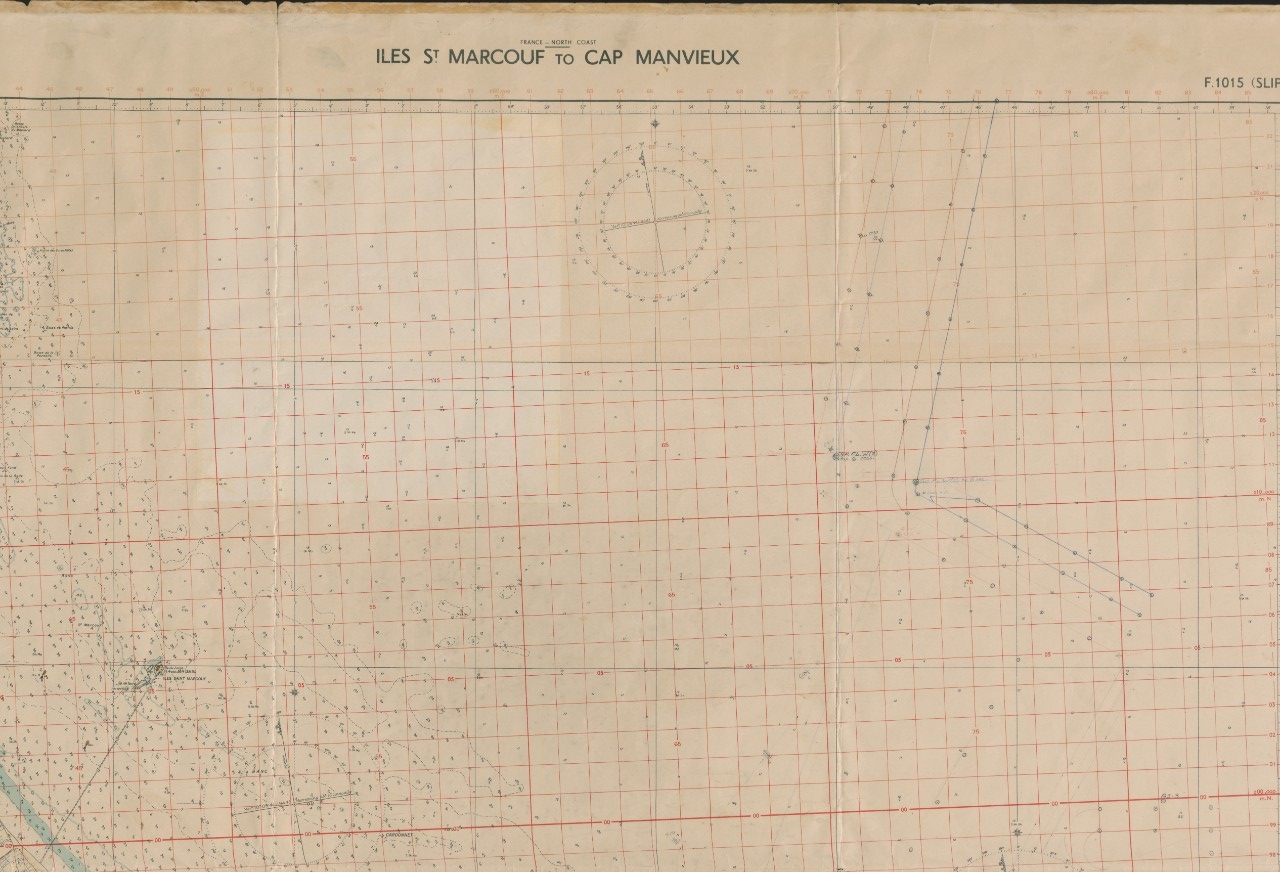 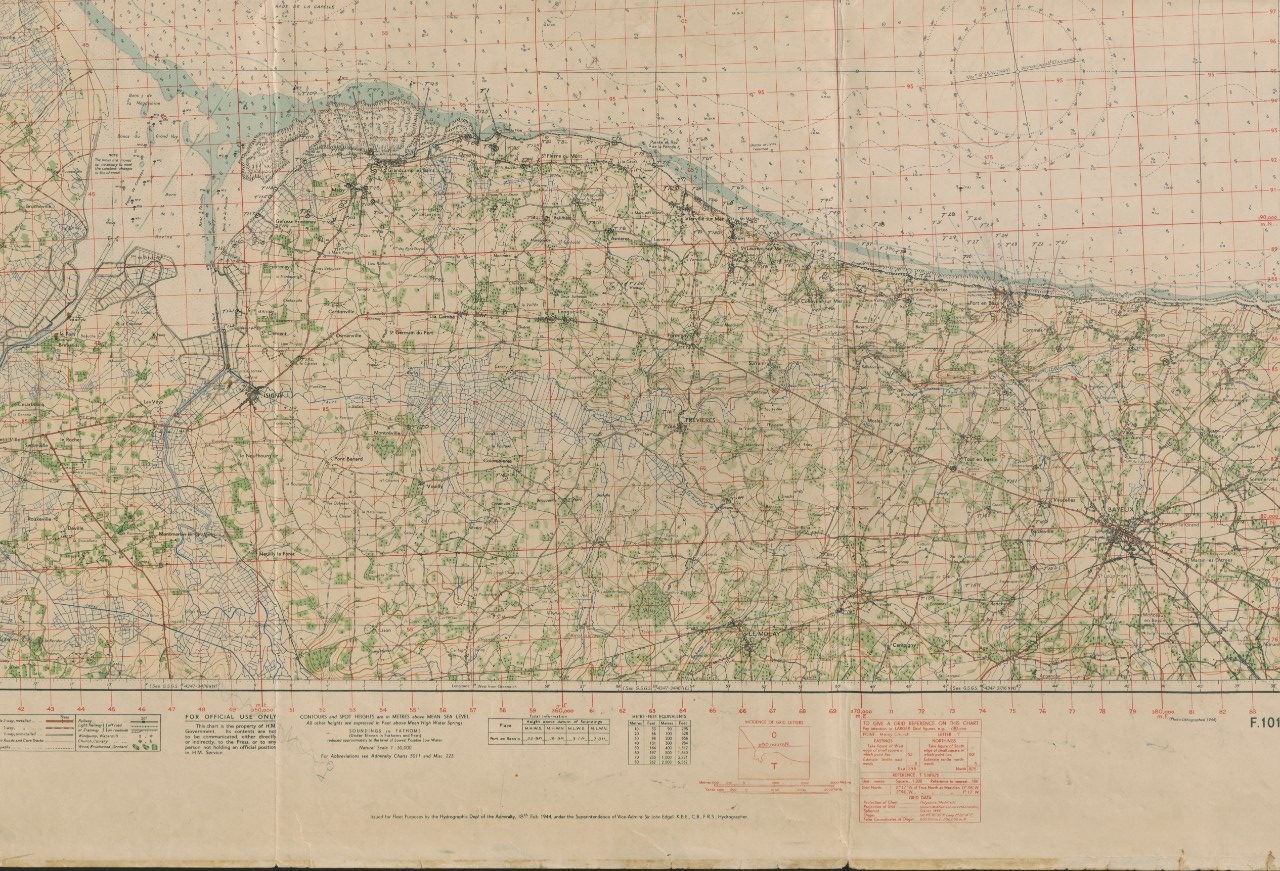 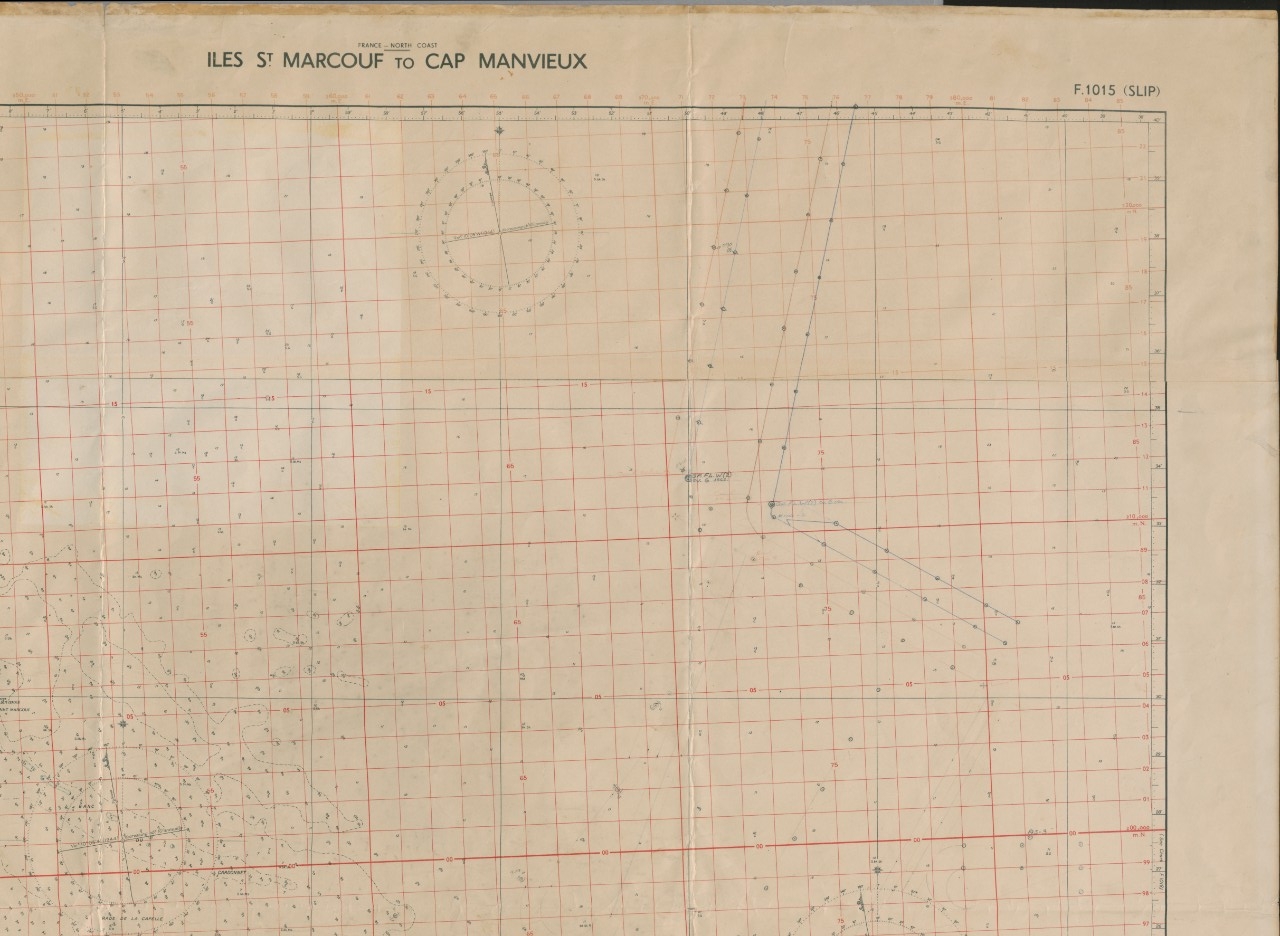 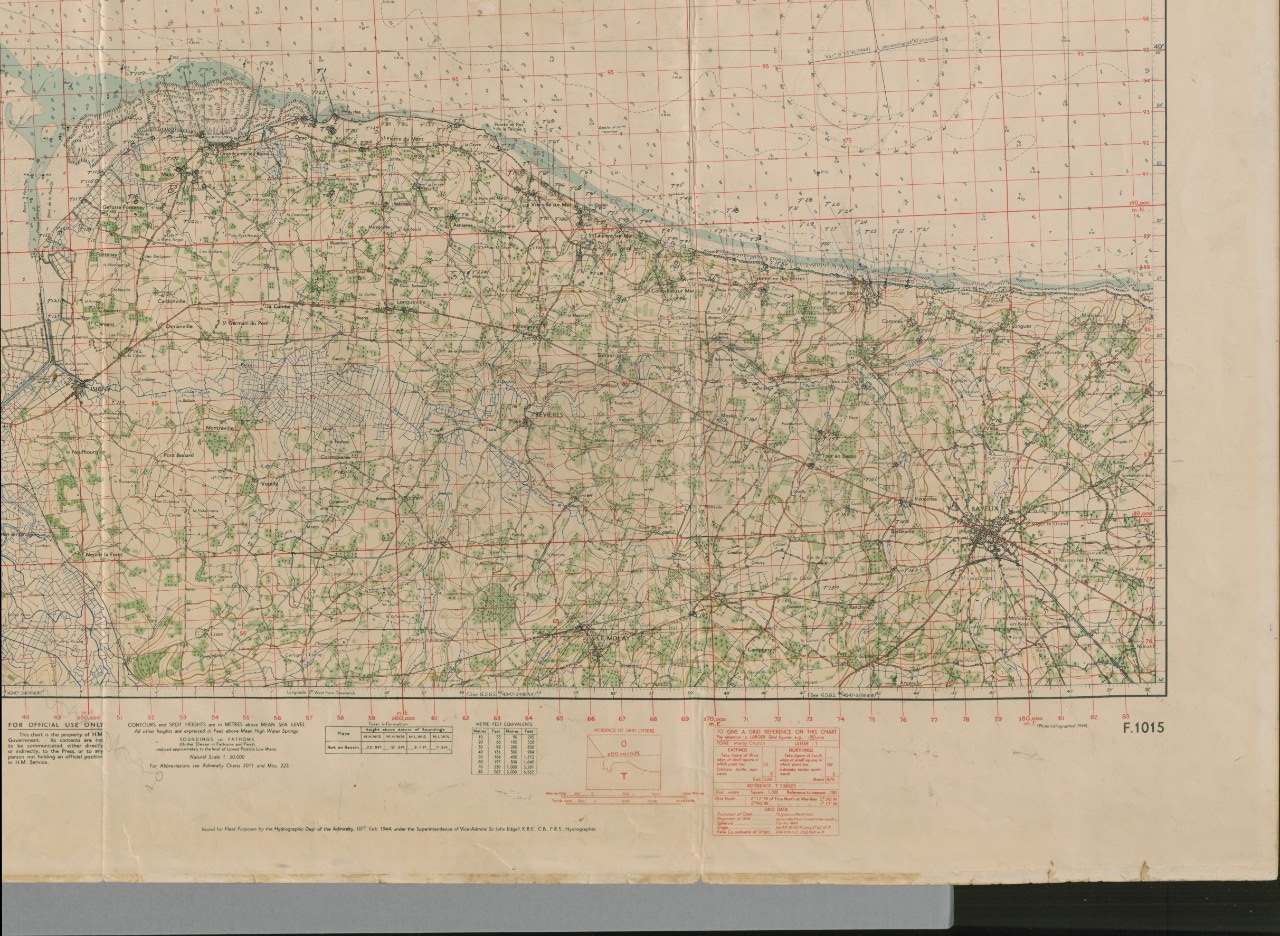