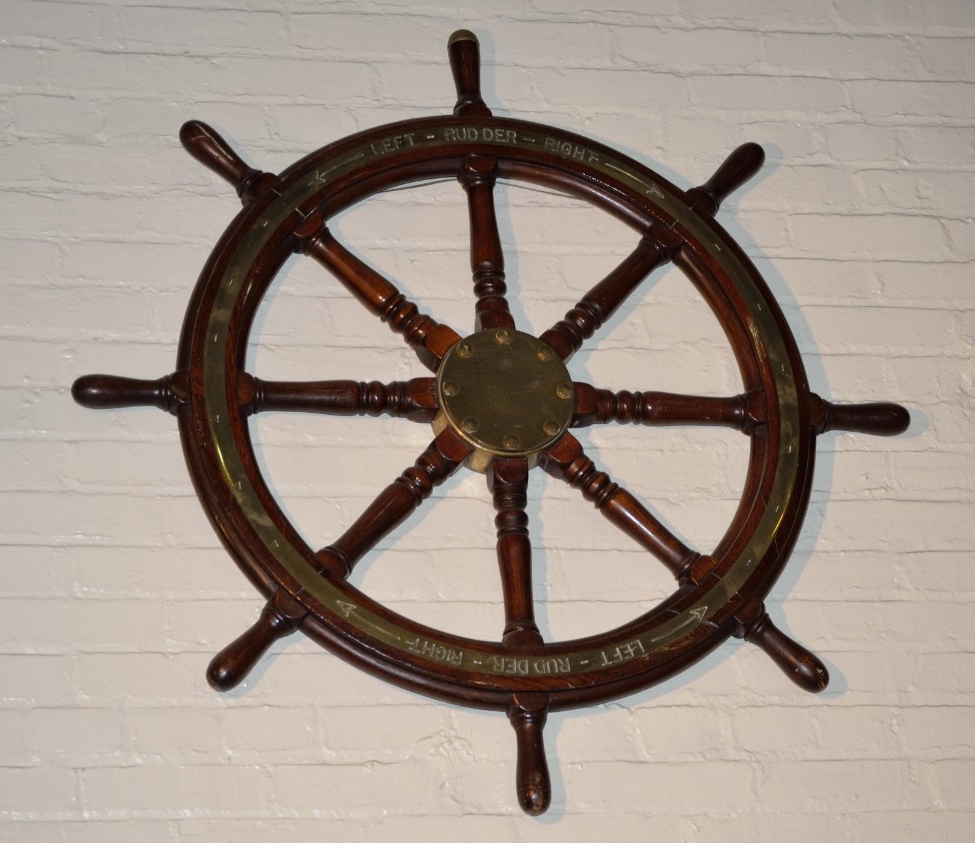 One wooden helm steering wheel with eight spokes from the USS Pensacola (1859). A metal inlay along the top and bottom of the rim of the wheel reads: "(arrow) LEFT -  RUDDER - RIGHT (arrow)". A metal plaque attached to the middle of the wheel is engraved: "THIS STEERING WHEEL WAS / ORIGINALLY INSTALLED ON THE / STEAM SLOOP OF WAR PENSACOLA / LAUNCHED AT PENSACOLA NAVY YARD / 15 AUG 1859 AND STRICKEN FROM THE / NAVY LIST 23 DEC. 1911.  THIS WHEEL WAS IN / USE ON THE PENSACOLA WHEN THAT / VESSEL WAS WITH FARRAGUT'S / SQUADRON IN THE PASSAGE OF FORTS / JACKSON AND ST. PHILIP, APRIL 1862, / AND IN THE BATTLES OF / NEW ORLEANS / AND / MOBILE BAY."

Commissioned in 1859, the screw steamer USS Pensacola was the first US Navy ship to be named after the city of Pensacola, FL. As the engraving on the wheel states, the Pensacola was part of Admiral Farragut’s West Gulf Blockading Squadron that defeated Confederate forces at the Battle of Forts Jackson and St. Philip, breaking the Confederate hold on the mouth of the Mississippi River and opening the river to the Union Navy. The city of New Orleans fell into Union hands following this battle.

Following the war, Pensacola joined the Pacific Squadron, served as a training ship for naval apprentices, and served as a receiving ship before being decommissioned in 1911. The US Navy burned and sank her in San Francisco Bay in 1912.