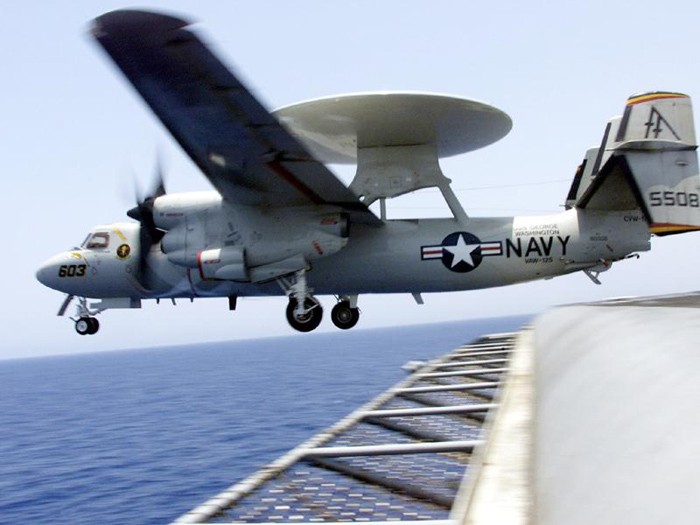 The E-2A Hawkeye was designed with one primary mission in mind: patrolling the approaches to the fleet to detect impending attack by hostile aircraft, missiles or sea forces. In addition to this AEW function, the E-2A provided strike and traffic control, area surveillance, search and rescue guidance, navigational assistance and communications relay services.

Capable of all-weather carrier operations, the Hawkeye has great flexibility in assignments owing to its sophisticated electronics equipment. Its Airborne Tactical Data System (ATDS), consisting of an auto-detection radar, airborne computers, and a memory and data link system, is tied to the Naval Tactical Data System (NTDS), located at fleet headquarters, which gives an overall picture of the tactical situation.

One interesting feature of the E-2 is its 24-foot revolving radar dish. The dish rotates at six rpm and can be retracted two feet to facilitate stowage aboard a carrier. The lift produced by the radar dish when the plane is in flight is sufficient to offset its own weight.

The first Hawkeyes went to sea aboard USS Kitty Hawk (CVA 63) with VAW-11 in 1966. Since that time, they have become a regular part of the fleet's defensive and offensive forces.

The five-man crew consists of two pilots and three equipment operators. They can monitor a large number of aircraft at any given time, directing strike aircraft to assigned targets, in fair weather or foul, while maintaining a watch for hostile forces within the long range of their radar. Working as a team, the Hawkeyes surround the fleet with an early warning ring capable of directing air defenses against any enemy.

The E-2 Hawkeye has been improved since the first E-2A flew in 1961. Follow-on models include the E-2B and E-2C with advanced radar, improved computer systems, and expanded surveillance and command control capability.

The current model operating in the Fleet, the E-2C, is equipped with radar capable of detecting targets anywhere within a three-million-cubic-mile surveillance envelope while simultaneously monitoring maritime traffic. Each E-2C also can maintain all-weather patrols, track, automatically and simultaneously, more than 600 targets, and control more than 40 airborne intercepts.

During the late 1980s and early 1990s the E-2C Hawkeye has supported numerous naval engagements, including the 1985 intercept of the aircraft containing the hijackers of the liner Achille Lauro; the strikes against Libya in 1986; and the Persian Gulf War.

Through carefully planned upgrades, the sensors, communications and avionics systems have kept pace with increasing tactical requirements. The latest update, Group II, coupled with a new mission computer presently under development, will take the Hawkeye well into the next century.