The First American Unit Overseas in World War I 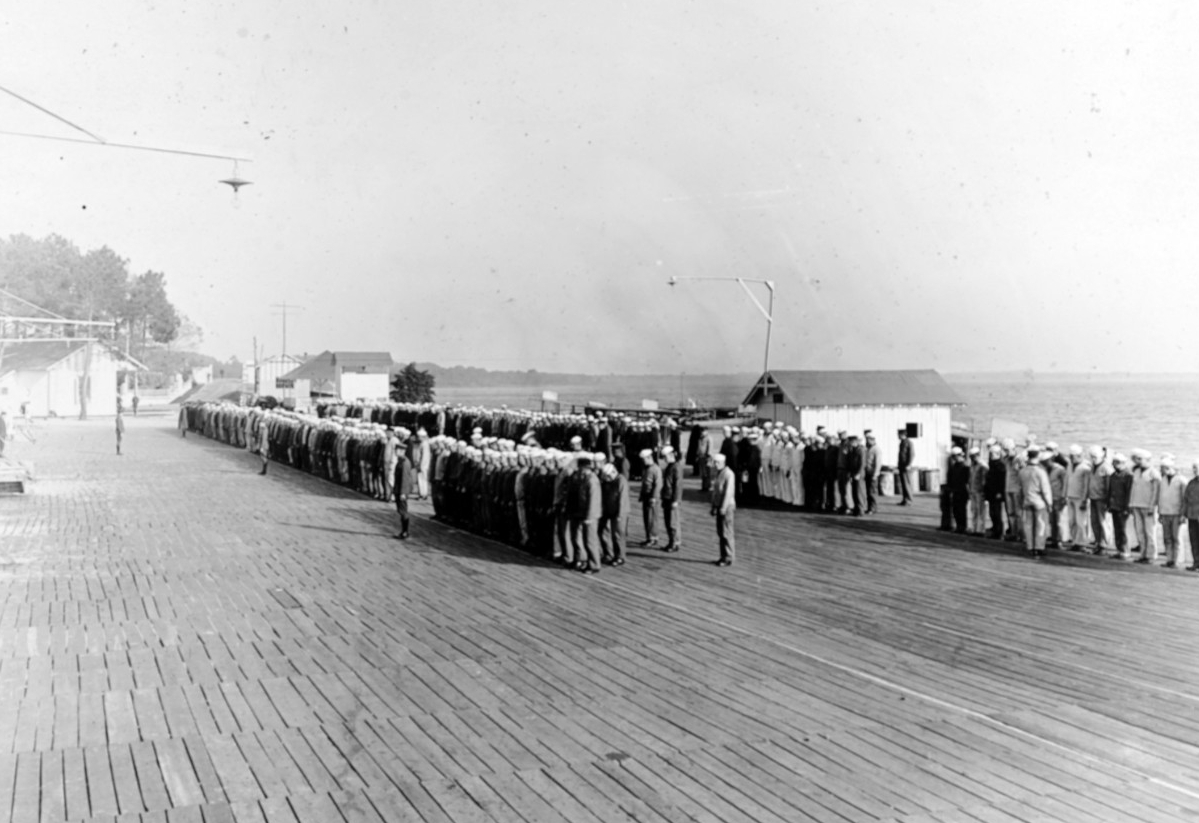 The United States entered World War I on 6 April 1917. Shortly thereafter, the French Ministry of Marine notified the U.S. Navy that it needed American naval aviators to take part in combatting the German U-boat threat. This request led to the formation and dispatch of Aeronautic Detachment No. 1, which was the first U.S. military or naval unit to arrive in France in World War I.1  It consisted of 7 officers and 122 men.2

The detachment was organized under Lieutenant Kenneth Whiting, former commander of the Navy aviation school at Pensacola, Florida. Born in 1881, Whiting had attended the United States Naval Academy and served in the Atlantic Fleet and Pacific Squadron before volunteering for submarine service. Between 1908 and 1914, he commanded four submarines, two still in pre-commission status. In June 1914, he was accepted for flight training and, following successful completion, was designated Naval Aviator 16. Subsequently, Whiting received orders to take command of the Pensacola air station. The entry of the U.S. into World War I found Whiting in command of the seaplane detachment on the armored cruiser Seattle; in short order he received orders to return to Pensacola and prepare the new unit for Europe.3 Whiting left without orders other than to proceed to Paris.4

The U.S. Navy Aeronautic Detachment No.1 left in two contingents. On 12 May 1917, one group of men from Pensacola arrived at Baltimore and boarded the Navy collier Neptune. On 17 May, the second group arrived at New York City to embark in Jupiter, also a service collier. Neptune proceeded down the Chesapeake Bay to Norfolk and received extra cargo there on 23 May. The same day, Jupiter departed from New York to cross the Atlantic. Neptune left Norfolk on 25 May.5

Jupiter, escorted by destroyers Sterett and Walke, carried 59 men of all ratings of the detachment, under the command of Lieutenant G. C.  Dichman. During the time at sea, Dichman “held lectures every day on general subjects connected with the Navy,” and organized the detachment “into rifle men and machine gun crews” that were “stationed along the rails at ‘General Quarters.’” Arriving in French waters on 2 June, Jupiter radioed for an escort, which arrived the following day. As Jupiter approached the Gironde Estuary, officers declared that they “saw a torpedo pass ahead of the ship” while “another torpedo was supposed to have missed us aft.” Despite the excitement this created, Dichman thought the suspicious objects had been porpoises. The vessels entered the Gironde Estuary on 4 June, anchored overnight, and Jupiter docked at Brest on 5 June. Thus, Aeronautic Detachment No. 1 became the first U.S. military unit to arrive in France during the conflict. The men disembarked on 9 June and were quartered in a French barracks in Brest. As Dichman later reported, there “the men were subsisted on the French ration which was not much and the lack of coffee and tea and its substitute of red wine was not particularly appreciated.”6

Neptune proceeded from Norfolk, escorted by the destroyers Jarvis and Perkins. During the voyage to France, Whiting ensured that his men, mostly new recruits with very little naval service, “were instructed in the rudiments of what every blue-jacket should know.”7 These basic naval skills included “general drills” as well as “special instruction for the Aviation personnel.” The men of the detachment also stood watch and engaged in target practice. The voyage passed uneventfully except on the night of 2 June, when heavy weather swept away two life boats. Neptune, arriving in waters where U-boats were expected, began zigzagging on 5 June. The following day, it met two French patrol vessels who escorted it into port.8 Neptune arrived at St. Nazaire on 8 June. Whiting reported to the U.S. naval attaché, and after consultation with the French Ministry of the Marine, the six officers and 63 men were sent to Brest. Whiting’s group arrived at Brest on 11 June; they were quartered at the French torpedo boat station there.9

Whiting departed for Paris on June 12, where he met with both American and French officials the next day in an effort to establish a mission for the detachment, as well as to arrange for the disposition of the unit. In Paris, Whiting found that among the French “there was practically no understanding as to the arrangements made in the United States whereby this Detachment had been sent to France.” Whiting wrote that, despite their surprise, “the French expressed their gratitude and bade us welcome in an enthusiastic manner.” With introductions out of the way, the French made recommendations to Whiting on the necessary force structure of a naval aviation detachment, the training required for pilots and mechanics, and possible missions for the American fliers. After this consultation, Whiting and the French agreed to send the American pilots to the French army school of instruction at Tours and the observers to the French navy school at St. Raphael. Continued discussion resulted in the decision to establish “a suitable nucleus for the operation and manning of three air stations and a training school,” respectively located at Dunkirk, at the mouths of the Loire River (St. Nazaire) and Gironde Estuary (Brest), and at Lake Hourtin in France’s Médoc region. The French revealed their plans for 50 seaplane bases for operations against German submarines, as well as additional ones for dirigibles. Of these 50, they wanted the Americans to operate 12.10

Whiting returned to Brest on 12 June with orders to take the detachment to the French naval air station at Camaret. The French housed the detachment in several hotels. Lieutenant V. C. Griffin reported that “[o]n June 15 the American flag was hoisted over the hotel and yard occupied by this detachment, and it is thought that possibly this was the first instance of its kind during the war.”11  With these arrangements made, Aeronautic Detachment No. 1 began training at the French bases.12 While the unit personnel trained, the detachment headquarters in France was established. Preparations to create an American base began at Lacanau on the Bay of Biscay, which soon became home to the first U.S. naval air station in France: NAS 001 Le Moutchic. In August 1917, students from the training schools began manning the station.13 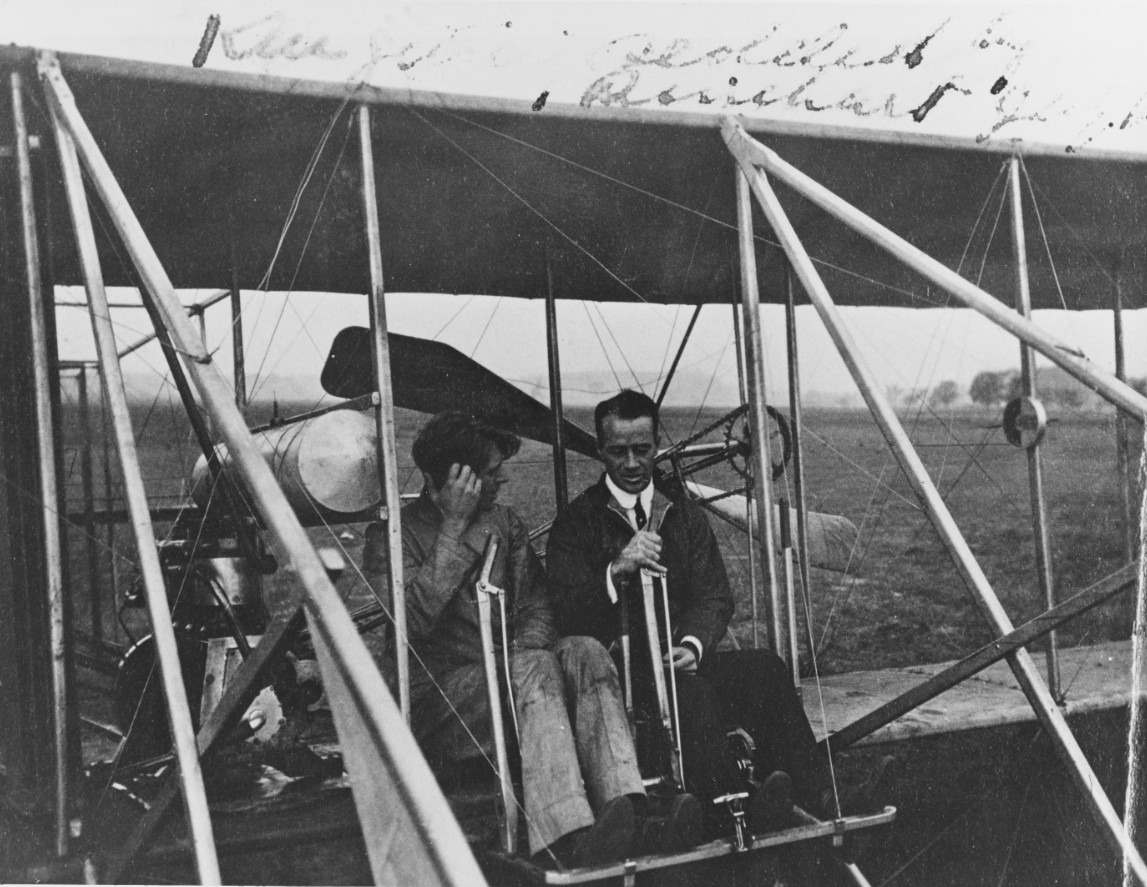 Lieutenant Kenneth Whiting (right) under instruction in a Wright airplane, circa 1914 (NH 74081). 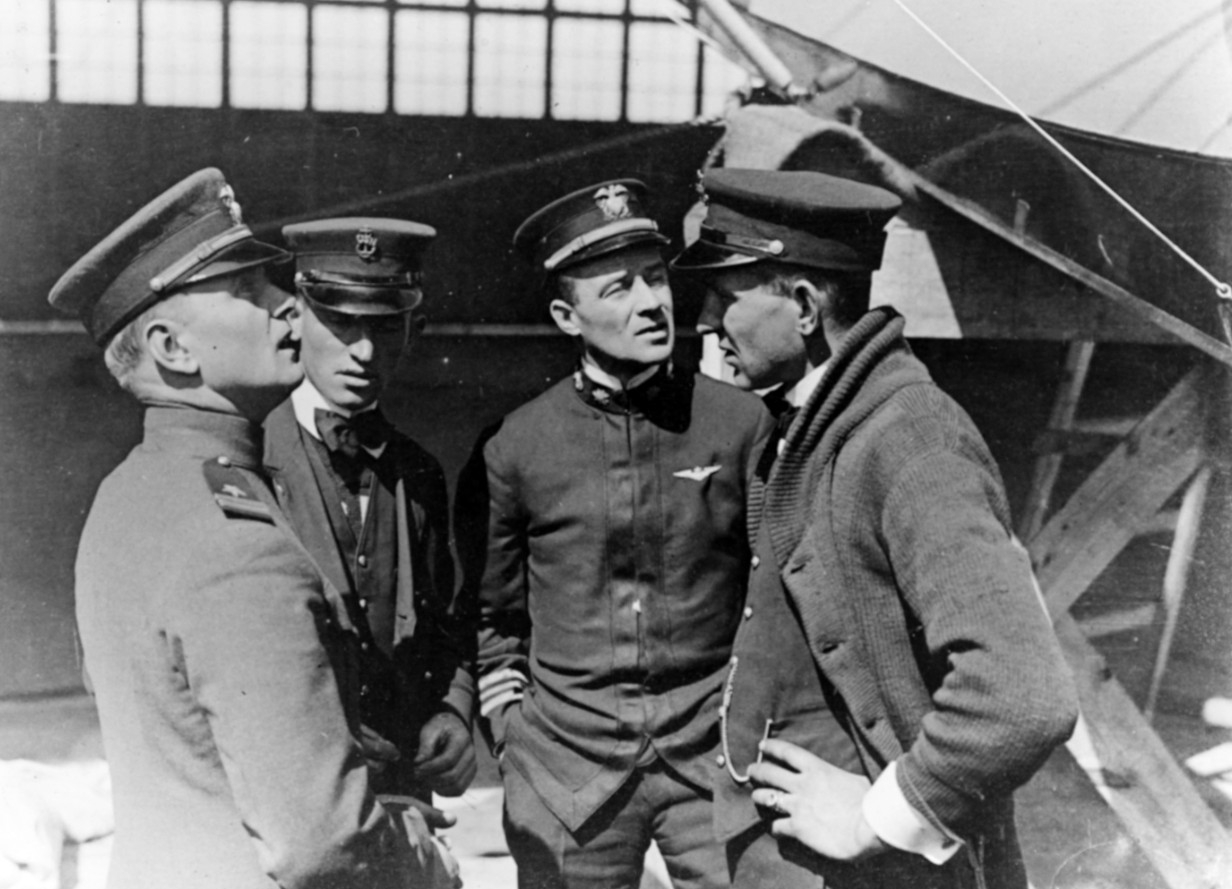 U.S. Navy aviation would increase vastly during World War I from the humble beginnings of Aeronautic Detachment No. 1. The Navy’s overseas air arm expanded from the 129 personnel of the detachment to 1,147 officers and 18,308 men, who made more than 20,000 flights. Overseas installations expanded to 20 patrol bases, with aircraft covering more than 790,000 miles of patrol routes. A review board at the end of war concluded that “the organization of the U.S. Naval Aviation Force in Europe for which no precedent existed, was accomplished in a most efficient, energetic, and expeditious manner.”14 Although Aeronautic Detachment No. 1 had arrived in Europe without planes or equipment, 24 manufacturers had delivered 16,000 planes and 25,000 motors to the Navy by the end of the war, representing an extraordinary surge in industrial production.15

The men of the U.S. Navy Aeronautic Detachment No. 1—and one of the ships that carried them to Europe— remained involved in naval aviation. In 1920, Jupiter began conversion to Langley, the Navy’s first aircraft carrier. Whiting continued his involvement in naval aviation in Europe until the end of World War I and was awarded the Navy Cross for exceptionally meritorious service. After the war, he took part in overseeing Jupiter’s conversion. He went on to command Langley and developed standard techniques and procedures for carrier operations. Later, he served as executive officer on the carrier Saratoga, and contributed significantly to planning, construction, and fitting-out of the carriers Ranger, Yorktown, and Enterprise. Although Whiting nominally retired in 1940, he was retained on active duty as general inspector of Naval Aircraft, Eastern Division, and commander of NAS New York (Brooklyn). He died in 1943. The seaplane tender Kenneth Whiting (AV-14) and NAS Whiting Field in Milton, Florida, were named in his honor. 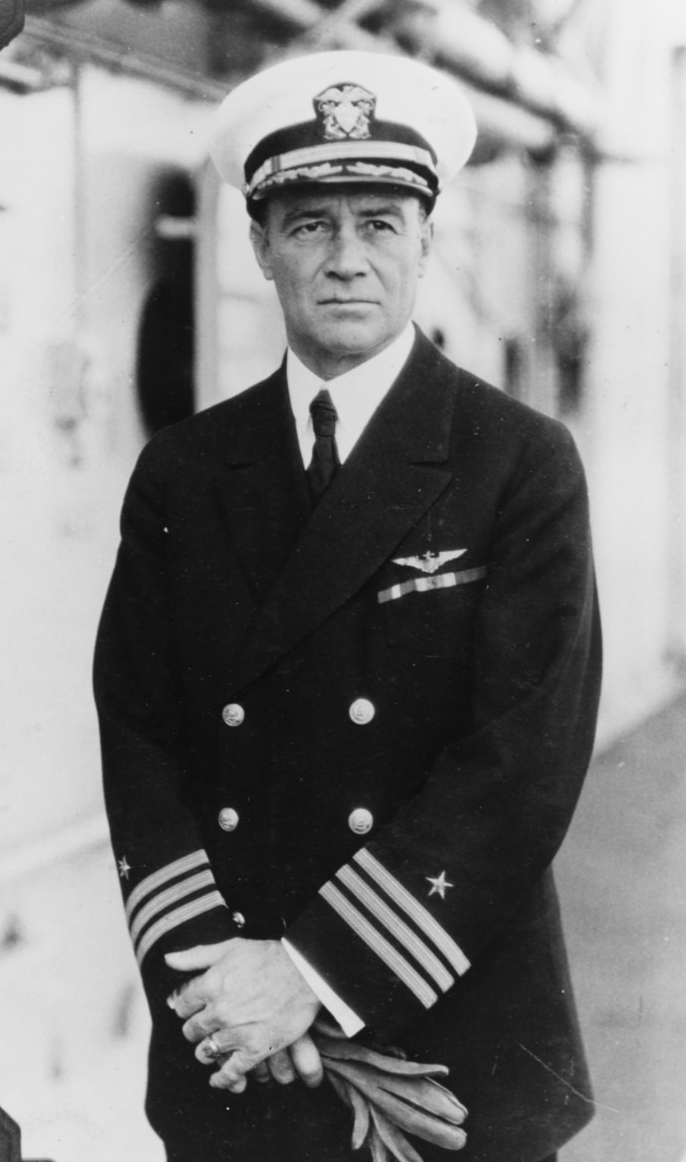