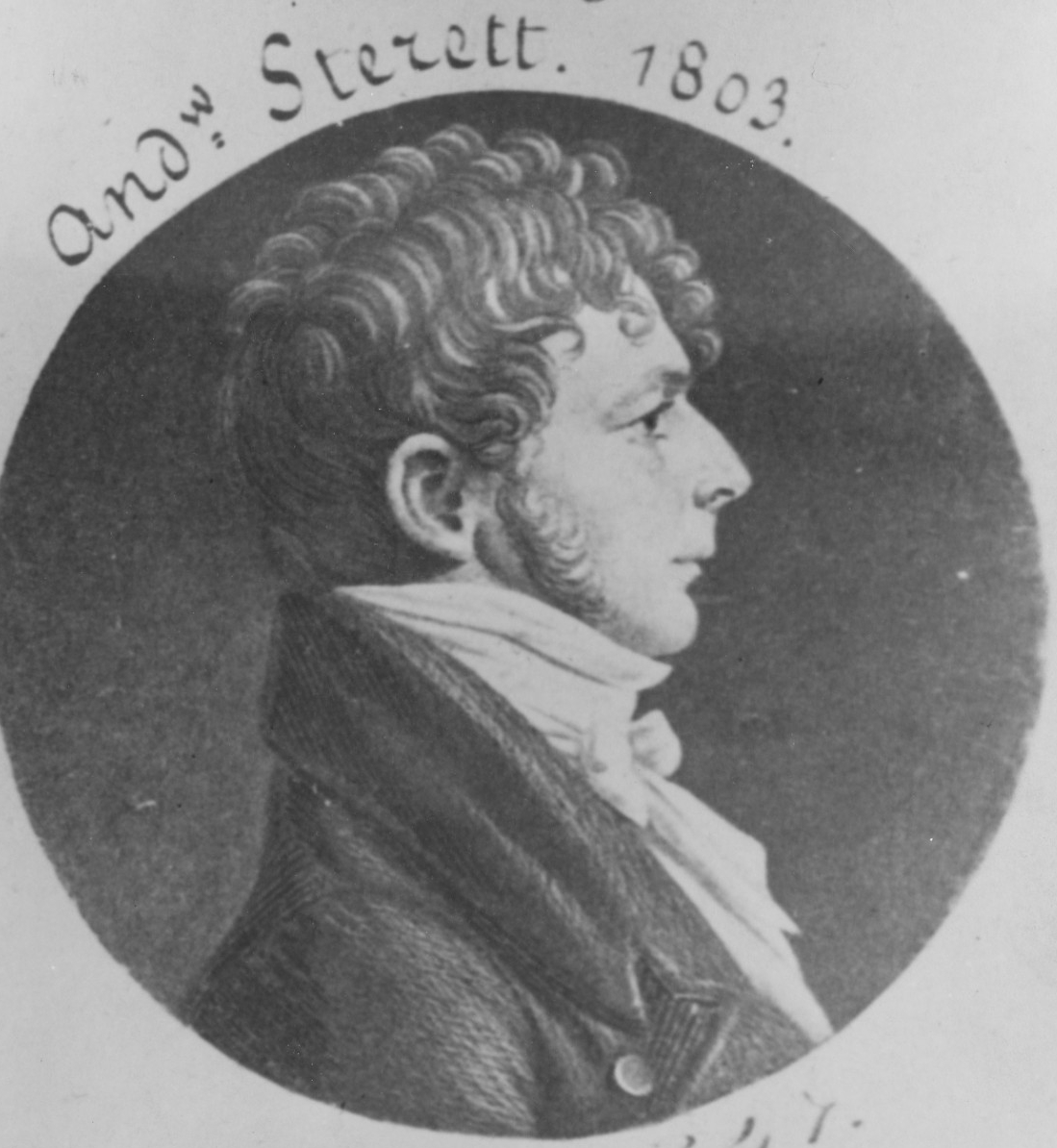 Caption: Master Commandant Andrew Sterett, USN, Photograph of what was originally an 1803 profile portrait. The accuracy of the profile was probably achieved by the physionotrace method for which the artist, Charles St. Memin, was noted. (Naval History and Heritage Command, NH 44336)

Andrew Sterett-- born 27 January 1778 in Baltimore, Md.—was the son of John Sterett, a Revolutionary War captain and successful shipping merchant. He was commissioned in the Navy on 25 March 1798 and assigned to the frigate Constellation as third lieutenant under Capt. Thomas Truxtun. During the Quasi-War with France, he commanded a gun battery on board Constellation when she captured the 40-gun frigate L'lnsurgente on 9 February 1799. Despite the criticisms he received from the anti-federalist press for summarily executing Seaman Neal Harvey after he abandoned his post, the Navy promoted Sterett to first lieutenant. He participated in Constellation's action against the 54-gun frigate La Vengeance on 1 February 1800.

Given command of the 12-gun schooner Enterprise, Lt. Sterett captured the French privateer V'Amour de la Patrie, on Christmas Eve 1800. He later sailed in Enterprise from Baltimore, in June 1801, for service with the Mediterranean Squadron. While on that cruise, Enterprise engaged and captured the 14-gun corsair Tripoli and her 80-man crew with no casualties on 1 August 1801. In gratitude, President Thomas Jefferson presented Sterett a sword and his crew was also rewarded with an extra month’s pay. Lt. Sterett turned over command of Enterprise to Lt. Stephen Decatur in April 1803. He was then promoted to master commandant and offered command of a brig that was then under construction. Disappointed over his standing in the Navy, vis a vis that of Decatur, Sterett resigned his commission on 29 June 1805 to sail in the merchant marine. While on board the merchant ship Warren off South America, Sterett died on 9 June 1807 from the effects of a self-inflicted gunshot wound to the head.

The first Sterett (Destroyer No. 27) was laid down on 22 March 1909 at Quincy, Mass., by the Fore River Shipbuilding Co.; launched on 12 May 1910; sponsored by Miss Dorothy Rosalie Sterett Gittings; commissioned on 15 December 1910 at Boston, Mass.; Lt. Robert L. Berry in command. 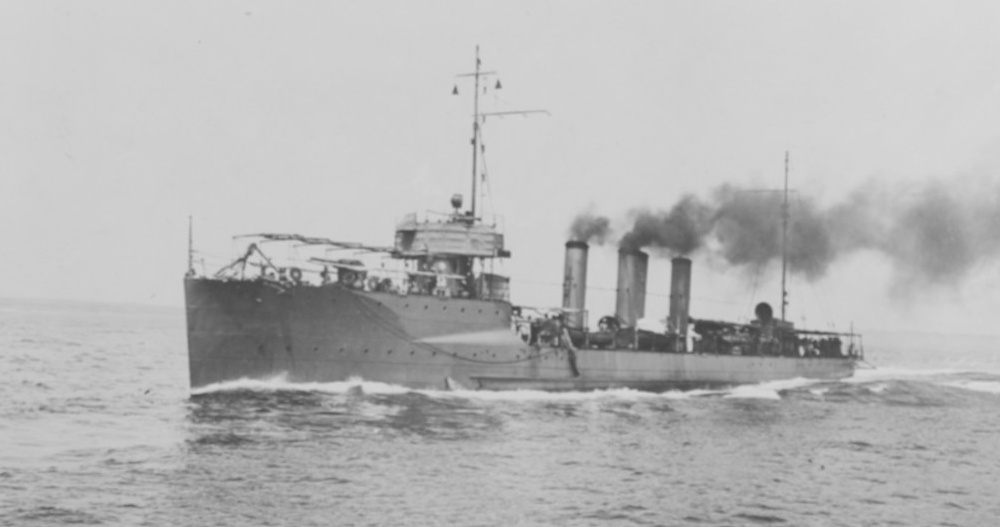 After her commissioning, Sterett remained at Boston into the new year, finally getting underway on 22 January 1911. Making her way southward to Charleston, S.C. with port visits en route, she eventually headed back north and docked at the New York [N.Y.] Navy Yard on 25 March. While underway she was assigned to the Ninth Division, Atlantic Torpedo Fleet. Undocking on the 31st, she departed New York on 3 April for a run to the Virginia capes, returning on 9 April. Remaining at New York until 1 June, she departed for Boston and arrived there via Newport on the 3rd. Sterett then spent the remainder of June undergoing trials and cruising between Boston and Hampton Roads, Va. The warship continued to cruise along the Eastern seaboard through the second half of 1911, with docking periods interspersed, until arriving at the New York Navy Yard on 28 December.

Standing out of New York on 4 January 1912, Sterett departed for the annual winter exercises in the Caribbean. During the initial part of this passage, she was caught in a gale. On 9 January, while at Bermuda, Sterett submitted a report documenting the damage and equipment lost in the storm. During the course of the training, the Atlantic Torpedo Fleet was re-designated the Torpedo Flotilla, Atlantic Fleet on 4 March. Sterett returned northward at the completion of the training cycle in April and spent a period in the yard at New York. Afterward, she operated from Boston and conducted patrols and training exercises in the waters off the northeast coast. The destroyer arrived at the New York Navy Yard on 19 October and remained there through the new year.

Sterett largely repeated her annual routine through 1913. This time, however, she ended the year at the Charleston Navy Yard, where she remained into 1914. Though placed in reserve on 5 November 1913, she continued duty with the Torpedo Flotilla. On 20 January 1914, she steamed from Charleston, and, after stops at Cape Canaveral, Miami, and Key West, Fla.; and Mobile, Ala., reached New Orleans, La., on 2 March. The following day, she joined the newly-created Reserve Torpedo Flotilla, operating in the Gulf of Mexico out of Galveston, Tex. In June, she returned to the Atlantic seaboard, this time based at Norfolk, Va., and resumed coastal patrols.

Caption: Destroyers coaling at Dry Tortugas, Fla., 15 March 1914. Members of the Second Division, Torpedo Flotilla, Atlantic Fleet, these ships are (from left to right): Monaghan (Destroyer No. 32); Sterett (Destroyer No. 27); and (perhaps) Terry (Destroyer No. 25). This photo is one of a series from the collection of a Walke (Destroyer No.34) crewmember. Courtesy of Jim Kazalis, 1981. (Naval History and Heritage Command Photograph, NH 99855)

After again spending the end of the year at Charleston, she got underway on 15 February 1915 and headed south to conduct training off Florida and in the Caribbean. Her training completed, the warship returned to Charleston on 30 April. Sterett did not get underway again until 7 July, when she set a course for Newport, R.I. Over the next four months, she cruised the Atlantic coast between Newport and Savannah, Ga. Departing the latter on 14 November, Sterett headed for winter quarters at Pensacola, Fla. via Key West and arrived on the 17th. 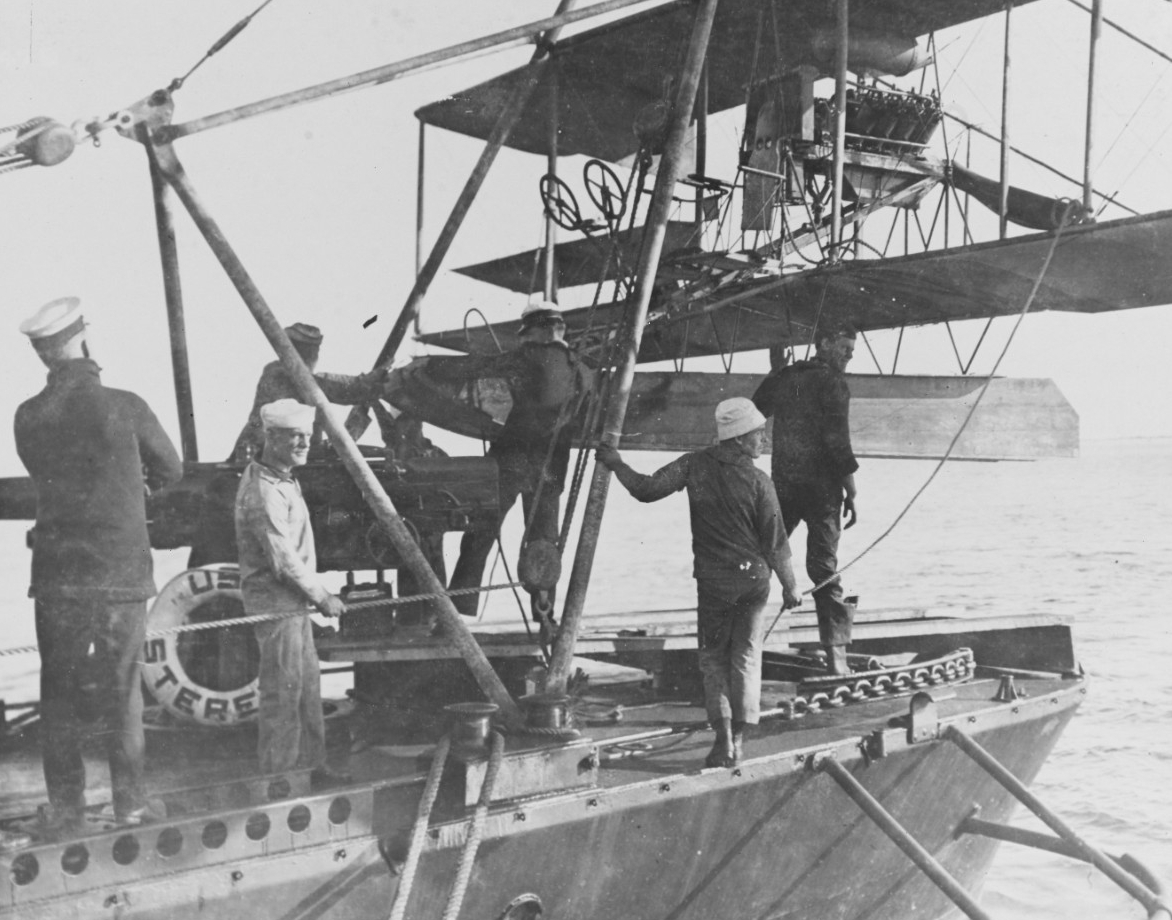 Sterett's complement was reduced on 5 January 1916 and, throughout that spring, she operated almost exclusively in the Caribbean. On 1 June 1916, she was a part of the fleet which supported the marines that landed at Monte Cristi, Dominican Republic, and marched to Santiago to restore order and to protect lives and property. Soon thereafter, Sterett returned to Norfolk and resumed operations along the east coast. On 2 October, Sterett and Monaghan (Destroyer No. 32) received orders assigning both to neutrality duty. Later, both destroyers and Lamson (Destroyer No. 18) cruised with units of the Florida Naval Militia (1-11 December). Sterett and Monaghan then parted company with Lamson and made a port visits to Savannah, Ga. (12-17 December), Key West, Fla. (18-19 December), Mobile, Ala. (20-21 December) for recruiting purposes..

On 1 January 1917, she entered the Mississippi River, stopped at New Orleans, La., and steamed up the river to Vicksburg, Miss. She re-entered the Gulf of Mexico and patrolled the Texas coast. Shifting to Key West on 18 March, the destroyer ranged as far as the Cuban coast and then returned to her home port at Charleston. 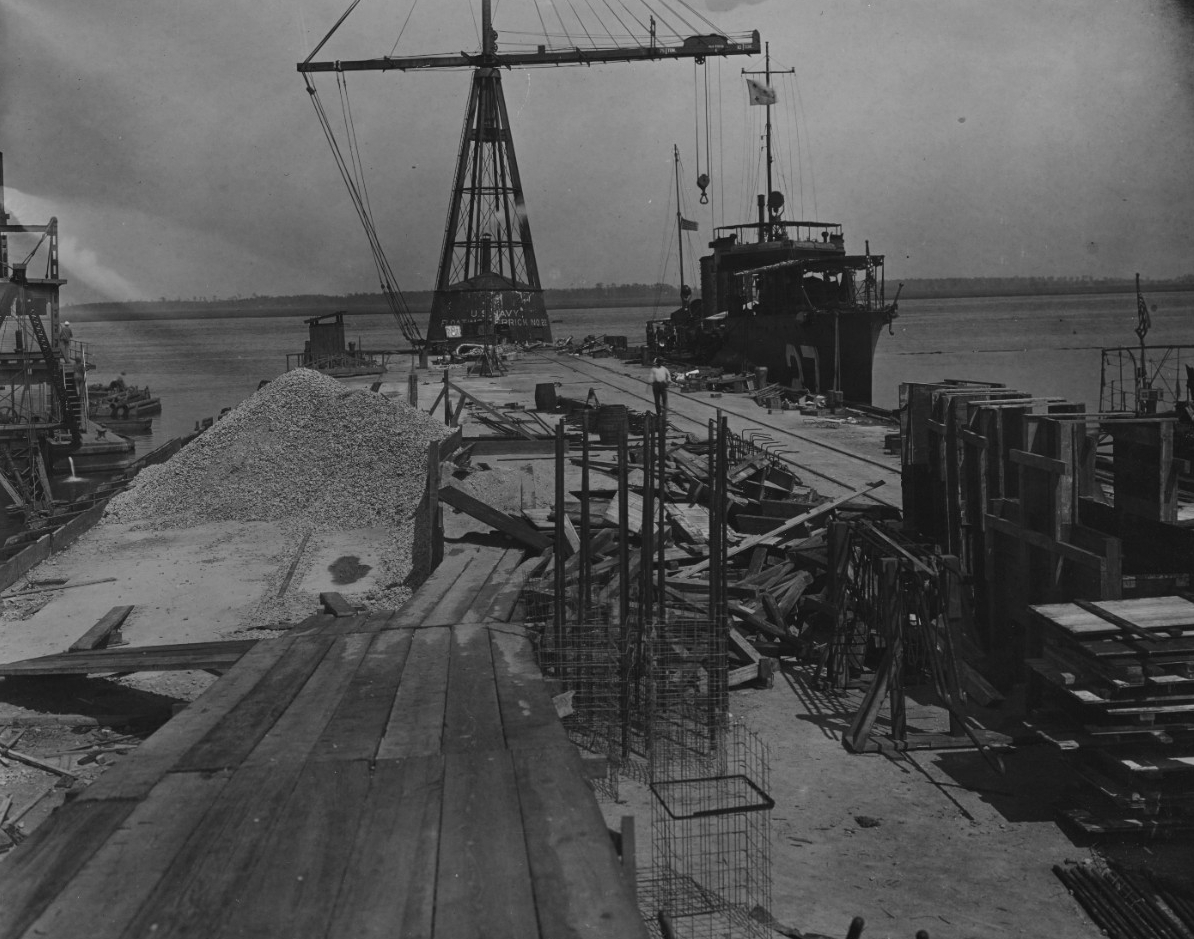 Caption: Sterett at Charleston Navy Yard on 3 April 1917. At the end of the pier, in the center, is Floating Derrick No. 22. (Naval History and Heritage Command Photograph, NH 45244)

The United States’ declaration of war against Germany on 6 April 1917, found Sterett at Charleston undergoing repairs. That work was completed on 28 April. On 3 May, she received orders to proceed to the Boston [Mass.] Navy Yard, for examination and repair of her port turbine and to take on stores as necessary to prepare for distant service. Sterett got underway and rendezvoused with Jupiter (Fuel Ship No. 3) and Walke (Destroyer No. 34), ten miles southeast of the Scotland [N.J.] Lightship on 23 May and departed for distant service. Forced to anchor off Royon, France, to make minor repairs on 5 June, she got underway again two days later, and in the late afternoon of 7 June stood into Brest, France. The next morning she got underway in company with Walke for Queenstown [Cobh], Ireland (Base No. 6). Arriving on the 9th, the ships reported for duty to the Commander, American Naval Forces. She was to operate from Queenstown to meet convoys and conduct them to either Berehaven, Ireland, or to Devonport, England. At these points, British and French destroyers assumed responsibility for the last leg of the voyage.

While on patrol west of Ireland at 8:00 p.m. on 21 June 1917, Sterett received a wireless message that the British steamer Lord Roberts was being shelled by a submarine (U-62, Kapitänleutnant Ernst Hashagen, commanding). The destroyer then intercepted a subsequent message that the steamer’s crew had abandoned ship. Sterett immediately proceeded to the reported position. Despite searching the vicinity into the 23rd, she found neither the survivors nor U-62. Needing to refuel, she broke off the search and steamed for Berehaven. Almost two months later, Sterett intercepted a wireless message from HMS Zinnia. The Azalea-class sloop had collided with Benham (Destroyer No. 49), and Sterett and HMS Crocus responded to render assistance. Zinnia took Benham in tow to Daunt, Ireland, with Sterett and Crocus serving as escorts. Just under three months later, on 3 November, Sterett herself suffered a collision with HMS Camellia. Both suffered damage, but neither was incapacitated.

Sterett was underway heading for Capel Island on 13 November 1917, when a torpedo wake was sighted 75 yards to starboard. After going to full speed ahead and sounding general quarters, she dropped a depth charge that failed to explode. She then reversed course, dropped a second depth charge and it too failed explode. Not having seen a submarine and developing engine trouble, she set a course for Queenstown. Eight days later, while in convoy, the ship leading the left flank column was torpedoed on her port side. Again she increased speed and sounded general quarters. No submarine was detected, however, and Ammen and Fanning detached from the convoy and escorted the torpedoed merchantmen to Rosslare, Ireland. The following month, on 8 December, Sterett stood in to St. Mary’s, England, and picked up the survivors of the sunken Jacob Jones (Destroyer No. 61) that were landed there and carried them to Queenstown. Near month’s end, Sterett rescued eight men in a boat from the abandoned Santee (ex-Arvonian). Sterett later spotted the torpedoed Q-ship (U-61, Kapitänleutnant Victor Dieckmann), down by the stern, being towed by two tugs. 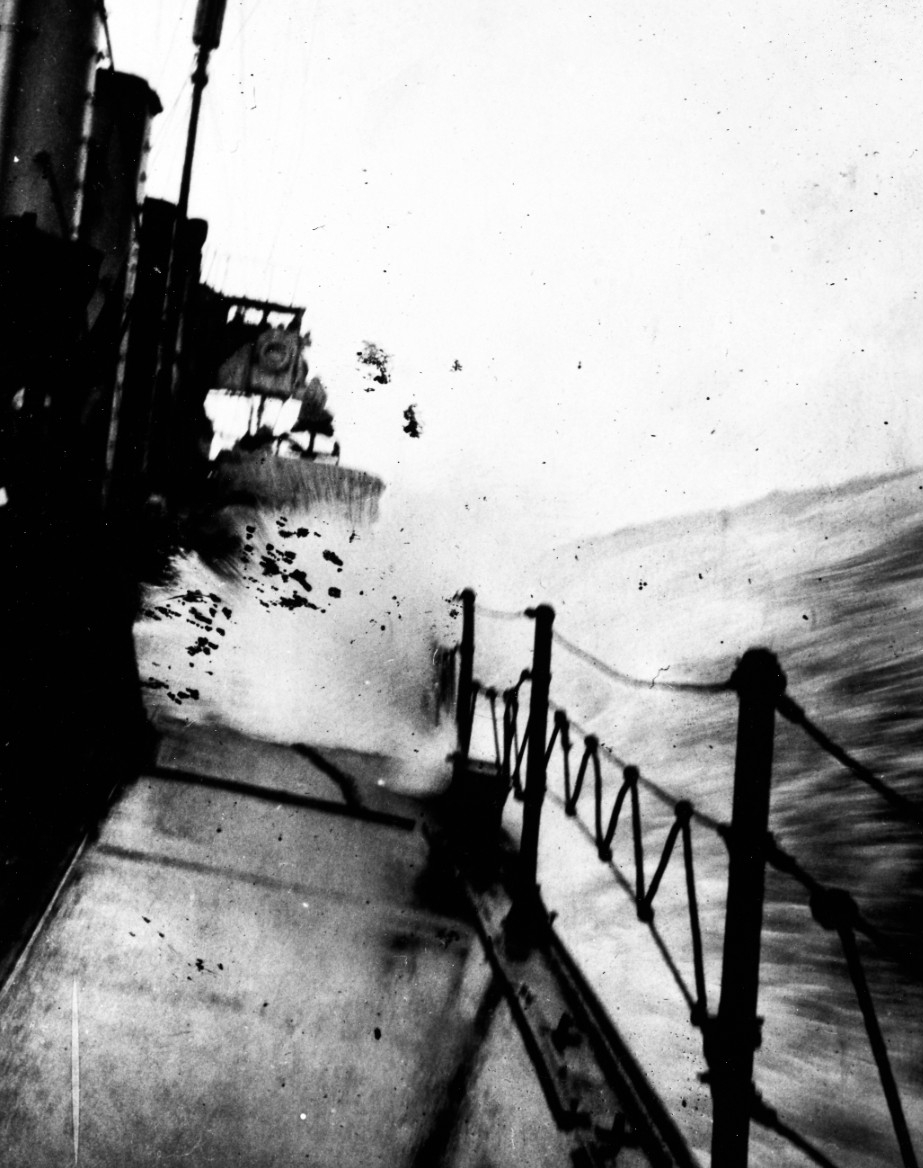 Caption: Sterett in rough seas off Ireland's coast, 1918. This view looks forward along her starboard side, as a wave breaks over her deck amidships. Collection of Lt. Cmdr. Leonard Doughty, 1929. (Naval History and Heritage Command Photograph, NH 1868)

Sterett did not have her first encounter with a German submarine until 31 May 1918. While in company with McCall Destroyer No. 28), escorting the oiler Astrakhan, from Queenstown to a rendezvous point, Sterett came upon a U-boat. Observing a periscope on the port quarter both destroyers maneuvered to attack. As Sterett closed, the submarine rapidly submerged. Sterett began dropping depth charges. After exhausting her supply of depth charges, Sterett pursued the enemy by the U-boat's wake of bubbles and trail of oil, hoping to force her to exhaust her batteries and air supply. She continued the pursuit through the night, guided in the darkness only by the fumes of the sub's leaking oil. Finally, at dawn, the destroyer's persistence was rewarded. She sighted the U-boat on the surface about 1,000 yards ahead. Sterett sliced through the water at top speed seeking to ram the submarine; but the U-boat countered by swinging hard to port. Sterett passed within 20 feet of the submarine and, as the U-boat attempted to dive, brought her guns to bear. Without sufficient time to bracket their adversary, however, Sterett's gunners watched helplessly as the submarine slid beneath the surface. Though the destroyer doggedly searched for the submarine through most of 1 June, her quarry, later identified as U-97 (Kapitänleutnant Hans von Mohl), had escaped. For their dogged determination, the officers and men of Sterett received the commendation of the Commander-in-Chief, Coast of Ireland, Vice Adm. Lewis Bayly, RN.

The Armistice ended hostilities on 11 November 1918 and brought an end to Sterett's strenuous convoy and anti-submarine duties; and, by 3 January 1919, she was back in the United States at Charleston. From there, she moved to Philadelphia where she was decommissioned on 9 December 1919. On 8 March 1935, after a little more than 15 years of inactivity, Sterett was stricken from the Navy list. On 28 June, she was sold to M. Black & Co., Norfolk, Va. in accordance with the London Treaty for the Reduction of Naval Armament. The purchaser scrapped her on 14 July 1936.