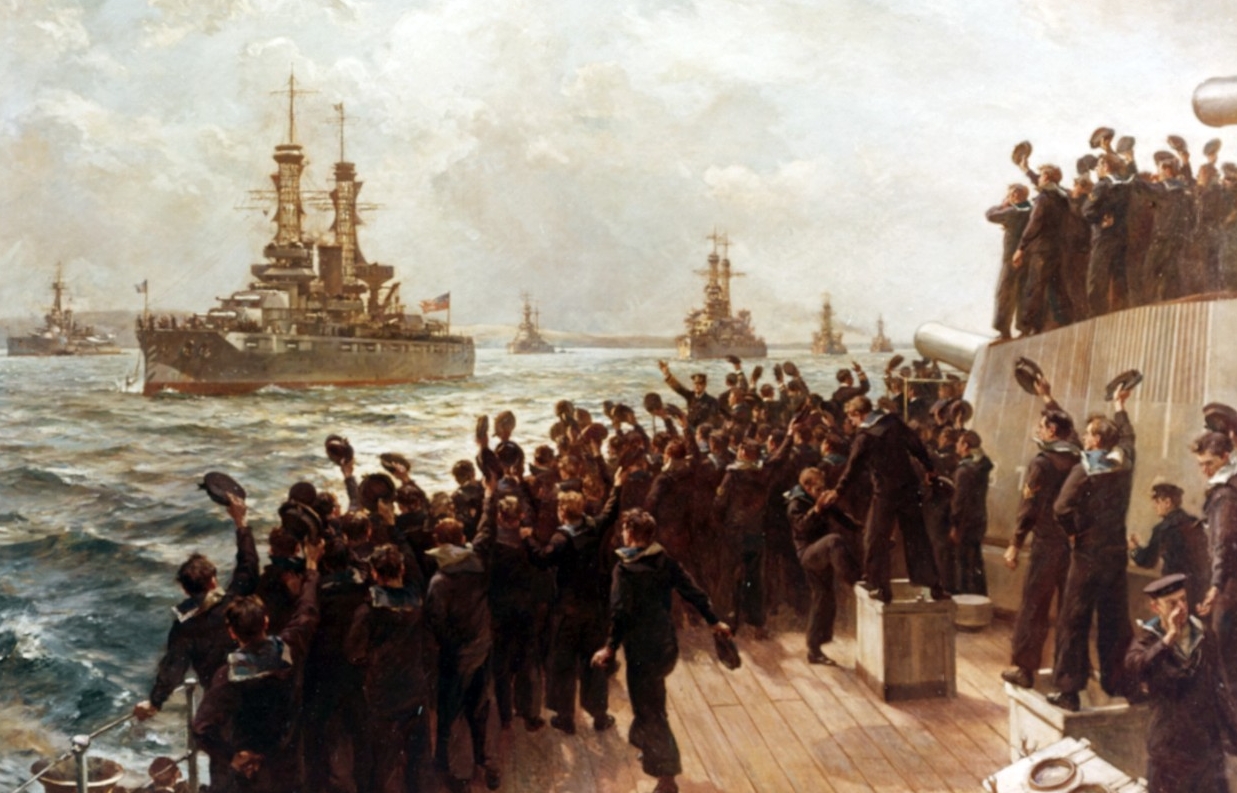 "Arrival of the American Fleet at Scapa Flow, 7 December 1917." Oil on canvas by Bernard F. Gribble, depicting Battleship Division Nine being greeted by British Adm. Sir David Beatty and the crew of HMS Queen Elizabeth. Ships of the U.S. column are (from front) New York (Battleship No.34), Wyoming (Battleship No. 32), Florida (Battleship No. 30) and Delaware (Battleship No.28). Courtesy of the U.S. Navy Art Collection, Washington, DC (NH 58841-KN).

“We are ready for the U.S. Squadron and hope that all will go [well] with them. It will be a great day when we have the larger units of the two great Services working together.”

On 6 April 1917, the United States declared war on Imperial Germany and entered World War I as a co-belligerent “Associated Power” on the side of the Allies—Great Britain, France, Italy, Japan, and Russia. A few days later, on 10 April, Josephus Daniels, Secretary of the Navy, and Admiral William S. Benson, Chief of Naval Operations, met with Admiral Sir Montague E. Browning, RN, Commander of British Naval Forces in the West Indies, and Rear Admiral Maurice F. A. de Grasset, Commander of French Naval Forces in the West Indies, to discuss inter-Allied naval cooperation. Both foreign admirals stressed the need for destroyers and other patrol craft to be sent to Europe to help combat the German U-boat threat. As a result, the U.S. dispatched an initial deployment of six destroyers that arrived on 4 May and operated from Queenstown (Cobh), Ireland. This deployment was bolstered with additional destroyers and patrol vessels to be stationed both in Ireland and France.

The Royal Navy was initially not interested in having U.S. battleships sent to Europe. That changed, however, when the need to man newly built light cruisers and destroyers, needed for anti-submarine operations, created a shortage of trained sailors. To meet this demand, the Admiralty chose to decommission some of the older battleships in the Grand Fleet and transfer their sailors to meet the shortfall. In the interest of maintaining its numerical superiority over the German High Sea Fleet, the Admiralty, in September 1917, requested that the U.S. Navy send a contingent of battleships to reinforce the Grand Fleet. Given the abundance of high-quality coal in the British Isles, and the scarcity of oilers to support the fleet, the British requested that the Navy dispatch battleships fueled with coal. 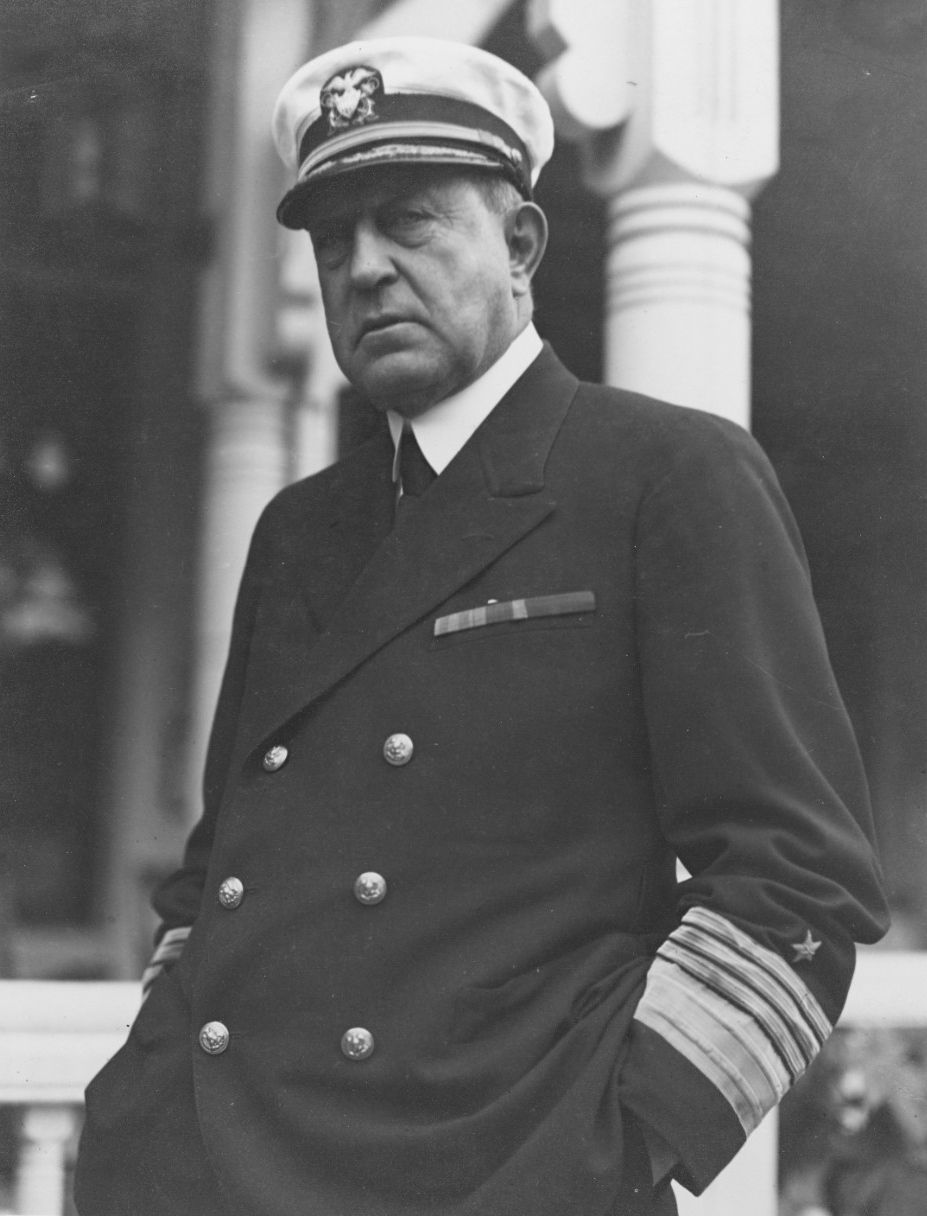 The battleship arrived at Tompkinsville (Staten Island), New York, on 15 November, and the next day, she shifted to the New York Navy Yard to be fitted out for distant service. New York remained at the yard until 22 November, when she departed for Lynnhaven Roads, Virginia, arriving on the next day.

At 1500 on 25 November 1917, BatDiv9 sailed from Lynnhaven Roads, with Manley (Destroyer No. 74) in escort. Manley was to join the convoy escort and patrol forces based at Base No. 6, Queenstown, but Division Nine was bound for the Royal Navy’s Grand Fleet anchorage at Scapa Flow, Orkney Islands, Scotland, to serve under the command of Admiral Sir David Beatty, RN. The weather on the voyage was bad from the start, but worsened during the night of 30 November to1 December. Delaware and Florida lost contact with New York and Wyoming. New York took on over 250 tons of water in her chain locker and forward compartments, and only the efforts of bailing lines for three days prevented the ship from foundering. BatDiv9 eventually re-consolidated at 0700 on 7 December, at Cape Wrath, and continued on to Scapa Flow. With a hearty welcome from the crews of the ships of the Grand Fleet, the Americans anchored at noon.

In his memoir, Yarns of a Kentucky Admiral, Rodman stated, “I realized that the British fleet had three years of actual warfare and knew the game from the ground floor up; that…there would be a great deal to learn practically.”2 He, therefore, could not conceive of harmonious cooperation if there were “two independent commands in one force…and [therefore] the only logical course was to amalgamate our ships and serve under the command of the British commander-in-chief.”3 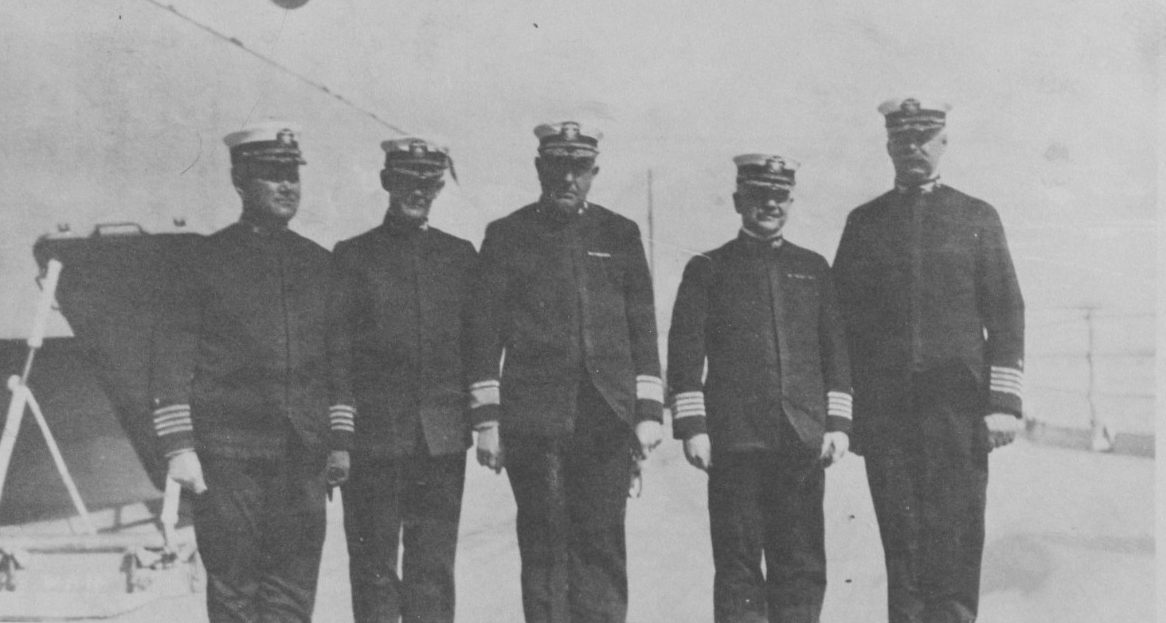 Under Beatty, Battleship Division Nine was re-designated the Sixth Battle Squadron and assigned a position in the fast wing of the Grand Fleet. The U.S. ships, however, needed time to learn and become adept with Royal Navy practices. Two areas of particular concern for Beatty were the state of U.S. communications and gunnery. The disparity between the two navies and their relative capabilities became readily apparent, especially in light of the Britons’ wartime experience. The realization of this difference was quite sobering for the Americans. Accordingly, Rodman set his division to extensive training in order to integrate fully with the British. An example of this training included the Grand Fleet getting underway on 30 January 1918 to conduct maneuvers and tactical training as “opposing fleets” in the waters between Norway and Scapa Flow. The exercise concluded on 2 February and the fleet returned to its anchorage in the Orkneys.

Later in 1918, the U.S. battleships at Scapa Flow would be further reinforced by Texas (Battleship No. 35), and Arkansas (Battleship No. 33) would replace Delaware. Three additional battleships under Rear Admiral Thomas S. Rodgers, Nevada (Battleship No. 31), Utah (Battleship No. 31), and Oklahoma (Battleship No. 37) were deployed to Europe. Designated Battleship Division Six (BatDiv6), they were stationed at Bantry Bay, Ireland, and placed to counter the threat of a feared breakout of German battlecruisers into the Atlantic to hunt convoys in the Western Approaches. During these months, the American battleships in Scotland, first at Scapa Flow, then at Rosyth, conducted convoy operations along with additional tactical and gunnery exercises. Although the Sixth Battle Squadron never engaged the German High Sea Fleet in a climactic “second Jutland” as anticipated, their service with the Grand Fleet would see the U.S. battleships and their crews become far more capable and competent, and the experience in European waters would exert a higher level of naval professionalism that influenced the Navy during the inter-war period and contributed to the successful U.S.–British cooperation during World War II.

Rodman, Hugh. Yarns of a Kentucky Admiral (Indianapolis, IN: Bobbs and Merrill, 1928).