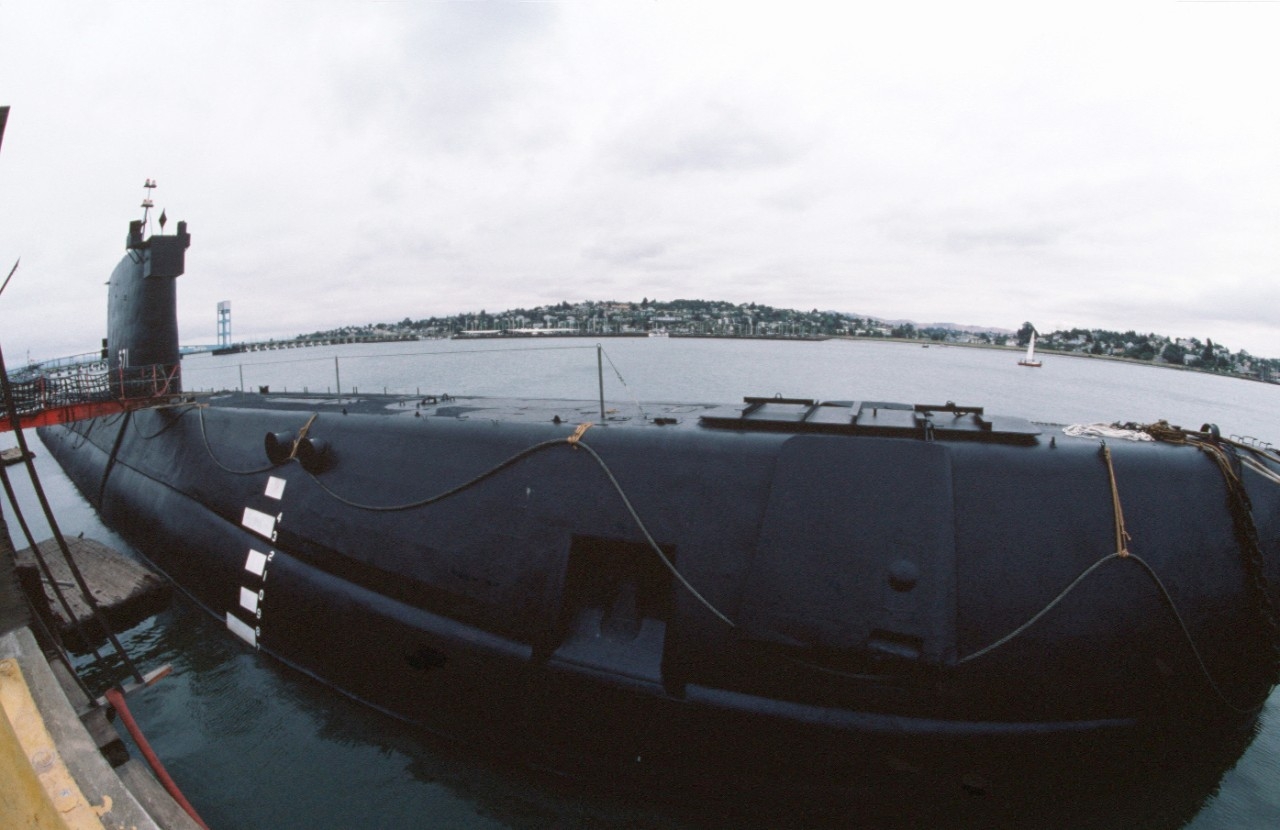 USS Nautilus, the world’s first nuclear-powered submarine, was recently towed from her home at the Submarine Force Museum upriver to a pier at Naval Submarine Base New London, where she will undergo an estimated $36 million preservation project. The work is scheduled to be complete in the summer of 2022. The last time Nautilus left her moorings for preservation work was in 2002 for a $4.7 million refurbishment. The upgrades will include: full blast and paint of all exterior; repairs to her superstructure; full topside decking repairs; all internal/external tanks inspected, repaired, and preserved; lighting and electrical distribution upgrades; and enhanced access to certain areas for staff members. The objective of the work is to give Nautilus another 30 years of availability to the public to continue to tell her stories of the bold and courageous Sailors of U.S. submarine force. According to NHHC Director Sam Cox, this will be the most significant work completed on Nautilus since she opened as a museum ship in 1986. For more, read the article. 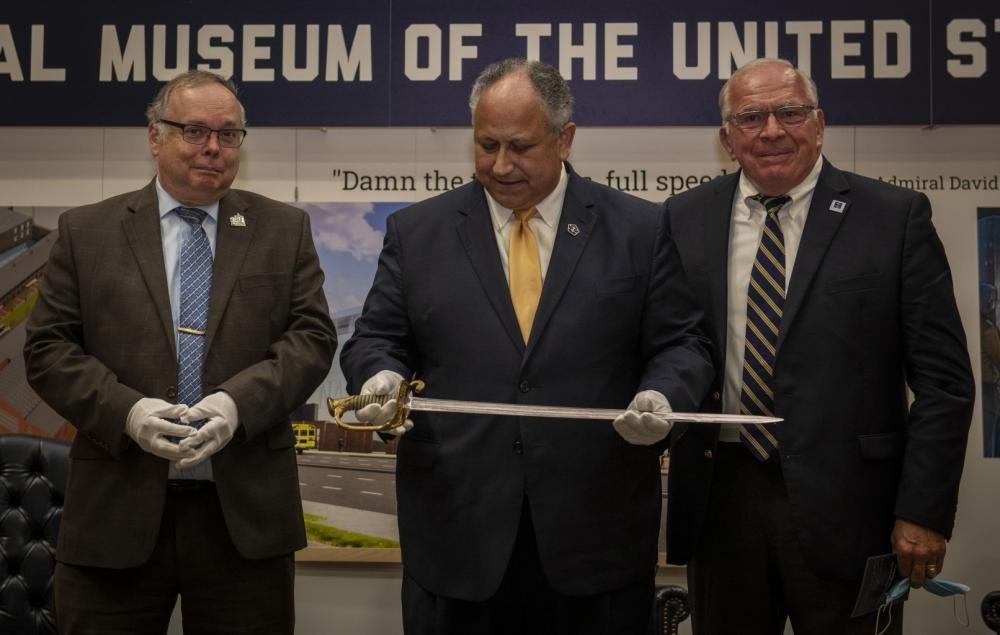 During Secretary of the Navy Carlos Del Toro’s first official visit to the National Museum of the U.S. Navy, NHHC presented him with the sword of Adm. David Glasgow Farragut, which will be displayed in the Secretary’s office at the Pentagon. The presentation was part of the Navy’s celebration of its 246th birthday on Oct. 13. “I am deeply honored to have Admiral Farragut’s sword in my office for all our visitors to see,” said Del Toro. “I think it will exemplify the spirit that resides in the Secretary of the Navy’s office.” The sword came from the estate of Farragut’s son, Loyall, and it contains important markings on the front and back of the blade. “The commemorative sword bears the names of significant ships and battles during Farragut’s career,” said NHHC museum specialist Jennie Ashton. “The obverse blade is etched with names and battles from the 1862–1863 operations on the Mississippi River and the reverse bears the names of ships under Farragut’s command during the Battle of Mobile Bay.” Born in Knoxville, TN, on July 5, 1801, Farragut served 59 years in the Navy from 1810–1869. He began his naval career as a midshipman, but climbed the ranks serving initially as executive officer on various ships before being called upon to command. At the onset of the American Civil War, he had to choose between his native state of Tennessee and the Union. Two years after declaring his allegiance to the North, he led his squadron in his most touted victory of the war—The Battle of Mobile Bay—where he captured two Confederate ships. For more, read the NHHC press release. 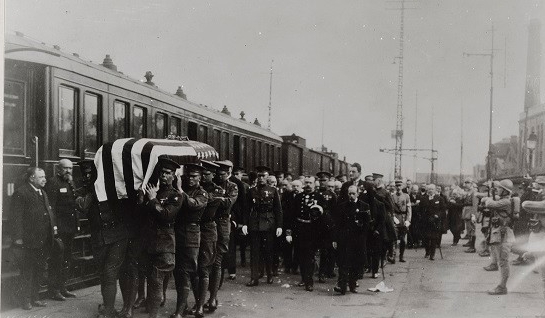 One hundred years ago, an Army sergeant looked over four caskets draped in American flags inside the city hall of Chalons-en-Champagne, France, and chose the U.S. Soldier who would embody the sacrifice of everything, even his name, to a cause greater than himself. On Oct. 23–24, hundreds gathered on the streets of the small French town for a vigil, a military parade, and other ceremonies dedicated to that Soldier and the many others he represents. Attendees included former guards of the Tomb of the Unknown Soldier, Gold Star mothers, veterans, military spouses, and onlookers who, simply by remembering, shared in keeping the legacy of the Unknown Soldier’s selection alive. “It’s a part of our history,” said Benoist Apparu, mayor of Chalons-en-Champagne. “We need to celebrate this for the younger generation, so that they do not forget what happened here.” On Oct. 23, 1921, caskets carrying the remains of unidentified U.S. Soldiers from four different war cemeteries in France arrived in the city, which was then known as Chalons-sur-Marne. The following day, the selection was to be made by an American officer until Maj. Gen. Harry Rogers went off script and decided that a Soldier who possibly served in the same trenches during World War I should make the choice. Sgt. Edward F. Younger of the Army of Occupation on the Rhine had shown up for duty as a pallbearer that day. It fell to him to choose. “Perhaps one of them had fought with me, had befriended me, had possibly shielded me from a bullet that might have put me in his place,” he wrote. “Who would even know?” For more, read the article. For more on The Return of the Unknown Soldier, visit NHHC’s website. 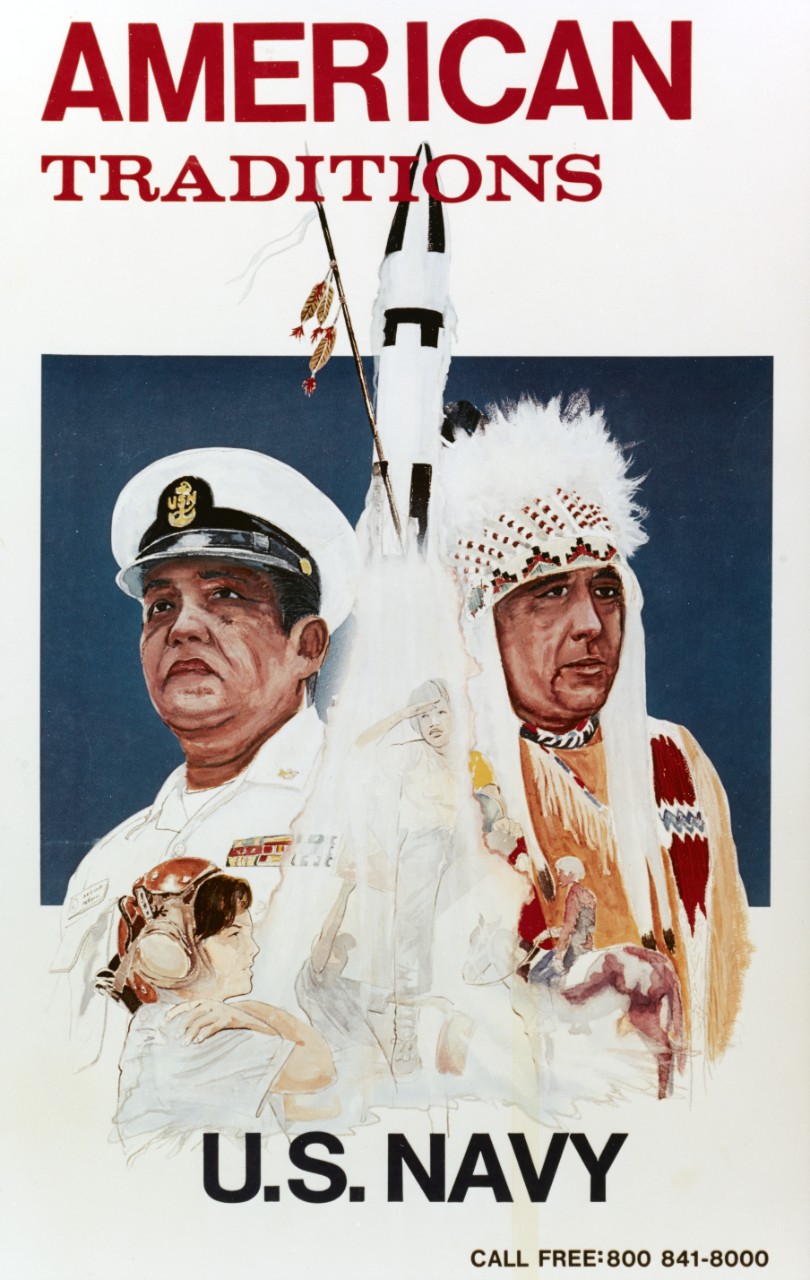 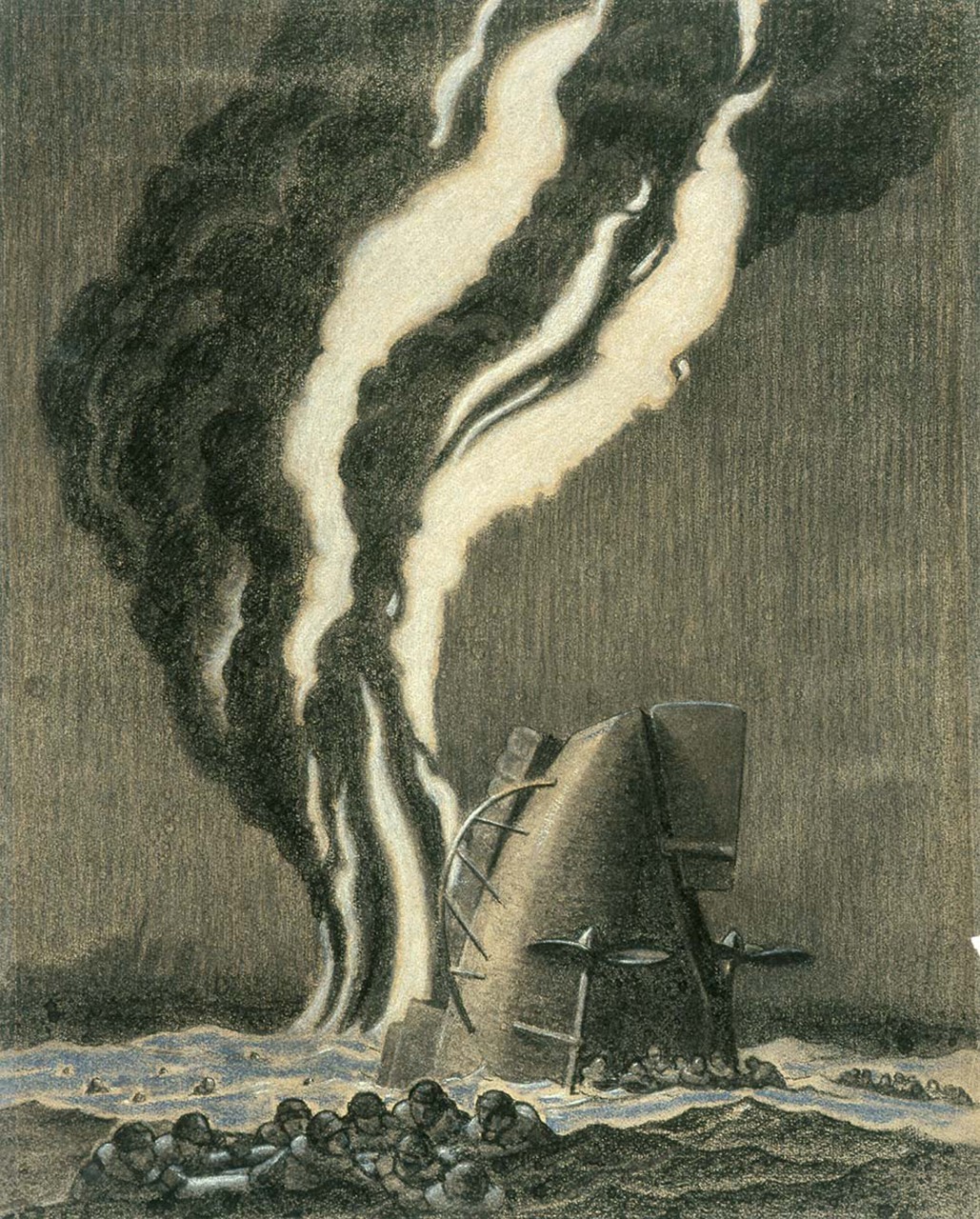 On Oct. 31, 1941, a German submarine sank USS Reuben James as she escorted a convoy, killing 100 enlisted men and all seven of the officers on board, including 35-year old commanding officer Lt. Cmdr. Heywood L. Edwards. Reuben James was the first U.S. ship lost to enemy action in World War II. The U-boat was on her sixth war patrol when she fired two torpedoes that punched into Reuben James’s port side as the destroyer steamed at roughly 8.8 knots. “One or more explosions,” occurred in the vicinity of the forward fireroom, “accompanied by a lurid orange flame and a high column of black smoke visible for several minutes at some miles.” With the forward part of the ship open to the sea, Reuben James began to sink immediately. When apprised of the explosion, Cmdr. Richard E. Webb, the escort commander, contacted each destroyer and discovered that Reuben James was unaccounted for. Webb immediately directed USS Niblack, astern of the convoy, and USS Hilary P. Jones, near the head of the port column, to investigate. Niblack spotted men in the water and began immediate rescue operations. Hilary P. Jones circled to provide protection as Niblack rescued 36 men from the oil-soaked waters. Both destroyers picked up sound contacts dead astern, and Niblack was forced to suspend rescue operations. Hilary P. Jones resumed the rescue work, taking on board 10 more men. Rescue operations were suspended the following day around noon. 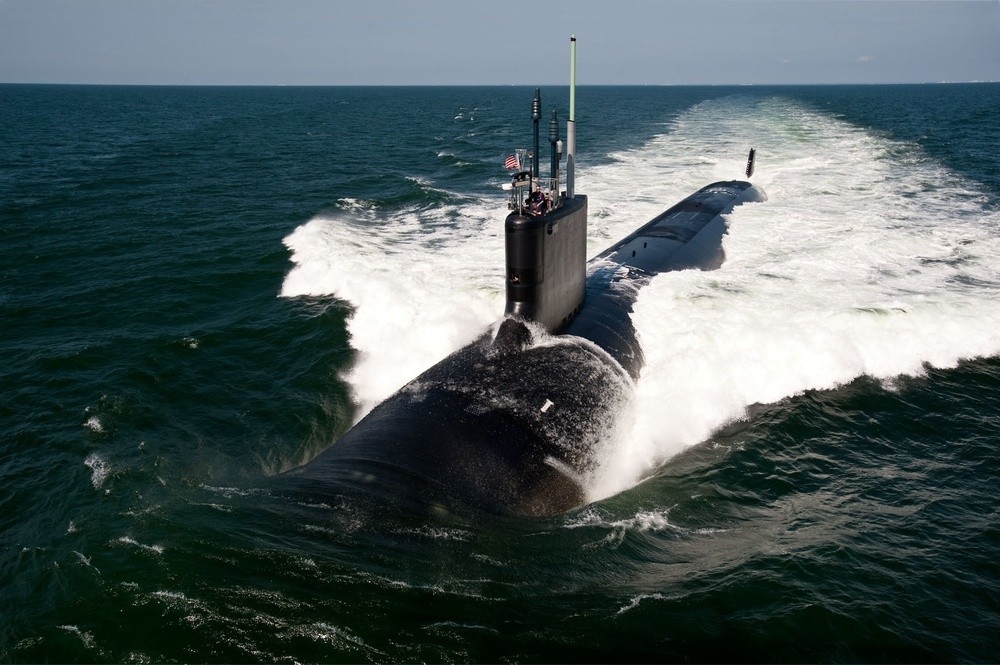 On Oct. 29, 2011, Virginia-class submarine USS California was commissioned at Norfolk, VA. The boat is the seventh U.S. Navy vessel to honor the “Golden State.” Notably, the second California was an armored cruiser that served from 1907–1918. The ship was renamed San Diego in September 1914 to clear the name” California” for assignment to a battleship. On Jan. 21, 1915, an explosion in one of San Diego’s firerooms killed five Sailors and wounded seven more. Ensign Robert W. Cary and Fireman Second Class Telesforo Trinidad were awarded the Medal of Honor for their extraordinary heroism on that day. On July 19, 1918, San Diego hit a mine that was laid by German submarine U-156 off Fire Island, NY, and was subsequently lost. The fifth California was a battleship that served from 1921–1959. She earned seven battle stars for her World War II service. The current California was designed for a broad spectrum of open-ocean and littoral missions. Virginia-class submarines were conceived as a less expensive alternative to the Seawolf-class attack submarines, designed during the Cold War era, and are replacing older Los Angeles-class submarines, 29 of which have already been decommissioned. 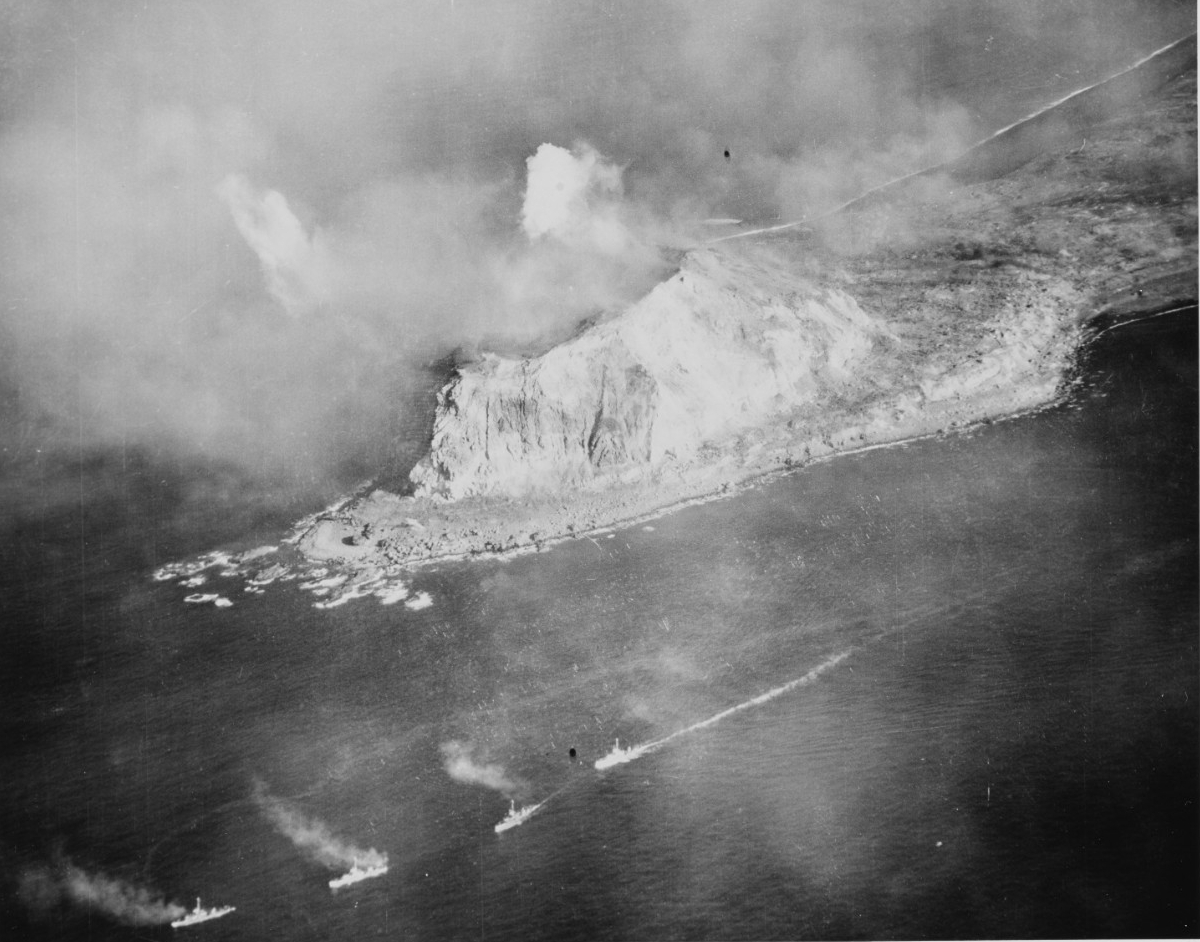 As Iwo Jima Rises, a World War II Harbor Emerges From the Waves

The Battle of Iwo Jima saw some of the fiercest fighting of World War II, and it remains one of the most iconic battles in Navy and Marine Corps history. More than 6,800 U.S. service members were killed and more than 19,000 were wounded. Medals of Honor were awarded to 22 Marines and five Sailors, 14 of them posthumously. The island of Iwo Jima—now a protected memorial site—is still to this day littered with evidence of the battle. Strangely enough, some of the evidence is now rising out of the sea. Iwo Jima is actually the tip of a subsea volcano, and volcanic activity is raising parts of its surface by 10 to 30 inches a year. The shoreline where American Marines stormed the beaches is now far above the high-tide line, and a collection of ghostly wrecks on the shoreline are on their way to becoming high and dry. While the grounded ships may look like they are the remnants of the amphibious assault, they are actually 24 ships and barges the Seabees scuttled to create a rectangular harbor reinforced with sheet pile and fill. The work was completed by April 1945, well after the battle was over and the island was declared secure. However, the harbor didn’t last long, because a typhoon scattered the ships shortly after construction, and the site was abandoned. For more, read the article. 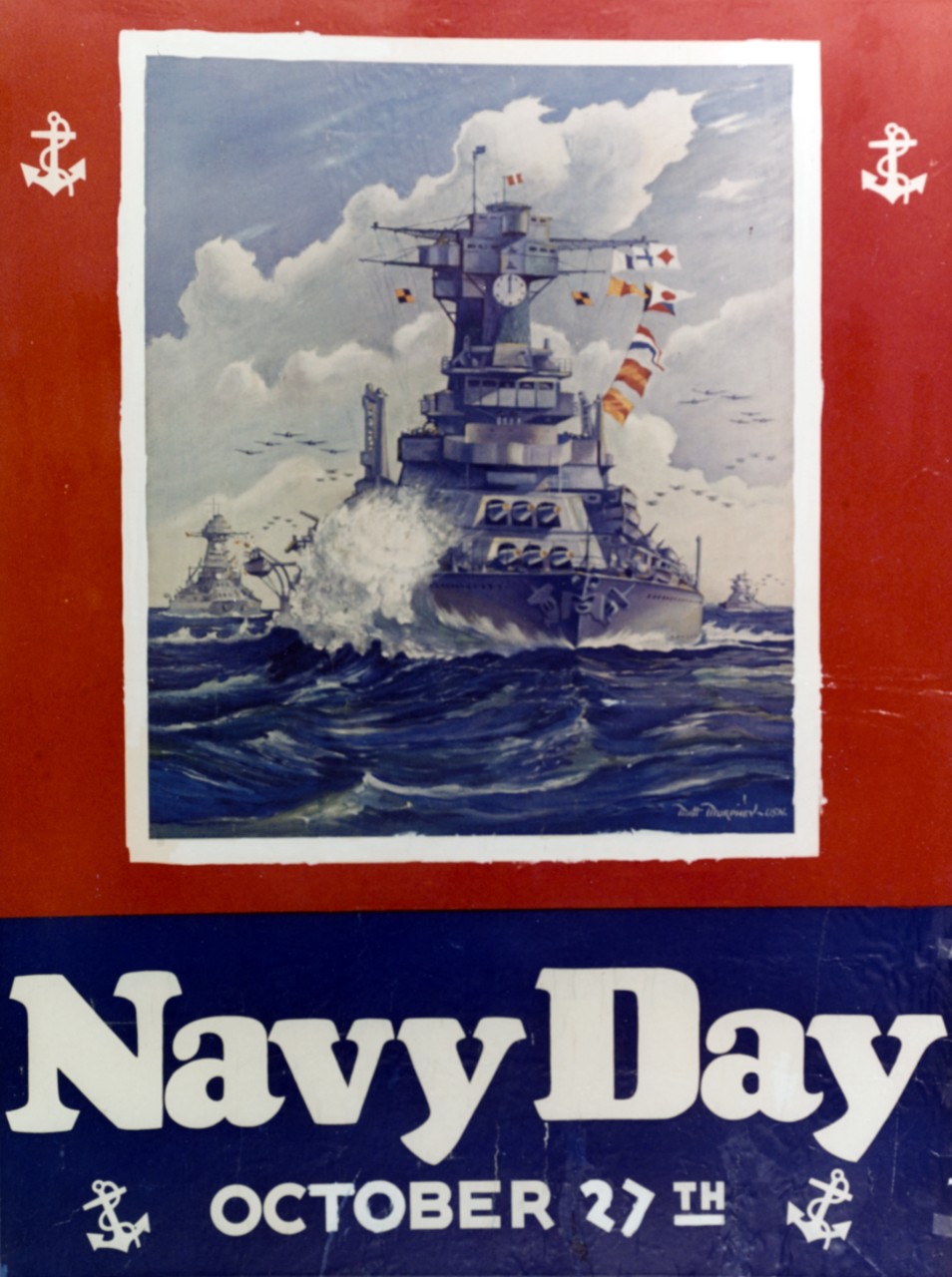 Navy Day was established on Oct. 27, 1922, by the Navy League of the United States. Although it was not a national holiday, Navy Day received special attention from President Warren Harding. Harding wrote to Secretary of the Navy Edwin Denby, “Thank you for your note which brings assurance of the notable success which seems certain to attend the celebration of Navy Day on Friday, Oct. 27, in commemoration of past and present services of the Navy. From our earliest national beginnings the Navy has always been, and deserved to be, an object of special pride to the American people. Its record is indeed one to inspire such sentiments, and I am very sure that such a commemoration as is planned will be a timely reminder.” Oct. 27 was suggested by the Navy League to recognize Theodore Roosevelt's birthday. Roosevelt had been the Assistant Secretary of the Navy and supported a strong Navy as well as the idea of Navy Day. In addition, Oct. 27 was the anniversary of a 1775 report issued by a special committee of the Continental Congress favoring the purchase of merchant ships as the foundation of an American navy. Although some still celebrate, Navy Day was last officially observed on Oct. 27, 1949. 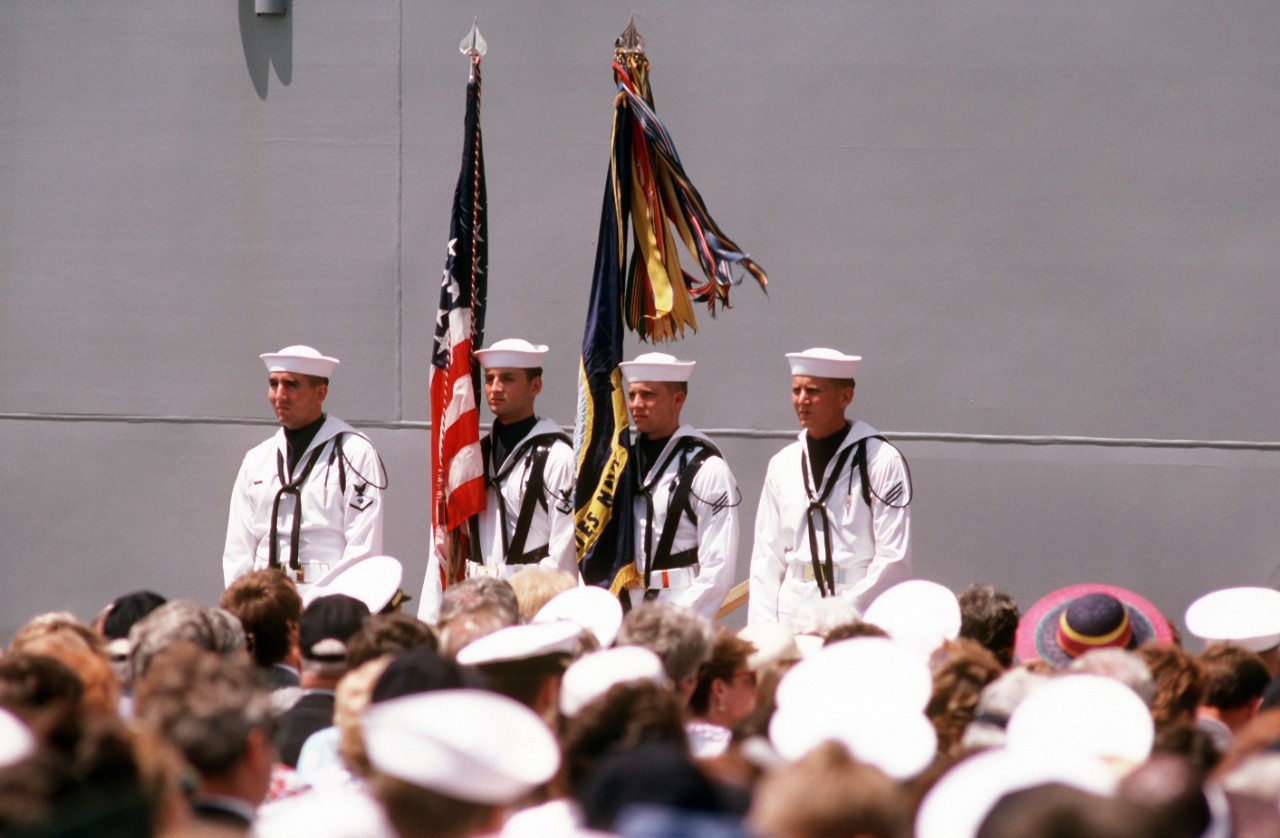 This week’s Webpage of the Week is one that has recently been revamped in NHHC’s Heritage section. To date, 36 Battle Streamers with 30 Silver Stars and 41 Bronze Stars have been approved to commemorate the wars and combat actions of the U.S. Navy during its proud history. These symbolize more than 200 campaigns and major battles and the many unit citations and commendations that have been awarded. Silver and bronze stars are used on streamers to denote engagements of a campaign and numerals on unit award streamers to denote the total number awarded. For more, check out the page today. It contains the significance of the Battle Streamers on the U.S. Navy flag for all U.S. Navy engagements from the American Revolution to Operation Enduring Freedom, to include entries for the Presidential Unit Citation, the Navy Unit Commendation, and the Joint Meritorious Unit and Meritorious Unit Commendations. 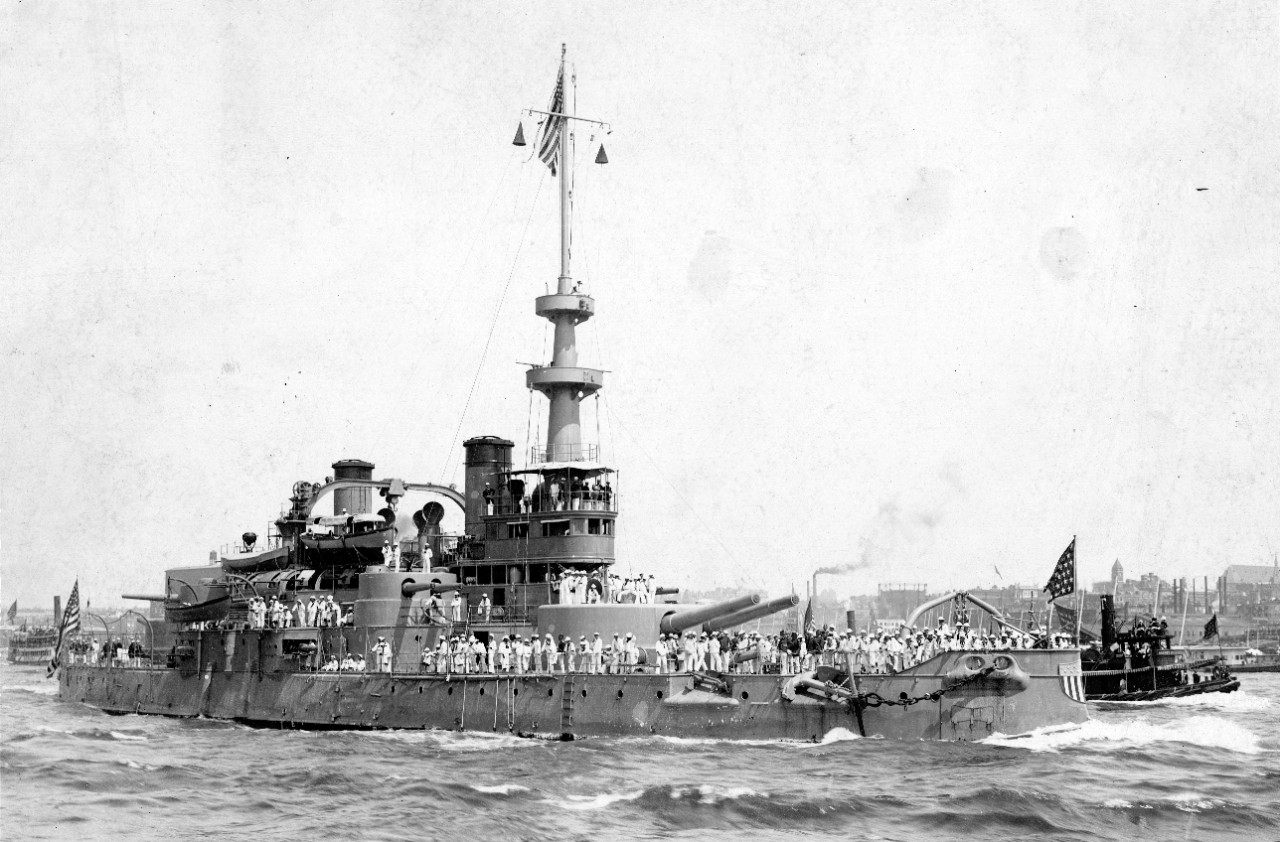 On Oct. 26, 1893, battleship Oregon was launched at San Francisco. She was later commissioned on July 15, 1896, with Capt. Henry L. Howison in command. At that time, she was the only battleship serving on the U.S. Pacific seaboard. As the Spanish-American War approached, she was ordered to steam around South America to strengthen the forces available in the Atlantic. Upon arrival, Oregon served off Cuba, and had an important role in the Battle of Santiago on July 3, 1898. In late 1898, Oregon went to the Far East for the first of two tours of duty there that lasted until 1906, when she returned to the U.S. West Coast. From 1906 until 1917, she had occasional periods of active service in the eastern Pacific. During World War I, she guarded the Pacific coast and escorted a troop convoy to Siberia. Decommissioned in 1919, Oregon was loaned to the State of Oregon as a museum ship in 1925 and was later reclassified IX-22. World War II caused her to be sacrificed for the scrap steel effort, but her hull was retained as an ammunition barge and towed to Guam in 1944.