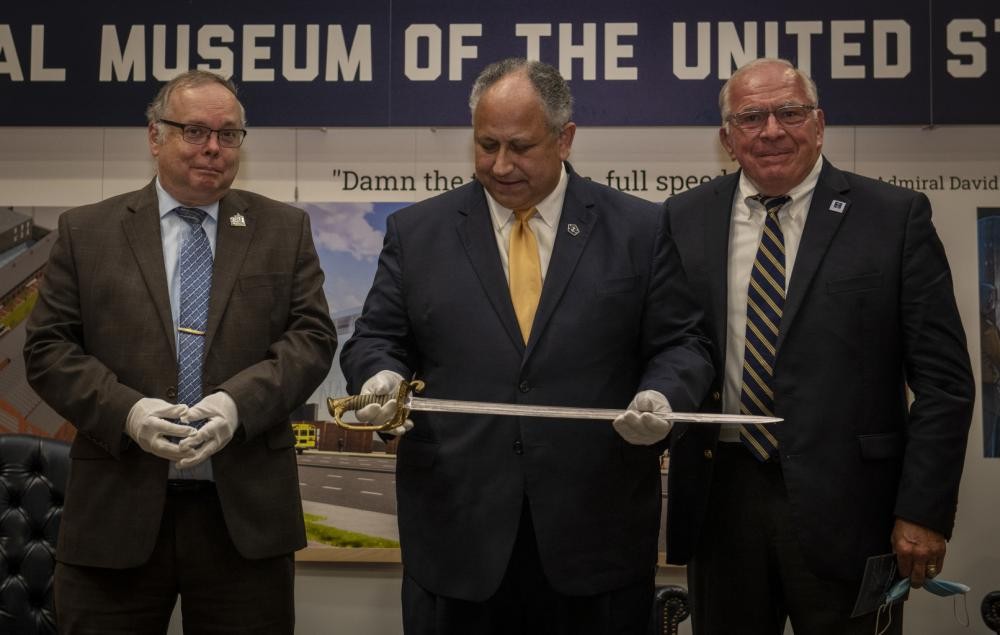 As the Navy celebrated yet another birthday milestone Oct. 13, 2021, it was not only an opportunity for Sailors to dress up in their service dress blue uniforms and eat delicious cake, but more importantly, a chance to look back on its great historical lineage and influential leaders.

During Secretary of the Navy (SECNAV) Carlos Del Toro’s first official visit to the National Museum of the U.S. Navy (NMUSN) since assuming the position as SECNAV, Naval History and Heritage Command (NHHC) presented him with the official sword of Adm. David Glasgow Farragut for display in his office at the Pentagon. 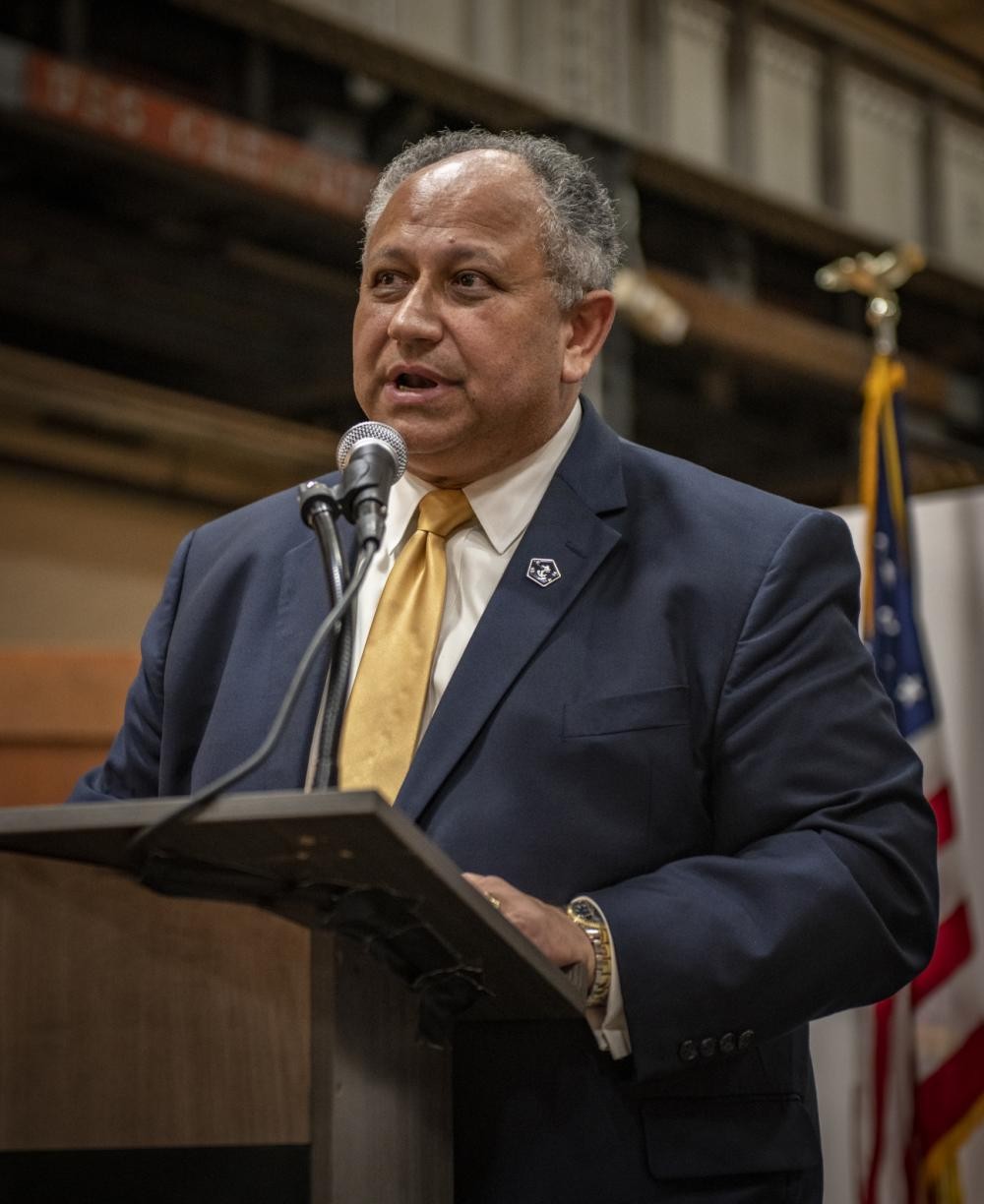 Secretary of the Navy Carlos Del Toro speaks to audience members at the National Museum of the U.S. Navy (NMUSN) during a ceremony celebrating the Navy’s 246th birthday. During the ceremony, Del Toro thanked the Navy Museum Development Foundation for its kind offer to lead a national campaign to raise funds for the future NMUSN. (U.S. Navy photo by Mass Communication Specialist 2nd Class Ellen Sharkey)

“I am deeply honored to have Adm. Farragut’s sword in my office for all our visitors to see,” said Del Toro. “I think it will exemplify the spirit that resides in the Secretary of the Navy’s office.”

The sword came from the estate of Loyall Farragut, the son of Admiral Farragut, and contains important markings on the front and back. 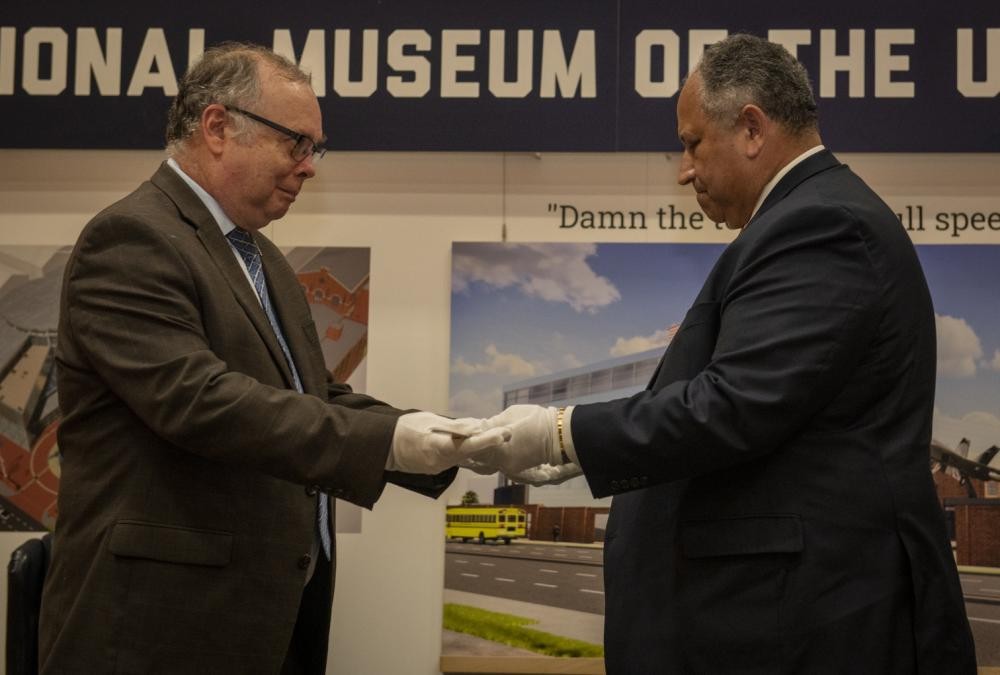 Born in Knoxville, Tennessee July 5, 1801, Farragut gave 59 years of naval service from 1810 to 1869. Starting his career off as a midshipman, he climbed the naval ranks serving initially as executive officer on various ships before being called upon to command. At the outbreak of the Civil War, he was called to choose between his native state and the federal government. Two years after declaring his allegiance to the Union, he experienced his most brilliant victory during the Battle of Mobile Bay on Aug. 5, 1864, when he captured two Confederate ships and was quoted saying, “Damn the Torpedoes! Four Bells! Go ahead! Full speed!” Sometime later his quote was abridged to the more commonly used, “Damn the torpedoes! Full speed ahead!”

Along with the Farragut sword, NHHC has a wide variety of artifacts from the Navy’s history in its collection. The command also has a loan program, organized by NHHC’s Curator Branch, which identifies which artifacts would be appropriate to loan out to certain individuals or organizations.

“We were informed that the Secretary of the Navy has a particular interest in Farragut,” said Stephanie Loden, Associate Registrar for Loans at NHHC. “Command leadership felt presenting the sword to SECNAV at this event was appropriate as part of the Navy’s birthday celebrations, connecting past and present.”

During the ceremony, Del Toro also thanked the Navy Museum Development Foundation for its kind offer to lead a national campaign to raise funds for the future NMUSN. The Navy is working towards a milestone construction event for the new museum by October 2025.

Naval History and Heritage Command will continue to connect the public to Navy history as its Curator Branch works to lend important artifacts for study, exhibition, and research, just like the one presented to Del Toro.

NHHC, located at the Washington Navy Yard, is responsible for the preservation, analysis, and dissemination of U.S. naval history and heritage. It provides the knowledge foundation for the Navy by maintaining historically relevant resources and products that reflect the Navy's unique and enduring contributions through our nation's history, and supports the fleet by assisting with and delivering professional research, analysis and interpretive services. NHHC is composed of many activities including the Navy Department Library, the Navy Operational Archives, the Navy art and artifact collections, underwater archeology, Navy histories, 10 museums, USS Constitution repair facility and the historic ship Nautilus. 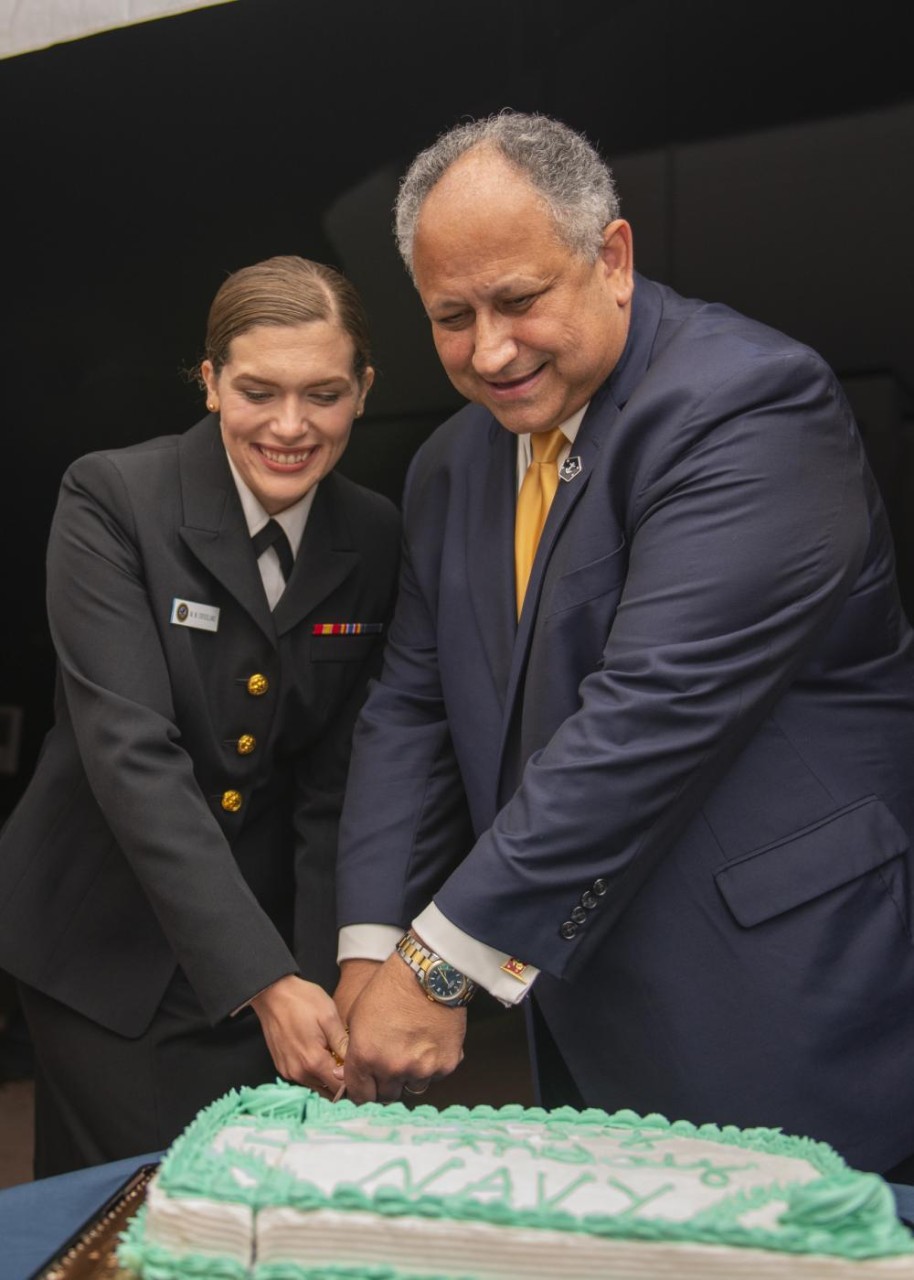