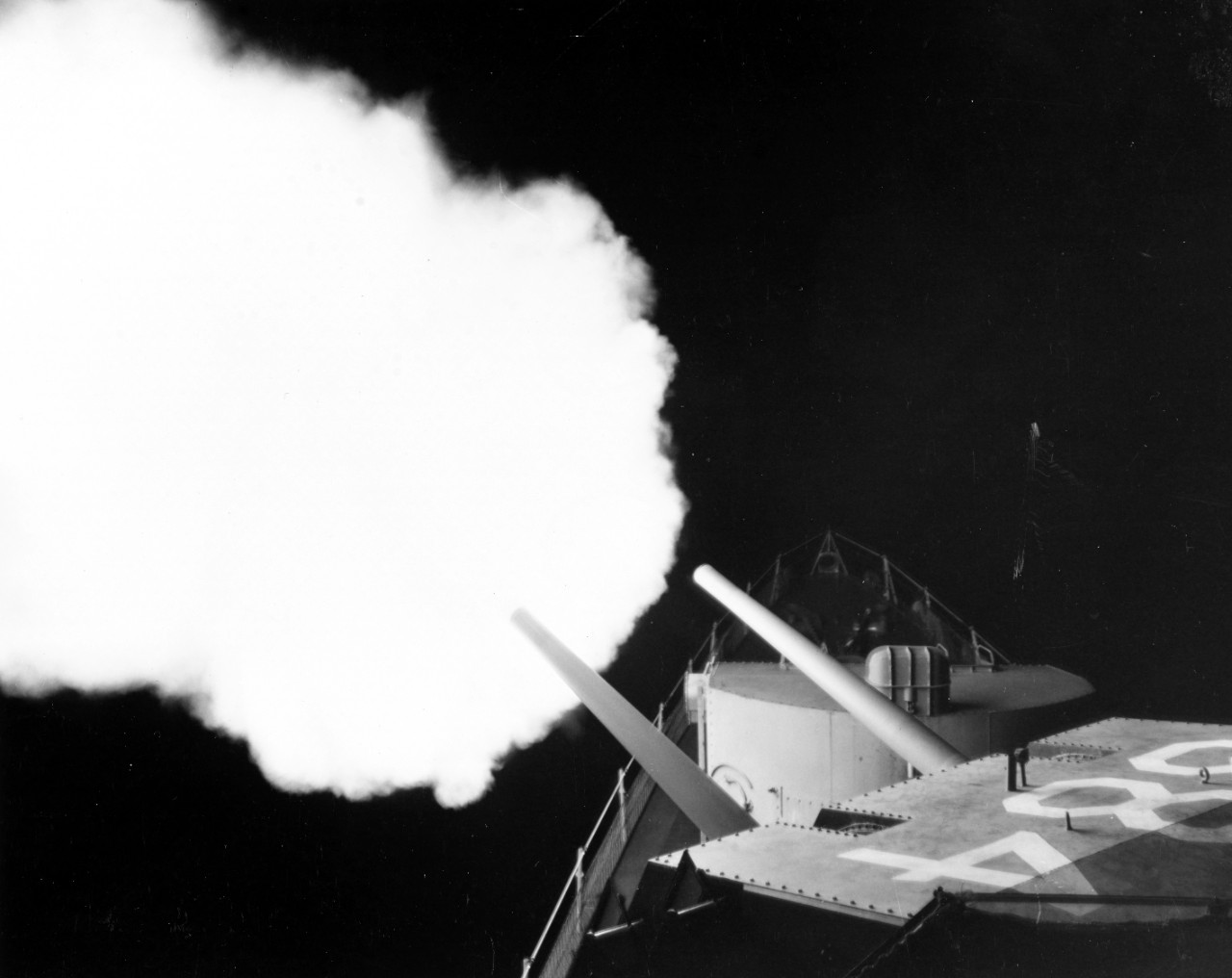 Siege of Wonsan Begins—70 Years Ago

On Feb. 16, 1951, the Siege of Wonsan commenced. It lasted until the Korean War armistice, which ended the fighting in 1953. The naval blockade of the North Korean port was, at the time, the largest in modern history. Mainly a U.S. Navy effort, the operation was regularly supplemented by the British navy. The goal of the siege was to prohibit enemy resupply through the port, keep Communist forces off-balance, and defend the islands in the harbor. In addition to frequent minesweeping, UN ships regularly bombed roads, rail, and artillery positions. Numerous U.S. ships were hit by enemy shore battery fire over the course of the operation, but none were ever sunk. On Feb. 19, 1951, destroyer USS Ozbourn suffered two direct hits and several near misses from enemy shore batteries. Despite the damage, Ozbourn remained on the firing line. At one point, she sent one of the ship’s boats 14 miles into a minefield to rescue a downed naval aviator from carrier USS Valley Forge. For more on the continuing coverage of the 70th anniversary of the Korean War, read H-Gram 058-2 at the Director’s Corner. 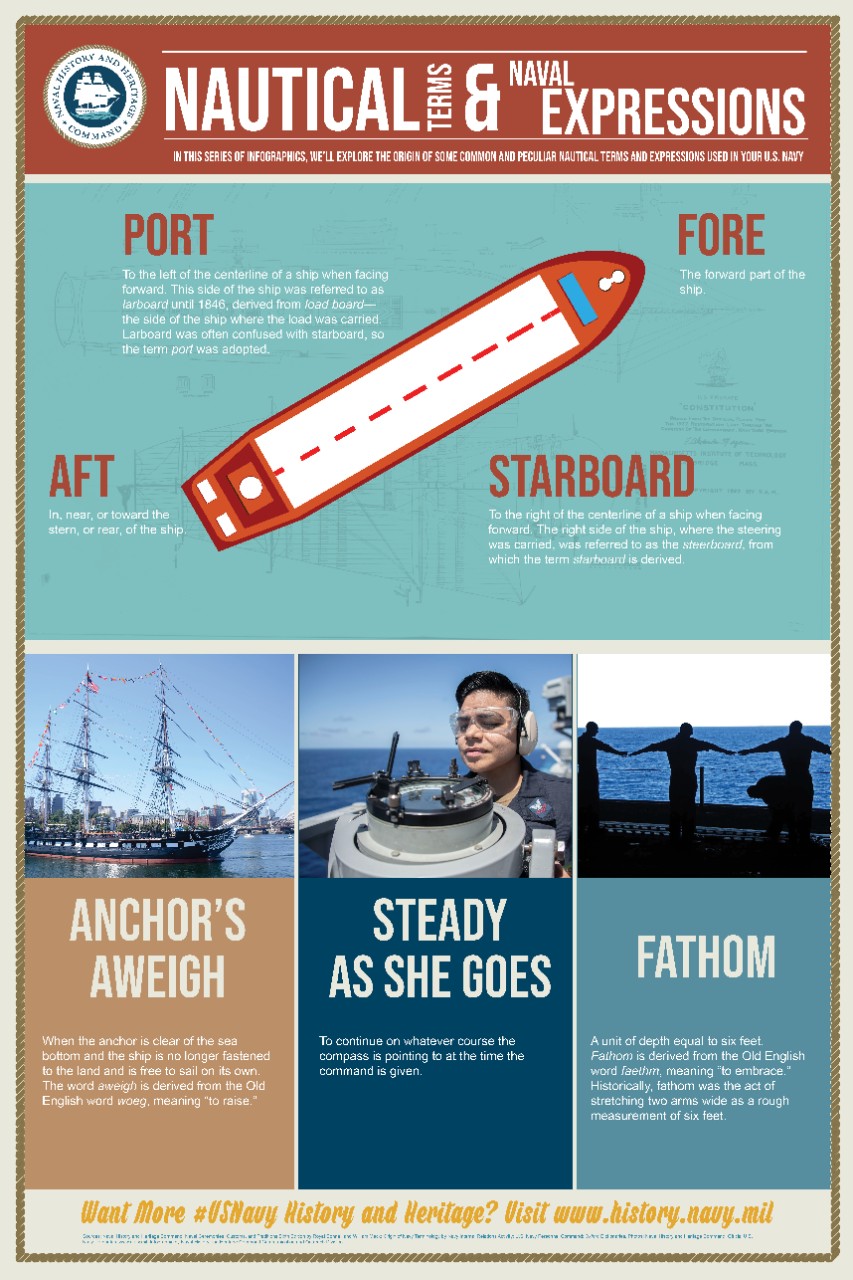 “Port” Identified as Left Side of Vessel—175 Years Ago

On Feb. 18, 1846, Secretary of the Navy George Bancroft issued the general order to change “larboard” to “port” for identification of the left side of a sailing vessel. According to the order, “It having been repeatedly represented to the Department, that confusion arises from the use of the words ‘larboard’ and ‘starboard,’ in consequence of the similarity of sound, the word ‘port’ is hereafter to be substituted for ‘larboard.’’’ Larboard was derived from the term load board, because ships were loaded from that side. With the noise of the wind and the waves, it is critical for Sailors to know which side of the ship is referred to as left and which is right. Confusing larboard and starboard could cause a serious injury or damage to the ship, so the term port was adopted. For more seamanship terms and expressions, read the blog at The Sextant. 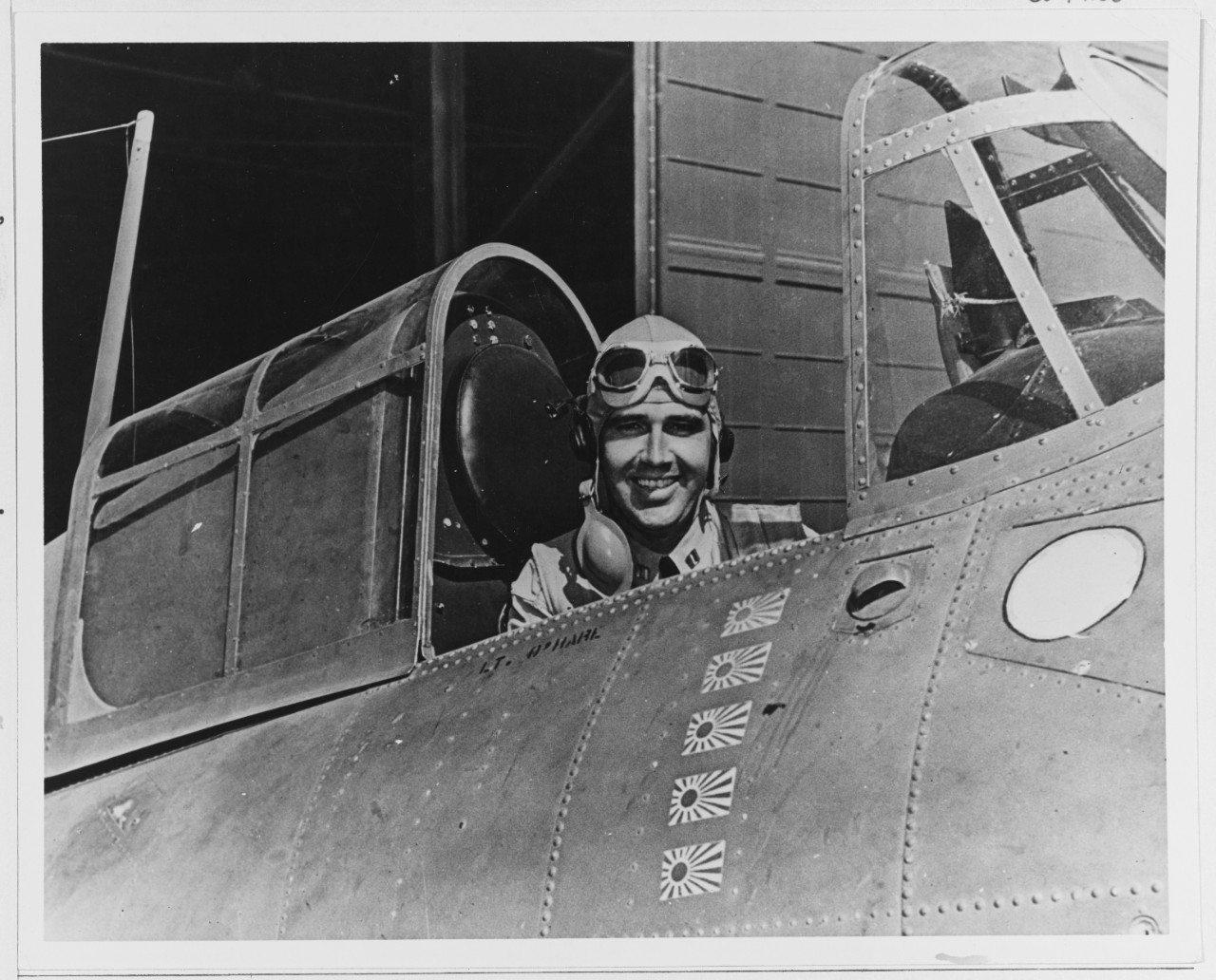 Less than three months after the Japanese attack on Pearl Harbor, Americans were in desperate need of good news. On Feb. 20, 1942, in the cockpit of an F4F Wildcat of Fighting Squadron (VF) 3, Lt. Edward H. “Butch” O’Hare provided the nation a much needed morale boost in the skies off Rabaul. With his wingman forced to return to USS Lexington when his aircraft experienced mechanical problems, O’Hare was left to fight an incoming attack of Japanese G4M bombers. During the engagement, he was credited with shooting down five and damaging a sixth enemy aircraft in defense of Lexington. In April 1942, O’Hare was meritoriously promoted to lieutenant commander and received the Medal of Honor—presented to him by President Franklin D. Roosevelt. O’Hare was killed in action in November 1943 over the Gilbert Islands. O’Hare International Airport in Chicago is named in his honor. For more on naval aviation, go to NHHC’s website. 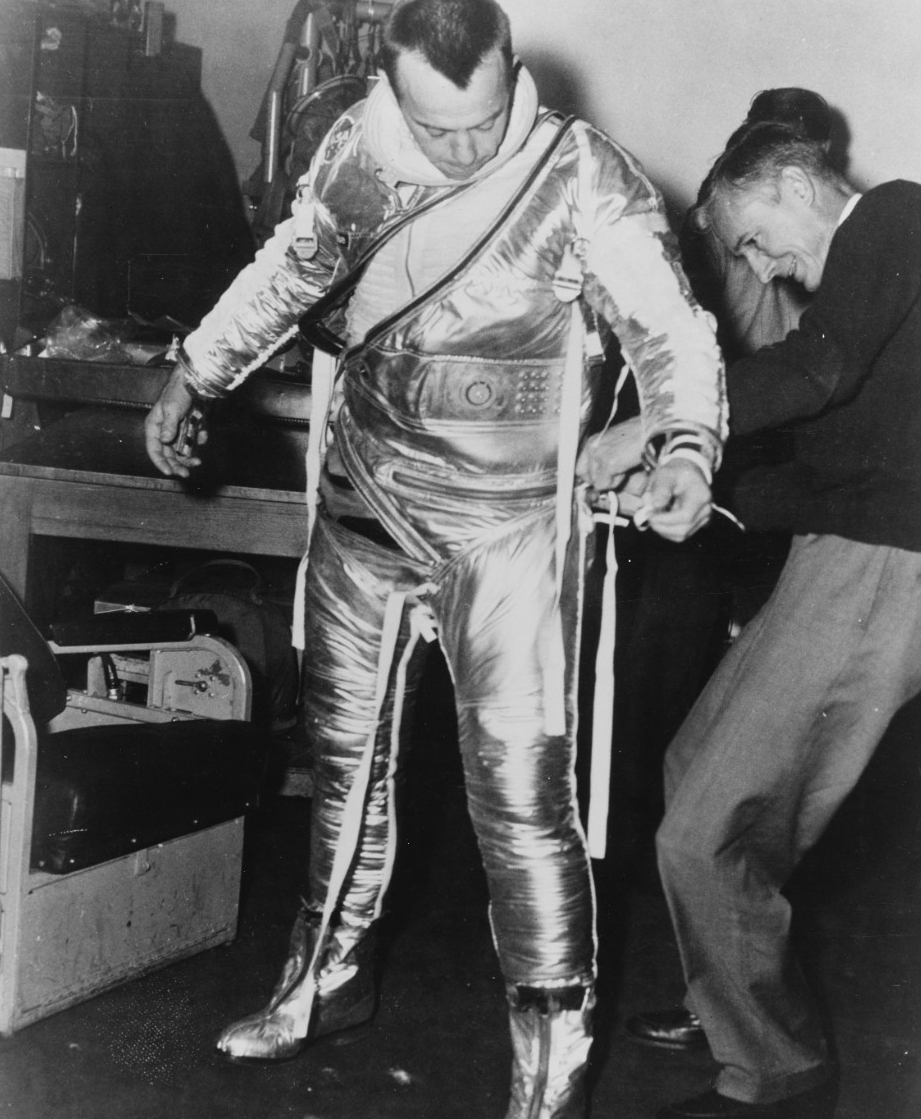 He Was the Fifth Man on the Moon, But That Wasn’t His Most Famous Flight

Of the original astronauts chosen by NASA in 1959, only one actually walked on the moon. However, he almost did not make the trip. More than two years after his pioneering Mercury-Redstone flight in May 1961, Navy Cmdr. Alan B. Shepard Jr. developed an obscure inner ear condition that knocked him off flight status for nearly six years. Although he still worked at NASA, he was given a desk job running the astronaut office. For a man of Shepard’s ambitions, it was pure purgatory. Although all the astronauts were competitive, they viewed space travel differently. Some viewed it as exploration, while others, saw it as the world’s greatest flight-test program. Shepard, like his colleague Neil Armstrong, leaned more towards the latter camp. His groundbreaking Mercury flight was all business. There was no enthusiastic “Let’s Go”—just the simple “Lift off and the clock has started.” NASA and Shepard prided themselves that the American astronaut had manual control of his spacecraft on the first U.S. manned flight, unlike the Soviet cosmonaut, who was just along for the ride on a machine. For more, read the article. For more on the Navy’s role in space exploration, go to NHHC’s website. 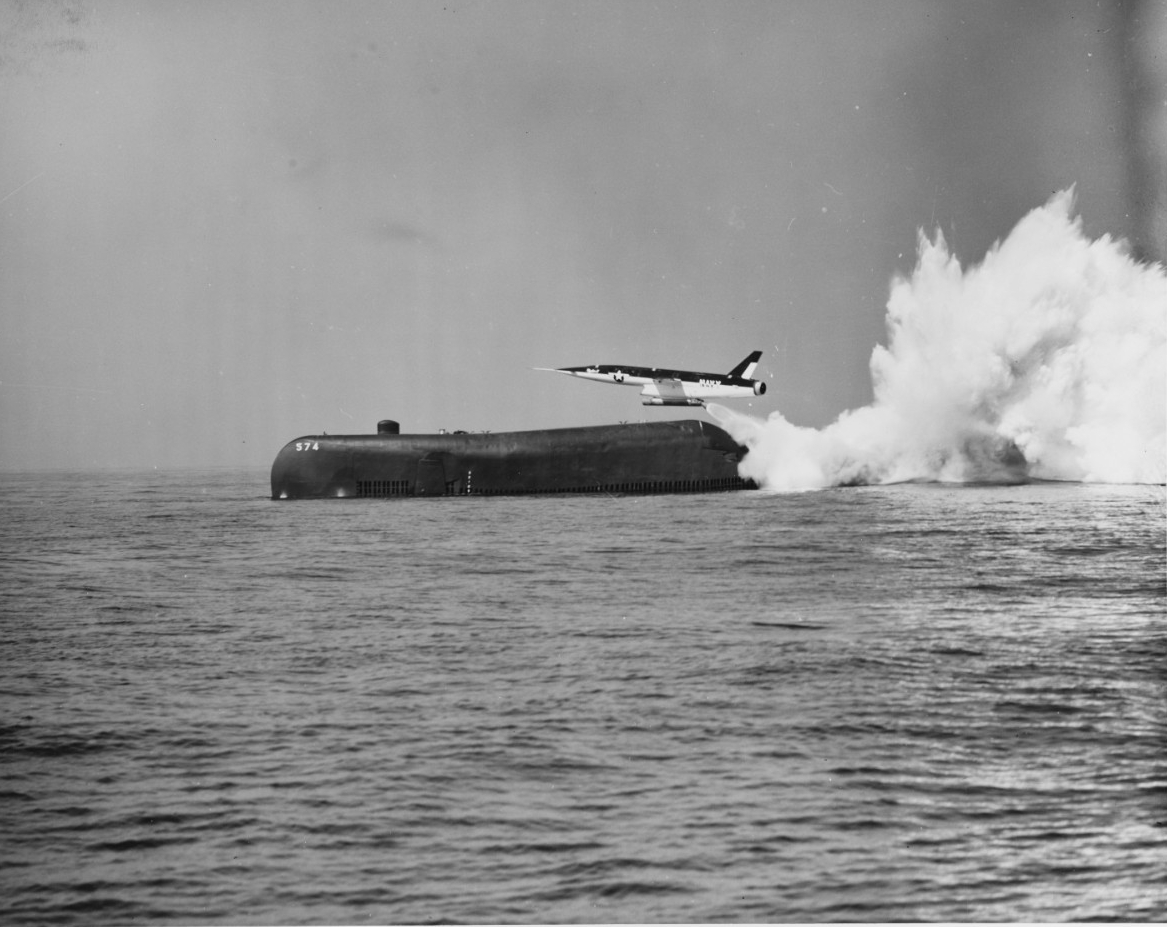 Few post-World War II Navy submarines had such an unusual career as USS Grayback. The boat went from carrying the first strategic missiles of the United States to inserting naval special warfare personnel during the Vietnam War. Grayback was a fascinating, yet bizarrely shaped submarine whose multiple lives changed as world events unfolded. Launched on July 2, 1957, and commissioned on March 7, 1958, Grayback was the first Navy guided-missile submarines to carry the Regulus II sea-to-surface missiles. While operating out of Port Hueneme, CA, in September 1958, she carried out the first successful launching of the sea-to-surface missile from a submarine, which pointed the way to revolutionary advancements in the power to attack land bases. She served in the strategic missile role until the boat was decommissioned in May 1964. In 1967, Grayback was given new life when she began conversion to accommodate six swimmer delivery vehicles and a diver’s decompression chamber. For more, read the article. For more on the submarine force, go to NHHC’s website. 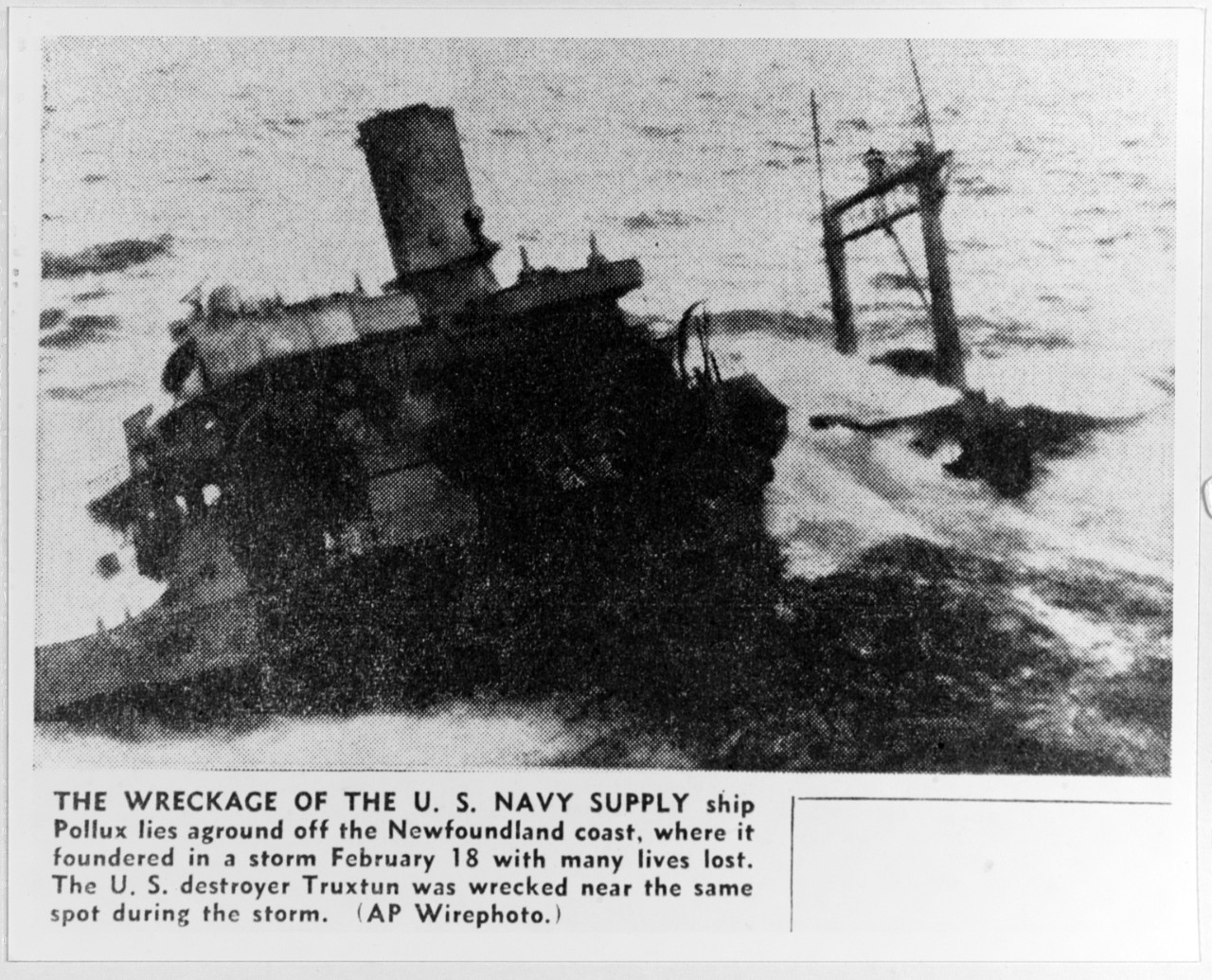 On Feb. 18, 1942, USS Truxtun and USS Pollux were sunk during a heavy storm off St. Lawrence Harbor, Newfoundland—at Chambers Cove and Laun’s Point respectively—with the loss of more than 200 lives. Heroic efforts to haul lines ashore failed due to the inability to handle them when they became oil-soaked. Some of the crew attempted to swim ashore, many unsuccessfully. Finally, lines with a boatswain’s chair were rigged to a ledge, and the remaining personnel were convoyed ashore. Truxtun broke up almost immediately after grounding, and soon after Pollux did as well. The more than 180 survivors owed their rescue in large part to the tireless, and in many cases, heroic actions of the people of St. Lawrence. For more weather-related incidents, go to NHHC’s website. 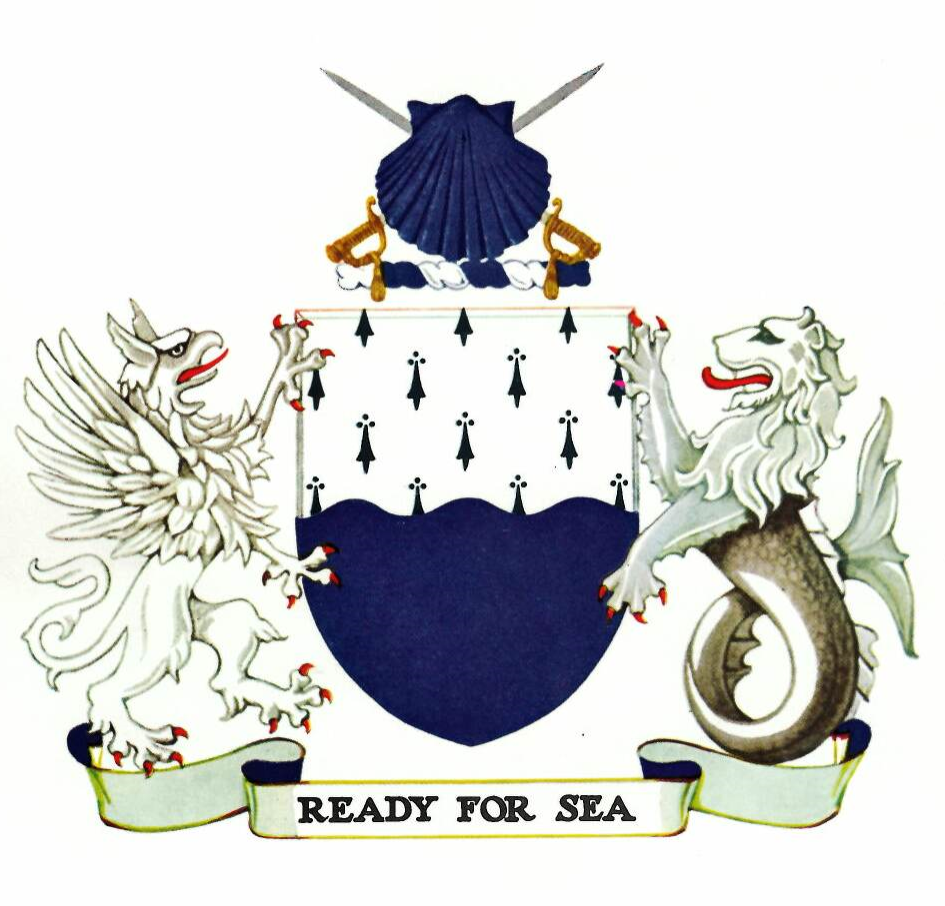 The U.S. Navy Supply Corps traces its history to February 1795, when Philadelphia businessman Tench Francis Jr. became the first Purveyor of Public Supplies, overseeing Navy purchasing. One of his initial tasks was to ensure timbers and supplies were available for the construction of six new frigates authorized by the Naval Act of 1794. Since that time, many men and women have taken on the role of making sure the Navy gets what it needs, including not just Supply Corps officers, but Sailors in the enlisted supply community and civilians. Today, there are more than 3,300 Active and Reserve component naval officers—from warrant to flag officer—who proudly wear the oak leaf identifying them as leaders in the world’s preeminent naval logistics force. Supply Corps officers serve on nearly every afloat platform, in almost every expeditionary environment, and at hundreds of shore installations worldwide. One third of Supply Corps officers serve in operational assignments, making them the most operational of all Navy staff corps. For more, check out the Supply Corps page at NHHC’s website.

Recently, future destroyer USS Daniel Inouye successfully completed acceptance trials after spending four days off the coast of Maine. During the trial voyage, the ship was inspected during a series of demonstrations both at pier and underway. “Following an outstanding Combined Alpha and Bravo trials this past December, DDG-118 performed superbly during the ship’s acceptance trial earlier this week,” said Capt. Seth Miller, DDG-51 class program manager, PEO-Ships. “The Navy and industry team are ready to deliver a highly capable multi-mission warship to the fleet within the next few weeks.” The ship is named to honor late Senator Daniel Inouye, who received the Medal of Honor for combat heroism during World War II as a second lieutenant in the U.S. Army. On April 21, 1945, near San Terenzo, Italy, Inouye skillfully led his platoon through a hail of automatic weapon and small arms fire resulting in the capture of an enemy artillery and mortar post. He received the nation’s highest honor on June 21, 2000, for “extraordinary heroism and devotion to duty.” For more, read the article. 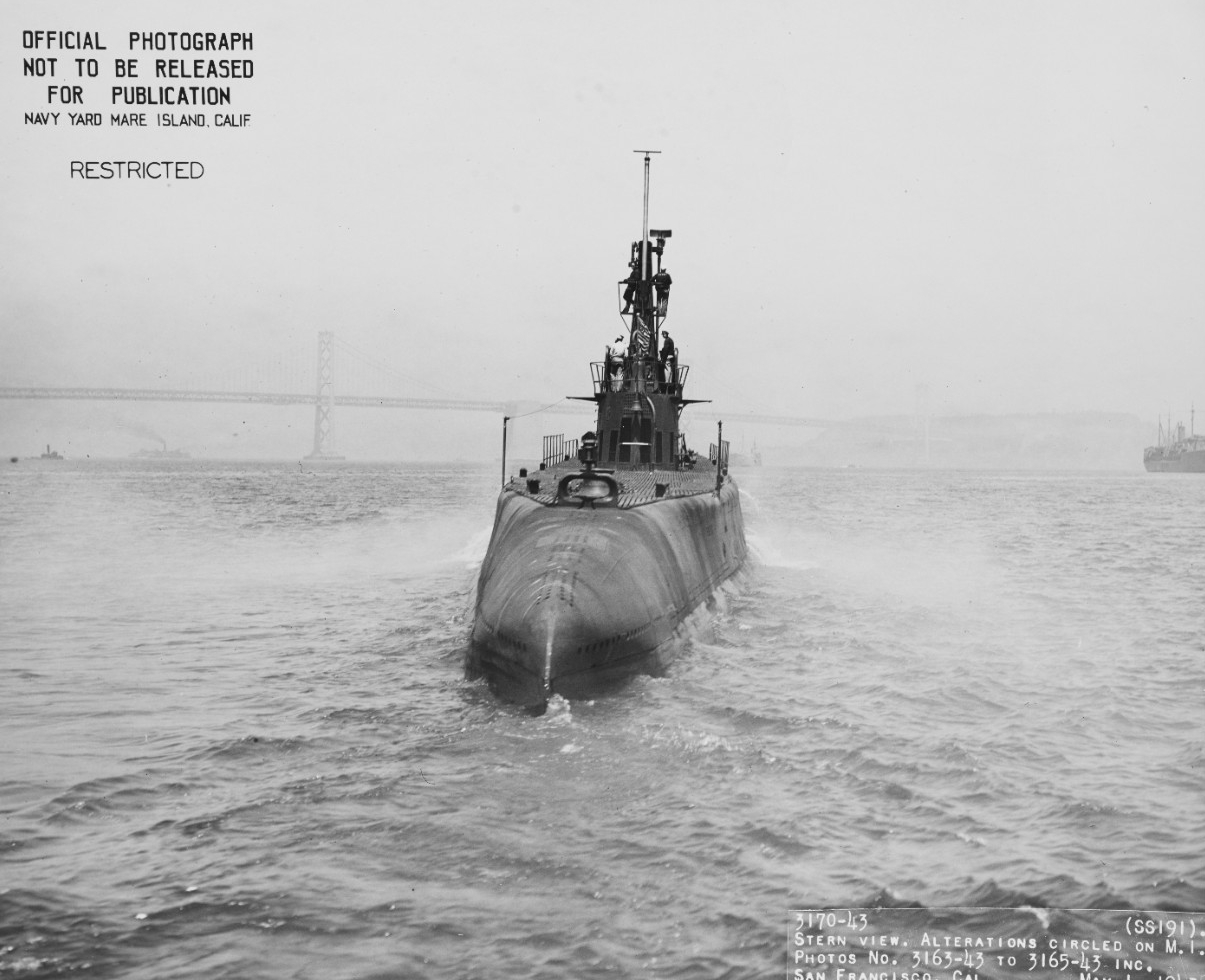 This week’s webpage of the week is new to NHHC’s notable ships. USS Sculpin was commissioned on Jan. 16, 1939, and while on her initial shakedown cruise, was diverted to assist in the search for submarine Squalus. On May 23 during a test dive off the Isle of Shoals, Squalus suffered a catastrophic valve failure that sent her to the ocean’s floor about 240 feet below the surface. Sculpin provided support and communication during the 13-hour operation that successfully rescued 33 survivors. In 1943, following a brief overhaul at Pearl Harbor, Sculpin departed on her ninth war patrol in the waters north of Truk, where she was to intercept and attack Japanese ships departing for the upcoming invasion of Tarawa in the Gilbert Islands. Sculpin and two other submarines were to form “wolfpacks” in an effort to conduct coordinated attacks on the Japanese. Capt. John P. Cromwell was onboard Sculpin to coordinate the attacks. After refueling at Johnston Island, Cromwell was ordered to commence the attacks on Nov. 29. After the submarine failed to acknowledge receipt of the orders, the message was repeated 48 hours later. The submarine was presumed lost about a month later. For more on the fate of Sculpin, check out the page today. It provides a short history, suggested reading, biographies, and selected imagery. 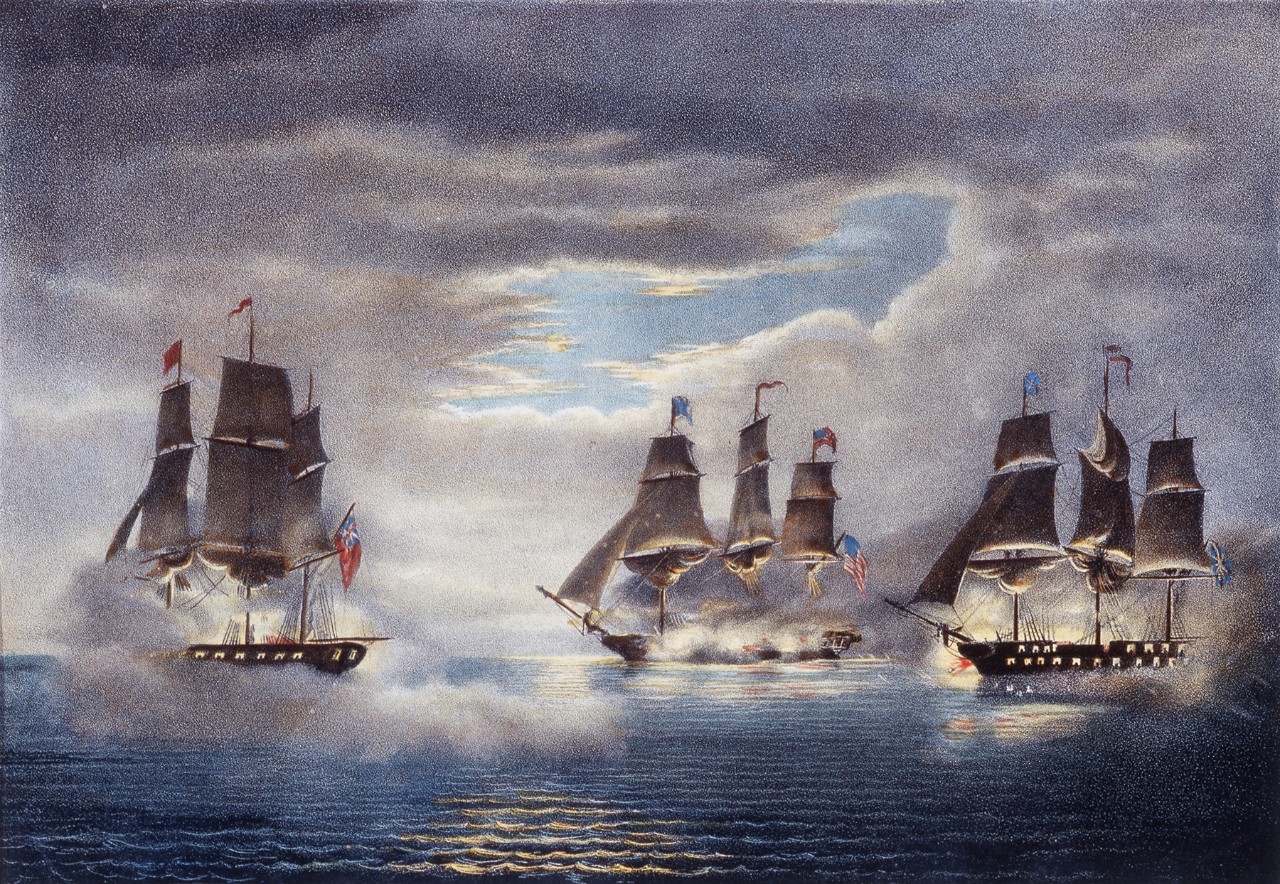 On Feb. 16, 1815, the frigate Constitution captured British ship Susannah, despite the War of 1812 ending weeks earlier. Four days later, she gave close chase to the frigate Cyane and the sloop Levant bound for the West Indies. Constitution opened the action firing her broadsides. As the British ships drew apart, Constitution maneuvered between the two, fighting each separately. In less than an hour, Cyane struck her colors and soon thereafter Levant surrendered. While enroute to New York, “Old Ironsides” received confirmation of the ratification of peace terms, and on May 15, arrived back in the United States. News of the Treaty of Ghent took almost two months to cross the Atlantic.