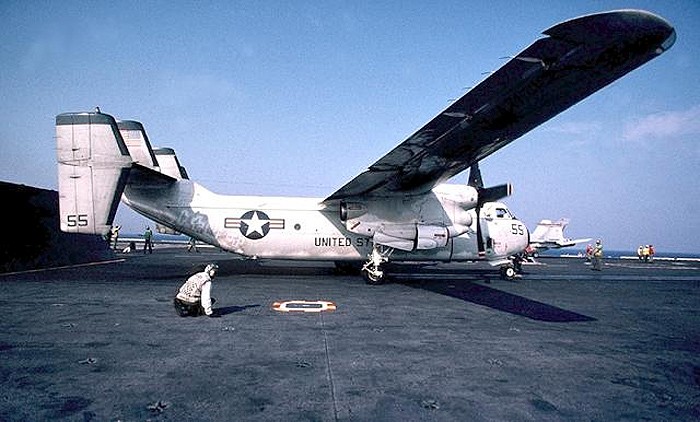 The Navy "reprocured" the Grumman C-2A Greyhound aircraft used to carry cargo and passengers out to aircraft carriers. Nineteen were bought in the late sixties to replace the aging C-l in the "carrier onboard delivery", or "COD", role. In the 1980s the Navy bought 39 more, and the first to receive the reprocured C-2As was Fleet Logistics Support Squadron Twenty-four (VR-24), home ported at Naval Air Station Sigonella, Sicily.

Both new and old aircraft are classified as C-2As, but the new planes are better in nearly every way. They fly faster, farther, and carry heavier loads. They're safer, more comfortable, break down less often and, when they do, they are easier to fix.

The new C-2A aircraft replaced the old C-2As, referred to as "SLEPs" because they've received "service life extension program" modifications. The single most important improvement of the new C-2As is the more powerful engine, a third more horsepower than the old engine. It also has improved navigation and communications equipment. The plane is quieter inside, and has a public address system to better prepare the passengers for an arrested landing or catapult shot on a carrier. Other improvements include a three-color weather radar, an automatic carrier landing system (ACLS) and a 25% increase in payload capacity.

The improvements in the C-2A increased the flight time between failures and cut maintenance man-hours in half. With all the changes, it is still a C-2 (its basic airframe is the same as the E-2C Hawkeye), and uses components common to aircraft presently in the fleet so the new planes easily fit into fleet operations and maintenance routines.

Since the introduction of the new C-2A in the 1980s there have been continued improvements and modifications for this aircraft. The installation of the Global Positioning System and Carrier Aircraft Inertial Navigation System have been completed or are planned in the very near future. The Greyhound continues to provide Carrier Onboard Delivery service between shore bases and carriers.