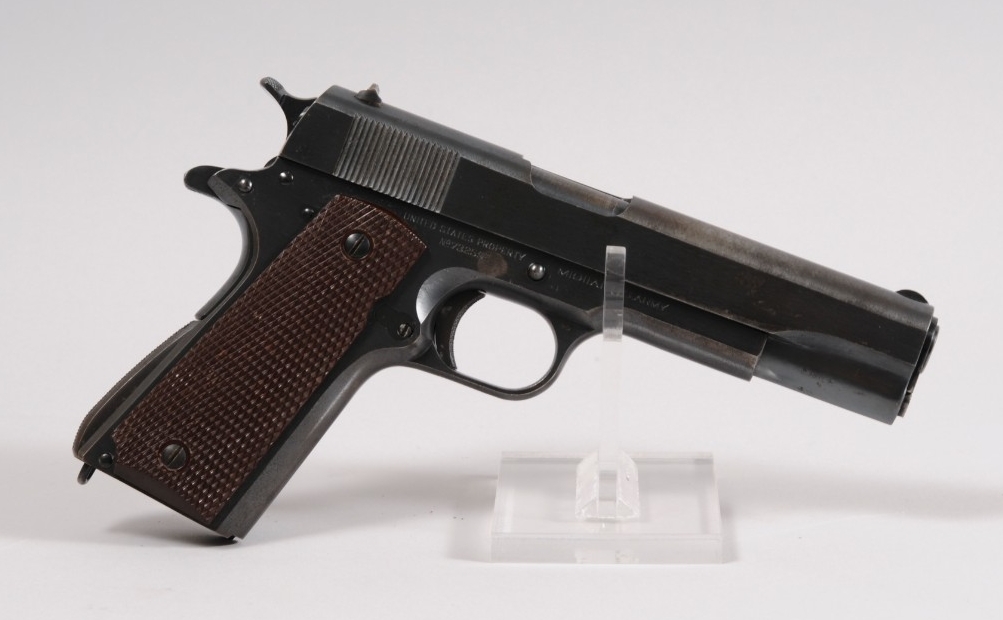 M1911A1 Pistol and accoutrements from Captain Victor Antoine Moitoret. The M1911A1 Pistol is recoil-operated and semi-automatic, fed from a 7-round detachable box magazine contained in the grip. Fixed front and rear sights are mounted to the top of the full-length slide, which completely encloses the barrel. The pistol has a spur hammer and a frame spur to protect the firer’s hand from “hammer bite.” A grip safety is at the rear and a frame safety on the left side at the rear, behind the slide stop lever. The magazine catch release is also on the left, behind the trigger. The pistol is phosphate coated and has checkered brown plastic grips held on by two screws on each side. The obverse frame is marked "United States Property/No 732591" and "M1911A1 US Army." The reverse frame is marked "Patented Apr 20, 1897. Sept 9, 1902/Dec. 19, 1905. Feb. 14, 1911. Aug. 1___" and "Colt's PT. F.A. Mfg. Co./Hartford, CT. U.S.A." 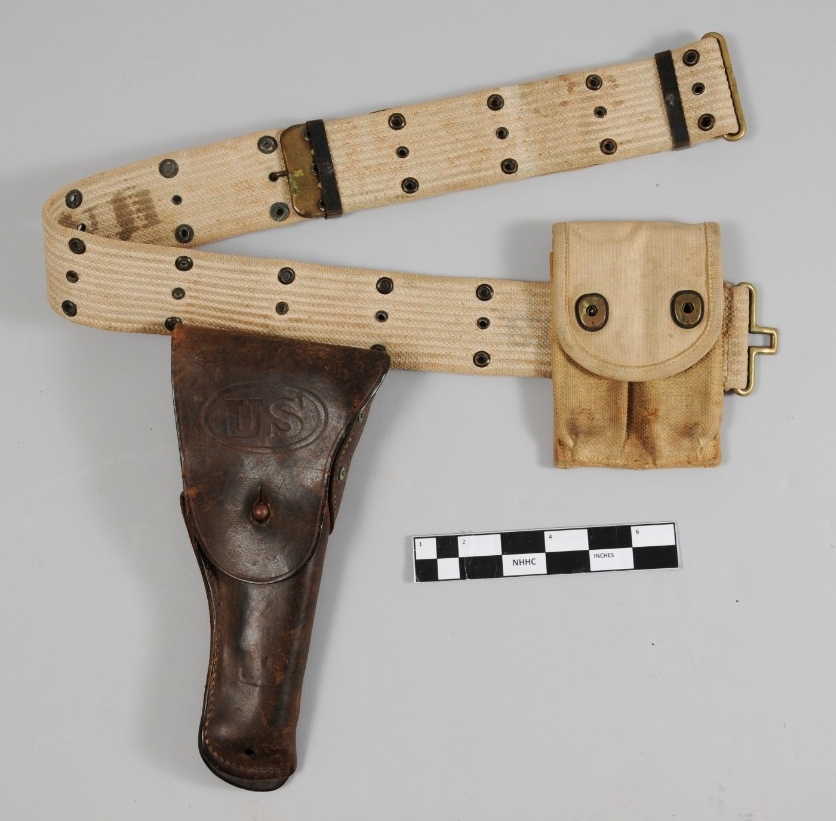 The sidearm is a standard M1911A1 .45 caliber Automatic Pistol manufactured in 1941 by Colt under a US Army contract. Although the Navy contracted for their own small arms, they also relied on Army procured weapons to supplement their own out of wartime necessity. Designed by John Moses Browning, the M1911 became the standard pistol for all US services. Improvements in 1926 were adopted as the M1911A1, which saw extensive use throughout the 20th century until it was finally replaced by the M9 9mm Pistol in 1986. The accompanying olive drab cotton web M1936 Belt, M1918 Magazine Pocket and russet leather M1916 Holster are typical Army procured accoutrements used in conjunction with the M1911 series pistols.

Captain Victor Antoine Moitoret was a graduate of the United States Naval Academy, class of 1941. In September 1941, then-Ensign Moitoret served as Assistant Navigator aboard USS Hornet (CV-8), joining the ship at Norfolk Naval Station. Moitoret served aboard Hornet during the Doolittle Raid on Japan in April 1942, the Battle of Midway in June 1942 and the Solomon’s Campaign of August to October 1942.

On 26 October 1942 during the Battle of the Santa Cruz Islands, Moitoret wore this sidearm while serving as Hornet’s Officer of the Deck (OOD). The OOD’s many duties include navigation and supervising the bridge watch, as well as the overall safety and security of the ship. When in port this also includes overseeing the ship’s quarterdeck and gangplank. Due to the OOD’s responsibilities to maintain the ship’s security, they are typically armed while on duty.

USS Hornet incurred extensive damage during the battle and the crew was forced to abandon the ship. Moitoret was still wearing the sidearm when he climbed down a line from the flight deck and went in the water. He remained in the ocean for nearly two and half hours before being rescued. On 31 October 1942, Moitoret and other Hornet survivors were transported aboard the USS Pensacola (CA-24) to the Advanced Base at Nouméa. From there he returned to the US. 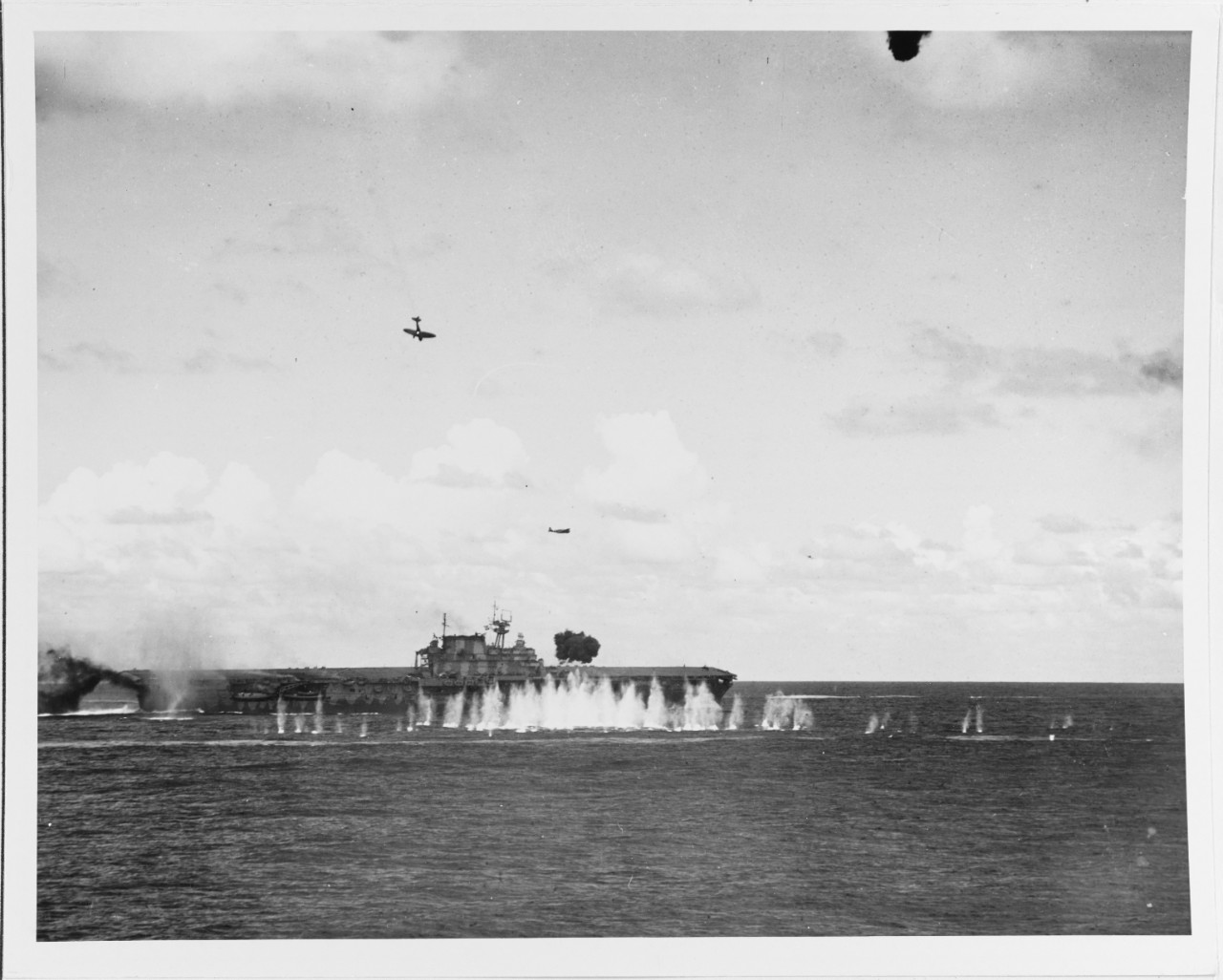 Title: Battle of the Santa Cruz Islands, October 1942
Description: A Japanese Type 99 shipboard bomber (Allied codename Val) trails smoke as it dives toward USS Hornet (CV-8), during the morning of 26 October 1942. This plane struck the ship's stack and then her flight deck. A Type 97 shipboard attack plane (Kate) is flying over Hornet after dropping its torpedo, and another Val is off her bow. Note anti-aircraft shell burst between Hornet and the camera, with its fragments striking the water nearby. Official U.S. Navy Photograph, now in the collections of the U.S. National Archives.

Promoted to Lieutenant, Moitoret was next assigned to the pre-commissioning detail of USS Princeton (CVL-23) as the ship’s Navigator. Princeton was commissioned on 25 February 1943 with Moitoret as one of her plank owners along with over 300 other former members of Hornet’s crew. . After a shakedown cruise, Princeton steamed for the Pacific, arriving at Pearl Harbor on 9 August 1943. Through the rest of 1943 and most of 1944, USS Princeton participated in strikes on Japanese forces throughout the Pacific, including the Gilbert, Marshall, Caroline and Mariana Islands, as well as New Guinea and the Philippines. On 19–20 June 1944, the carrier also participated in the Battle of the Philippine Sea.

On 24 October 1944, the USS Princeton was steaming off of Luzon in the Philippines Islands as part of the Third Fleet, supporting the amphibious landings at Leyte. A lone Japanese D4Y “Comet” (allied code name “Judy”) dive bomber slipped through the anti-aircraft screen and struck the carrier with a single 550-pound bomb. The bomb exploded in the ship’s galley below the hangar deck amidships, igniting fires and secondary explosions. Most of the crew abandoned ship, but salvage parties continued to fight the fires for seven hours. In the afternoon, a massive explosion of ordnance heated by the fires blew the stern off the carrier and caused extensive damage and casualties to the USS Birmingham (CL-62) which was alongside to assist the stricken carrier. The Princeton was finally abandoned and sunk by torpedoes from the USS Reno (CL-96), which set off more ordnance and fuel stores that completely destroyed the carrier. 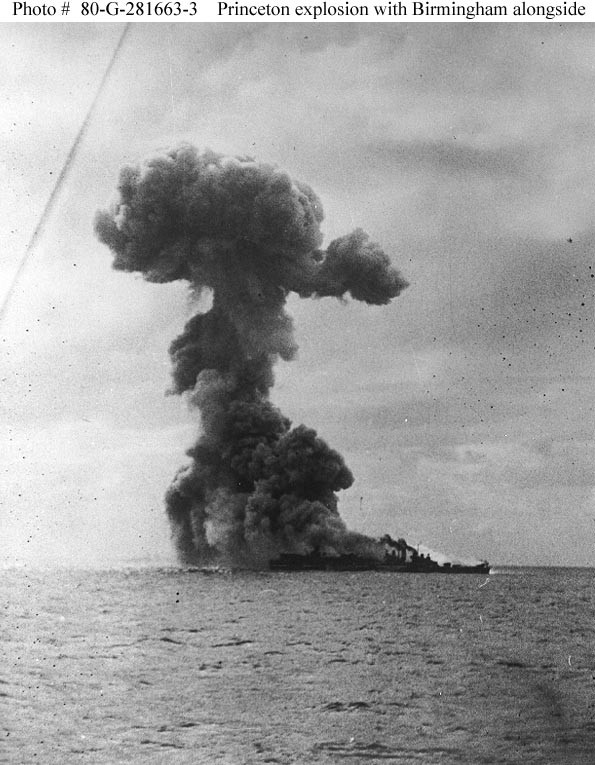 Lieutenant Moitoret was at his General Quarters station on the bridge when the bomb struck. The ship lost power and had no means of communicating with the other ships in its Task Group, so Moitoret climbed atop the bridge and used semaphore flags to relay messages. He was in this exposed position when the explosion ripped off the ship’s stern and was hit by flying debris, for which he received a Purple Heart. Moitoret was among the last men to leave the ship, climbing down a Jacob’s ladder from the forecastle deck into a waiting whaleboat from USS Gatling (DD-671). As Moitoret was forced to abandon his ship for the second time during the war, he kissed the hull of the stricken carrier on his way down the ladder. The Princeton survivors were transferred to the base at Ulithi Athol in the Caroline Islands, and from there to hospital ships or other assignments.

On 15 January 1945, Moitoret was awarded a Silver Star for his actions aboard Princeton during the battle. He stayed in the Navy and served through both the Korean and Vietnam Wars. His varied assignments included Commander of the US Naval Oceanographic Office and as Oceanographer of the Navy. He retired at the rank of Captain in 1972