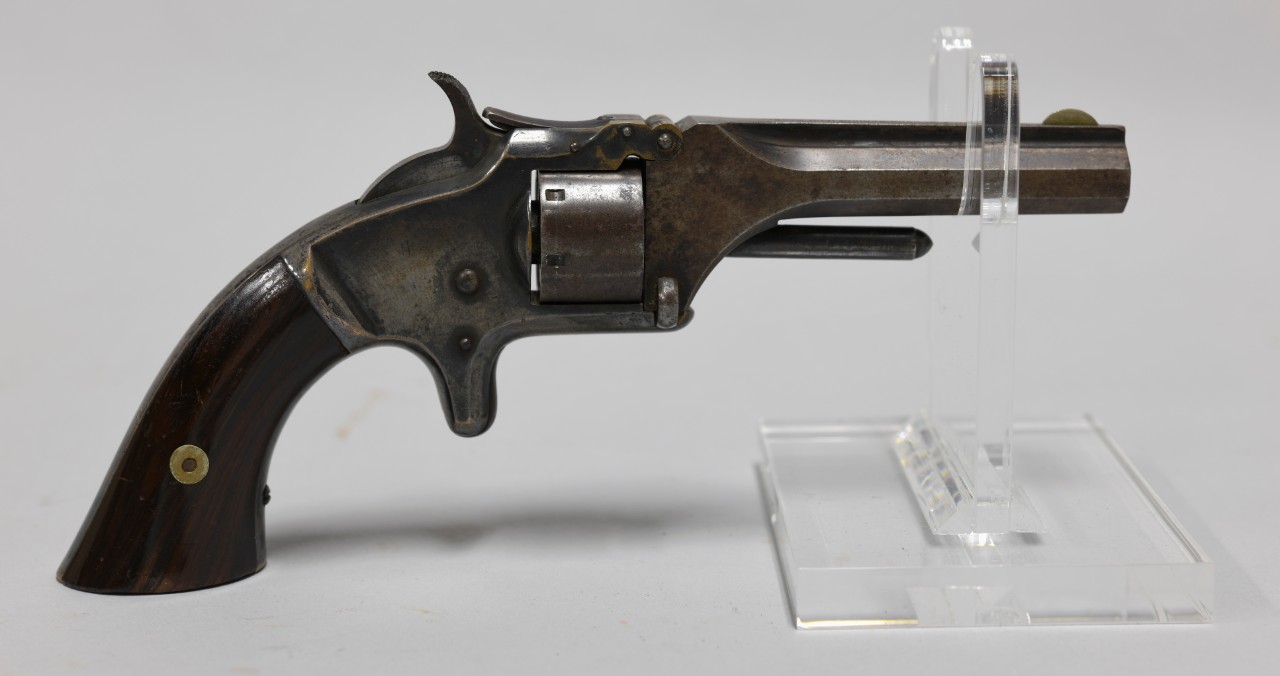 The Smith & Wesson Model No. 1 is a small frame, single-action revolver firing .22 caliber short, rimfire cartridges. The .22 caliber short, black powder ammunition, developed in 1857 specifically for the Model No. 1, was the first metallic cartridge, rimfire ammunition produced in the US. The Model No. 1 was also the first commercially successful revolver to use the ammunition, as well as the first firearm produced by the Smith & Wesson Revolver Company. The revolver proved so popular during the Civil War, that the factory could not keep up with demand. The Model No. 1 was manufactured from 1857 to 1882, with approximately 250,000 produced in three major variants or issues. The example shown is a Second Issue, the variation produced from 1860 through 1868, and was most likely produced in 1867. 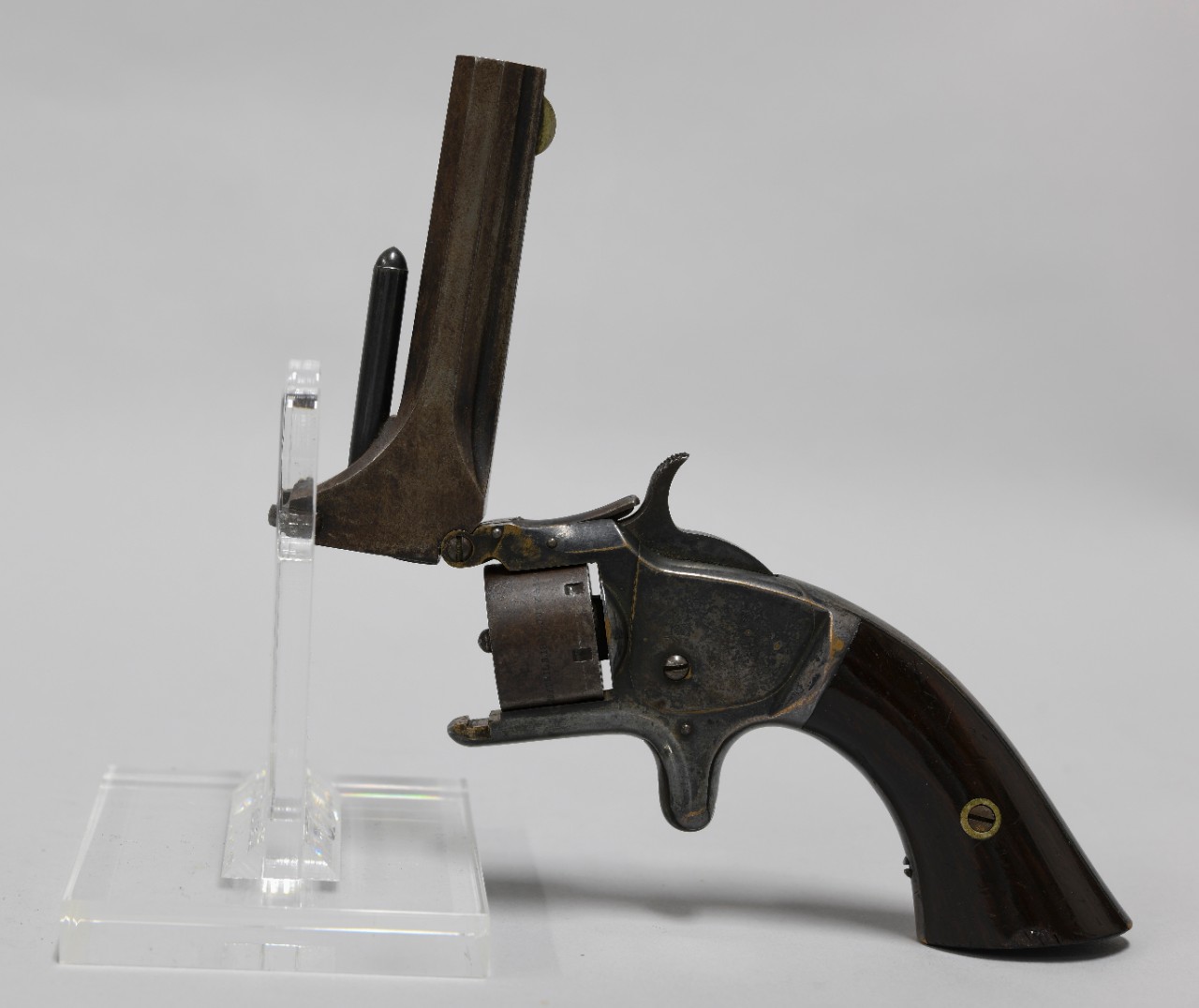 The frame is dull and worn nickel-plated brass with a bottom break, flip-up design. The octagonal iron barrel is hinged at the top and secured by a spring-loaded catch beneath the cylinder. The barrel is rifled and has a brass-wash blade-type front sight affixed near the muzzle. The cylinder has seven chambers and seven external cylinder stops. Secured by a single grip screw, the flared, flat bottom, two-piece wood grips have a high gloss finish. The revolver has a spur trigger and a wedge hammer with a cocking spur. The rear of the hammer cover is notched to form a rear sight. There is a fixed ejector rod under barrel and a cylinder latch on the underside of top frame near the hammer. The cylinder is marked: Patented April 3, 1855, July 5, 1859, & Dec. 18. 1860. The top of the barrel is marked: Smith & Wesson Springfield Mass. The front of the cylinder and the rear of the barrel assembly are both marked: HH4. The serial number 117523 is stamped on the bottom of the grip frame.

This revolver was owned by Dr. William Proby Young, a medical doctor in the Washington, DC area during the mid-19th century. Born in 1834 and raised in Washington, DC, William Proby Young earned his medical degree from Jefferson Medical College, Philadelphia, PA in 1855. He practiced medicine until the outbreak of the Civil War. Initially joining the ranks of the Confederate Army as a Private with the 116th Virginia Militia in July 1861, he was re-assigned to the 4th Georgia Infantry as an Assistant Surgeon the following year. During the Battle of Antietam on 17 September 1862, he was wounded while attending to injured soldiers just beyond the regiment’s position on the south side of the cornfield. He continued to attend to his patients and remained on the field following his regiment’s retreat, thus landing him in the hands of the Union Army of the Potomac as a prisoner. On 5 November, he was received at Aiken’s Landing, about ten miles south of the Confederate capitol in Richmond, VA, in preparation for a prisoner exchange. He was declared exchanged on 10 November and returned to his regiment.

On 9 June 1863, he was promoted to Surgeon. He continued to serve with his regiment until the surrender of the Confederate Army at Appomattox Court House on 9 April 1865 and was paroled from that location. On 22 April, he reported to the Provost Marshall General in Alexandria, VA then Washington, DC, claiming Washington as his home. He swore an oath of allegiance to the United States on 15 May 1865. He remained in Washington, DC and continued to practice medicine.

The donor, who acquired it from Dr. Young’s daughter, believed that Dr. Young carried this revolver with him during the war. Though based on a wartime model, the serial number of this revolver puts its production date at approximately 1867, two years after the end of the war. 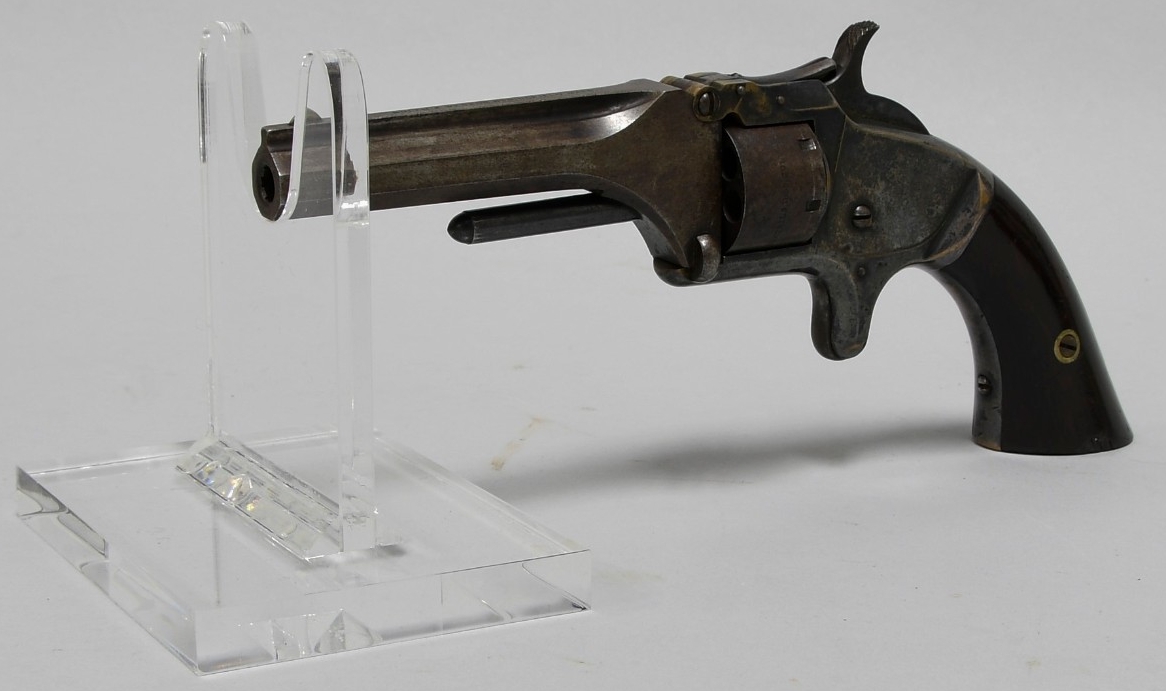