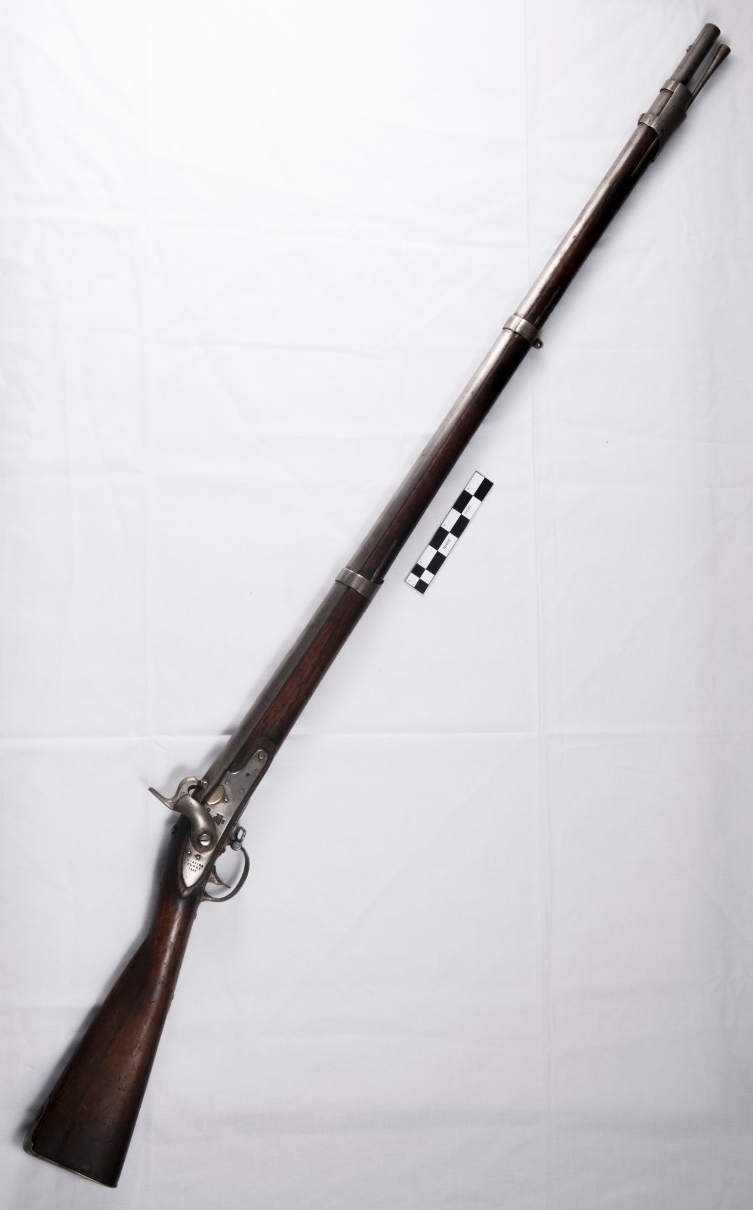 A smoothbore, .69 caliber musket converted from flintlock to percussion ignition. The musket has a 42-inch long barrel held to the full-length stock by two bands and a front band/nose cap, each held in place by a spring clip on the obverse side. The barrel is marked V/P over the national eagle and dated 1836 on the tang. A lug for a socket bayonet is brazed on near the muzzle. An iron rammer is stored in the stock beneath the barrel. The trigger guard bow and the middle band have lugs for sling swivels, but the band is missing the swivel. All of the iron fittings and the barrel are in National Armory bright, but they all appear to have been polished more recently as well. 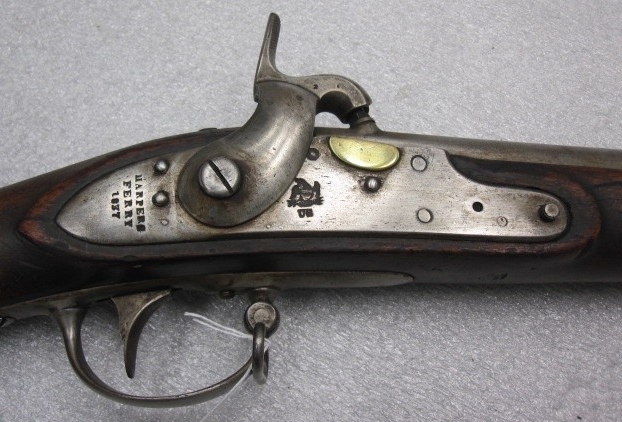 The iron lock plate is held in place by two screws and an L-shaped left side plate. The tail of the lock is marked “HARPERS/FERRY/1837” and the national eagle above “US” forward of the hammer. The tang of the iron butt plate is also marked “US”. The lock plate has had the pan removed and the cutout for the touchhole filled with a brass plug, as well as the frizzen and spring, and the mounting holes filled. A cone shaped insert for the percussion nipple has been added to the right rear of the breech and the flint hammer replaced with a percussion hammer. The lock would have been case hardened during the conversion process, but it too appears to have been polished.

The Model 1822 Musket is an improvement of the Model 1816, itself an improvement on the Model 1812, which was based on the French “Charleville” Model 1777 Musket. Further improvements in parts standardization in 1828 led to the Model 1822/28. Manufactured at the two government arsenals at Springfield, MA and Harpers Ferry, VA (later WV), the flintlock muskets were converted to percussion between 1849 and 1854. The conversion was of the “Belgian” type, or cone-in-barrel, that involved inserting a cone into the breech end of the barrel for the percussion nipple, as well as replacing the hammer, and removing the pan and frizzen. These converted weapons stayed in service with both US and Confederate forces through at least the first half of the Civil War. 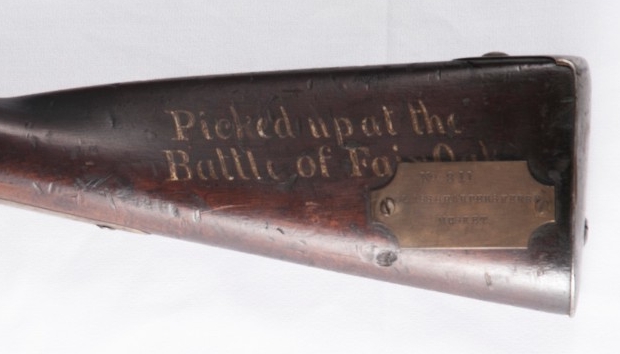 The musket is hand-lettered on the left side of the butt stock in white paint: “Picked up at the / Battle of Fair Oaks.” The Battle of Fair Oaks, or Seven Pines, took place 31 May to 1 June 1862 during Major General George B. McClellan’s Peninsula Campaign, an attempt by the Army of the Potomac to capture the Confederate capitol of Richmond, VA. The musket was likely picked up on the battlefield as a souvenir and later given to the Navy. A rectangular brass plate stamped “No. 311/CLASS.8.HARPERS FERRY/MUSKET” is also attached to the butt with two screws. The brass plaque was applied when the musket was part of the collection of the US Navy’s Bureau of Ordnance, before it came into the collection of NHHC.