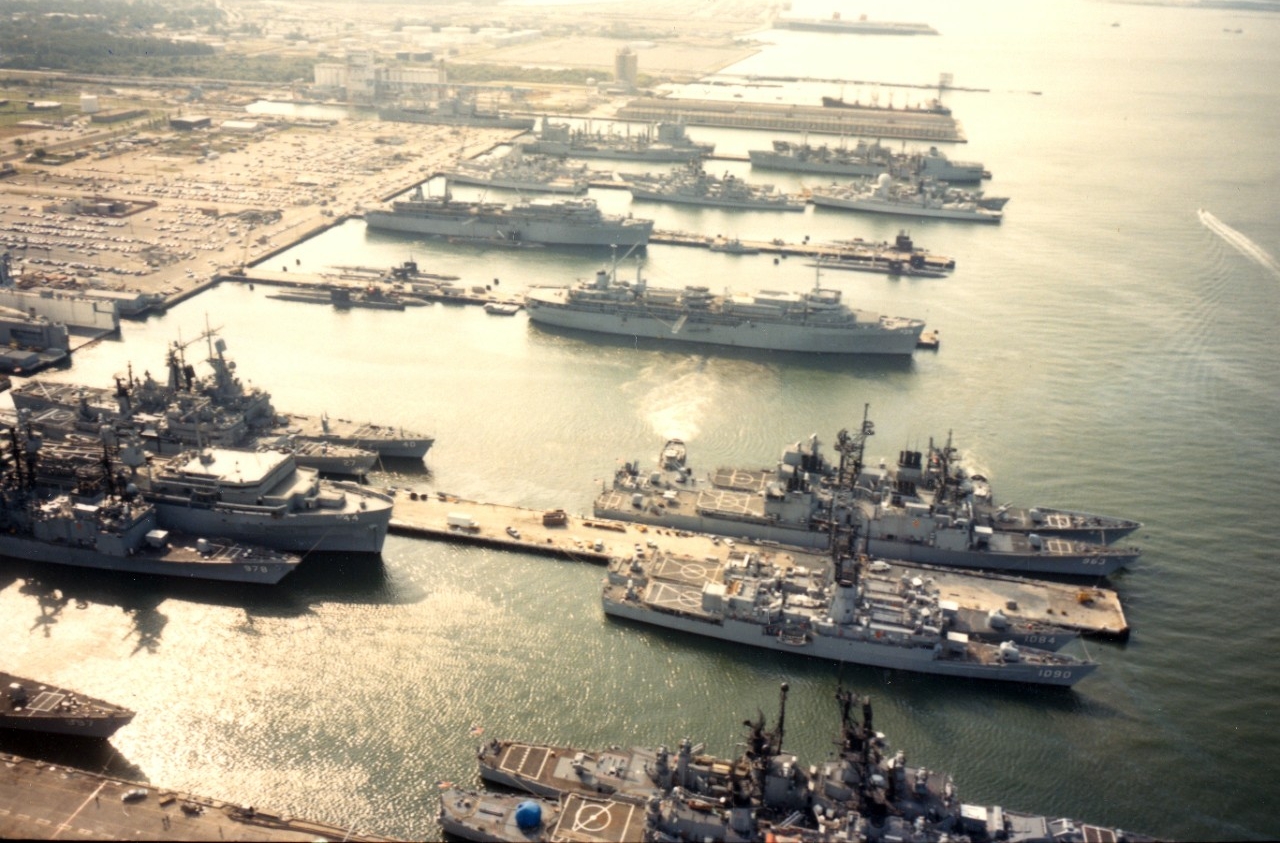 Naval Station Norfolk at the height of the Cold War: An Octotober 1984 aerial view of destroyer and submarine piers (Nos. 22 and 23) with various ships at anchor, including destroyers, frigates, cruisers, destroyers, submarine tenders, and submarines (DN-SC-89-00580).

The land on which Naval Station Norfolk is located was originally the site of the 1907 Jamestown Exposition. During this exposition, high-ranking naval officers were consulted and favored the idea that this site was ideal for a naval base. Immediately after the United States entered World War I in April 1917, the Secretary of the Navy was persuaded to purchase the property. A bill was passed for the purchase of 474 acres. It also set aside funds for development of the base, including piers, aviation facilities, storehouses, facilities for fuel, oil storage, a recruit training station, a submarine base, and recreation areas for fleet personnel. The next six months saw the establishment of the Fifth Naval Headquarters, the Naval Operating Base (NOB), Naval Training Station Naval Hospital, and Submarine Station. By Armistice Day, 1918, there were 34,000 enlisted men at the base.

An airfield for seaplanes was established at the Naval Operating Base in October 1917. In August 1918 it was detached from NOB and became Naval Air Station (NAS) Hampton Roads. It was renamed NAS Norfolk in July 1921. During the late 1930s and early 1940s, much construction took place at the Naval Operating Base and Naval Air Station as war loomed on the horizon. New buildings and piers were constructed and new runways, hangars, and ramps were built for the various types of aircraft flown by the Navy in World War II. In December 1942, recruit training at the base was discontinued in order to focus on advanced training for men going directly to the fleet.

The Naval Operating Base and Naval Air Station, then collectively referred to as Naval Base Norfolk, continued their significant role as the home of the Atlantic Fleet after World War II. In January 1953, Naval Operating Base Norfolk was renamed Naval Station Norfolk as part of a Navy effort to standardize base names. On 5 February 1999, NAS Norfolk was disestablished and Chambers Field became part of Naval Station Norfolk. Today, in addition to being the home for the Navy's largest concentration of naval forces, Naval Station Norfolk also hosts personnel from the Marine Corps, Army, Air Force, and Coast Guard, and supports significant joint missions as well.