A system of service clasps was developed for specific duties during the war. Each clasp is inscribed appropriately and is to be worn on the ribbon of the medal. No one will be entitled to more than one service clasp.

DEVELOPMENT AND HISTORY OF THE NAVY'S VICTORY MEDAL

REVIEWING the history of the Victory Medal (now known as the World War I Victory Medal) is to study a fascinating aspect of the American military's first modern participation alongside forces of other nations.

Of the nearly 5 million Americans who served during the war, some 500,000 were sailors, 50,000 were Marines, and more than 4 million were in the Army. Significantly, then, the Victory Medal was the most widely distributed American award up to World War II.

Within months of the 11 Nov. 1918 armistice ending the First World War, the concept of a Victory Medal was approved and an Interallied Military Commission meeting in France formulated a set of recommendations that would evolve into the Victory Medal we know today.

The name originally proposed for the medal, the "Allies' Medal," was rejected by the Commission because the name technically excluded the U.S. (America was an Associated power versus an Allied power) and Germany, ironically, could issue a medal by the same name. The following design-related resolutions were adopted by the Commission and were to apply to the separate Victory medals created by the 16 Allied and Associated nations:

The various countries' final interpretation of this design criteria is a curious chapter in itself but beyond the scope of this presentation.

On 12 April 1919, announcement of the soon-to-be issued Victory Medal was made by Gen. Peyton C. March, Army Chief of Staff, who placed the medal's design in the hands of the government's Commission on Fine Arts.

That group selected prominent sculptor James Earle Fraser for the project. Celebrated designer of our "buffalo" nickel, Fraser not only executed the U.S. Victory Medal, but also the Navy Cross, an early design of the Navy's Distinguished Service Medal and portions of a proposed (but discarded) redesign of the Navy Medal of Honor. Final endorsement of Fraser's Victory Medal design was given by Secretary of War Newton D. Baker on 14 November 1919.

As specified, the obverse shows a representation of Victory, in this case wearing a spiked crown, arguably similar to that seen on the Statue of Liberty. The reverse has an American shield and the names of 14 Allied and Associated nations. Atop the shield is a fasces - a medievel battle axe. 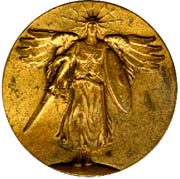 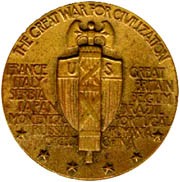 Criteria for the Victory Medal and its clasps were issued by Navy Department General Order No. 482 of 30 June 1919. Sixteen clasps initially were authorized, although only one could be issued to each recipient and worn on the suspension ribbon. A single bronze 3/16-inch bronze star is worn on the service ribbon bar to represent the earned clasp.

Navy service clasps are approximately 1/4-inch wide by 1 1/2 inches long and have a rope border. The Army clasps are far simpler and measure 1/8-inch by 1 1/2-inch long. Both styles are to match very closely the color and finish of the medal itself.

Bureau of Navigation Circular Letter No. 36-20 of 23 April 1920 announced provisions for issuing the Victory Medal, adding that honorable character of service was a precondition for award of the Victory Medal. Recipients were authorized to have engraved on the rim his or her name, rank and the name of the ship or station where he or she served during the war. Discharged or retired Navy personnel applied for their medals either directly to the Navy Department in Washington D.C. or at the nearest Navy Recruiting Office. Active duty personnel applied at their current duty station.

The Victory Medal also was extended to those normally outside the Navy but who had worked alongside naval forces during the war. This included the U.S. Coast Guard, the Lighthouse Service and certain medical officers of the U.S. Public Health Service assigned to duty aboard Coast Guard cutters.

In 1933, the Navy extended the Army's Russia and Siberia service clasps to naval personnel for duty in the following timeframe:

Seven years later, on 05 October 1940, the Secretary of the Navy authorized the award of the Army's FRANCE, ENGLAND and ITALY service clasps to personnel of the Navy and Marine Corps who sailed from the U.S. prior to 11 Nov. 1918 enroute to one of these countries, regardless of their date of arrival in that country - even if those personnel were returned to the U.S. without disembarking.

The first formal assignment of clasps was contained in General Order No. 528 of 25 April 1920. Curiously, it also made reference to clasps HOSPITAL SHIP and GUNBOAT, devices never authorized or officially struck. By 1953, the Navy and Marine Corps Awards Manual specified clasps for approximately 1,388 ships, all of which are detailed on this web site. 140 of these vessels qualified for two different clasps and two ships qualified for three clasps. Again, a recipient could wear only one earned clasp.

A number of unauthorized clasps and ribbon devices have been seen over the years.

Naval personnel routinely received only the single service clasp. The thousands of Marines and Navy Medical Corps personnel attached to the Army in France earned and were authorized to wear those Army clasps authorized by their parent command.

A very few medals are seen with a combination of Navy-style clasps and Army-style clasps, notably by the Navy and Marine Corps Northern Bombing Group in France, whose medals frequently are seen with the Navy "AVIATION" clasp and the Army "YPRES-LYS" clasp. Proper authorization for that and other combinations is unclear.

When any person had been commended as the result of the recommendation of the Board of Awards by the Secretary of the Navy for performance of duty during World War I not justifying the award of a Medal of Honor, a Distinguished Service Medal, or a Navy Cross, he or she shall wear a 3/16-inch silver star on the suspension ribbon and ribbon bar for each such citation.

A bronze Maltese cross, 3/16-inch in diameter, was to be placed on the service ribbon of those officers and men of the Marine Corps and Medical Corps, United States Navy, who were attached to the American Expeditionary Forces in France any time between 6 April 1917, and 11 November 1918, and who are not entitled to any battle clasp provided for by General Order No. 83, War Department, 30 June 1919.