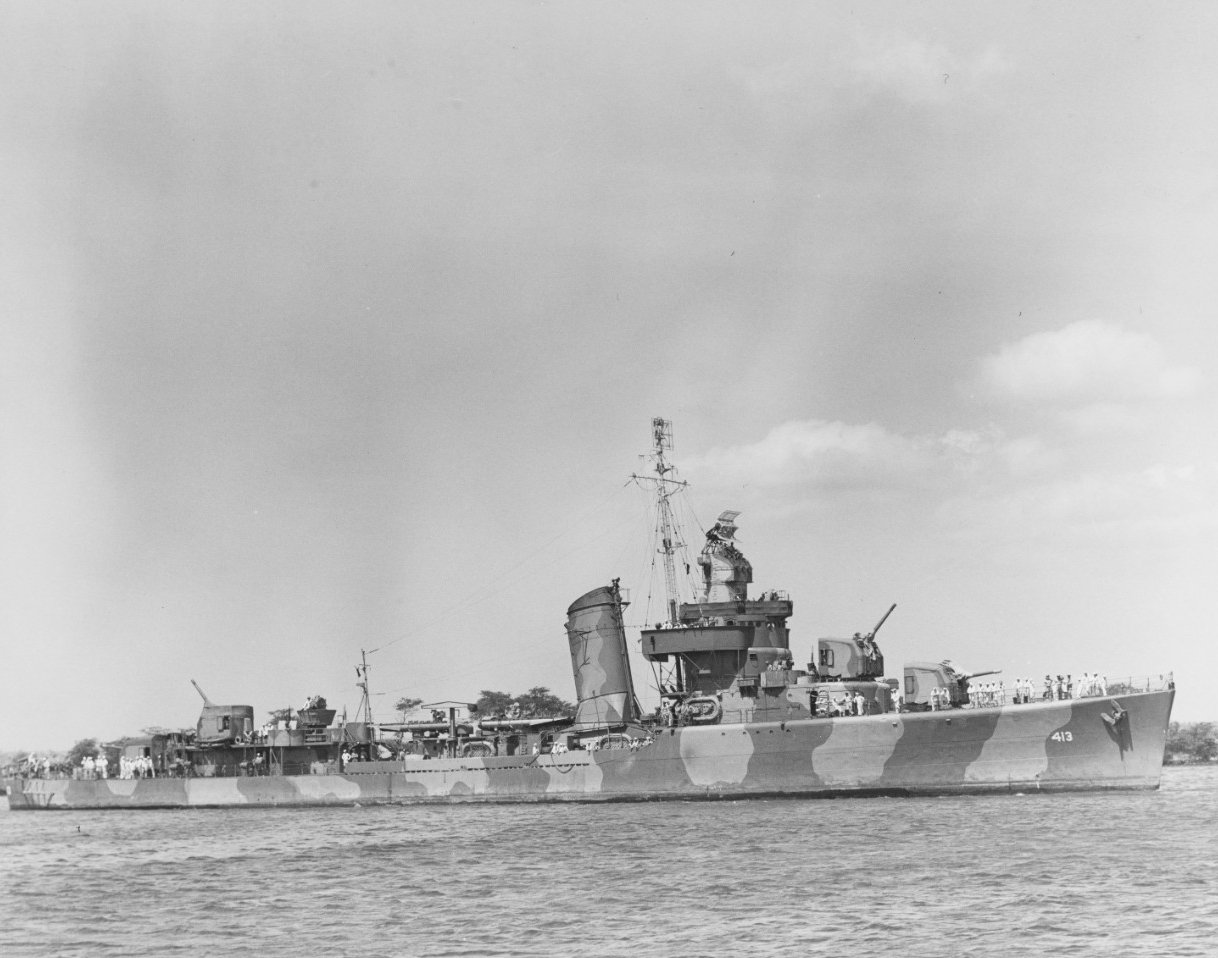 Henry C. Mustin, born in Pennsylvania 6 February 1874, was appointed to the Naval Academy in 1892. He was commended for distinguished service in command of Samar during the capture of Vigan, Philippines, in 1899, when he towed boats carrying the landing party to shore and covered the assault so effectively that not one casualty was suffered. A key member of the Navy's first band of gallant aviators, Mustin piloted the first aircraft ever catapulted from a ship, and flew the first combat missions of American aircraft from Mississippi during the Mexican campaign in 1914. Captain Mustin was the first commander of Aircraft Squadrons, Battle Fleet. He died 23 August 1923. 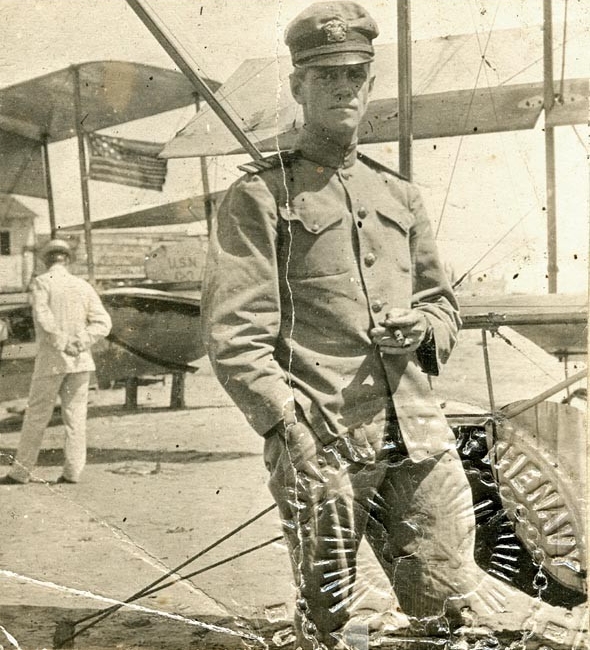 Mustin joined the Atlantic Fleet for the tense period of neutrality patrol preceding American entry in World War II, playing her part in guarding the western Atlantic. On 7 December 1941 she lay in overhaul at Boston, but put to sea next day escorting battleships Idaho (BB‑42) and Mississippi (BB‑41) off to war. She herself completed overhaul in Charleston, S.C., 3 January 1942, transited the Panama Canal 20 January, and arrived at Pearl Harbor 17 February for duty escorting convoys between Hawaii and San Francisco until 3 April.

A convoy mission to Samoa was completed at Pearl Harbor 24 May. Mustin next escorted a merchantman with reinforcements to Midway Island, threatened by the Japanese attack which exploded while Mustin was returning to Pearl Harbor, where she arrived 5 June. Two days later, the destroyer sailed with TF 17, searching for scattered Japanese survivors of the great battle. After a negative search, the force returned to Hawaiian waters 13 June, and Mustin began 2 months of training and patrols out of Pearl Harbor.

Mustin sailed 17 August with TF 17, the Hornet (CV‑8) group, bound for an important role in the great sea warfare which wrestedthe southwestern Pacific from the Japanese. Her group covered the southern approaches to Guadalcanal during the initial phase of fighting there, then struck Buin, Faisi, and Tonolai from the air. In the air Battle of Santa Cruz, 26 October, Mustin rescued 337 of Hornet's survivors, and had the grim duty of destroying the heavily damaged carrier with a full salvo of torpedoes. She avenged the carrier in part by shooting down five enemy aircraft during the battle.

Patrol and convoy duty from Noumea and Espiritu Santo alternated with task force duty, and on 11 November, she joined TF 16 for the third battle of Savo Island. On Christmas Day, Mustin fired shore bombardment at enemy positions on Guadalcanal, to which she had just escorted transports. In February 1943 she again guarded carrier air operations off Guadalcanal, then returned to patrol and escort duties until 14 April, when she returned to Pearl Harbor. 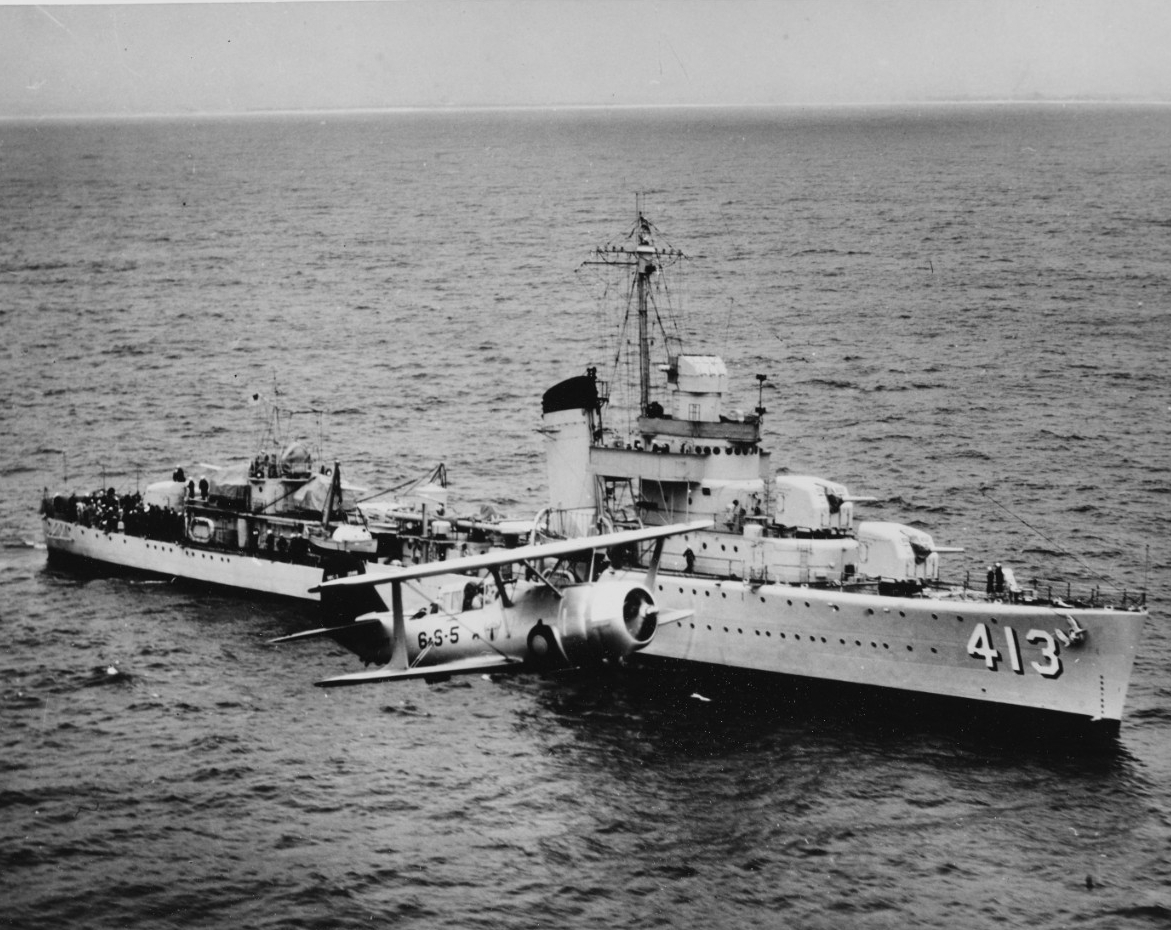 Curtiss SBC-3 scout bomber of Scouting Squadron Six (VS-6) from Enterprise (CV-6) flies low past Mustin (DD-413) during exercises on 26 May 1940. Official U.S. Navy photograph now in the collections of the National Archives, 80-G-1671.

Ten days later, Mustin reached Adak, where she joined the patrol northwest of the island until the end of May, when her force sailed to cover the occupation of Attu. Through the summer, she patrolled the foggy, treacherous waters of the Aleutians, bombarding Kiska a number of times, and blocking Japanese reinforcement of that island. On the night of 25 and 26 July, her group was engaged in the freak "Battle of the Pips," firing on what was actually a phantom Japanese force created only on radar by unusual atmospheric conditions. After covering the American recapture of Kiska 15 August, Mustin headed for a Mare Island overhaul, from which she returned to Pearl Harbor 31 October.

Mustin sortied with TF 52 10 November for the assault on Makin in the Gilberts 10 days later, then returned to the west coast for rehearsal amphibious operations off San Pedro, Calif. She arrived in Lahaina Roads, Maui, 21 January 1944 to stage for the Marshalls invasion, and on the 30th bombarded enemy positions on Wotje. Next day she screened cruisers pounding Kwajalein, and 1 February joined in firing at the atoll. For the next 2 weeks she escorted various task groups around Kwajalein, then operated off newly captured Eniwetok until returning to Pearl Harbor 3 March.

Mustin next joined the support force of powerful TF 58, protecting vital fleet oilers as the carriers and planes they fueled struck Palau, Yap, Woleai, and Ulithi in the Carolines 30 March and 1 April. She returned to the southwest Pacific 7 April to screen carriers in amphibious assaults on New Guinea, at Aitape and Hollandia in April, and at Wakde in May. The continuing operations on and around New Guinea gave Mustin varied duty, on escort, patrol, bombardment, and as fighter‑director, as one landing after another moved up the coast to wrest the huge island from the enemy. Noemfoor, Sansapor, Mios Woendi, Humboldt Bay, Biak, all were struck by forces in which Mustin served with vigor and gallantry.

On 15 September, Mustin served as primary fighter-director in the initial assault on Morotai, Netherlands East Indies, and after escorting reinforcements there from New Guinea, cleared Humboldt Bay 16 October with reinforcements for newly invaded Leyte. Arriving 25 October, Mustin departed the same day, escorting a convoy safely away from the Battle for Leyte Gulf. Escort operations among the great bases of the western Pacific followed as Mustin gave distant support to the Philippines operation, before returning to Leyte Gulf 25 November to join the local defense force under attack by enemy planes 27 November. Mustin splashed three.

After rehearsals off New Guinea, Mustin sortied for the assault on Luzon 9 January 1945, and for the next month fired in support of land forces, joined in repelling enemy air attack off Lingayen, and made antisubmarine patrols. She operated in the Philippines, aiding in movement of reinforcements until 2 February, when she sailed for Guadalcanal, off which she joined the 5th Fleet, serving as antisubmarine patrol ship while awaiting the beginning of the rehearsals for the Okinawa operation. Her task group staged at Ulithi, and arrived off Hagushi Beach, Okinawa, 1 April, screening the transport area as the initial assault was made. For the next 4 days, she guarded the transports off the beaches by day and during their night retirements, firing on the numerous kamikaze attackers. Between 5 and 17 April, Mustin sailed to bring a convoy in from Saipan and Ulithi, then returned to fire support, radar picket, antisubmarine, and antiaircraft duty off Okinawa until 2 May when she joined the screen of an escort carrier group operating to the southwest of Okinawa.

Late in the year she returned to the west coast and sailed back to Hawaii to prepare for operation "Crossroads," the atomic tests at Bikini, in which she was engaged through the summer of 1946. She decommissioned 29 August 1946 after use as a target; remained at Bikini; and was destroyed by gunfire 18 April 1948 in the Marshalls.