The first ship to be named for Adm. Maurice E. Curts (1898–1976), a former Commander in Chief of the U.S. Pacific Fleet and decorated World War II cruiser commander. Adm. Curts was awarded a Navy Cross and the Silver Star for extraordinary heroism while commanding the light cruiser Columbia (CL-56) during the Leyte landings (17 October 1944), the Battle of Surigao Strait (25 October 1944), the Lingayen Gulf landings (6–9 January 1945), and the liberation of Borneo (May–July 1945).

Following the Second World War, Curts held several high-level positions in the Navy including: Force Commander, Operational Development Force, Atlantic Fleet; Assistant Chief of Naval Operations; and Commander Destroyers, Pacific Fleet. In May 1955, he became the Deputy Commander in Chief, Pacific Fleet, serving with the great distinction in that position until 13 January 1956, at which time he was designated as the Commander in Chief, Pacific Fleet. Adm. Curts served in that position until 1 February 1958, after which he became the Commander, Western Sea Frontier, until his retirement on 1 April 1960. He died in 1976 at the age of 77 and is buried at Arlington National Cemetery, Va. 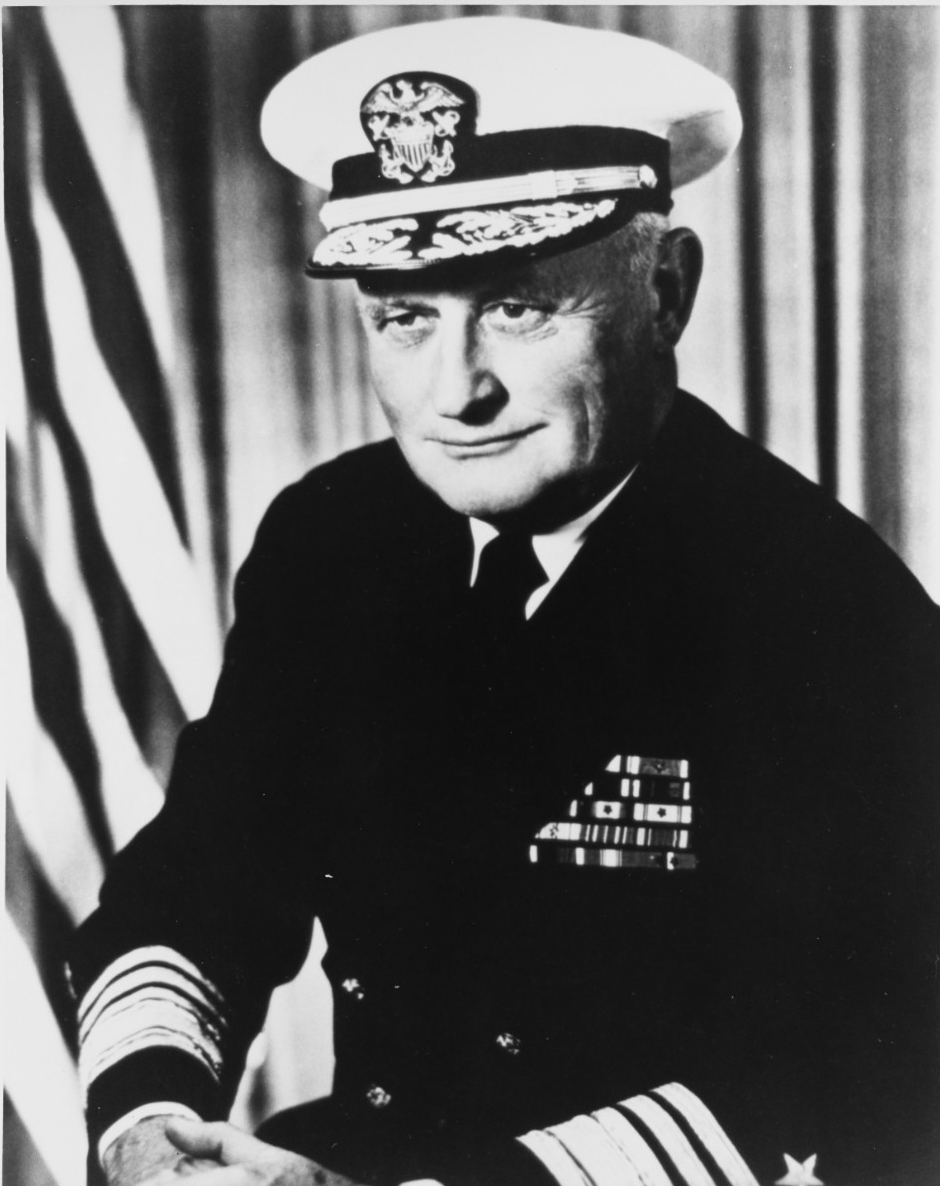 Curts was laid down on 1 July 1981, at San Pedro, Calif., by Todd Pacific Shipyards Corp.; launched on 6 March 1982 and co-sponsored by Mrs. Martha Curts Hilton, the widow of the late Adm. Curts, and Mrs. Kimbrali Curts Efsaif and Ms. Lucinda Scarlet, the granddaughters of the ship’s namesake; and commissioned on 8 October 1983 at Long Beach Naval Station, Long Beach, Calif., Cmdr. James R. Tinsley, USN, in command.

Curts was designed to provide air, surface, and undersea protection for underway replenishment groups, convoys, amphibious forces and other military and merchant shipping. Curts was also one of the first Pacific Fleet (PACFLT) guided missile frigates outfitted with a complete SQQ-89 Anti-Submarine Warfare (ASW) Suite, which made her a vital part of Destroyer Squadron (DesRon) 31’s ASW mission. She supported PACFLT ASW operations throughout the mid to late 1980s, even earning a Meritorious Unit Commendation for her performance tracking a Soviet submarine.

Mounting tensions in the Middle East, precipitated by the Iran–Iraq War (1980–1988), led to an Iraqi aircraft firing two missiles at the American warship Stark (FFG-31) on 17 May 1987. With 37 American sailors killed and/or wounded as a result of the attack, a battle group led by the battleship Missouri (BB-63) deployed to the area in July 1987. Curts got underway with the Missouri Battle Group on 25 July 1987 and remained deployed in the region until 9 January 1988.

On 1 June 1988, Curts cleared Long Beach, marking the start of a homeport shift to Yokosuka, Japan. The move made her one of only two guided missile frigates at the time to join the Forward Deployed Naval Force. Shortly after her arrival in the Eastern Pacific, Curts began participating in maritime interdiction operations, ensuring that merchant vessels in the region complied with United Nations (UN) sanctions. In the course of these operations, Curts rescued 50 Vietnamese refugees from a disabled fishing vessel that had been adrift for ten days. 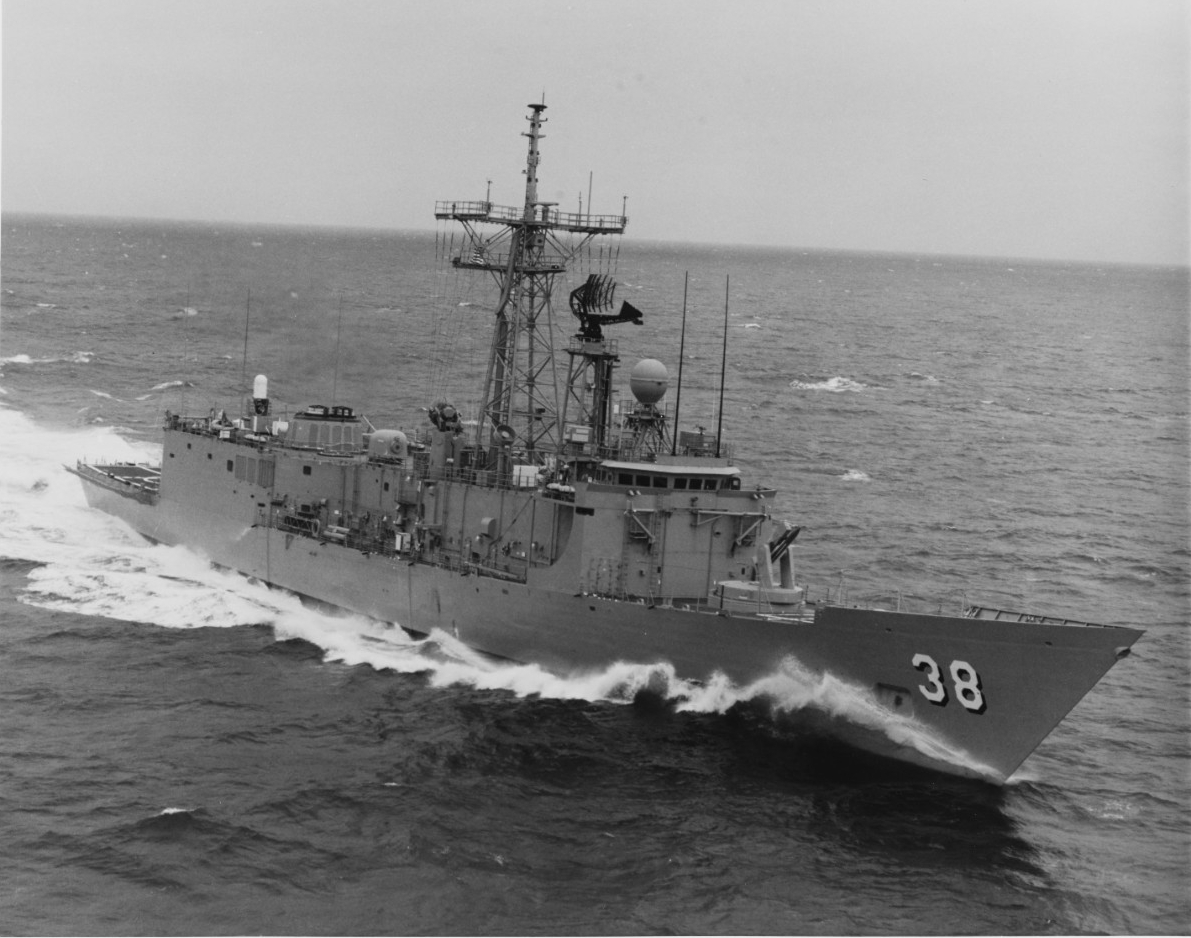 Curts underway in the Pacific Ocean during her sea trials on 28 June 1983. (Naval History and Heritage Command Photograph NH 107547)

In 1990, oil pricing and production disputes between the Middle Eastern nations of Iraq and Kuwait, led to Iraq’s invasion and annexation of Kuwait on 2 August 1990, marking the start of the Gulf War (1990–1991). In response to the invasion, the United States led a military coalition against Iraq that subsequently subdued Iraq in two successive major military operations. Operation Desert Shield (2 August 1990–17 January 1991) which consisted of a buildup of coalition forces in the region, and Operation Desert Storm (17 January 1991–28 February 1991) which represented the major combat phase of the conflict and ultimately subdued the Iraqi military.

Curts deployed to the region on 2 October 1990, standing out with Battle Group Alpha, centered on the carrier Midway (CV-41). After arriving in theater, Curts participated in nearly all the naval actions associated with Desert Storm. On 24 January 1991, Curts embarked U.S. Navy and U.S. Army helicopters and later deployed them to capture an Iraqi garrison on Qaruh Island in the Northern Arabian Gulf. The operation was successful and resulted in the capture of 51 Iraqi soldiers. Curts also destroyed two mines and sank an Iraqi minelayer. For the outstanding role Curt’s crew played in these operations the warship later received a Navy Unit Commendation, as well as the Admiral Arleigh Burke Fleet Trophy.

Not long after her return to the Pacific, Curts was dispatched to the Philippines following the devastating eruption of Mount Pinatubo on 12 June 1991. With the volcano only a short distance from Clark Air Base and Naval Base Subic Bay, Operation Fiery Vigil aimed to provide for the emergency evacuation of all non-essential military and Department of Defense personnel and their dependents. In all, Curts evacuated 547 people.

In 1993, Curts went into dry dock and received the 4,100-ton class modification, which extended her stem by eight-feet and further enhanced her combat capabilities. Operational again the following year, Curts deployed in January 1994, to the vicinity of the Arabian Gulf and Red Sea, where she enforced UN sanctions against Iraq. While in the area, the warship boarded 89 merchant vessels and, in February, rescued the crew and livestock of a stranded merchantman in the Northern Arabian Sea. Following her Middle East deployment Curts participated in the multi-national Rim of the Pacific ’94 exercise. Her exceptional performance while deployed and in conducting fleet exercises resulted in Curts receiving the Battle Efficiency Award for 1994.

Curts’ high-tempo operational pace continued into 1995 with the warship getting underway for a major joint exercise with naval vessels of the Japanese Maritime Self Defense Force and the Navy of Singapore. She then deployed with the Independence (CV-62) Battle Group, and arrived on station in the Arabian Gulf on 8 September 1995. The following year, Curts took part in the 1996 Cooperation Afloat and Readiness Training (CARAT) exercise, which included warships from Malaysia, Thailand and Singapore. In keeping with the Seventh Fleet’s mission to develop and maintain joint operational capabilities with America’s allies in the Pacific region, Curts partook in exercise Tandem Thrust, a U.S.-Australian, multi-service training held within the confines of Australia’s Great Barrier Reef.

Concluding her time as part of the Forward Deployed Naval Force, Curts departed Yokosuka on 11 July 1997, and set out for her new homeport in San Diego, Calif. The following year in 1998, the guided missile frigate got underway for exercise Teamwork South ’98, where she operated closely with Chilean, British and Canadian military forces. She also participated in Rim of the Pacific ’98. On 1 October 1998, Curts joined the Naval Reserve Force.

In late 1999, Curts cleared San Diego for a six-month counter narcotics patrol that brought her to the Eastern Pacific and Caribbean Sea. Her deployment ended in February 2000, and thanks to the aggressive efforts of her crew, the warship intercepted nearly five tons of cocaine. In 2001, Curts returned to the Eastern Pacific for another multi-lateral CARAT exercise.

On 28 April 2003, Curts got underway for CARAT 2003, during which she made port visits in Australia, Singapore and India. She stopped at Pearl Harbor, H.I., in mid-August, and as of 27 August, had returned to her moorings in San Diego. In October, Curts began a lengthy availability that kept her in dry dock for the rest of the year. Beginning in June 2004, the warship voyaged to Alaskan waters for an exercise and then after returning to San Diego, she got underway on 2 August for a six-month deployment to the Caribbean to support counter narcotics and law enforcement operations. Curts continued supporting these operations in the succeeding years.

From 27 April to 27 October 2006, Curts worked with a U.S. Coast Guard detachment for a counter narcoterrorism deployment in the Eastern Pacific, which resulted in the detention of 45 drug traffickers and the seizure of three tons of contraband. The warship won the Battle Efficiency Award for 2006.

In 2008, Curts deployed with the Abraham Lincoln (CVN-72) Carrier Strike Group to the Fifth Fleet Area of Operational Responsibility (AOR). From 8 January to 16 July 2010, the warship conducted an independent six-month cruise to the Eastern Pacific and Arabian Gulf. According to the Command Operations report for the year, the deployment featured “extensive operations with coalition forces across a spectrum of maritime operations.” This included participation in exercise Eagle Salute and exercise Malabar, both of which enhanced interoperability between U.S., Egyptian and Indian naval forces

After 29 years of service as a U.S. warship, Curts was decommissioned on 25 January 2013 at Naval Base San Diego. A month later on 27 February 2013, she was stricken from the U.S. Naval Vessel Register.