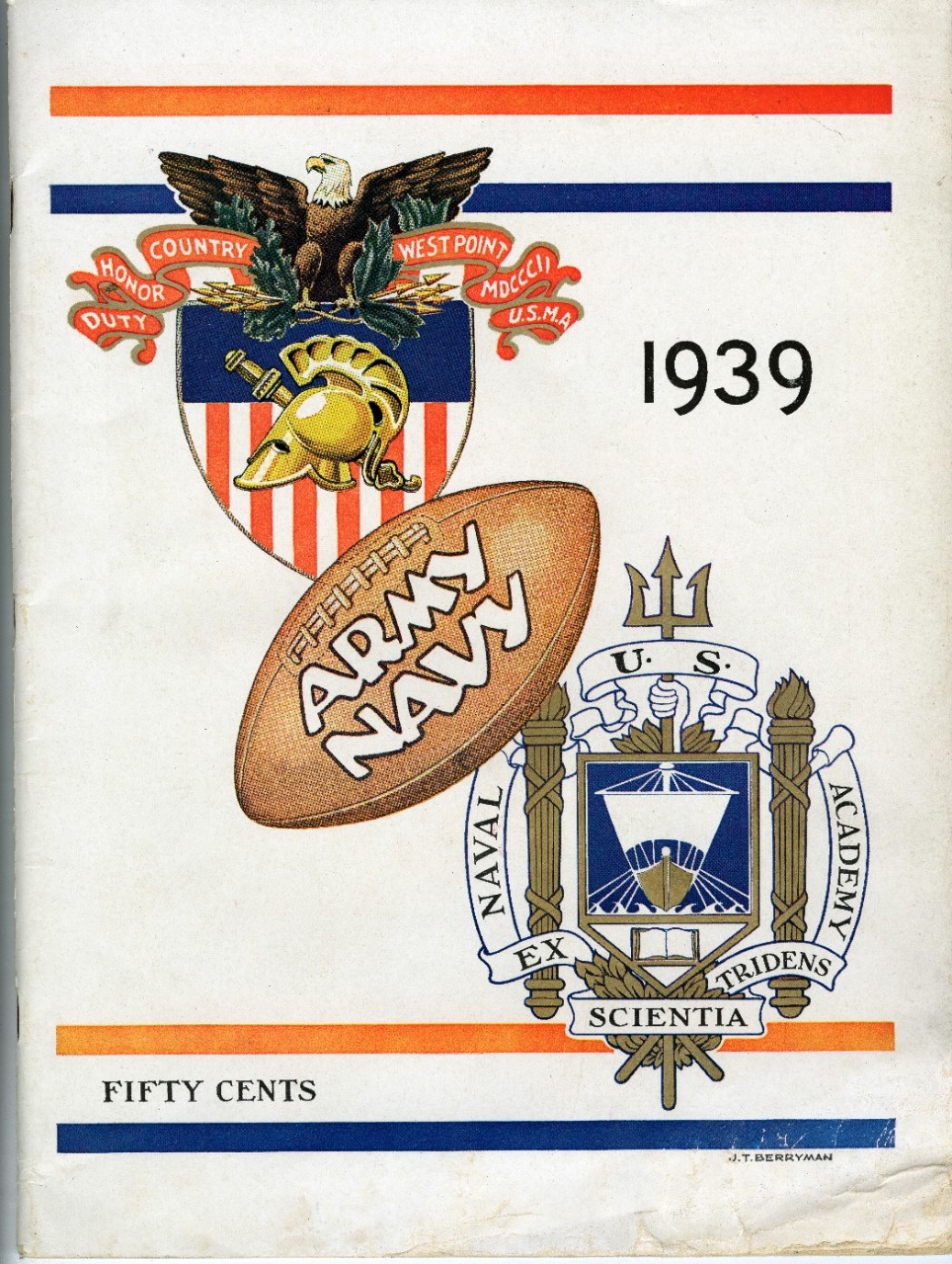 One program, Army-Navy Football Game, dated December 2, 1939. The program has the school seal from West Point in the upper left corner and the seal of the United States Naval Academy in the lower right corner. A tan colored football placed between the two seals reads "Army/Navy". The lower left corner reads "Fifty Cents".

The Army-Navy Game embodies the spirit of the inter-service rivalry of the United States Armed Forces. The first Army-Navy football game was held in 1890 at West Point and resulted in a 24-0 Navy victory. The program and ticket from the NHHC collection relate to the 1939 game, played at Municipal Stadium, Philadelphia, PA with a Navy 10, Army 0 result. Only six games have ever been held on the campus of either academy. Philadelphia is typically selected as the game site, deemed neutral territory and situated approximately halfway between the campuses at Annapolis and West Point. The 1939 game program features themed advertisements and pages dedicated to the respective institutions' football squads, words to traditional cheers and songs, photographs of mascots, and cartoons from popular artists, including Walt Disney. 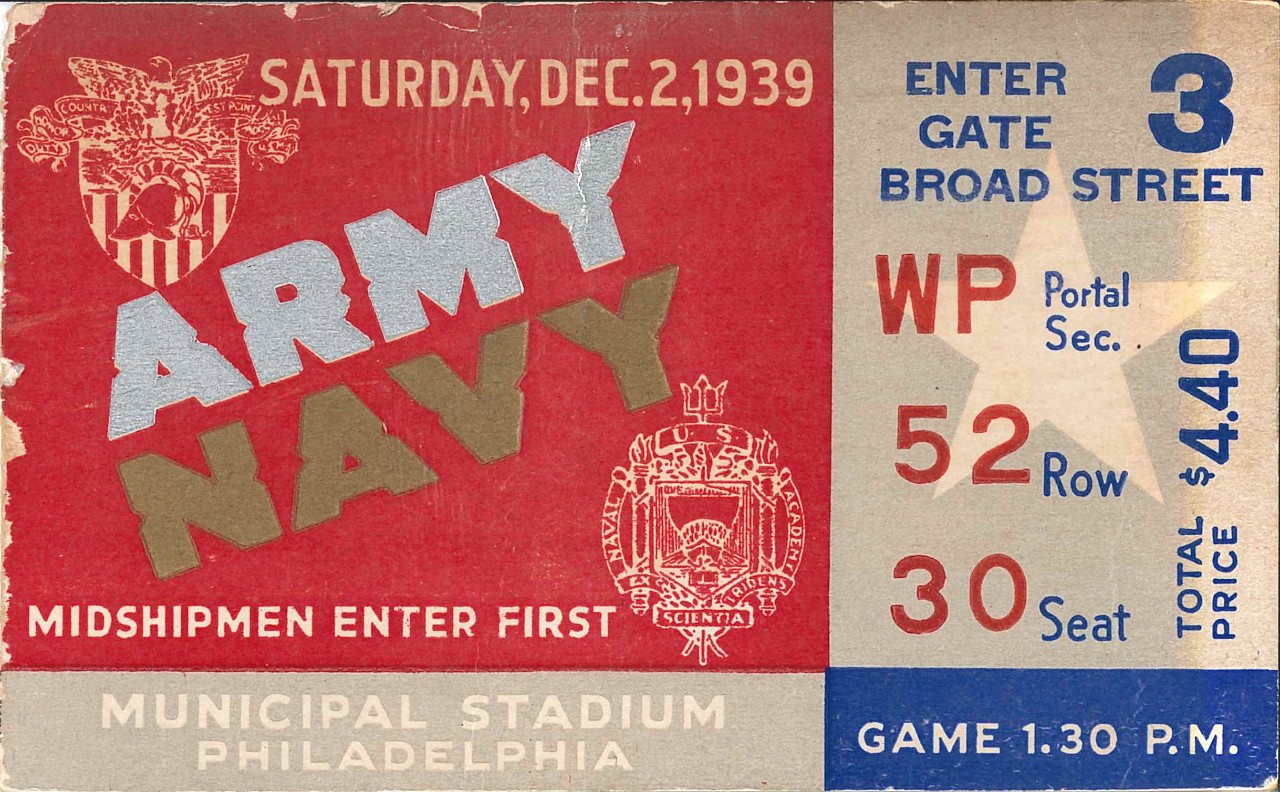 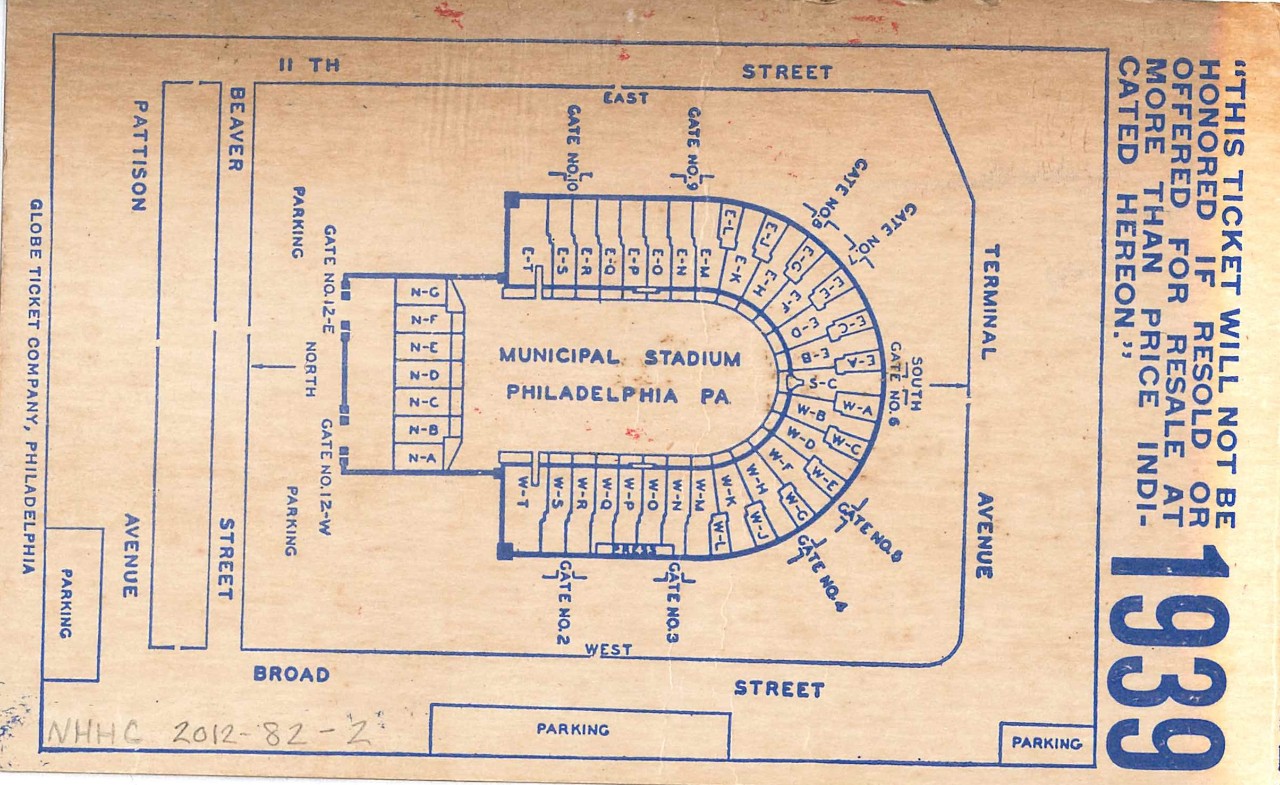 The images below are a small sampling of the interior pages of the football program. 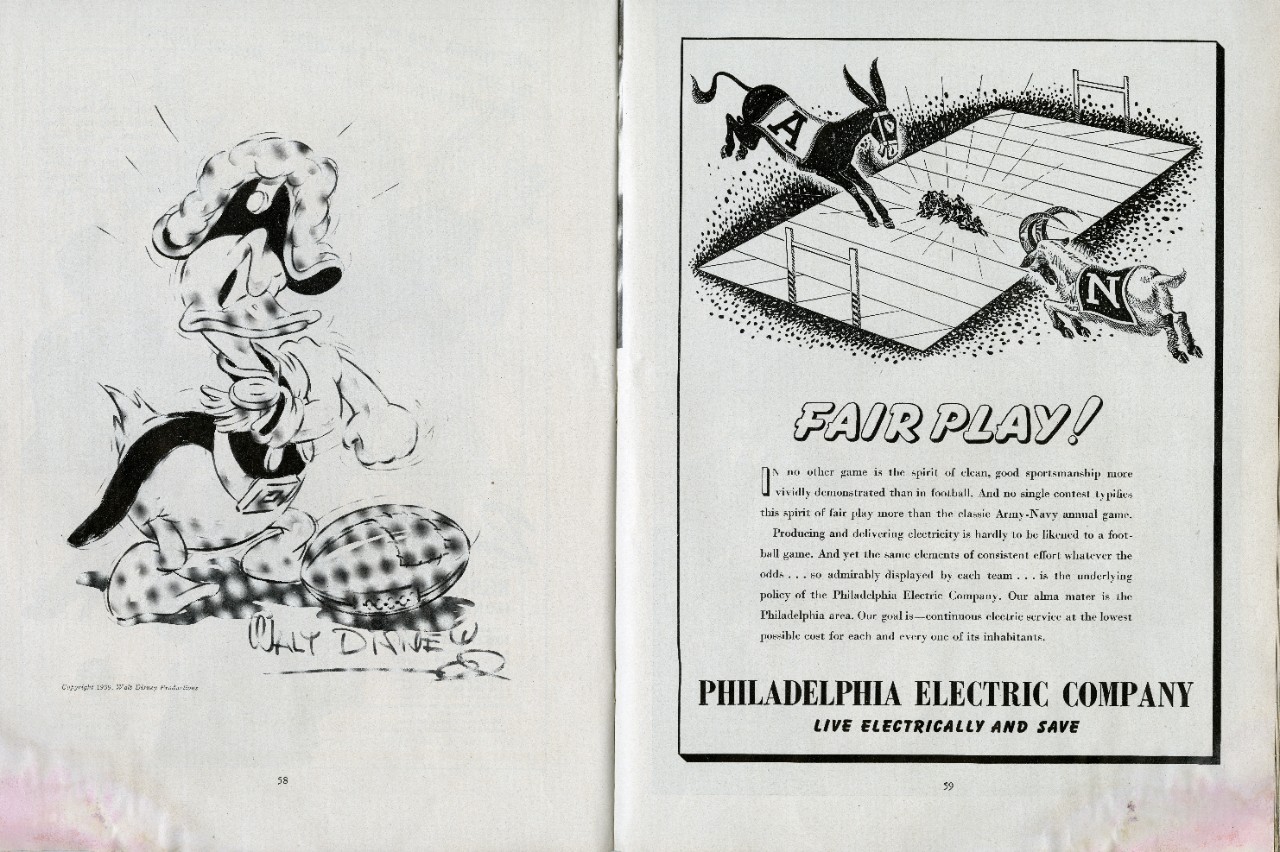 Description: Pages 58 and 59 from the Army-Navy football game program. On page 58 is an image of an angry Donald Duck wearing a bicorne hat with an epaulette on his right shoulder, and wearing a swallowtail coat. He’s pushing up his left sleeve with his right hand and his left hand is clenched in a fist. At his feet is a football. Below the football is the signature of Walt Disney. At the bottom left corner “Copyright 1939, Walt Disney Productions.” On page 59 is an ad by Philadelphia Electric Company. The image at the top shows a football field with players dogpiled in the center. On one of the long sides is a mule wearing a saddle blanket with an A on it. On the opposite side is a goat wearing a blanket with an N on it. The animals are about to engage head-on. 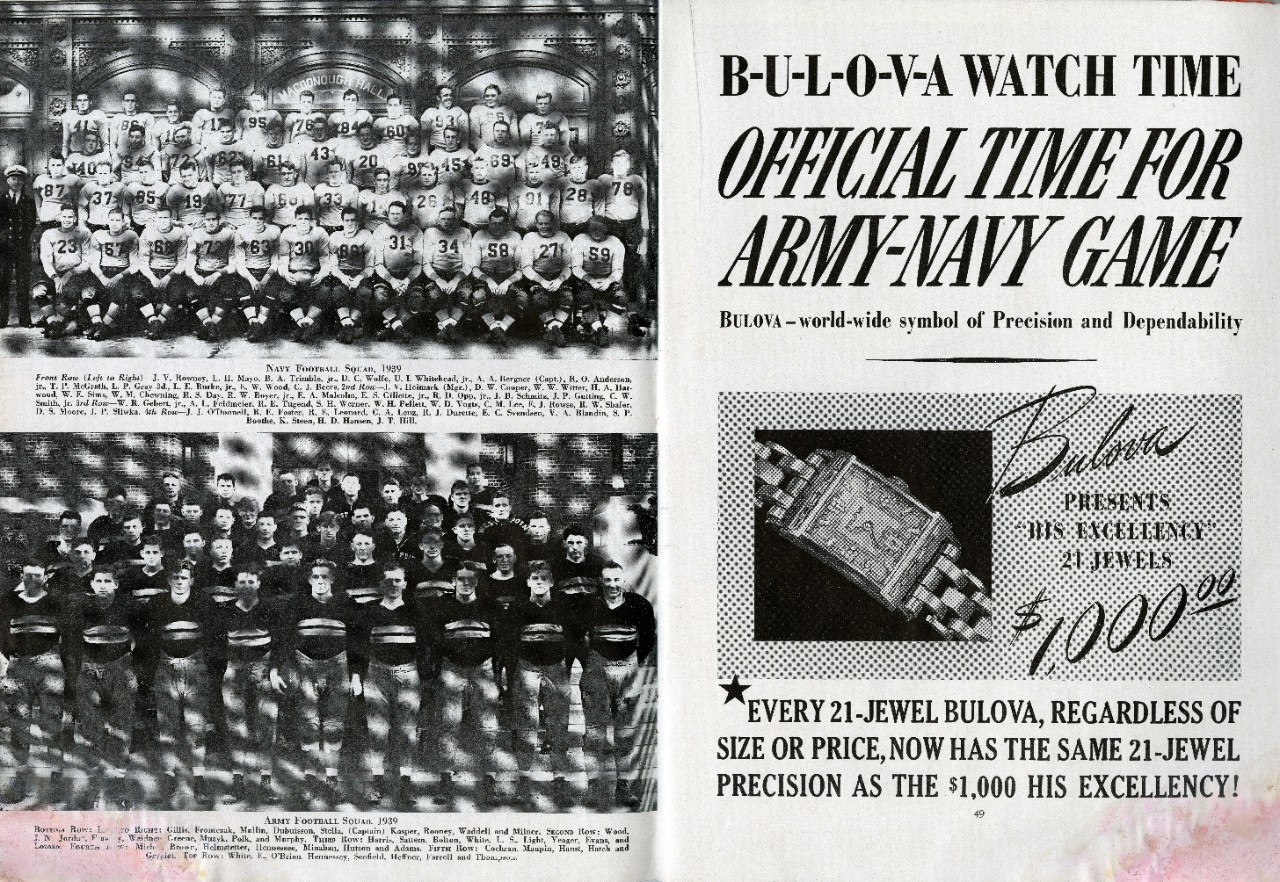 Description: Page 48 and 49 from the Army-Navy football game program. On page 48 are photos of the 1939 Navy and Army Football Squads. 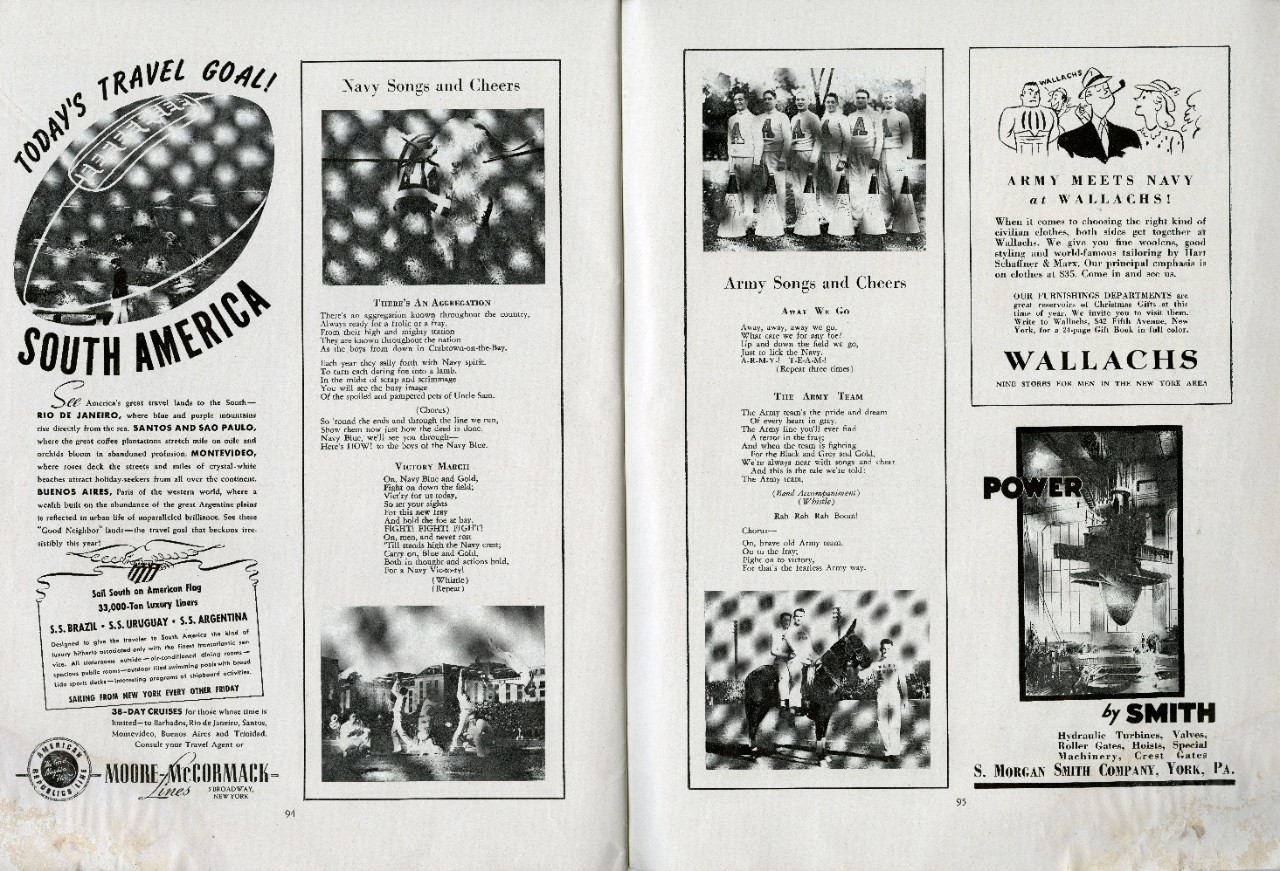 Description: Pages 94 and 95 from the Army-Navy football game program. On page 94 is a column for “Navy Songs and Cheers.” The words for “There’s an Aggregation” and “Victory March” are listed between a photo of the Navy’s goat mascot and a photo of the Navy cheer team performing. On page 95 is a column for “Army Songs and Cheers.” The words for “Away We Go” and “The Army Team” are listed between photos of the Army cheer team posing and the Army’s mule mascot with two riders and a handler all wearing West Point shirts.