A single-shot, .54 caliber, smooth bore, percussion pistol. The 6-inch long, round iron barrel is mounted to the wood stock with a brass band. A lug under the muzzle held the now-absent swiveling ramrod. The enclosed lock is held in place by a single screw on the left side. The circular brass trigger guard is held on by a single screw through the back tang. A circular brass plate covers the butt of the stock. The lock plate is marked “U.S.N./1843” on the tail and “N.P.AMES/SPRINGFIELD/MA.” at the center below the hammer. The lock mechanism is entirely enclosed behind the plate, with only the hammer protruding from the top. A bolster with the percussion nipple extends from the right side of the barrel at the breech and fits into a cutout in the lock plate, allowing the hammer to engage the nipple.

The Model 1842 Navy pistols were the first percussion pistols adopted by the US government. Nathan P. Ames, Jr. based the unique box lock mechanism on the designs of the English gunsmith Henry Nock. The enclosed mechanism proved convenient for a belt pistol since it was less likely to snag on clothing. The Navy accepted the design and over 3,800 pistols were ordered from the Ames Manufacturing Company of Springfield, MA between 1842 and 1844. The pistol was also manufactured by Henry Deringer of Philadelphia, PA during the same period. Although the Model 1842 pistols were the first of their kind in US service, they were largely replaced by revolvers by the time of the Civil War. 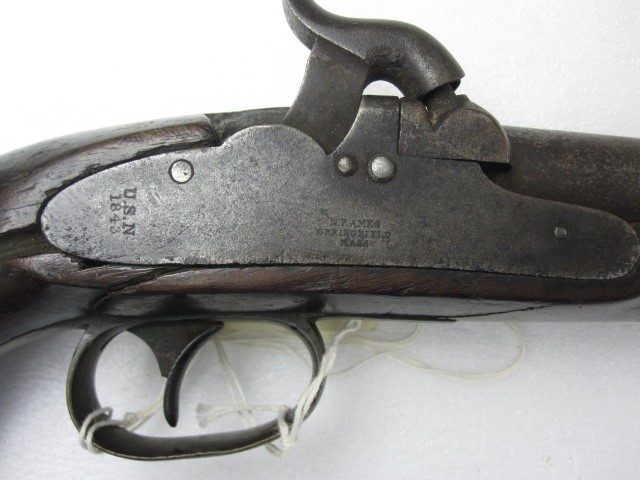