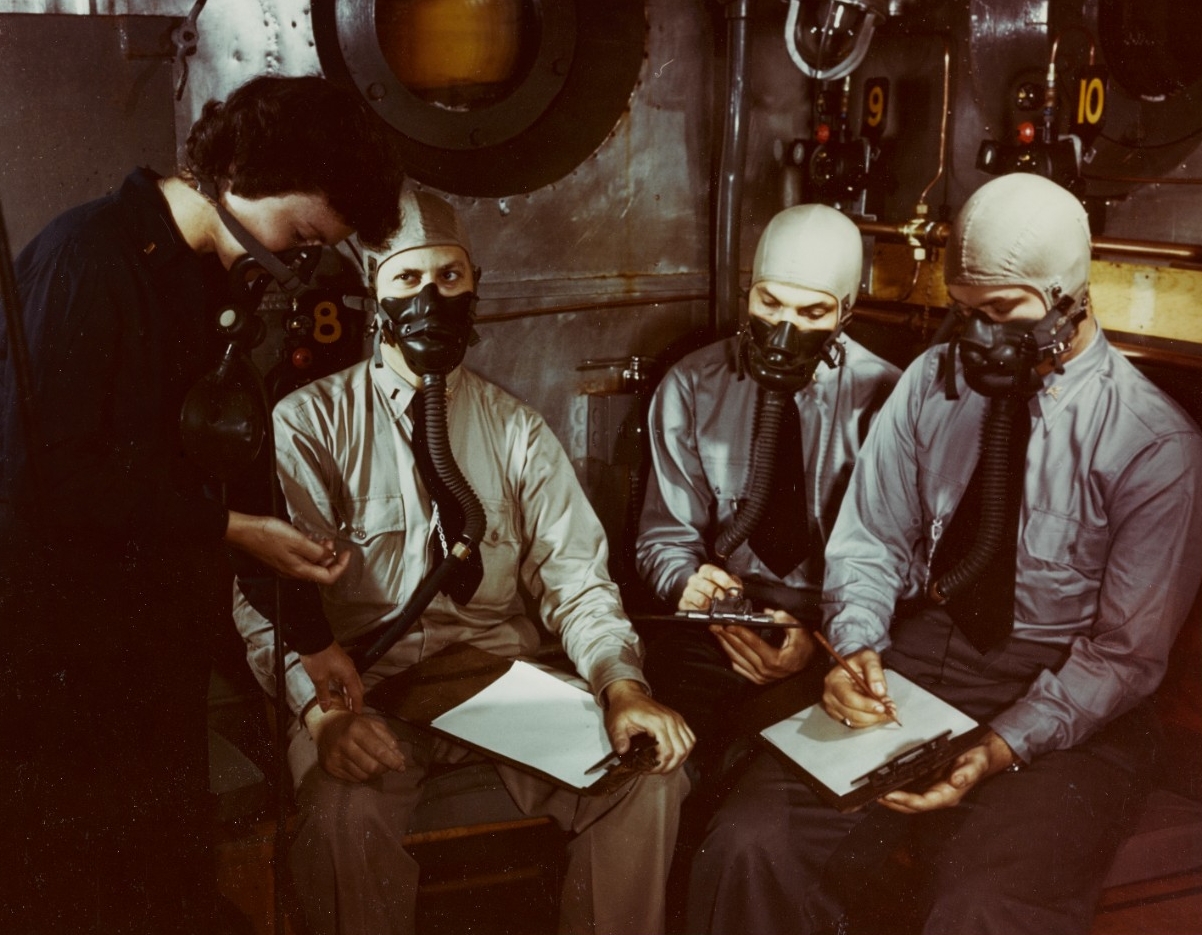 A Navy nurse checks the pulse of an aspiring naval aviator as two medical corps warrant officers take notes, during an experiment in a pressure chamber at NAS Pensacola, circa 1943–1945. Note oxygen masks (80-G-K-15010).

The Navy Department, awakened to the possibilities of aviation, began prevailing upon Congress to include a provision for aeronautical development in the Naval Appropriation Act enacted in 1911–12. In October 1913, Secretary of the Navy Josephus Daniels appointed a board to make a survey of aeronautical needs and to establish a policy to guide future development. One of the board’s most important recommendations was the establishment of an aviation training station in Pensacola.

Upon entry into World War I, Pensacola, still the only naval air station, had 38 naval aviators, 163 enlisted men trained in aviation, and 54 airplanes. Two years later, by the signing of the armistice in November 1918, the air station, with 438 officers and 5538 enlisted men, had trained 1,000 naval aviators. At war’s end, seaplanes, dirigibles, and free kite balloons were housed in steel and wooden hangars stretching a mile down the air station beach.

In the years following World War I, aviation training slowed down. An average of 100 pilots were graduating yearly from the 12-month flight course. This was before the day of aviation cadets, and the majority of the students included in the flight training program were Annapolis graduates. A few enlisted men also graduated. Thus, Naval Air Station Pensacola became known as the "Annapolis of the Air."

With the inauguration in 1935 of the cadet training program, activity at Pensacola again expanded. When Pensacola’s training facilities could no longer accommodate the ever increasing number of cadets accepted by the Navy, two more naval air stations were created—one in Jacksonville, Florida, and the other in Corpus Christi, Texas. In August 1940, a larger auxiliary base, Saufley Field was added to Pensacola’s activities. In October 1941, a third base, Ellyson Field, was commissioned.

During World War II, NAS Pensacola once again became the hub of air training activities. The air station expanded again, training up to 1,100 cadets a month, 11 times the amount trained annually in the 1920s. War in Korea presented problems, as the military was caught in the midst of transition from propellers to jets, and the air station revised its courses and training techniques. Nonetheless, NAS produced 6,000 aviators from 1950 to 1953. During much of much of the 1960s and early 1970s, pilot training requirements shifted upward yet again to meet the needs of the Vietnam War.

In 1992, pilot training at Training Air Wing Six was relocated to NAS Whiting Field and other naval air stations, and the wing assumed responsibility for training all naval flight officers. Also in 1992, USS Forrestal (CVA-59), the Navy's last dedicated training aircraft carrier, was retired and not replaced at NAS Pensacola.

NAS Pensacola today has a myriad of activities including the headquarters and staff of the Naval Education and Training Command; Training Air Wing Six and subordinate squadrons; USAF 479th Flying Training Group and subordinate squadrons; Naval Aviation Schools Command; Center for Naval Aviation Technical Training; Naval Air Technical Training Center; Marine Aviation Training Support Group-21; Center for Information Dominance; Navy Medicine Operations Training Center; Naval Recruiting Orientation Unit; Naval Education and Training Professional Development and Technology Center, Saufley Field; and the world-renowned Blue Angels Flight Demonstration Squadron. A continuing attraction for visitors to the Southeast is the National Naval Aviation Museum and the Barrancas National Cemetery. NAS Pensacola is one of the largest training operations in the Navy with nearly 60,000 students graduating from training programs annually.  NAS Pensacola trains students from every branch of military, the US Coast Guard, other agencies and foreign allies. It is one of only four installations in the continental United States with an active runway and a deep water port.  Naval Air Station Pensacola employs over 23,000 personnel (more than 17,000 military and more than 5,000 civilian).