His Excellency:  President Lincoln at the Navy Yard

For the 200th Anniversary of President Abraham Lincoln’s birth, the National Museum of the U.S. Navy produced an exhibit about the President and his relationship with the Washington Navy Yard. Part of the exhibits were Washington Navy Yard log books, which were believed not to exist but were located at the National Archives by the museum’s interns. The logs contained specific, detailed information about the President’s frequent visits to the Yard. The exhibit also had a list of dates he visited. One note of entry is from April 14, 1865, stating that “At 10:15 p.m., His Excellency President Lincoln was assassinated at Ford’s Theater.” This entry, and many others helped illuminate the important relationship Lincoln possessed with the Washington Navy Yard.

Also included in the exhibit was a speech given by President Lincoln on April 10, 1865, in the April 11 edition of the Washington Star about the surrender of the Confederates. Celebrations had begun upon hearing that General Robert E. Lee had finally surrendered to General Ulysses S. Grant at Appomattox. The U.S. Marine Corps Band provided the music for the crowd that soon moved into the streets of Washington, D.C. The number of participants increased as the parade moved down Pennsylvania Avenue, finally reaching the White House, where they then serenaded the President. Due to this, the President came out and did an improv speech. 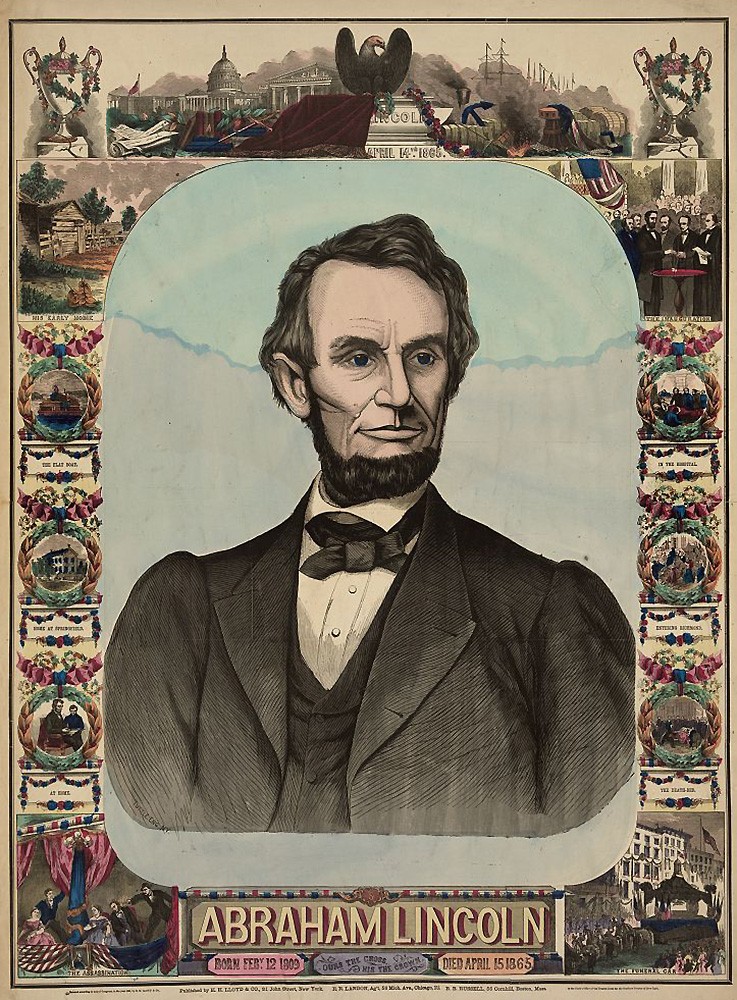 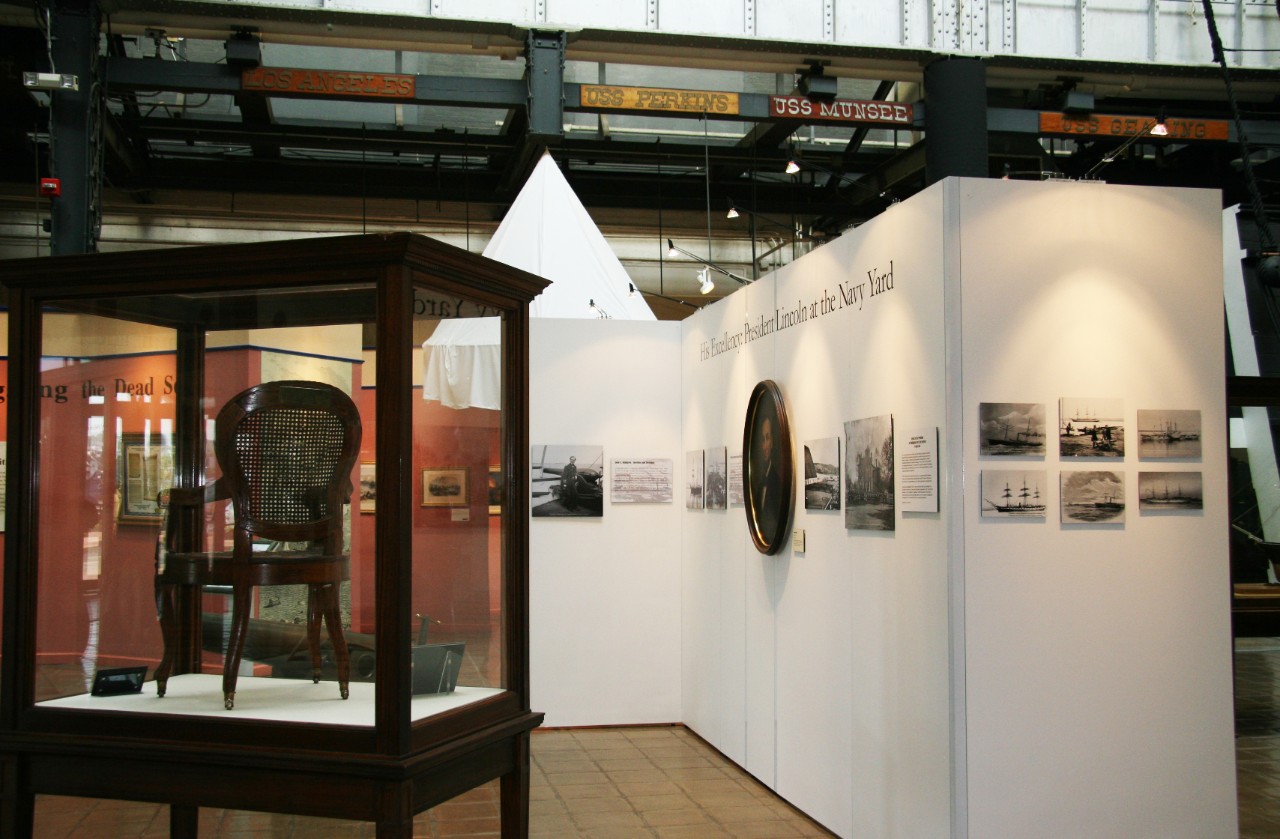 The President sat in this chair in the Navy Department Telegraph Office while waiting for updates on the war. Previously, this char was on the screw frigate USS Princeton during the tragic cannon explosion of “Peacemaker” in February 1844. 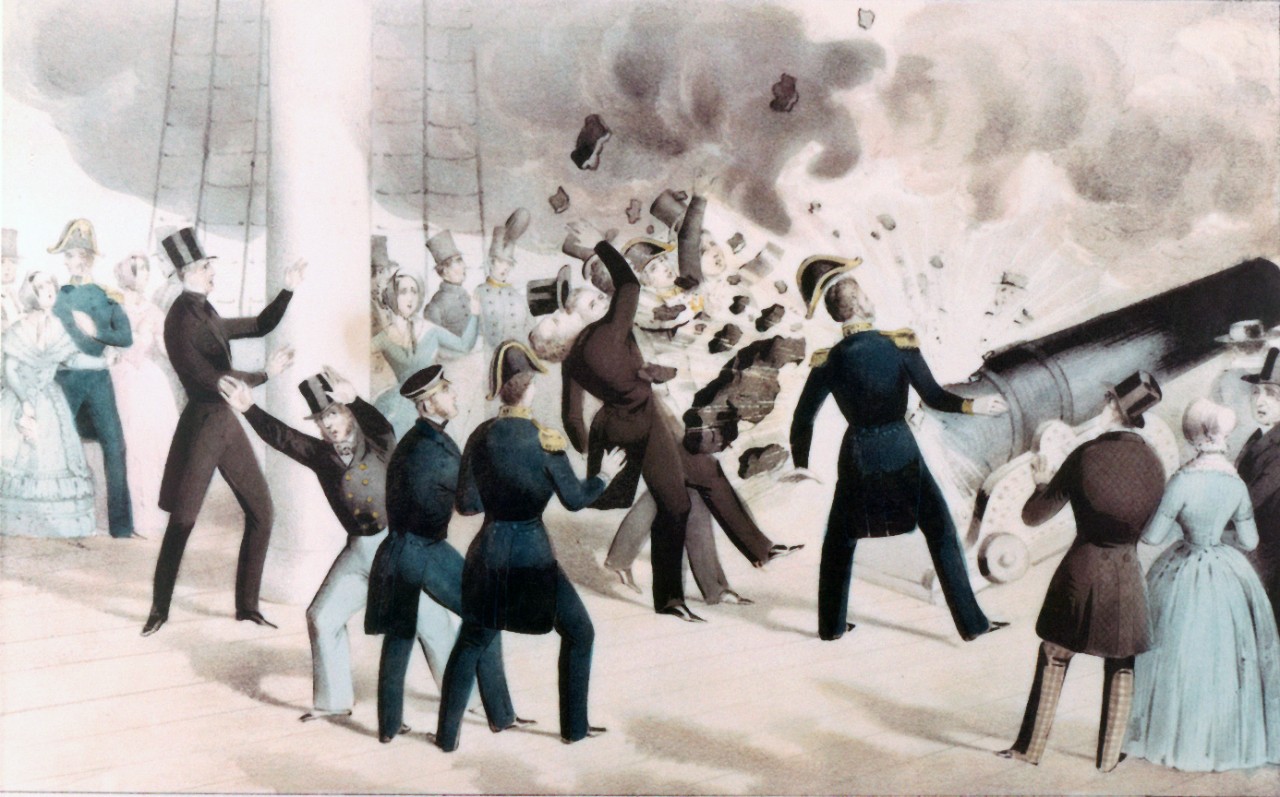 Awful Explosion of the 'Peace-Maker' on board the U.S. Steam Frigate Princeton, on Wednesday, 28th February. 1844 ed. lithograph, published by N. Currier, New York, 1844. It depicts the explosion of a heavy gun on board USS Princeton, in the Potomac River, which killed or mortally wounded seven and injured about twenty people. NHHC Photograph Collection, NH 58906-KN.

John A. Dahlgren designed what was perhaps the most widely used light artillery piece in the Navy – the Dahlgren boat howitzer. Used exclusively on ships, these 20-pound rifles were made at the Washington Navy Yard in the Dahlgren Ordnance Foundry. The gun fired an anti-personnel shell accurately over a mile. Of the 100 rifled howitzers made, this is one of only 13 to survive. 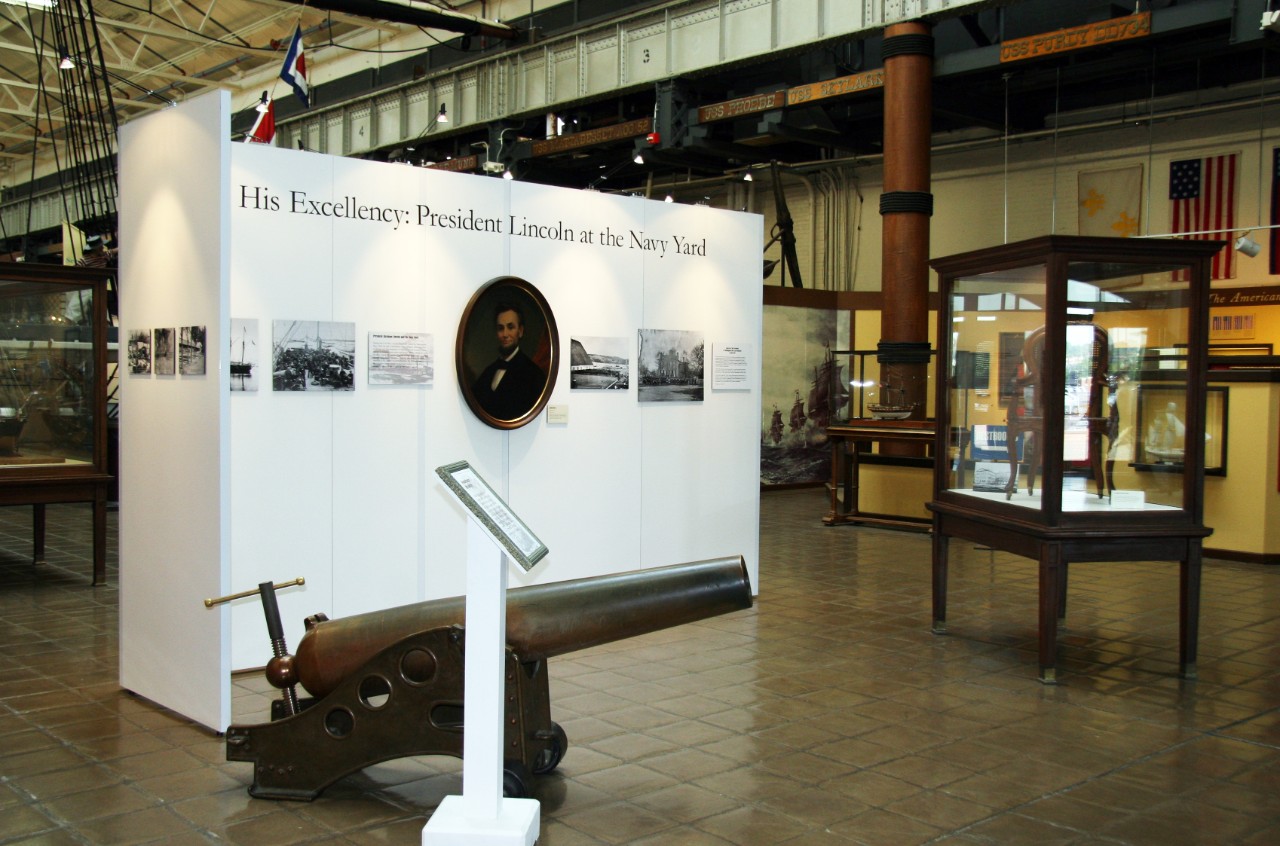 John A. Dahlgren designed what was perhaps the most widely used light artillery piece in the Navy – the Dahlgren boat howitzer. Used exclusively on ships, these 20-pound rifles were made at the Washington Navy Yard in the Dahlgren Ordnance Foundry. The gun fired an anti-personnel shell accurately over a mile. Of the 100 rifled howitzers made, this is one of only 13 to survive.

Exhibited were images of the Washington Navy Yard during the Civil War period. 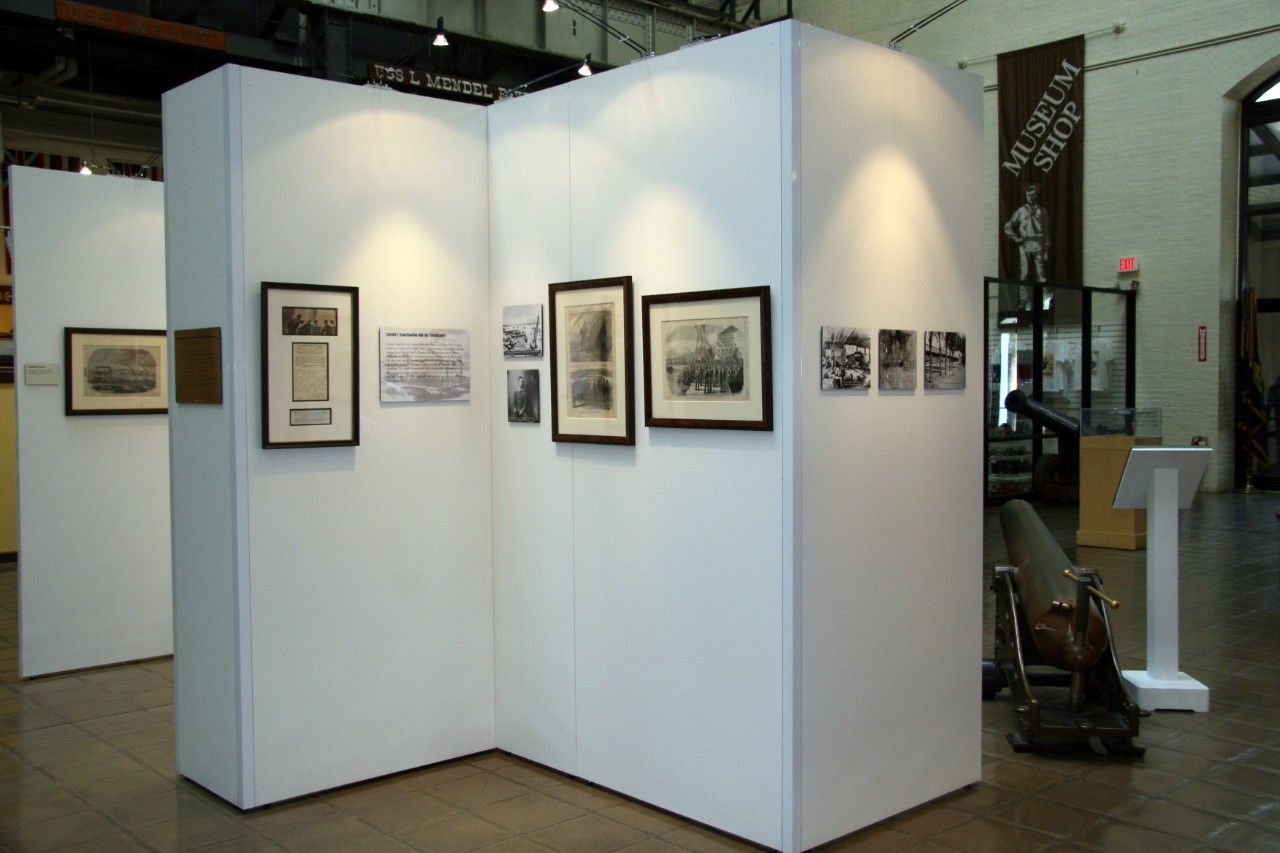 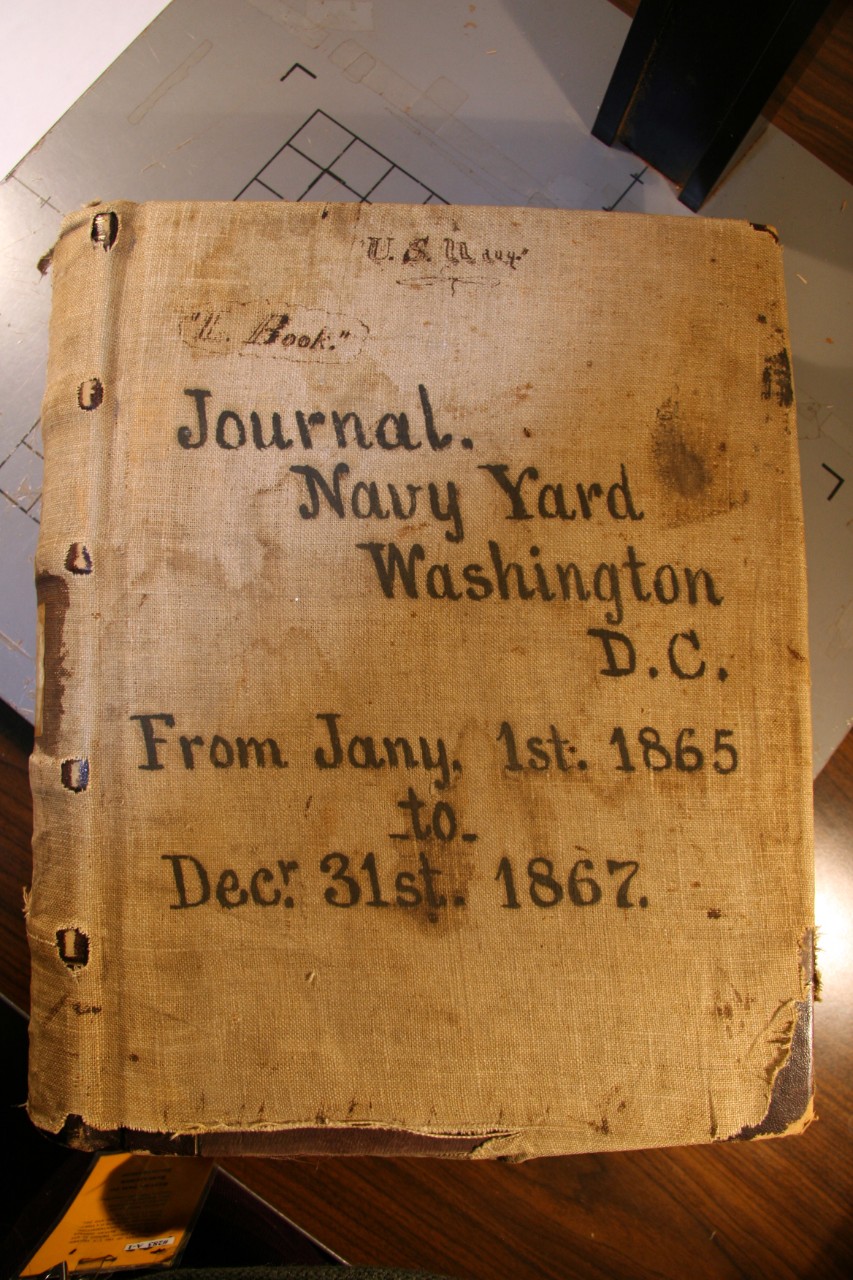 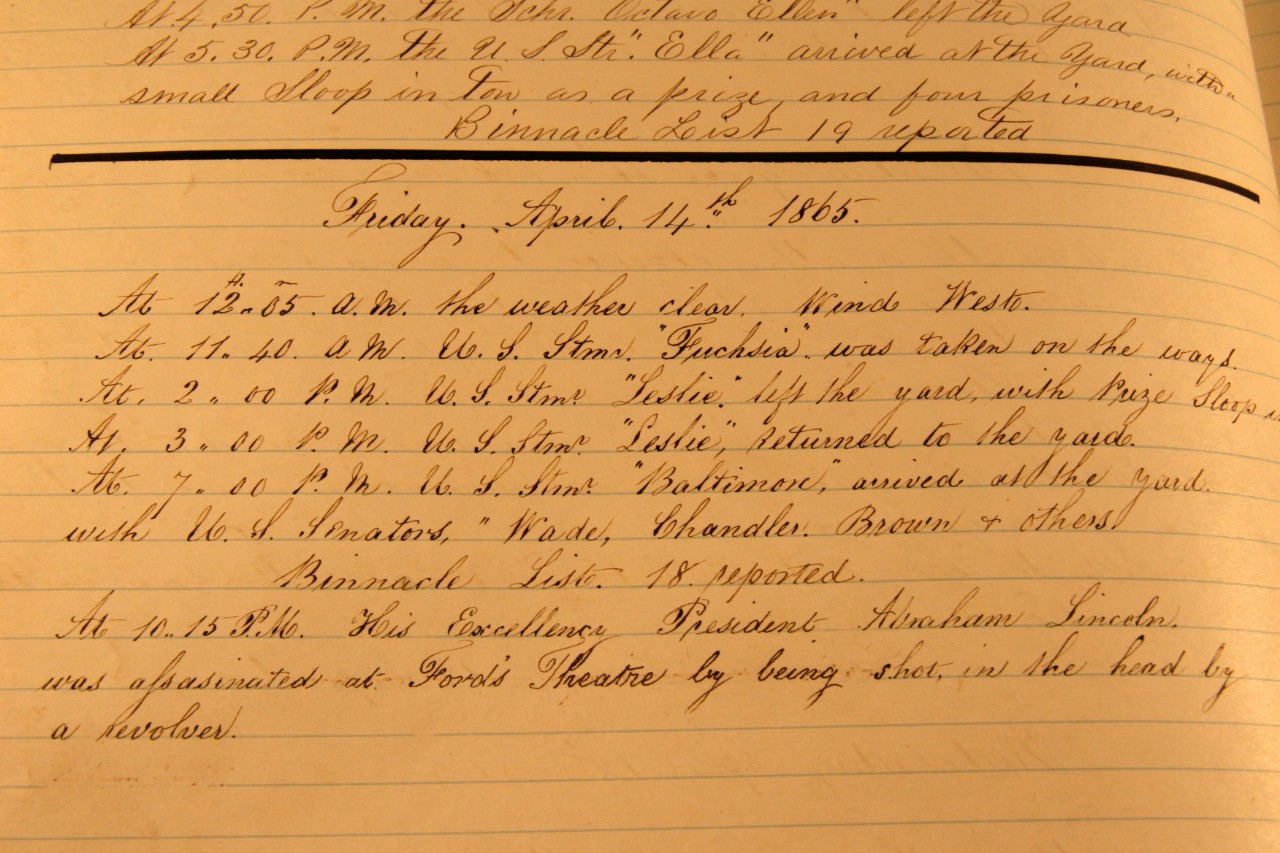 Speech of the President

I am very much rejoiced, my friends, in the fact that an occasion has occurred so pleasurable that the people find it impossible to refrain from giving vent to their feelings. [Applause.] I suppose that arrangements are being made for a formal demonstration either this or tomorrow evening. [A voice- That’s too late.] Should such demonstration take place I of course will be expected to respond, if called upon, and if I permit you to dribble all out of me now, I will have nothing left to say on that occasion. [Laughter and applause.]

I observe that you have a band of music with you. I propose having this interview closed by the band performing a particulate tune, which I will name. Before this is done, however, I wish to mention one or two little circumstances connected with it.

I have always thought that “Dixie” was one of the best tunes I had ever heard. Our adversaries over the way, I know, have attempted to appropriate it, but I insist that on yesterday we fairly captured it. [Applause] I referred the question to the Attorney General and he gave it as his legal opinion that it is now our property. [Laughter and loud applause.] I now ask the band to favor us with its performance. 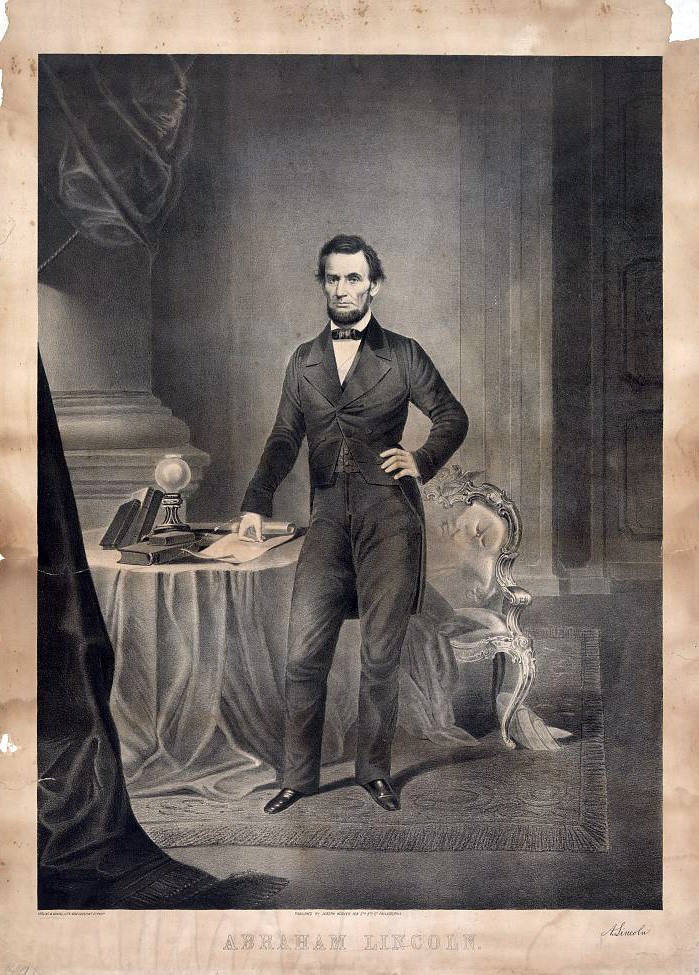 The Exhibit also had a question and answer section:

How did Dahlgren attract Lincoln’s attention?

John A. Dahlgren arrived at the Washington Navy Yard in 1847 to develop a howitzer for amphibious attacks. In 1861 with the departure of his superiors, Commander Dahlgren organized the defense of the Washington Navy Yard and the adjacent 11th Street bridge against eastern Maryland secessionists. The war required his skills as a scientific inventor of artillery, resulting in improvements to the large smoothbore cannons commonly called Dahlgren or soda bottle guns. At the onset of the war, disregarding his dislike for the rifled guns, he rapidly increased the production of them due to the necessary demand. His loyalty to the Union and technological skills attracted Lincoln’s attention. Dahlgren established what became known as the Dahlgren Foundry because a building was needed to accommodate for the making of new ordnance materials in the yard.

The friendship between Lincoln and Dahlgren resulted in his selection as Commander of the South Atlantic Blockading Squadron and promotion to rear admiral. 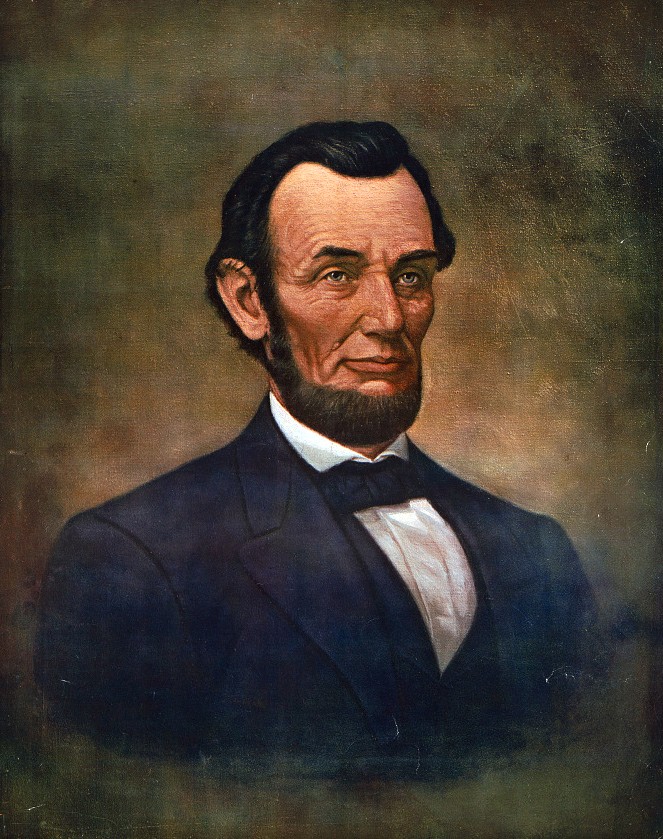 Why did Lincoln visit the Yard? What did he do here?

During the course of the Civil War, Lincoln frequently visited the Washington Navy Yard. The continued innovation in weapons and ammunition played to his technological interests. He often came to view the results of recent ordnance production. He witnessed the firing of the 150 pounder smooth bore. The President met with Dahlgren at the Commandant’s Office (now Building 1) expressing his concern that the war might end with the creation of two nations. Several times, Lincoln, often with Dahlgren and the Secretaries of State and War, boarded ships docked at the yard to take them on trial trips (USS Pensacola), see the new electric-mercury light out on a steamboat (name not specified) and on one occasion, traveled to Acquia on board the USS Miami. In 1865 affairs of state brought him to the yard, but so did personal pleasure such as his visit on the afternoon of his assassination.

The Washington Navy Yard during the Civil War

The Washington Navy Yard during the Civil War was an ordnance site where weapons and artillery for the war were designed and produced to arm Navy vessels. Large caliber Dahlgren guns were tested and made here in addition to a wide variety of different armaments. The Dahlgren Ordnance Foundry located in the northwest part of the yard was a dominant structure at the time. The ordnance yard located in the same location as the foundry, was filled with an assortment of Dahlgren guns, 13 inch seacoast mortars known as “the dictators” in addition to round shot and large mortars. The yard also served as the supply depot of the Potomac Flotilla, which patrolled the river. In 1865 Commodore John B. Montgomery, Dahlgren’s successor as commandant, founded the yard’s first museum, carrying on the tradition of historical collection and display set by Captain Thomas Tingey in 1800. 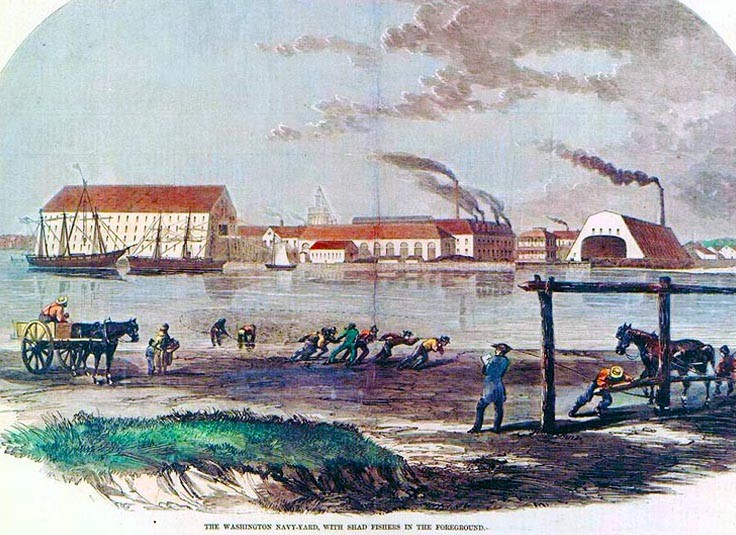 The Washington Navy Yard, with Shad Fishers in the Foreground Hand color-tinted copy of a line engraving published in Harper's Weekly, April 20, 1861, depicting the Washington Navy Yard, District of Columbia, as seen from the southern side of the Anacostia River. The two ships moored along the waterfront, in front of the Western Shiphouse, are USS Pensacola (far left) and USS Pawnee. Note the uncompleted U.S. Capitol dome in the center distance. Courtesy of the U.S. Navy Art Collection, Washington, D.C. U.S. Naval History and Heritage Command, NH 51928.

How was Lincoln’s death linked to the Navy Yard?

Lincoln’s Assassination and the Conspirators

After President Lincoln’s assassination on April 14, 1865 the personnel here reacted with horror. John Wilkes Booth escaped across the river via the 11th Street Bridge at the yard in his flight to southern Maryland. Later when Booth was killed, his body was brought back on board the monitor USS Montauk and examined at the navy yard. The monitor USS Saugus was temporarily used as a prison at the Washington Navy Yard in April of 1865 to hold suspected conspirators of the assassination of President Lincoln. The last Lincoln conspirator, John Surratt, was brought the yard on board the USS Swatara in 1867. 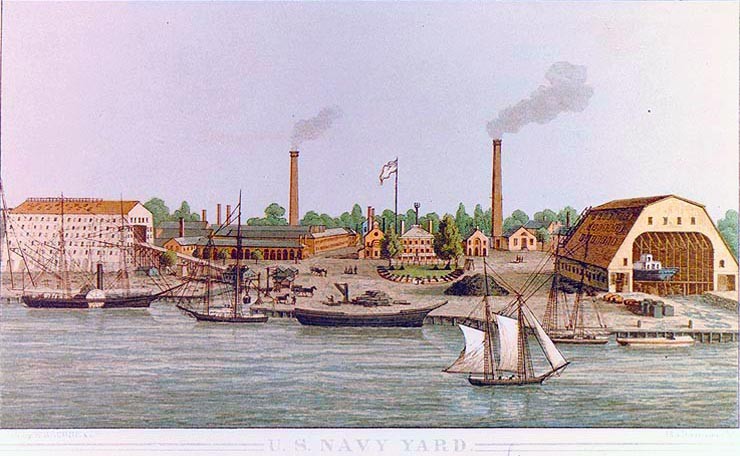 Washington Navy Yard, Lithograph published by E. Sachse & Company, Baltimore, Maryland, circa 1862. It depicts the Navy Yard as seen from above the Anacostia River, looking north, with Building # 1 and the trophy gun park in the center. Courtesy of Mrs. Worth Sprunt, 1974. U.S. Naval History and Heritage Command Photograph. NH 79896-KN.