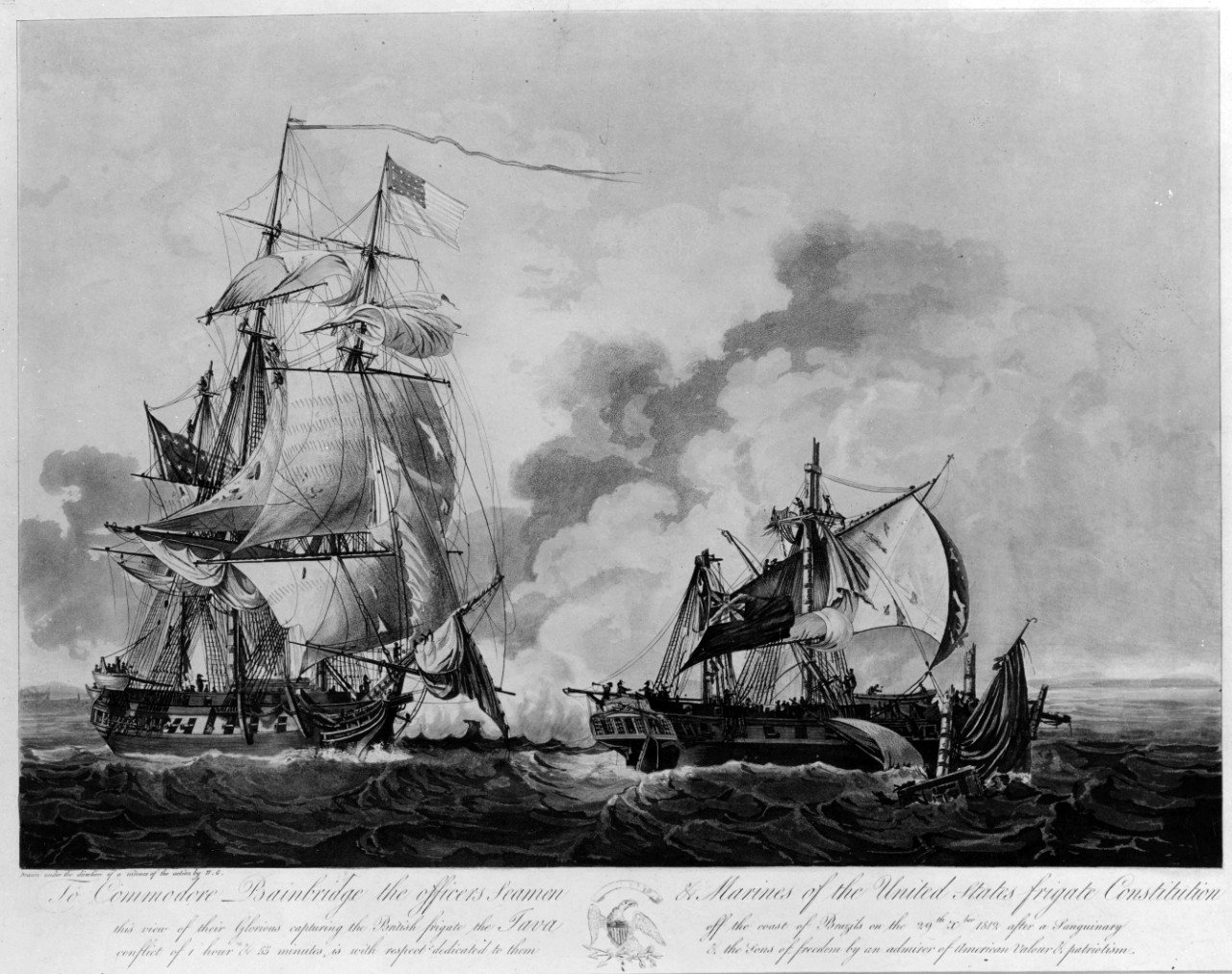 On December 29, 1812, the frigate HMS Java was on its way to India when it met the Constitution off the coast of Brazil. Although Constitution lost her wheel early in the battle, she was able to maneuver with her sails alone into position to fire on Java. After two hours Java surrendered and had to be burned. This American victory caused the Royal Navy to change its tactics: after this British warships had orders to flee American frigates when sailing alone. 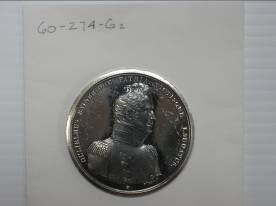 This silver medal bears the image of Commodore William Bainbridge. On March 3, 1813, Congress issued medals to the captain and commissioned officers of Constitution in honor of their victory over HMS Java. A silver medal like this one would have been given to the lower-ranking commissioned officers of the Constitution, and was cast of the same mould from which Commodore Bainbridge received a gold medal. Reusing the same mould saved a great deal of time and expense.

Constitution versus Cyane and Levant 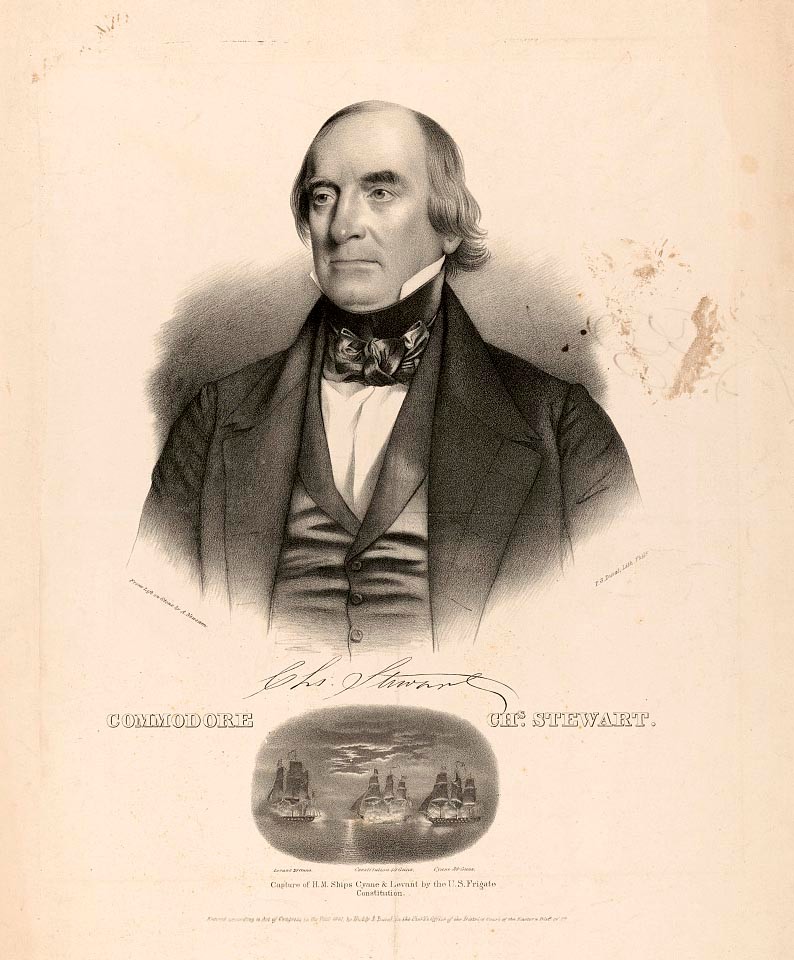 Charles Stewart served as captain of the frigate Constitution from 1813 through 1815, having previously commanded Argus, Hornet, and Constellation. During that time he defeated three British warships and captured five merchant vessels. This portrait celebrates his victory in an engagement with two smaller British warships, both of which he captured.

On February 20, 1815, near the mid Atlantic, unaware that the Treaty of Ghent had been ratified in Washington, D.C. three days earlier, Constitution under Captain Charles Stewart encountered HMS Cyane (22-gun sloop-of-war) and HMS Levant (20-gun sloop-of-war). The three battled by moonlight and Constitution, fighting both simultaneously, defeated first Cyane then Levant. A notable highlight of his battle occurred when Captain Stewart ordered Constitution to be sailed backwards in order to avoid being raked by Cyane. 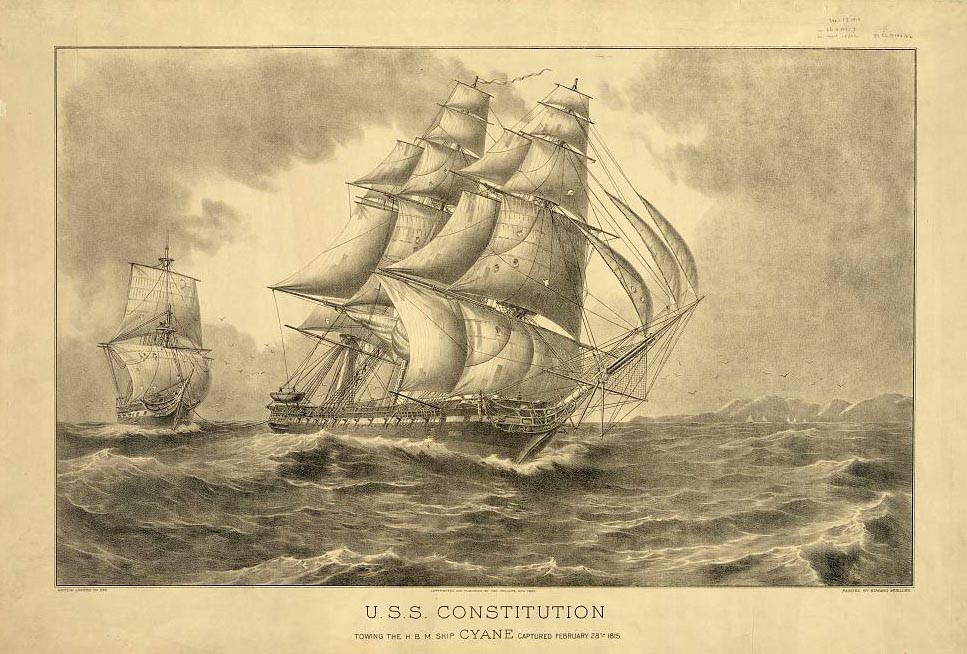 Constitution towing HMS Cyane.   Lithograph, circa 1918.  Courtesy of the Library of Congress, LC-DIG-PGA-03057.

After defeating HMS Levant and HMS Cyane, Constitution was escorting the two ships to the United States when they ran into a British squadron. Captain Steward ordered the prizes to separate to avoid being overtaken together, and the entire British squadron chased Levant, soon to retake her. Before battling Cyane and Levant, Captain Stewart had taken six other vessels as prizes. 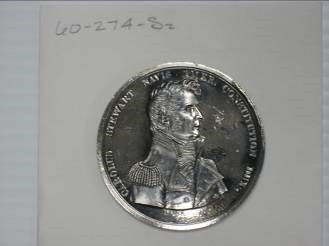 Issued by Congress on February 22, 1816, to the captain and commissioned officers of Constitution, in honor of their victory over HMS Levant and Cyane, these medals portray Captain Charles Stewart on the face, with a depiction of the battle on the reverse. A silver medal like this one would have been given to the lower-ranked commissioned officers of the Constitution; cast of the same mould as the gold medal Stewart received. To save money, all medals from a naval victory were cast from one mould. 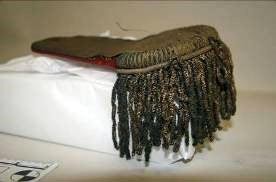 During her eighty four years of active oceangoing service USS Constitution was never defeated, and her victories became emblematic of the United States’ attainment of independent and sovereignty. 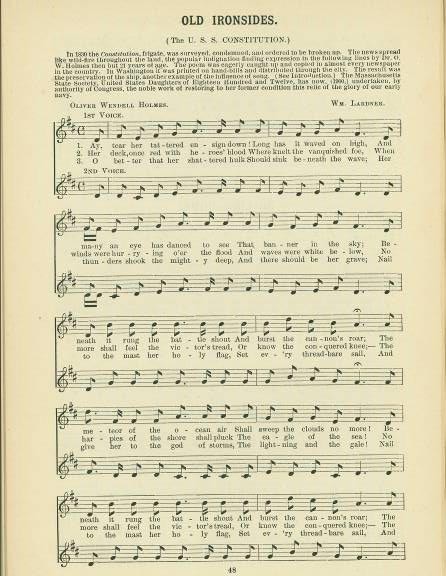 Written by Oliver Wendell Holmes and first published in the Boston Advertiser in 1830, two days after an article falsely reported that Constitution was set to be scrapped, this poem epitomized American feelings of pride in and affection for ‘Old Ironsides’. The ship who won so many battles in the War of 1812 had become a prized national symbol. 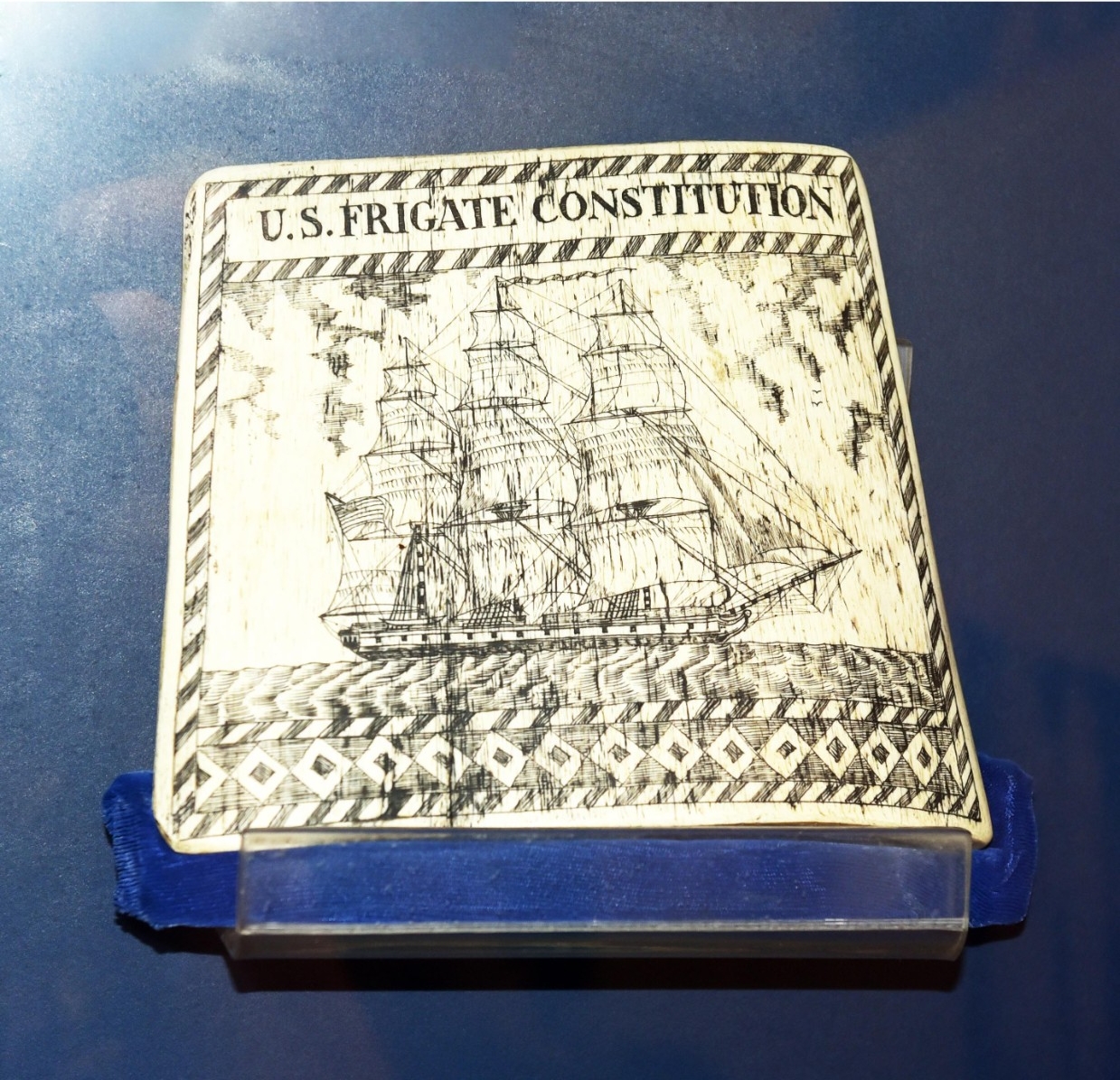 This scrimshaw (etching on whalebone), made by an unknown artist, depicts USS Constitution under full sail. 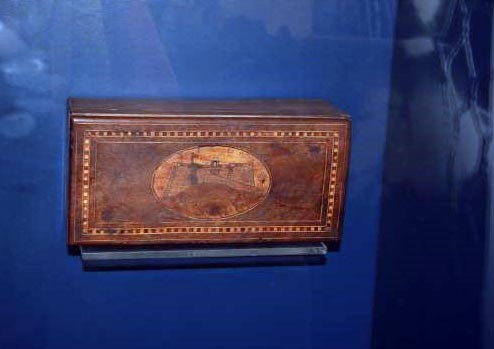 This box was made by Bob Carell using wood from the rudder of Constitution. The inlay work represents Fort McHenry in Baltimore, another symbol to emerge from the War of 1812 after Francis Scott Key wrote “The Star Spangled Banner” about the battle that took place there. 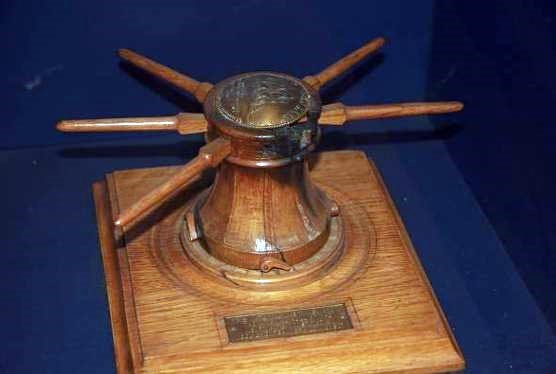 This model capstan is made of wood from the hull of Constitution. A capstan is a winch used for hauling great loads. Aboard Constitution, the capstan was used for weighing anchor, warping the ship (moving it by ropes instead of wind), and setting or taking down masts and spars. More then one hundred men were required to operate the capstan; most would heave its massive bars as they walked in a circuit around the drum. 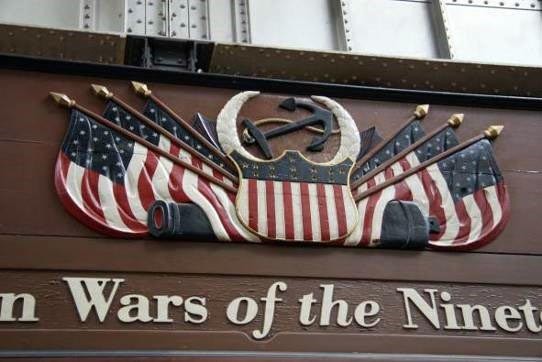 The headboard of a ship was a decorative piece to help identify, and was found by the ship’s “head”, or the forward-most end of the hull. The name of a ship was also found in large lettering on the transom, which was the flat end at the back of the ship. Despite these identifiers, warships of the age looked so alike beyond a short distance that ships like Constitution approached all strange vessels warily, ready to fight or run. 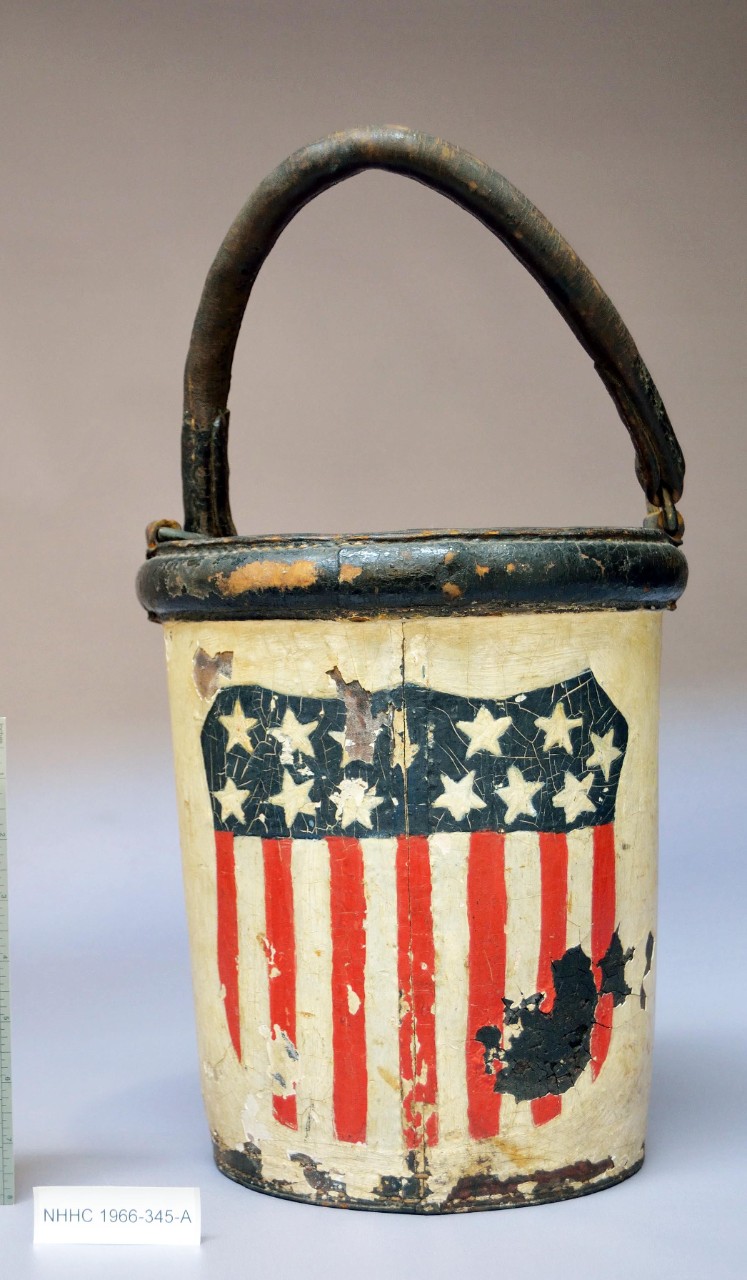 This leather powder bucket, also called a pass box, is marked “Washington Navy Yard, 1802”, and was used on the frigate Constitution until the ship was rebuilt in 1927. Powder buckets were used to carry pre-measured, cloth-wrapped charges of gun powder from the powder magazine to the guns above. The heavy leather protected the charges from accidental ignition. To avoid fires during battle, powder was carried up to the guns only as needed by young boys called powder monkeys. These boys were often targets for snipers because without their efforts gun crews would soon be unable to fire. 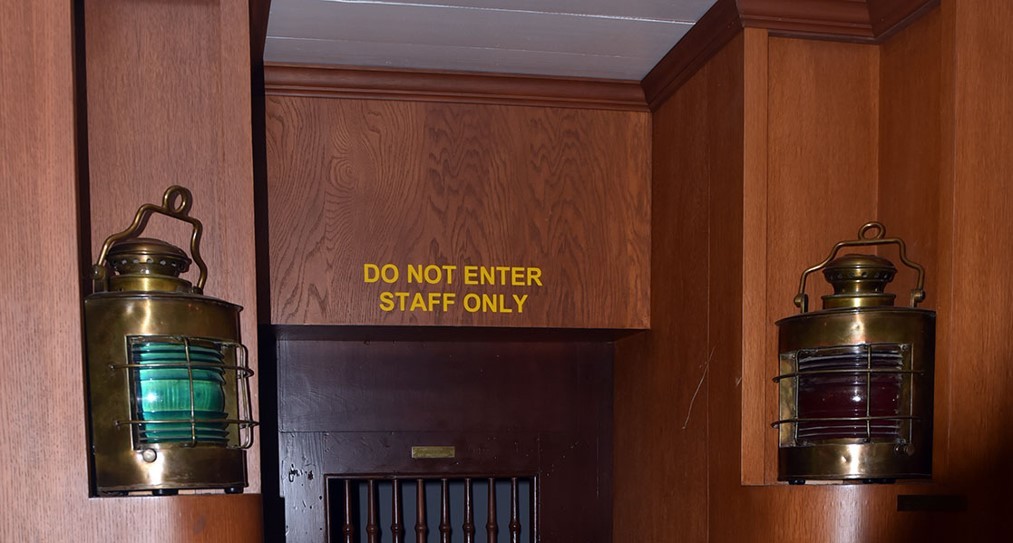 Beginning in the middle of the 19th century, sidelights such as these were required to be visible on ships under sail from sunup to sundown. By convention the red light took its place on the port side (known as the larboard side in 1812) while the green light hung on the starboard side. In conjunction with other navigational lights aloft, they disclosed the position and orientation of a vessel otherwise invisible in the dark, helping to prevent collision. 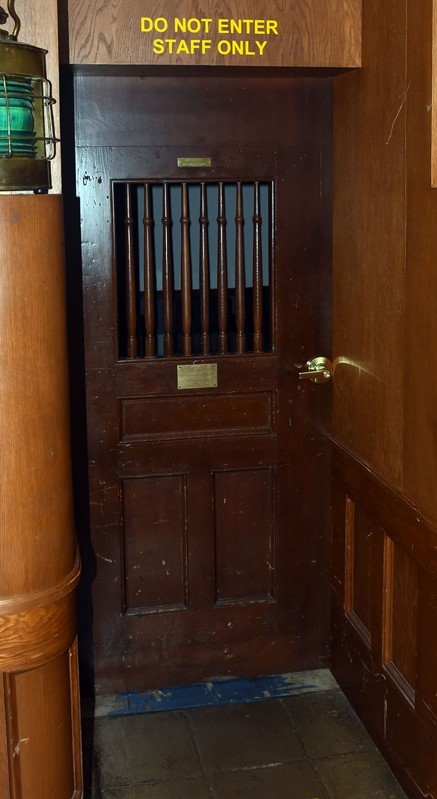 This door was removed from USS Constitution before 1936 – probably during her 1927 refit. Walls and doors within a wooden warship became another potential source of splinters, which produced a large part of the casualties in battle. Upon sighting a strange sail, a ship like Constitution “beat to quarters”; all unnecessary partitions and equipment were removed to the hold, while the crew unsecured and readied the ship’s weapons, and laid out equipment for dealing with casualties, fire, and battle damage.. 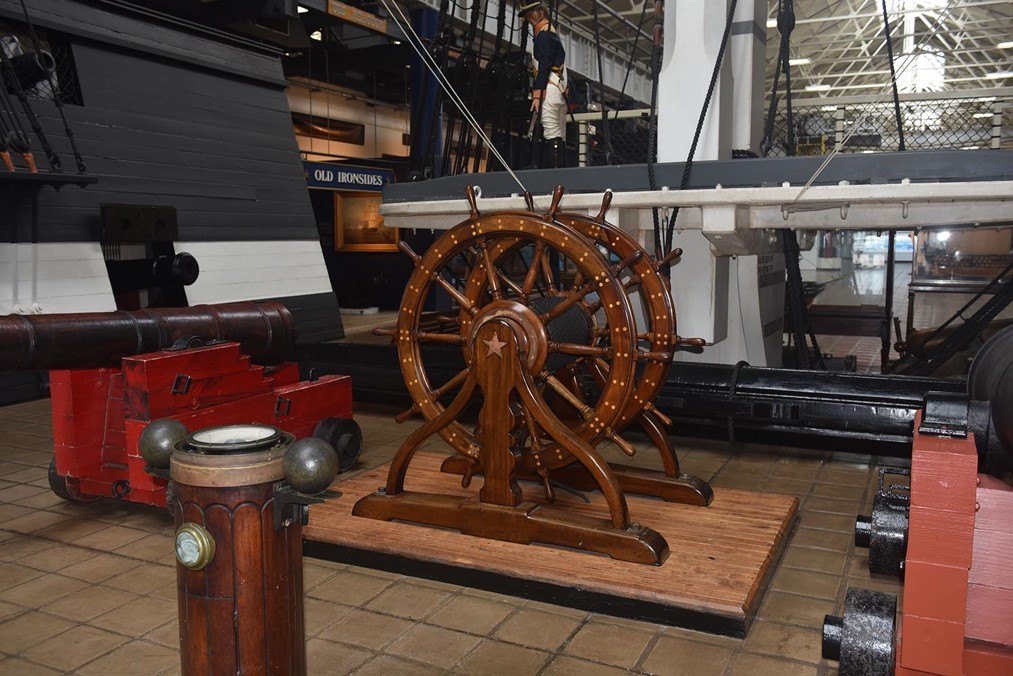 Large ships of the time were guided by wheels such as this one. A heavy rope wound around the axel connected the wheel to a long lever below decks called the tiller, which was connected directly to the rudder. In rough seas the force of water acting on the rudder was great, presenting a real hazard; having two wheels allowed more men (from two to four) to hold the wheel and keep it under control.

One effect of the U.S. Navy’s exploits during the War of 1812 was to lend credibility to the United States abroad. During a time when the British nearly controlled the world’s oceans, U.S. warships maintained a presence for the American flag overseas. Arguably the most successful American warship, the frigate Constitution, greatly contributed to this effort, and made a lasting name for herself in this nation’s history. Though Constitution was by far the most successful frigate of the United States Navy, she was not the only one to win notable victories.